Comics publisher AWA Studios has attracted a bevy of talented creators of late, from Mark Russell (Superman: Space Age) to Garth Ennis (Preacher). And now you can add to the list writer Daniel Kraus, already having worked with the company with Year Zero: Volume 0 and forming a tight collaboration with AWA. This January, Kraus will help add to AWA’s library with Trojan #1, focusing on a world filled with mythic creatures that have been marginalized by society. Kraus uses Trojan to explore such issue as bigotry, racism, and social inequality, and, judging from the first issue, the series will be equal parts gripping and heart-wrenching.

I spoke with Mr. Kraus recently about the idea behind Trojan, some of the characters readers can expect to meet in the series, how researching the darknet helped in shaping his tale, and why AWA Studios is a perfect fit for the story he’s creating. 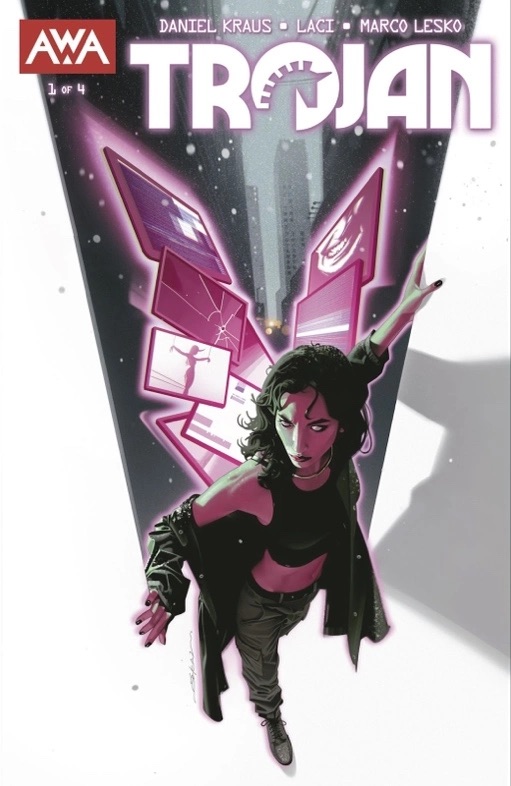 FreakSugar: For folks who might be considering picking up the book, what is the concept of Trojan?

Daniel Kraus: The idea is that mythological creatures–called “Legends”–exist among us, but they have been scuttled off to the fringes of society, essentially treated like homeless undesirables due to how their essential goodness shoved our essential badness in our faces. Now, one of these Legends wants to willingly volunteer to die in a snuff film run by a darknet figure who kills Legends on camera for the enjoyment of the rich. Her motives, though, are not what they seem. It’s dark subject matter, but we live in a dark world.

FS: There is such a robust cast introduced in the first issue. What can you tell us about the characters we meet?

DK: You can drill it down to three major characters. Nessa, the faerie who wants to enlist in a snuff film; Dirk, the darknet hacker she blackmails into helping her; and Kaapo, the figure who runs the snuff site. They all get involved way over their heads and build alliances and empathies they didn’t expect. Oh, there’s also a ferret named Nakamoto. I know the comics world was clamoring for a ferret. 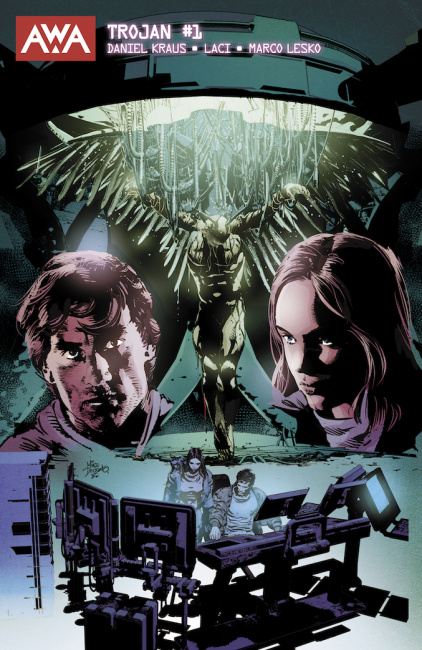 FS: The mix of magic and legends and the real-world setting make for an interesting narrative. What drew you to this subject matter?

DK: Snuff films as a phenomenon have interested me all my adult life. I tried to crack a novel about them for a good decade. Then I was talking one day with AWA‘s Axel Alonso, and he mentioned that he was interested in the same subject. That’s when everything finally clicked. When I thought about snuff films as a comic, rather than a novel, it opened me up to thinking about incorporating genre elements. It all came together in a matter of minutes after that.

FS: Following up on that, what kind of research did you do in crafting the tale of Trojan?

DK: There was some research into mythological creatures, but most of my time was spent learning about the darknet, how it works, the tricks of accessing it, and what you can find there. It’s pretty shocking. When I write in the comic that you can hire hitmen on the darknet, I’m not kidding.

FS: Are there any particular stories or legends that you gravitated toward or inspired you when drafting the story?

DK: Not really. I wanted to stay away from most of the stuff people associate with mythological creatures. I wanted to treat them as normal parts of society, parts that we would actually prefer not to look at, like homeless people. The idea with Trojan was to talk about how we have lost stories and legends. 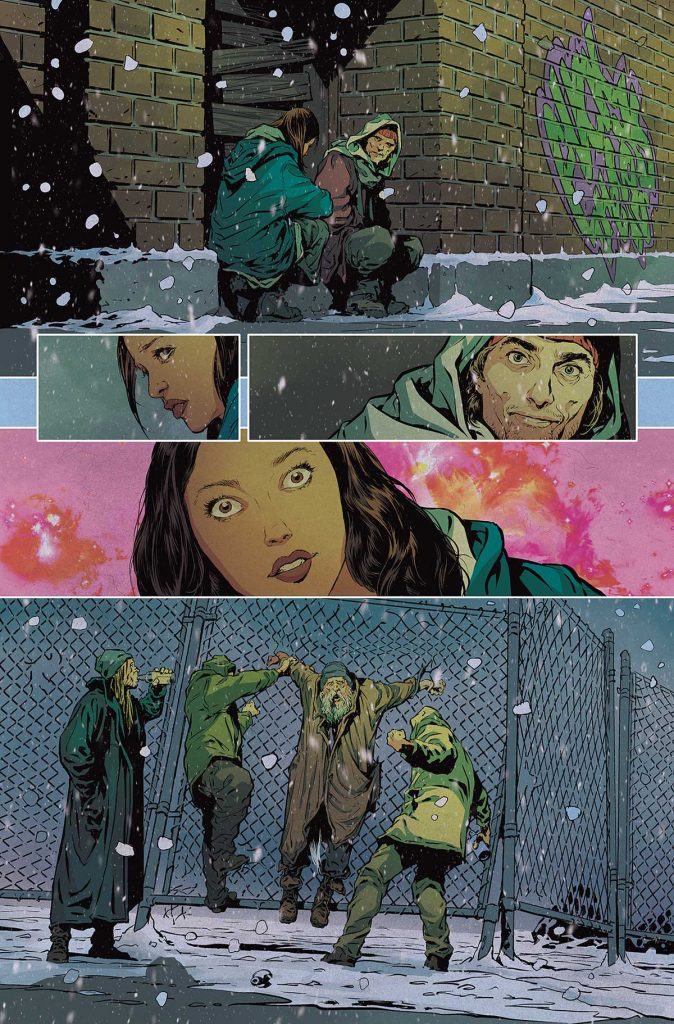 FS: The metaphors of racism and intolerance are well executed in the first issue. What made you want to take this slant in approaching the mythic creatures and their interactions with humanity?

DK: It just felt right given what’s going on in our world. People hate communities that are different from them. If mythological creatures showed up today, or beings with powers like Superman, we wouldn’t embrace them. We’d fear them.FS: The book is simply gorgeous and has such a lived-in feel. What is the collaboration like with the creative team?

DK: I’m thrilled to say that I have not needed to be very hands-on past the writing stage. Laci is just killing it with the art. Every time he sends pages, I show them to whoever I’m with at the moment. Marco Lesko‘s colors are incredible, and Sal Cipriano is nailing the lettering. I’ve mostly been able to sit back and just be awed.

FS: What has made AWA such a good fit for what you’re doing with Trojan?

DK: Trojan is a harsh book. It really “goes there,” you know? It’s horrific in a way that most straight-up horror books never touch. So it required a courageous publisher. After working with AWA on Year Zero: Volume 0, I had a lot of confidence in them.

FS: Is there any other work that you would like to discuss that you have in the works?

DK: In Summer 2023, my novel Whalefall comes out — it’s my favorite book I’ve written. It’s a 100% scientifically accurate survival thriller about a scuba diver who is swallowed by a sperm whale and has one hour of air to get out. What it’s really like inside a whale is pretty mind-blowing.FS: Is there anything you can tease about what we can expect to see in Trojan going forward?

DK: Twists, definitely. Shocks, too. There’s something about putting creatures you usually only see in high fantasy into a gritty metropolitan world that’s like throwing teddy bears into a garbage disposal. It’s constantly startling.

AWA Studios, the independent developer of bold and relevant stories from the world’s most outstanding artists, writers, and artisans, announced today the release of TROJAN, a 4-issue original story debuting on January 4, 2023. From New York Times best-selling writer Daniel Kraus (The Shape of Water, George Romero’s The Living Dead) and acclaimed Serbian artist Laci (SHERLOCK HOLMES, GHOSTED), the new 4-issue series is a mix of fantasy and horror by way of modern tech.

A world of wonder and horror in equal measure, TROJAN creates a parallel universe in which creatures from myth and legend live among us, just trying to get by like everybody else. But it’s a world in which sinister urban legends, like live deadly shows for dark web high rollers, also exist. With an intense script and vivid characters, TROJAN’s unique world spans, blends, and elevates genres in this dark fantasy tech noir.

Series writer Daniel Kraus explained, “I’ve always wanted to do a story on snuff films, or at least the modern equivalent, as I think the concept really digs into humanity’s darkest desires. I spent a good decade trying to crack the story but couldn’t until I happened upon the idea of the victims being mythological creatures. They are so often portrayed in fairly distant, magical terms. I wanted to get visceral with them. Destroying them felt like a dismantling of hope. This is a very dark series that doesn’t look away from its subject matter. Buckle in.”

When a mysterious young woman, Nessa, enlists the help of a hacker to take a tour of the grisliest corners of the Dark Web, she sets in motion a war between those who peddle to mankind’s darkest fantasies and a world that transcends imagination. As the story progresses, readers come to find that Nessa isn’t the benign faerie she appears to be — she is something much, much more, and she’s about to hatch a scheme that will shock those who would prey upon her people.

“Daniel Kraus is a master of horror and one of the best in the genre,” said Axel Alonso, Chief Creative Officer of AWA Studios. “At AWA, we love establishing a strong rapport with our talent and we were thrilled when Daniel signed on to create a second series after YEAR ZERO VOL. 0. Plus, Laci is an absolute legend who’s work we’ve admired for years. We’re thrilled with what this team produced for TROJAN and can’t wait to see how readers respond too.”

TROJAN artist Laci added, “Mythological creatures are great material for visual interpretation, and the idea is to make these creatures as realistic as possible. It was very important that we expressed deep empathy in TROJAN. The world of legendary creatures is harmonious, regardless of how huge their differences to one another in mythological appearance and origin are. I dare say that it is the very backbone of this series.”

TROJAN is written by Daniel Kraus, illustrated by Laci, colored by Marco Lesko (HIT ME), and lettered by Sal Cipriano (THE FLASH). Issue #1 will be available January 4, 2023, both digitally and in stores wherever comic books are sold, with the following issues available on a monthly basis. For more information on TROJAN and other content, visit AWA Studios on Facebook, Twitter, Instagram, YouTube, and AWAStudios.net.

The Eisner Award-winning graphic fiction publisher and entertainment studio, which sold its millionth comic this year, was founded in 2018 by alumni of Marvel, DC, NBA, Fox, Hulu and MTV, with former Marvel Editor-in-Chief Axel Alonso, serving as Chief Creative Officer. Armed with some of the freshest and most critically acclaimed graphic fiction in a generation, AWA has established itself as an industry leader in terms of its relationship with artists and writers by providing creators the freedom, incentive structure and editorial support to pursue their boldest, most original, and socially relevant work. AWA has assembled a lineup of the world’s most renowned comic book talent, including such creators as Frank Cho, Mike Deodato, Garth Ennis, Christa Faust, Al Madrigal, Mark Russell, J. Michael Straczynski and many more. With the formation of AWA’s Film & TV Studios, the company is building a distinct array of new cutting-edge film and TV projects anchored in its burgeoning library of groundbreaking stories. Helmed by Hollywood veteran Zach Studin, AWA Studios recently announced its first project, Chariot, an event feature film, based on the AWA graphic novel by Bryan Edward Hill that Warner Bros. secured after competitive bidding for Top Gun: Maverick helmer Joseph Kosinski to direct, with 21 Laps producing in partnership with AWA. In Television, AWA Studios recently announced a strategic partnership with Fremantle for scripted dramatic TV. AWA is backed by Lupa Systems, SISTER and Lightspeed Venture Partners.