Ah, gym class: a veritable minefield filled with shy, awkward interactions, attempts at making one’s arms and legs do various exercise regimens, and bouncing, rubber balls flying at your face. That’s right: we’re talking dodgeball. Whether you’ve only seen games of dodgeball played from afar or you have been personally involved in this game of ducking and dipping and dodging, the game is a perfect metaphor for life, especially being a teenager: we’re all just trying to get through it without too many bruises.

Writer Josh Trujillo and artist Cara McGee know this, and they’ve mined the sport for laughs, drama, and romance in their newest comic series Dodge City, on sale now from Boom Studios’ Boom Box imprint. In Dodge City, we follow Tomas as he joins the Jazz Pandas, a dodgeball team that is wary of Tomas’ skill but willing to give him a go based on his raw talent.

Mr. Trujillo and Ms. McGee spoke with me recently about the conceit of Dodge City, their personal experiences with the sport, and the rollercoaster of emotions we can expect to see in the series. 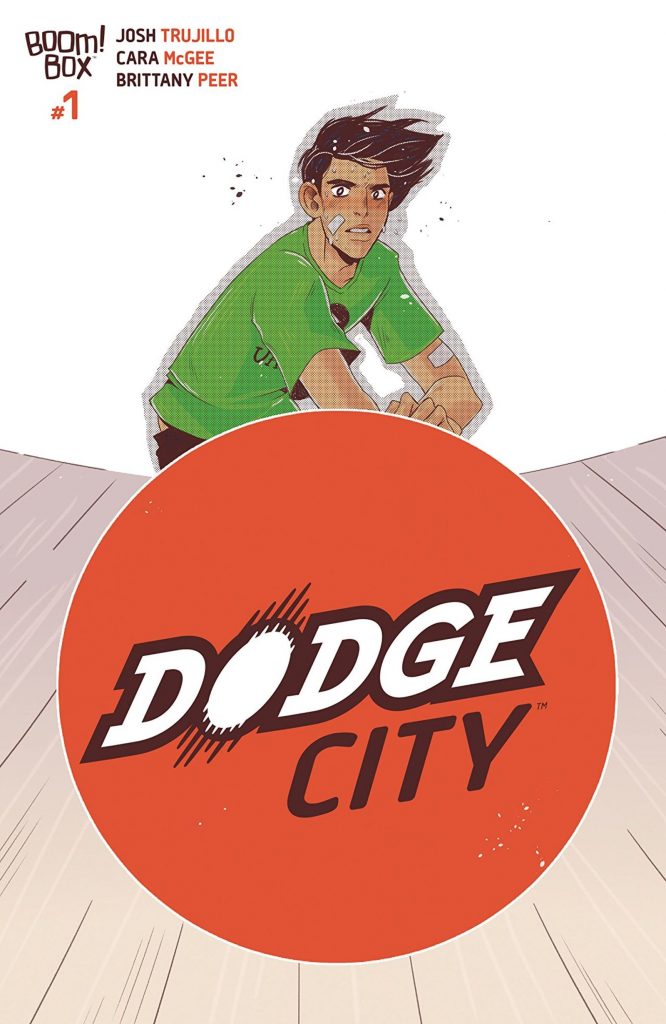 FreakSugar: For folks considering up the first issue, how would you describe the conceit of Dodge City?

Josh Trujillo: Dodge City is a sports comedy about kids finding confidence in a chaotic world. It’s about friendship, and teamwork, and learning to be a part of something bigger than yourself for the first time. And it’s funny, I swear!

Cara McGee: Teens dealing with problems while being awesome and real, and also hitting each other with giant balls!!

FS: While I never competed on a dodgeball team in grade school, the first issue did bring back memories of playing the game in gym class. How did the idea of Dodge City first come about?

JT: I played in a competitive dodgeball league in Los Angeles for years. I’ve been on the worst teams, and (when I’m lucky) the best. It’s such a wild, unexpected game that I knew would translate well to comics with the right artist. But more importantly, dodgeball provided me friends in a new city where I hardly knew anyone. Sports and games do that, and I don’t think that’s explored enough.

CM: I grew up reading lots of manga, including sports series like Eyeshield 21 and Slam Dunk, so a lot of my panels and pacing are heavily influenced by that, while feeling bright and loose and young. I want the pages to look as fresh and stylish as the Jazz Panda’s themselves! 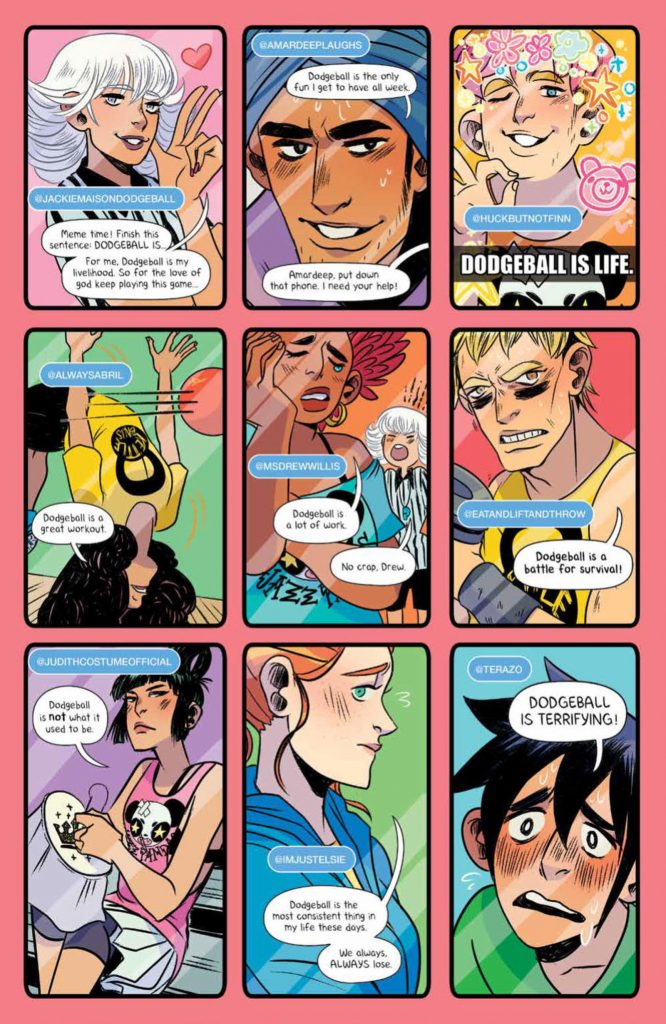 FS: The book is unrelentingly fun and kinetic. How did you decide on what you wanted the look of the series to be?

JT: Cara blew me away with her first set of character designs, and I can’t overstate how much she has brought to our story. The dodgeball games I played in were VIBRANT. They had costumes, music, props, even choreography at times. Dodgeball is like nothing else and she’s captured that so well.

CM: As far as their looks go, I already have a habit of following fashion blogs and picking up magazines anyway, and I’ve had a great time coming up with looks and styles to fit each character. I want each individual to have their own obvious, unique style because, after all, they ARE young adults.

FS: I worked in education for years and the voices of the main characters have an authenticity to them that really works. Is there a particular mindset you delve into when guiding young adults in a story like this?

JT: Maybe I’m just immature? There’s something great about writing young characters, because they have this naivety that as an adult reads as dumb. It’s all big emotions, big drama, and big mistakes. I can relate to that.

FS: Following up on that, the first issue has the feel of a young adult novel, but in serialized form. Was there any focus on that when first crafting Dodge City?

JT: Dodge City is definitely broken up in a specific way. Cara and I grew up on manga and anime, and sports manga is one of the best things there is in life. I would say stuff like The Prince of Tennis, Slam Dunk, Dragon Ball, or even Ngozi Ukazu’s Check, Please! were the real influences.

FS: Dodge City seems to be a perfect fit for Boom!’s Box imprint. How did it ending up landing with the imprint?

JT: I was lucky enough to write a series of Adventure Time graphic novels, to which Whitney Leopard was my editor. I initially though Dodge City would work best as a story about children, and that pitch didn’t go far. However, Shannon shared an office with Whit and was interested.

She asked if I’d be open to making the characters older teens, to open it up to more mature stories. I love how the Boom! Box line takes the risk of focusing on sports that don’t get much attention, but are just as cool. 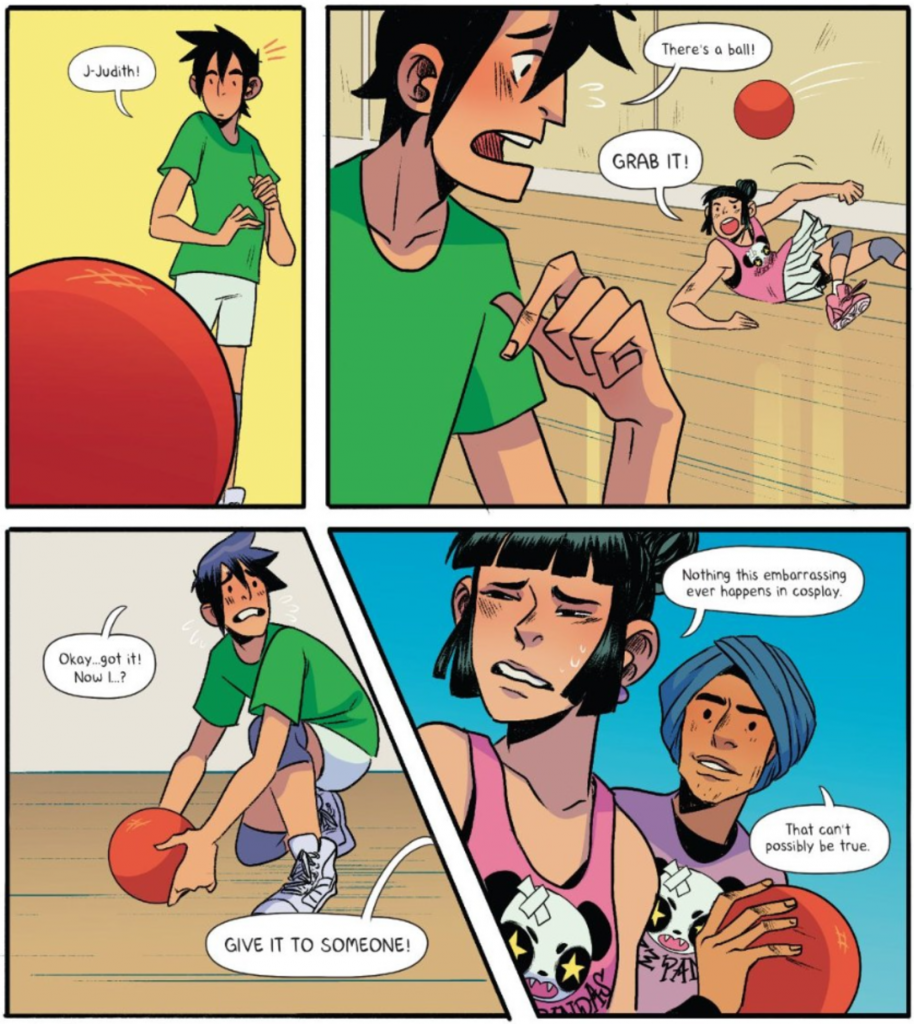 FS: So, I have to ask: What are your experiences with dodgeball in school? I was always just okay. Never picked first, not last, just good enough to stay in play for a little while.

JT: To be honest, dodgeball was something I picked up as a manchild, rather than a child.

CM: I never played in a team or competitively, but I do have fond memories of playing in grade school! It really is the type of sport where athleticism doesn’t make or break a team, a lot of it’s down to luck, and honestly, it’s just plain FUN.

FS: Is there anything you can tease about what we can expect moving forward in Dodge City?

JT: Shocking revelations from the history of Jazz Pandas, romances blooming in all sorts of unexpected directions, and the most intense dodgeball tournament you’ve ever read about!

CM: We’ve got some smooches coming, and even more cute boys in short shorts!

From the official issue description of issue 2:

Tomás is no longer the newest player on the Jazz Pandas, and with another teammate they stand a better chance of making it through the season, if they can manage not kill to each other first!