With their successful Kickstarter campaign to publish their deservedly lauded graphic novel BLACK, co-creators Kwanza Osajyefo and Tim Smith 3 examined a world in which only black people had superpowers. Not only did their story provide a bevy of avenues to discuss what’s being reflected in the real world, but the duo’s rich comic provided a wealth of storytelling opportunities to further explore their universe.

This year, Osajyefo and Smith 3 intend to do just that, with two spinoff titles hitting this year. First up is BLACK [AF]: America’s Sweetheart, debuting in comic shops this Wednesday from Black Mask Studios. In America’s Sweetheart, Osajyefo and artist Jennifer Johnson follow Eli Franklin, an altruistic young woman with superpowers she wants to put to the fight for good despite the fear and negativity she might face. 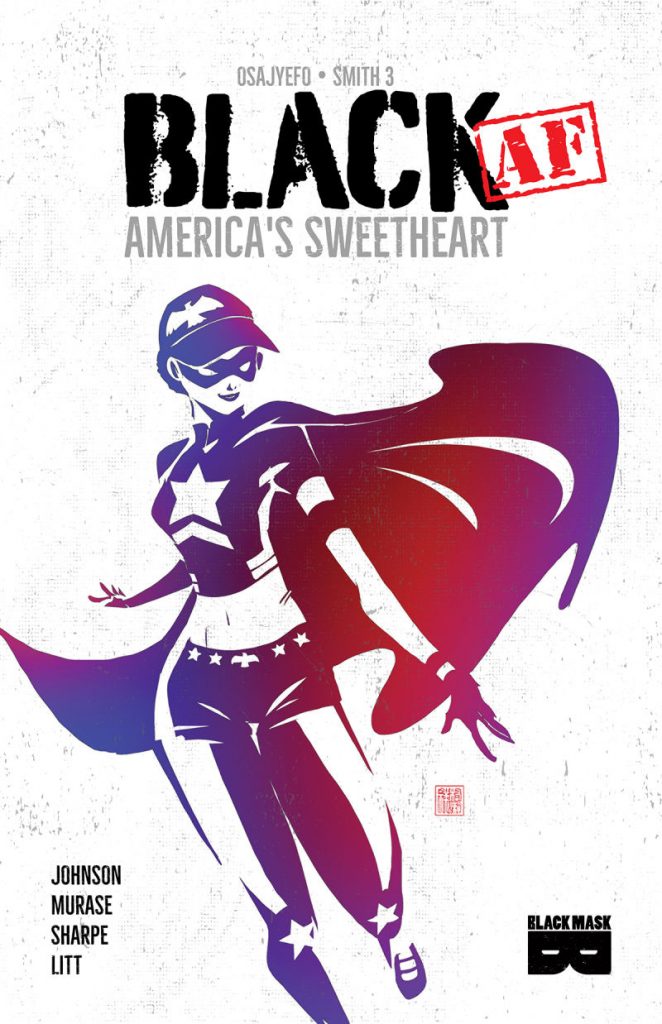 FreakSugar: For folks coming into BLACK, how would describe the world you’ve created?

Kwanza Osajyefo: I think the logline sums it up pretty well: In a world that already hates and fears them, what if only black people had superpowers?

FS: What can you tell us about the conceit of Black [AF]: America’s Sweetheart?

KO: The story is about Eli Franklin, a young woman who was, as an infant, adopted by a white, conservative, religious family and has had superpowers her entire life. She thought she was unique in that regard, until the events of BLACK unfold.  America’s Sweetheart takes place after these events, so she’s now navigating a world where other black people have powers and people are scared.

Eli is this intrinsically good person and very much believes in this idealized version of America, to the extent that she dons a patriotic costume and goes off the become the world’s first superhero. The struggle she faces is whether, despite her altruism, the world willing to accept her? 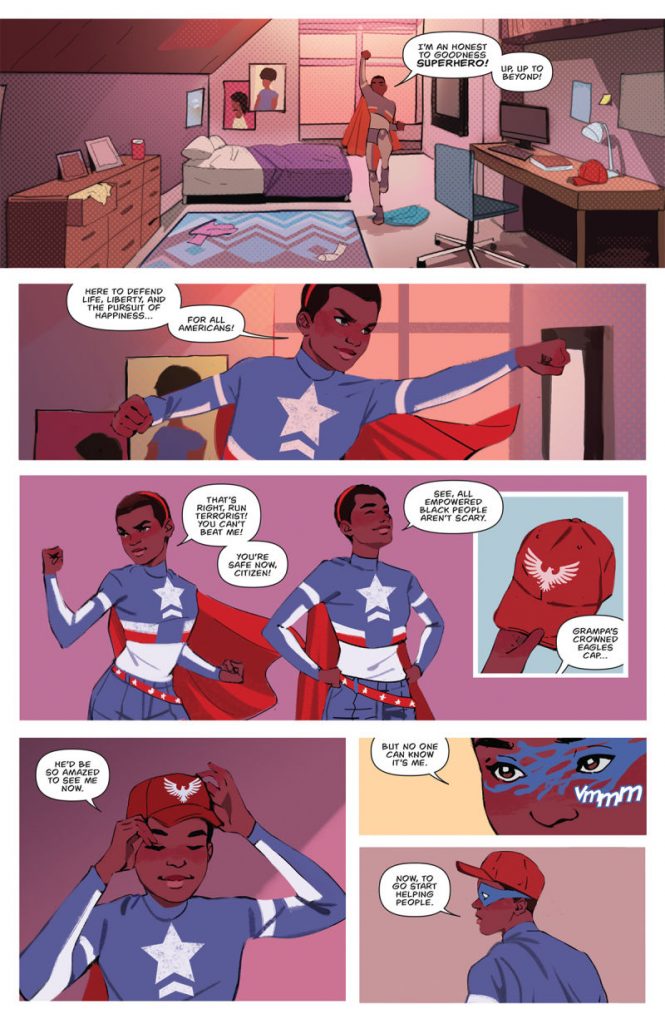 KO: It was a personal challenge to myself as a writer to shift tones from the mature themes in BLACK to a more YA approach in America’s Sweetheart. I felt it was appropriate to the sort of story that this is, but also wanted to maintain the contextual relevance that we’d already established.

FS: The focus of America’s Sweetheart is the character of Good Girl and her journey, her desire to use her powers for good in a sometimes unreceptive world. What were some of the influences, both in terms of personality and design, behind Good Girl?

KO: I was definitely influenced by the character Icon from Milestone as this superhero archetype who also held conservative values. Eli’s perspective was part of wanting to continue showing that blackness isn’t this monolithic worldview and that a phenomenon like superpowers would impact people differently.

There was also the idea of creating a character who is intrinsically good, and wants to help, but is operating in a rather cynical world. 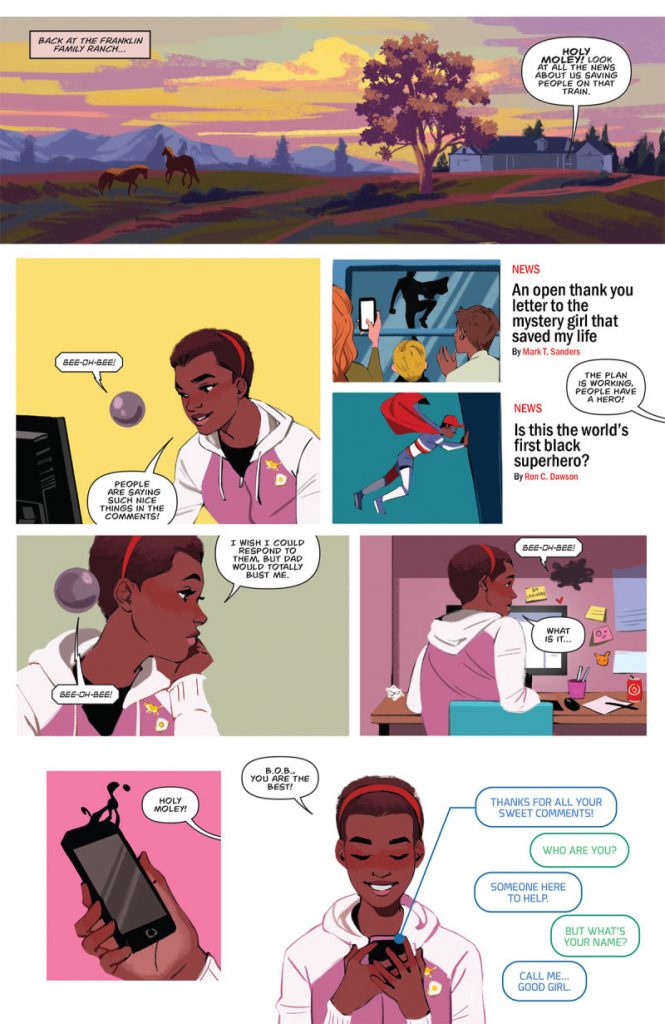 FS: How you incorporate the concept of focus groups and Good Girl’s perception on social media and beyond were nice touches and felt very real to what might very well happen in a world of superheroes. What are some of the most uplifting responses you’ve received from your work in the world of Black that made you smile?

KO: Anytime young people tell me how much the work means to them, I beam. As a young comics fan, it was seeing and reading stories featuring characters who looked like me and had similar problems and could relate to my experiences that influenced my career in comics.

I appreciate all our readers but those are the ones who personally inspire me to continue.

FS: The problems of racism that you address in BLACK are systemic and have existed for centuries. That said, has how you approach the work changed at all in the age of Trump, a president who almost seems to tacitly—or explicitly—condone xenophobia and racism?

KO: Very slightly. We launched BLACK during the Obama presidency and I admit there were times I wondered if were moving towards a place where these topics would be less and less relevant.

Of course we’re seeing a gross regression of civility that’s clarified we’ve not properly addressed racism as a society. So unfortunately, what Trump has stirred up makes BLACK even more relevant. 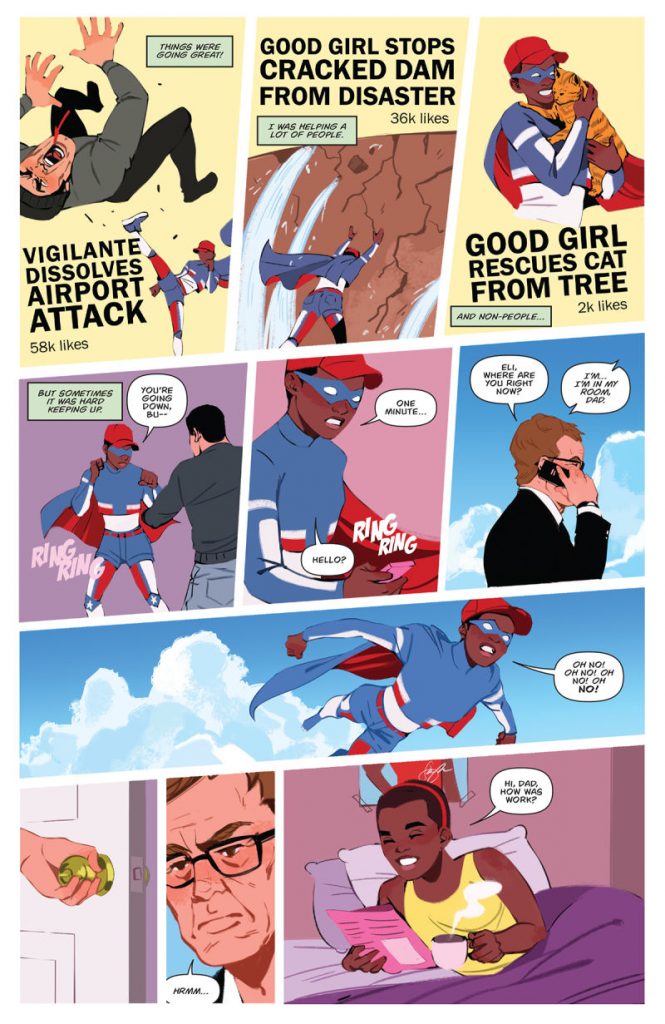 FS: Beyond enjoying the book, what do you want readers to take away after reading America’s Sweetheart? Are there lessons you wanted to impart that you couldn’t stress because of the tonal differences in the first and second volumes? (Meaning, does the tone of America’s Sweetheart make certain takeaways easier to impart?)

KO: I think BLACK [AF]: America’s Sweetheart is fundamentally about hope and the value in being a good person even in the face of cynicism. And not just by words but in action, which is even tougher.

FS: What can we expect next from the world of Black?

KO: The next story in the BLACK [AF] will debut in April titled Widows and Orphans. It explores human trafficking and what empowered people would be sold for on a black market — oh, and ninjas.

January 18, 2018) Having taken the publishing industry by storm with a widely popular Kickstarter campaign for their acclaimed comic book, co-creators Kwanza Osajyefo and Tim Smith 3 are publishing two new titles set in the world of BLACK, their controversial comic that asks “in a world that already fears and hates them, what if only Black people had superpowers?” The progressive, Los Angeles-based indie publisher Black Mask Studios will publish both of these new projects in early 2018, the first of several planned BLACK spinoff titles.

On sale timed to Black History Month, the original graphic novel BLACK [AF]: AMERICA’S SWEETHEART introduces America’s first superhero, a black teenage girl. Though Eli Franklin’s friends and neighbors in rural Montana think of her as a typical 15-year-old, she just might be the most powerful person on the planet. The adopted daughter of a government official, Eli sets out to give America hope as its first superhero, Good Girl, but soon discovers it may take more than donning a patriotic costume to lessen societal divides. On sale in comic book stores on January 31 and in bookstores on February 13, BLACK [AF]: AMERICA’S SWEETHEART is a stand-alone YA story that updates classic superhero tropes (an adopted child manifests incredible powers of super strength, invulnerability, and flight) to tell a bold, thrilling, and timely origin story for a new generation.

The book introduces artist Jennifer Johnson, who makes her graphic novel debut. “With superhero comic books rising to prominence, many stories have evolved to reflect modern ideals,” said Johnson. “AMERICA’S SWEETHEART embodies ideas of heroism, sacrifice, and empathy while reflecting on the world around us. Eli is a savior that we need and a character that many can identify with. In the wake of her powers, Good Girl harbors an uncompromising sense of justice and selflessness, unafraid to do what’s right for the greater good.”

“In this book, we wanted to show the breadth and depth of the world of BLACK and our flexibility to explore other genres within it,” said co-creator and writer Osajyefo. “Jennifer Johnson’s charming approach to the art allows us to tell a coming-of-age story that has a lot of dynamic action as well as social context.”

Following the publication of BLACK [AF]: AMERICA’S SWEETHEART, Black Mask Studios will publish the miniseries BLACK [AF]: WIDOWS & ORPHANS starting in April. The four-issue series will reunite BLACK co-creators Kwanza Osajyefo and Tim Smith 3, with Osajyefo  writing the series and Smith illustrating it. The series highlights Anansi, one of the characters introduced in BLACK, and marks the first BLACK series to be illustrated by Smith, who designed the characters that Jamal Igle illustrated in the first BLACK comics.

“Tim and I first came up with the concept of BLACK almost a decade ago,” said Osajyefo. “It’s a thrill to see these characters come to life through his art in the pages of this series.”

“Like the other titles, BLACK [AF]: WIDOWS & ORPHANS is no-holds-barred storytelling,” said Smith. “This story features Anansi and Hoodrat investigating a human trafficking ring that will take them across the globe and bring them face-to-face with dark pasts of abuse, child soldiers, and families torn apart. The series asks a genuinely disturbing question—in a world where only black people have superpowers, what price do they fetch on the black market?”

More BLACK titles are in development from the co-creators and Black Mask Studios.

About Jennifer Johnson. Jennifer is a game developer, designer, and illustrator from Toronto. She is fascinated with portraying otherworldly landscapes and strives to promote diverse voices in speculative fiction.

About Tim Smith 3 Co-creator and designer of BLACK, Tim Smith 3 (A.K.A TS3), has been working in the comic industry for over 15 years. He created and self-published Red After the Party, and has worked on hit titles for some of the biggest publishers in the industry! To see more of TS3’s work, check out: http://www.ts3art.com/.

About Sarah Litt Sarah Litt has been in the publishing industry for over a decade. She started at Penguin and later moved to DC/Vertigo, where she worked on graphic novels. She was later recruited to work with the DC Digital team in LA. Back in NY, she is currently an editor for The Princeton Review.