How do the reviews we post online—both positive and negative—affect real world people? For Sam, the protagonist of Leeanne “Mongie” Krecic’s LINE Webtoon webcomic Let’s Play, the consequences impact her in a hard way. After an internet gaming celebrity gives Sam’s debut game an unkind review, her path to being an indie game developer looks to be a treacherous one. In the meantime, the reviewer moves next door to her, adding another kink in the works.

Recently, a Kickstarter campaign was created to collect the first volume of Let’s Play in printed form for the world to see. Touching on a variety of topics from mental health to gaming culture, the Kickstarter will put the series in the hands of both fans of the series and new readers first being introduced to Let’s Play.

Mongie spoke with us recently about the conceit of Let’s Play, how the idea behind the webcomic come to light, the reason for the Kickstarter, and what she hopes readers get out of reading the webseries. 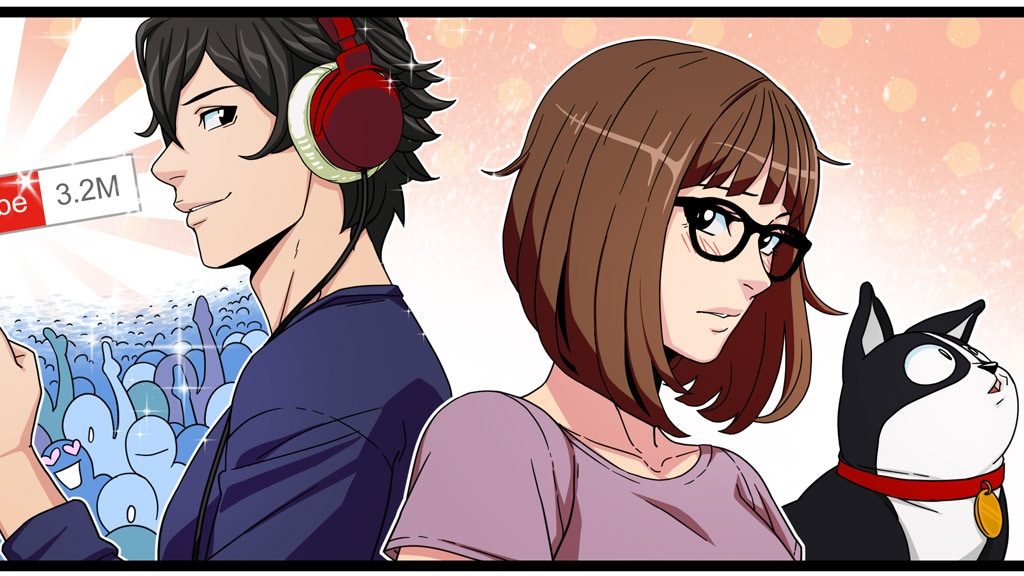 FreakSugar: Before we get into the Kickstarter, what is the conceit of Let’s Play Volume 1?

Leeanne “Mongie” Krecic: Volume 1 is the first 23 chapters of my webcomic Let’s Play, which is about a young woman named Sam, who works as a software developer by day and an indie game developer by night. In the first chapter, we learn that Sam’s first game, Ruminate, is reviewed by an internet gaming celebrity who goes by the name “Marshall Law.” Unfortunately, Marshall gives Sam’s game a negative review and posts the video online for his 3 million subscribers to see. As a result, Marshall’s fans ruin Sam’s online reputation, making her debut as an indie game dev a rocky one. By the end of the first chapter, we learn that Marshall is moving into the apartment next door.

The comic, which is a rom-com, focuses on gaming culture, working as a woman in a STEM field, life as an internet celebrity, and mental health.

FS: Following up on that, what was the genesis of the series?

LMK: I worked as a web developer for 11 years. While working, I often listened to “Let’s Players” on YouTube who played and reviewed games. One day, I watched a video from one of those YouTubers who was playing a fan-made game. Halfway through the game, they got so frustrated with the game that they rage-quit, followed by a long, critical lecture addressed to the developer via the video recording. After watching that video, I felt awful for the developer; especially being a developer myself. It was true that the game was rough, and needed a lot of polish, but it was probably their first game, and I doubted they suspected this famous YouTuber would even hear of their game, let alone play it. So I started to wonder what would happen if that developer met the YouTuber in person? Would the developer point out who they were? Would the YouTuber apologize? What would be the interaction?  That was the genesis of Let’s Play. A comic where those two people actually meet. 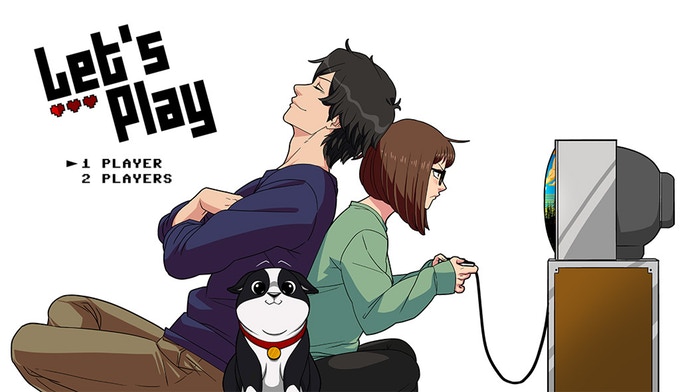 FS: The cast is diverse and incredibly fleshed-out. Can you tell us about the characters?

LMK: Sam is a young woman who suffered from poor health through most of her young life. As a result, she spent a great deal of her time playing video and computer games. As Sam grew older, she noticed how gaming was an excellent escape for others much like herself. As a result, she decided she wanted to become a game developer so she could create games for others to enjoy. Unfortunately, having lived such a sheltered life, Sam developed a lot of social anxiety and struggled with things like confrontation.

Marshall Law is a rising internet celebrity on a website called, “Viewtube.” He’s high energy and loves sharing a good laugh. He adores his fans and will often push himself past limits that are healthy to maintain his video upload schedule. As the series has progressed, we’ve learned that there may be more to the celebrity than what we originally thought, and that “Marshall Law” may not be his real personality.

Bowser, who is Sam’s pet dog, is a Corgi and Boston Terrier mix. He has a very close bond with Sam and will come to her aid when she’s in need. He hates squirrels, loves his little stuffed princess doll, and enjoys walkies.

Other characters for Let’s Play include a rock-climbing barista, Sam’s coworkers, the motley crew that is Sam’s MMO guild, and numerous other exciting characters.

FS: Following up on that, what are your influences behind the series?

LMK: My time as a web developer is a substantial influence behind the series. I was never a game developer, but I do have plenty of experience with computer logic and software development to have a conventional understanding of the process. Also working in a field that is a predominately male industry has sparked a lot of influence in the character Sam and what she experiences in her job.

I also grew up gaming — having learned how to read playing text-based games on the Commodore 64 back in 1985. Some of my fondest memories is playing SNES with my cousin, or beating Earthworm Jim on the Sega Genesis for the umpteenth time, or trying to get through Myst on the PC with my dad. I’ve also logged an embarrassing amount of time on MMOs that I’m afraid to run the check commands to learn the answer. 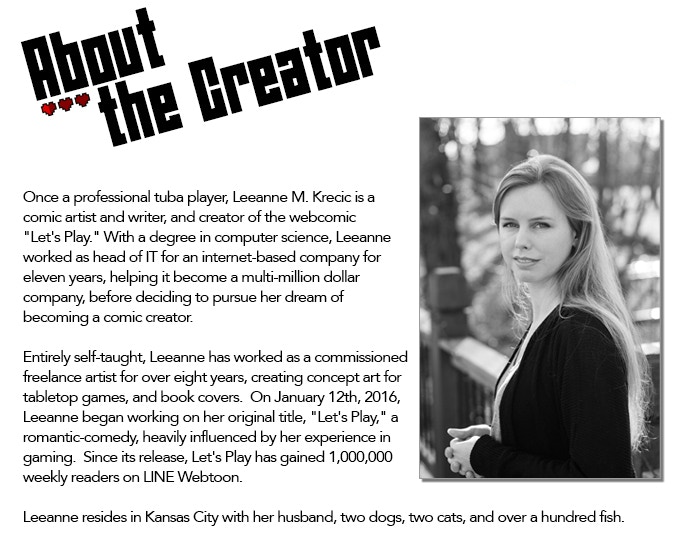 LMK: It has been outstanding! We were funded in under 3 hours, which I never expected and the fans have been so incredibly supportive! The success is all thanks to them, and we’re offering numerous stretch goals and rewards that I hope they love.

Let’s Play is still an ongoing series, with new chapters uploaded weekly to the site Webtoons.Initially, it’s formatted for vertical scrolling on an infinite canvas, aka smart devices. Therefore, the entire comic is digital, and we’re running this Kickstarter to allow us to put it into print. I enjoy reading both books and reading digitally — both serve their own purpose, but I know a lot of readers enjoy the experience of actually holding their comic in hand. That’s what this campaign is about.

FS: What rewards should folks expect from contributing to the campaign?

LMK: We’ve got a lot of exciting rewards! Of course, the book for starters. And stretch goals include additional prints, stickers, magnets, enamel pins, and bookmarks! The add-ons are made up of a coloring book, t-shirt, hardback covers, and a Bowser stuffed animal!

FS: Beyond being entertained, what do you hope readers take from Let’s Play?

LMK: Let’s Play touches a lot on mental health, and I hear from a lot of readers who are at a difficult place in their lives. They tell me that reading about my characters going through similar problems helps them understand that others are going through the same struggles. If anything, I hope my comic helps readers feel more comfortable talking about mental health and more open to the idea of asking for help when it’s needed.

FS: What is next for Let’s Play?

LMK: Since the Kickstarter has been going so well, we’re planning on running the Kickstarter for Volume 2 in the fall. The fans of Let’s Play have also been hounding me for games based on the series, whether it actually be Ruminate the game that Sam created, or a dating game that will allow you to date the characters of Let’s Play.  We’re exploring a lot of options!  In the meanwhile, Let’s Play will continue to be updated weekly on Webtoon!

While the Let’s Play Kickstarter has met its goal an amazing 16 times over, there’s still time to contribute to this phenomenal and worthy campaign!