I would knock Professor Xavier out of his wheelchair for this LEGO set– if he didn’t make me poop myself with his mind powers first. That’s right: Purchasing your very own X-Men X-Mansion has come one step closer to being a reality! 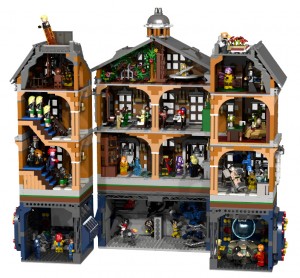 Fans DarthKy and GlenBricker have created a LEGO replica of the Xavier School for Higher Learning for LEGO Ideas. Now that their brainchild has reached 10,000 supporters, the folks at LEGO will review the project for possible production. If LEGO gives it a green light, then fans will be that much closer to possessing the home of Marvel ‘s band of merry mutants.

While it’s not known at this time how many of the featured X-Men mini-figures will make the cut in a possible final set, the creators are shooting for some key X-folk, such as Beast, Shadowcat, Professor Xavier, and Cyclops. More may be included based on fan input and other considerations down the road.

The LEGO X-Mansion includes many nifty elements that would make any X-fan squeal like a Beatles fan in the front row of the Ed Sullivan show during the band’s performance. (That analogy is still topical, right?) However, the following aspects are enough to make me throw my metaphorical underwear at the stage: 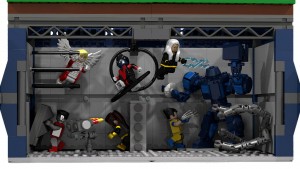 The set features a Danger Room! A miniature Danger Room! For the uninitiated, the Danger Room is the X-Men’s version of the holodeck from Star Trek: The Next Generation, but with more battle training and less Commander Ryker letting his sexual id run free. The Danger Room, which the designers note is one of the elements that is most closely tied to the X-Mansion, is the largest component of the set, with environments that are capable of LEGO manipulation and reconstruction, just like the room itself in the comics. Also included would be “holographic villains”—clear Lego pieces with depictions of X-foes such as Magneto and the Juggernaut.

Other rooms include an area for Cerebro, Professor Xavier’s mutant-tracking system, and Beast’s lab. Looking at the lab, I appreciate the care taken in the little details, from the Erlenmeyer flasks in Dr. McCoy’s lab to the rotating medical bed to the bars from which that blue-furred bastard can swing while sciencing up the joint with his sciency science! In all sincerity, well done. 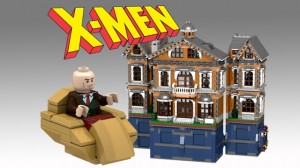 Also important! While it depicts Cyclops in his 1990s-buckled glory, it’s okay because the designers made Cyclops! Cyclops may or may not make it into the set’s final cut, but I’m still stoked that it’s a possibility. (Can I say stoked? I’m going with it.) I’m an unabashed fan of Scott Summers. If someone gave me a “Cyclops Was Right” T-shirt, I’d wear that mother all the time!

For more information and a closer look at the LEGO X-Mansion, check out their campaign page and the LEGO Ideas page for the project.