I think it’s fair to say that one of the reasons for the staying power and enduring appeal of the Batman after over 75 years in various forms of media is the character’s grit and determination. Much has been made of the Dark Knight’s ability to plan for any contingency that could possibly get in the way of his goals. Despite being a mortal walking among god-like superheroes such as Superman and Wonder Woman, the Batman relies on a willpower that verges on the border of the supernatural to press on achieve his fullest potential. The Caped Crusader’s overflowing coffers aside, both diehard and casual fans of the Detective seem to admire the vigilante for being, as the Spectre put it in Kingdom Come, “the zenith of human fortitude and ambition.”

Even when they disagree with the Batman’s methods, his peers in the do-gooder community can’t help but agree that the Masked Manhunter is a tenacious bastard. In writer Mark Waid’s Justice League: Tower of Babel, it’s revealed that Batman had concocted contingency tailored plans to use against members of the Justice League should they ever go rogue. While many of his teammates bristled at what they considered Bruce’s betrayal, some of the League’s members admitted that he might have had a point. As Blue Beetle reminds Black Canary in the aforementioned Kingdom Come, “Does Batman ever not have a plan?”

How far does that laser focus extend, however? According to writer Grant Morrison, it turns out that Batman. Thinks. Of. Everything.

During Morrison’s six-year run on writing the Batman, the writer explored what exactly it means to be the Dark Knight and how all aspects that make up the hero—both the Caped Crusader persona and Bruce Wayne—are necessary for a fully-realized Batman to function. To that end, he incorporated into his stories nods to older Batman tales written out of continuity, repurposing them to use as touchstones and commentary on who the Dark Knight Detective is at his core. One such element of past yarns that Morrison folded into his stories, specifically the “Batman: R.I.P.” storyline, was the Batman of Zur-En-Arrh.

In the late 1950s, a story entitled “Batman: The Superman of Planet X” introduced the idea of a Batman from another planet called Zur-En-Arrh. A scientist from that planet known as Tlano brought Bruce Wayne to Zur-En-Arrh to help him fight off giant robots. Inspired by the Batman, Tlano fashioned his own version of the Bat-suit, its notable defining characteristics being that the costume was colored purple, yellow, and red. (Comics, everybody!) 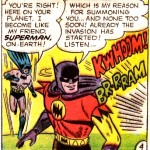 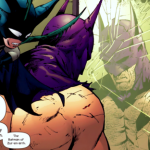 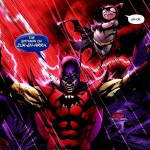 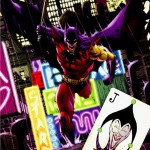 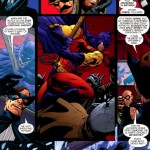 Fast-forward to the 2000s. Morrison, known for taking older concepts and dusting them off to make them relevant to today’s comic book tales, put his own spin on the Zur-En-Arrh story. Dispensing with the alien backstory, the Batman of Zur-En-Arrh featured in “Batman: R.I.P.” is described as a back-up personality should the Dark Knight become psychologically compromised. That’s right: Bruce Wayne is that paranoid and that damn good. When I said that Batman thinks of everything, I meant just that: EVERYTHING. He foresaw a situation in which his very mind might be attacked and set up preventative measures so that, even if Bruce’s mind was assaulted, the Batman would go on. During the “R.I.P.” tale, Bruce is psychologically tortured, triggering the Zur-En-Arrh persona to take over a compromised Bruce.

The Batman of Zur-En-Arrh shared many of the hallmarks of the Dark Knight we know, with some key, notable exceptions. This aspect of the Batman is more willing to use brutal force to subdue enemies and donned a similar, though tattered, version of the “Planet X” story. A “voice of reason” this Batman sees in the form of an imaginary imp known as Bat-Mite (another Morrison appropriation from a past tale) tries to ground this Batman from teetering too far on the edge of insanity. As this Batman points out, the Batman of Zur-En-Arrh is what happens when “you take Bruce Wayne out of the equation.”

As the kids say, can you see how baller that is? Batman put contingencies in place should someone attack his very mind. He refuses to go down. He looks at those who would assault his very identity and, unwaveringly, says, “Fuck you, I refuse to go down.” The man truly never not has a plan. And while he the personality that acts a back-up persona is a bit unhinged—at one point, he refers to the streets where his parents died as a grid, “a machine designed to make Batman”—Bruce Wayne shows that he is the greatest tactician alive, truly “the zenith of human fortitude and ambition.” Even when the core of who he is is at risk, he is selfless enough to make certain Gotham City is still under his protective gaze.

Another, subtle theme of the story centers on how essential Bruce Wayne truly is. For years, many writers contended in their tales that Batman is the real person and Bruce Wayne is the mask and, to an extent, that might be true. However, Morrison seems to want to say that both the Dark Knight and Bruce are necessary for one complete Batman. Bruce keeps Batman sane, whole, and benevolent. Without Bruce’s guiding hand, the Batman is merely a force of nature with no leash or direction. Bruce is the Batman’s humanity and moral guidance and, Morrison alludes, Batman isn’t Batman without him.

Have a great Monday, folks! I think I might wander down to the nearby university to see if I can get a psych major to help build a backup Jed personality. Seems like nothing awful could happen from that, right?