Greetings again, plastic lovers. As part of our initiative to catch up on the Marvel Legends that are out there in the wild, we need to talk about those things that are both bane and bounty to collectors everywhere: exclusives. They’re a bane, of course, because when they’re not easily available online, they require multiple stops at places that you might not frequent. And if you miss your window, you might find yourself haunting eBay or hoping for a convention grab that isn’t priced past your rent. On the other hand, they’re often the home for unique interpretations of characters or make for a special piece that not that many others have.

Today, we’re going to talk about two exclusives that have been out for a bit: the Walgreens Exclusive Agent Venom, and the Toys R Us Exclusive Avengers/Avengers Initiative/Agents of S.H.I.E.L.D. boxed set.

Close up of Sam Jackson

Just look at those tentacles!

Coulson and his body-less twin

He doesn’t even know what that gun does!

How I Met Maria Hill

The 2015 Exclusive Forecast: In case you were unaware, here are the remainder of the Marvel Legends Exclusives that will be appearing over the next few months.

Entertainment Earth Guardians 5-Pack: Currently available for pre-order (for August shipping) from Entertainment Earth, the long-promised Guardians of the Galaxy 5-Pack brings you the comic versions of your favorite ragtag band of Marvel Cosmic troublemakers. Based on their appearances from the Abnett-and-Lanning-written run are Star-Lord (with blasters), Rocket Raccoon (with huge blasters), Drax (updated from his individual release of a few years ago), Gamora (with sword and cloak), and Groot (based on the BAF from the movie Guardians line, but with a comic-centric head). The set also includes the obligatory baby Groot in a pot.

Target 3-Pack: This Age of Ultron related pack includes an all-white Vision (West Coast represent!), a pretty nice Ultron that’s made in part from the recent Beetle body, and a “Doc Green” Hulk based on one of his recent comic looks.

Amazon 4-Pack: Amazon gets a Marvel Legends 4-pack that ties in with the currently-in-release Thanos assortment. Whereas that wide release includes “Age of Ultron” based versions of Cap, Iron Man, and Hulk, this box rounds out the rest of the core team with AoU takes on Thor, Black Widow, Hawkeye and Doctor Banner. From the images, Black Widow is very nice, sporting as she does the new movie outfit and escrima sticks. Hawkeye looks very similar to the 2012 Wal-Mart exclusive, but Thor is largely updated. And of course, the Ruffalo-like Banner marks the first time that the green goliath’s human alter ego has been seen around the various lines in a while.
All right then . . . over to . . . 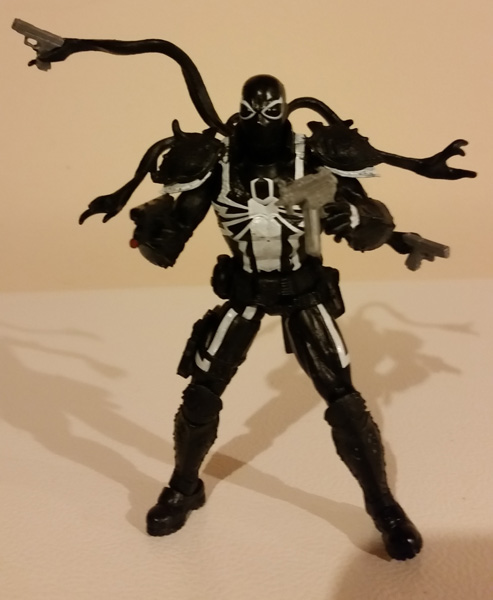 Walgreens Exclusive Agent Venom: When the announcement was made that Walgreens would be carrying a number of exclusive figures starting in 2014 (including items from Funko and the Star Wars “Black” line), some fans were skeptical. From the retailer perspective, though, you could understand why the store would want in on that action. Exclusives increase foot traffic, and it’s definitely a bid for a different audience. Agent Venom made sense as a character, too, given that he would appeal toward a few fanbases (Spider-Man devotees, readers of the Secret Avengers or Guardians of the Galaxy comics, completists, etc.).

As a figure, Agent Venom is pretty solid. There are a number extra pieces attached to the sculpt to pull off the costume design, including the shoulder pads, belt, boot extensions, and thigh holster. On top of that, there’s the four tentacle/pseudopod attachment to fits into a hole on the figure’s back. The ends of each “tentacle” are sculpted to hold one of the character’s weapons, just like in the comics. Speaking of the weapons, there are four: what appear to be two 9mm, a pistol with an under-the-barrel laser sight, and what might be an H&K semi-automatic pistol. In terms of the paint op, the white really pops off of the shiny black finish. The two-tone look really separates it from other versions of Venom, particularly since those frequently have the splash of red at the tongue.

Overall, this is well-done. It’s not a figure that I expected, quite frankly, and I wasn’t sure what I thought until I saw it in person. At that point, I was sold. It’s a different look, and you can display it in a number of ways (Spider-Man cast, with the aforementioned teams, etc.). I have it on good authority that these are still circulating at some stores. If you don’t have a Walgreens nearby, then you might check in with friends or take a look at Amazon or eBay. Prices vary radically online, but they’re still $19.99 if you find one in the store itself. 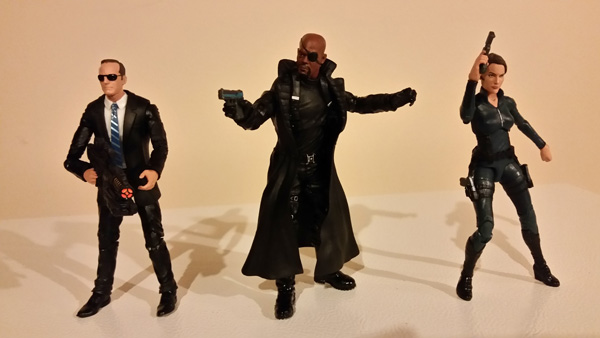 Toys R Us Exclusive – Marvel Avengers Legends Agents of S.H.I.E.L.D. 3-Pack: Yes, that lengthy title is how this particular set is listed on ToysRUs.com. The biggest selling point is definitely the heretofore unmade Agent Coulson. Phil is accompanied by Nick Fury (an updated version from an earlier Captain America set) and Maria Hill (updated from the earlier comic pack, including a new head sculpt to resemble actress Cobie Smulders). Since he’s the big fish, let’s talk the Son of Coul. 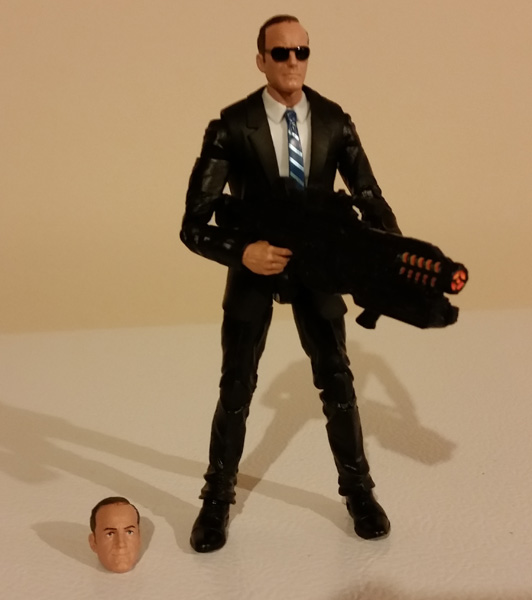 Coulson and his body-less twin

Simply put, Agent Coulson is one of my favorite figures in a while. The character’s improbable ascent, from background player to shocking death to television series lead, might be one of the strangest journeys to prominence in recent media (no stranger than, in a way, the journey of Coulson’s portrayer, Clark Gregg, who nabbed the role in part because Iron Man director Jon Favreau was his neighbor and knew he was a Marvel fan). With the character becoming popular enough to merit a show, then a spin-off comic, it was really only a matter of time until he hit Legends status. While the suit buck is similar to takes we’ve seen in the past, the two head sculpts are excellent original likenesses. I prefer the sunglasses look of the two. Agent Phil is packed, understandably, with his Revenge/Destroyer blaster from Avengers. The right hand sculpt fits neatly on the grip and trigger; I was curious what the balance would be like, but the figure stands easily even with the blaster. 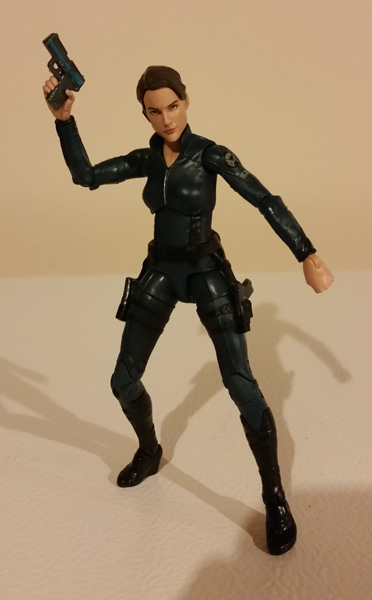 As for Maria Hill, I’d have to say that it’s rather refreshing that we’ve already had two appearances by her in the Legends line. This movie-centric take with the Smulders look is completely sensible. The likeness is not quite as spot-on as Coulson; you have to turn it a bit to catch the right angle where you’ll see the actress (or where crazy customers will see Robin Sparkles). The ops are decent, notably the S.H.I.E.L.D. insignia on the upper left arm, and the collar is a good touch. One downside is that Hill comes with no accessories. Two pistols were packed for Fury, so I appropriated one for Hill, given that she spends more time between her three films (both Avengers and Winter Soldier) with a weapon in her hand than Fury does. 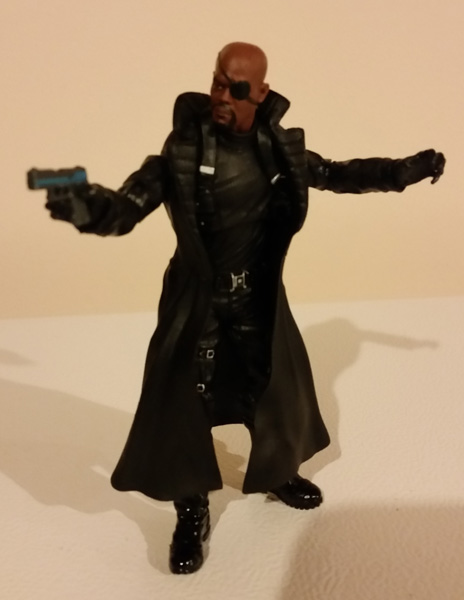 Apart from figure Fury attempting to be a pistol-hog, this is a good straight-up take on, as Tony Stark calls him, THE Spy. The costume adjustments fit the films, falling somewhere between Avengers and Winter Soldier. The likeness is good, and some elements, like the boots, are surprisingly shiny. The pistol accessories are fine, but I would have liked to have seen Nick come with briefcase for Cosmic Cube storage (I mean, it IS iconic enough for the Phase One Blu-Ray set, right?). Nevertheless, if you want a modern/film version of Nick Fury, this is the set to get.

Taken together, this is a nice set. As I said, Coulson is the big draw, but have two good support figures, particularly if you don’t already have comparable versions of either. The set does however suggest the question surrounding other Agents of S.H.I.E.L.D. cast members. I could easily see Skye/Daisy Johnson/Quake making a Legends assortment, possibly even Agent May or Agent Carter. My most educated guess might be that if we see further cast members of the show, they’ll turn up in exclusive sets of their own. And the hunt continues . . .

Coming Soon: As we continue to catch up on the Marvel Legends, it’s time to take on the Thanos wave. (Yes, Hellcat!)