The nerd/jock relationship has been explored across pop culture, from examining friendships and rivalries between folks falling under both labels and stereotypes. However, what happens when jocks suddenly find themselves at the bottom of the pecking order after being alphas for so long? That’s what writer Paul Constant hopes to examine in his new AHOY! Comics series Planet of the Nerds.

In Planet of the Nerds, three high school jocks find themselves transported in time from 1988—where they’re top dogs—to the present day, where all things nerdy are cool and admired by the world at large. Mr. Constant examines that paradigm shift, what it means to be a nerd or a jock, and whether the labels are so black and white.

Mr. Constant spoke with us recently about the conceit of Planet of the Nerds, the influences behind the comic, fleshing out nerds and jocks beyond their stereotypes, and what we can expect to see in the series moving forward.

FreakSugar: For folks considering picking up the book, how would you describe the idea behind Planet of the Nerds?

Paul Constant: In movie-pitch terms, I guess it’s kind of like a cross between Back to the Future and Idiocracy. It’s an action-adventure comedy with a science fiction twist, about three popular high-school jocks from 1988 who are accidentally frozen and thawed out in 2019. When they come to, they immediately learn that the tables have turned: Nerds, their mortal enemies, now run the world. In this dystopian future, everyone loves comic book movies and aspires to be a computer programmer. It’s the jocks’ idea of hell, so they decide to restore the old social order. 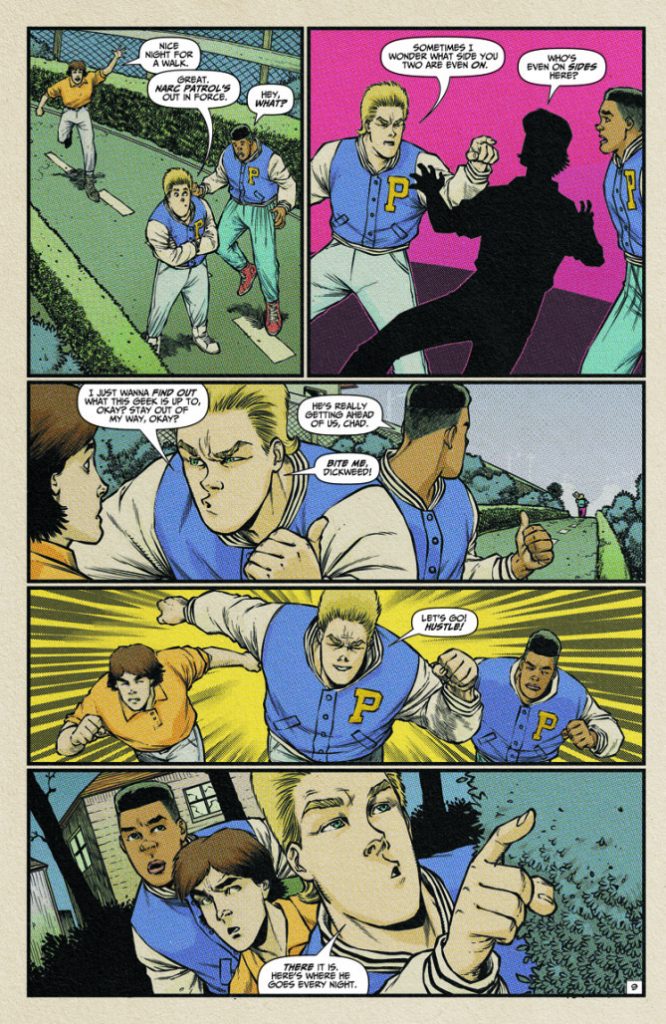 FS: Some of the main characters we meet in the first issue aren’t exactly the nicest of folk. What can you tell us about the cast of PotN? Were any of the characters, kind or cruel, based on real people you knew growing up?

PC: It’s true that the main characters are hard to love at first—on the very first page the lead jock, Chad, is clobbering a nerd named Alvin in the hallways of his school. That’s a lot to ask of a reader, I know! But I hope it’s apparent just a few pages into the first issue of PotN that we’re leaning on those stereotypical roles for a reason, and that’s to investigate the labels that we give each other, and how they shape who we are through our lives.

I wouldn’t say that any of the characters in PotN are based on my life. I was a comic book nerd, but my chemistry teacher would tell you I wasn’t a scientific genius like Alvin. And my high school didn’t even have a football team when I went there, which is a good thing for me because I almost certainly would’ve been the subject of some bullying. But as with pretty much any piece of fiction, you can definitely find some heightened and distorted echoes of my own life, and the lives of the people around me. 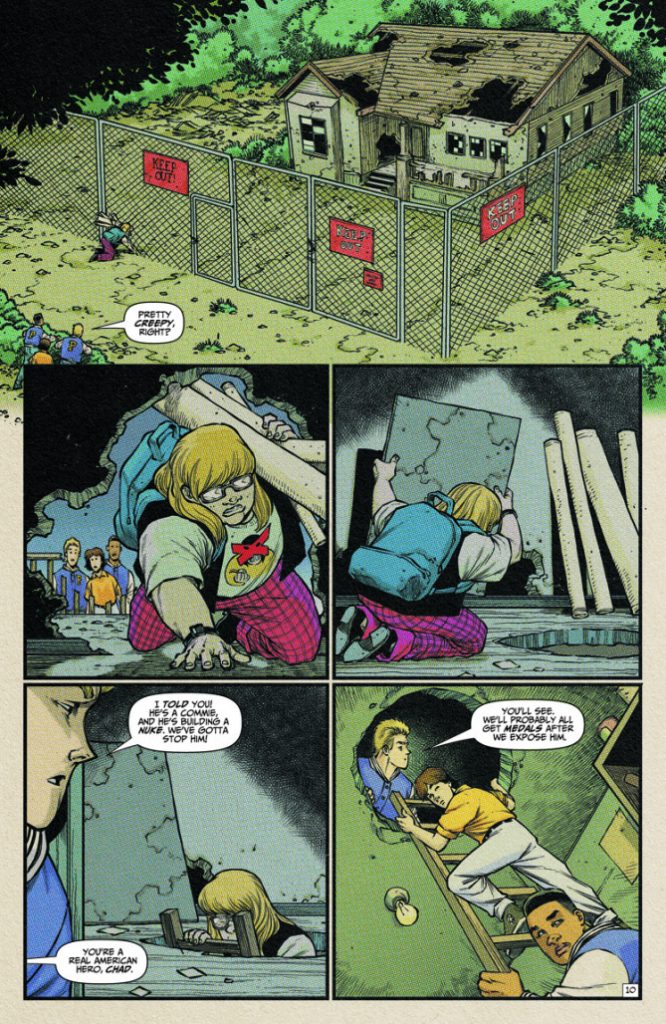 FS: This is your first comic series. How does your previous work inform how you approach PotN?

PC: The nice thing about writing is that pretty much everything you do or experience goes into the stew of potential story ideas. I’ve been a mall Easter Bunny, I’ve worked in bookstores, and I sold shoes at a K-Mart, and all those jobs put me in contact with people and situations that inform my work.

For the last fifteen years or so, I’ve been a professional writer at alternative weeklies and various newspapers and magazines, and all that writing has definitely prepared me for writing PotN.  First of all, it taught me about the importance of hitting deadlines, turning in clean copy, and receiving editorial guidance graciously. And second of all, in my work as a book critic I’ve met and/or interviewed some of the greatest comics creators of our time, including G. Willow Wilson, Neil Gaiman, Gahan Wilson, Peter Bagge, Emil Ferris, Julia Wertz, Harvey Pekar, the Hernandez Brothers, and Faith Erin Hicks. I’ve learned so much just sitting quietly across from those folks and listening to what they have to say. It may not be a formal education, but it’s the best way I know how to learn.

FS: I grew up in the 1980s, as I’m sure did a lot of your readers. What is it, beyond nostalgia, do you think that makes creators of late revisit that period?

PC: I’m an 80s child, too, though I’m a little younger than the jocks and nerds we meet in Nerds. I think that people just naturally like to compare the current time to the not-so-recent past. Think, for instance, of Back to the Future—the movie is set in the year 1985, and Marty McFly goes back to the year 1955, which is basically the same time difference our jocks travel forward in PotN.

And it’s not just nostalgia for the past that drives this desire to compare times—I was only 9 when BttF came out, but I was fascinated by the juxtaposition of 1985 with the distant past of 1955, when my parents were young. Thirty years is a hefty amount of time, and you can really see how far we’ve come—and how far we haven’t come—by comparing the present to the past. 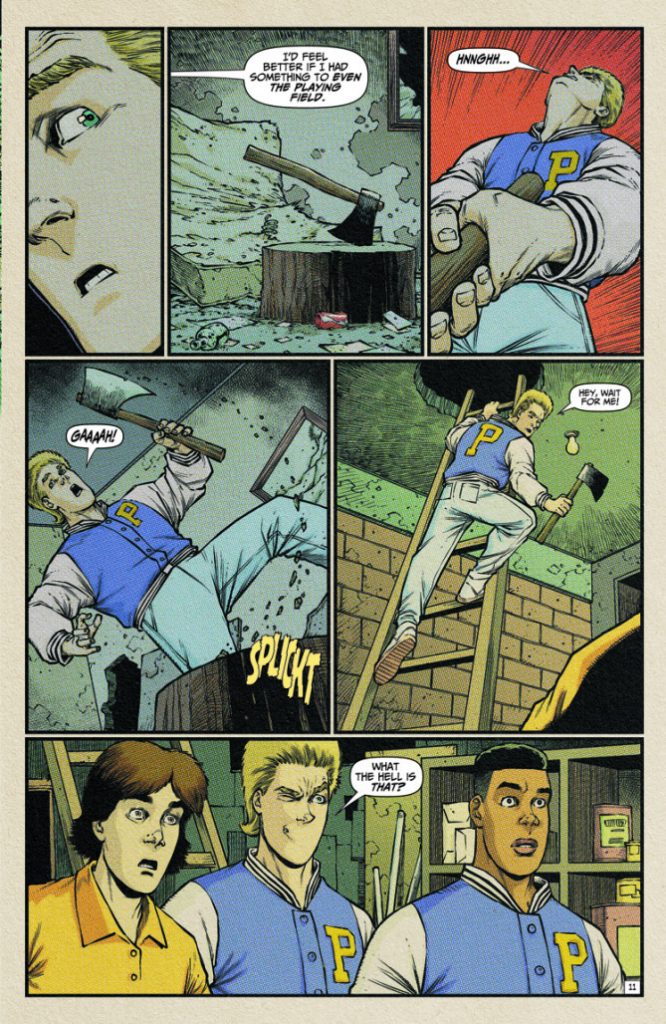 FS: Judging from the first issue, it seems you’ll be examining the idea of what a nerd is, both in the 1980s and now, and how that perception changes people. Will we see the jocks change in their points of view as the series progresses, regardless of it’s for the worse or the better?

PC: If I’ve done my job correctly, every character will seem completely different to you by the end of the series. They’ve all got their secrets and their fears and their inner demons, and we’ll learn about those as the story goes on. I’m not saying that everyone will become more likable, but I hope they’ll at least be more understandable—and maybe that you’ll see a little of yourself in all of them.

I’ve never written a story this long before, and I was surprised while I was writing how real these characters felt to me. It was like they were eager for me to push past the simple jock/nerd cliché. 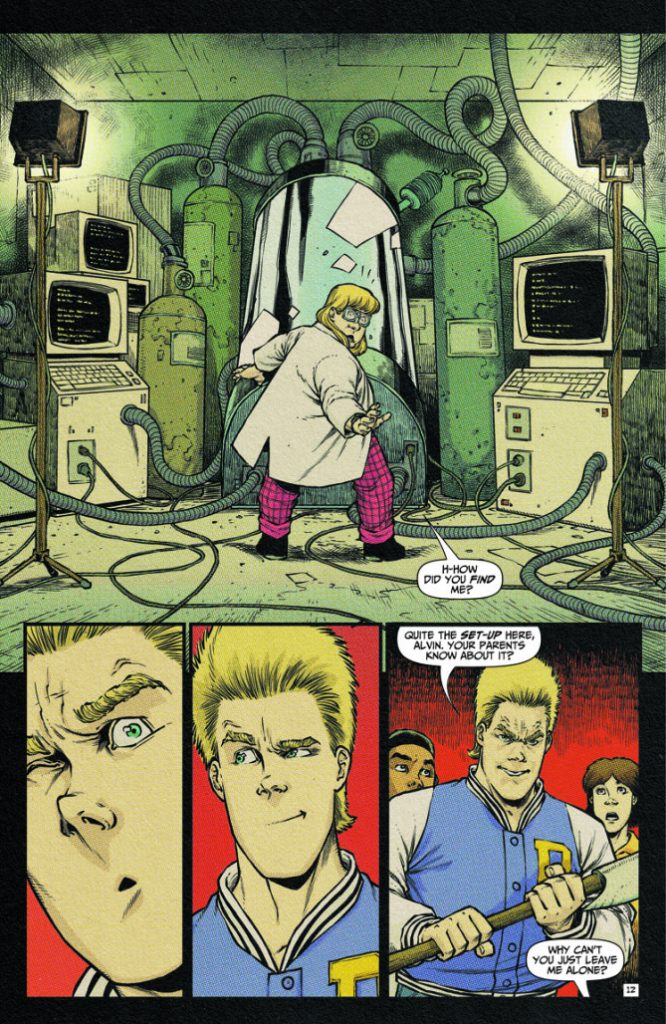 FS: Alan Robinson’s linework in the first issue meshes wonderfully with your story. What is the collaboration with you two like as you alternate between the 1980s and the 2010s?

PC: Isn’t Alan wonderful? I’m in awe of the way he can convey such raw emotion in a handful of lines, and he can also draw a pratfall better than just about anyone. I wrote the first issue script without an artist in mind, and then AHOY Comics Editor-in-Chief Tom Peyer suggested Alan for the art. We immediately clicked—in just a few character sketches, Alan went from a potential collaborator to a full-on co-creator. Before he even drew one panel, I knew that I couldn’t do this comic with anyone else. I think the only suggestion I ever made to Alan was right at the beginning, when I said that I thought he should make everyone’s hair bigger to more appropriately reflect the 1980s styles. Since then, it’s been an eerie mind-meld.

After Alan came on board, Randy Elliott joined us as the backup artist. He’s drawing backup stories in every issue that focus on individual characters, and he added a little bit more of an alternative comics vibe to the whole thing, which helped to give the characters an interior life. And then when Felipe Sobreiro came onboard to do the colors, the story deepened into what you see today. What Felipe’s doing with the colors as a storytelling device—the way he’s drawing distinctions between the 1980s and the present day, using period-specific coloring techniques as a shorthand, is nothing short of brilliant.

FS: Is there anything you can tease about the book going forward?

PC: We’re in for a wild ride. Each of the issues in this book reflect a different genre of popular 1980s movie. So we’ve got a raunchy Porky’s-style sex comedy and a madcap Ferris Bueller’s Day Off-style adventure and even a Bright Lights Big City dark night of the soul. Chad’s need for revenge is going to lead to some weird, dark places—and there’s a riot at a comic book convention that I think is a hell of a lot of fun, too. So in short: you can expect tear gas, sex toys, and shoplifting. What’s not to love?