Revenge is a fire that burns both the accuser and the accused, leaving neither unscathed. That’s the danger that the protagonist of Scout Comics‘ upcoming miniseries Zinnober will contend with this June when issue #1 hits newsstands. Co-written by Ralf Singh (Narcopolis: Continuum) and Thorsten Brochhaus with Singh on pencils, inked by Cristian Creda, colors by Ilaria Fella, and lettered by Taylor Esposito, Zinnober follows a world similar to ours following a dragon apocalypse. As the remaining humans rebuild as best they can, Claire is shaken from her reverie and despondency when she discovers that there’s a chance that the dragon overlords who killed her family can be defeated. However, as much as the book is about casting off the shackles of physical enslavement, it’s also concerned with how feelings of revenge can be just as weighty.

Ahead of Zinnober’s preview in this Saturday’s Free Comic Book Day offering from Scout Comics, Mr. Singh spoke me with about the idea behind Zinnober, how ideas about how humans act toward human and animal life are reflected in his tale, and what we can expect from the book moving forward. (Also be sure to check out our exclusive preview of a page of the miniseries‘ third issue!) 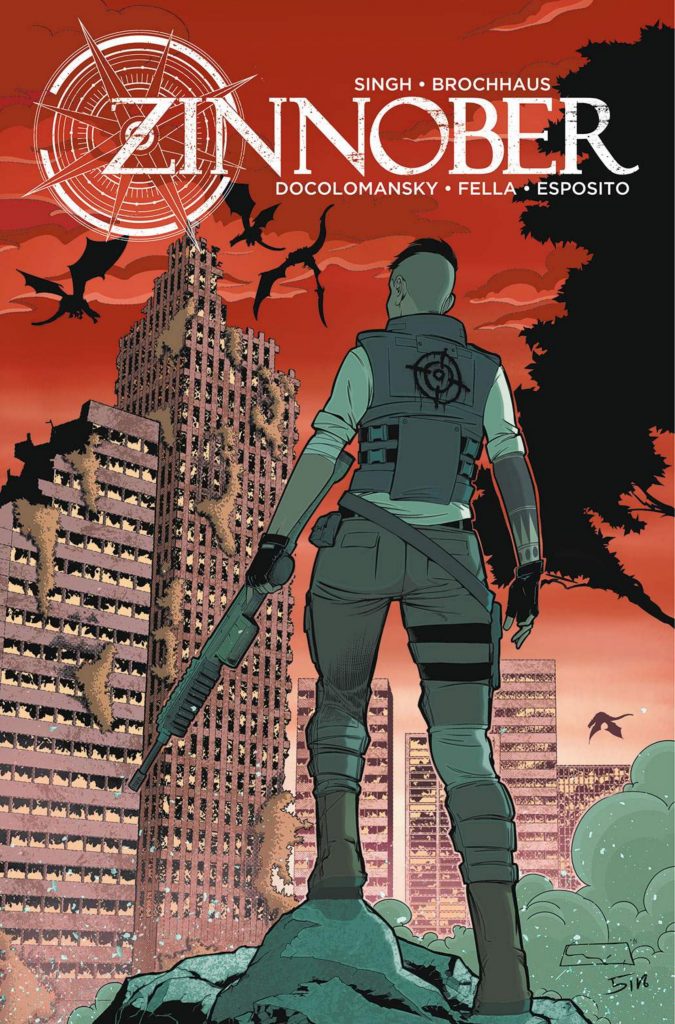 FreakSugar: For folks who might be considering picking up the book, what can you tell us about the conceit of Zinnober?

Ralf Singh: Zinnober is set after a dragon apocalypse in a world parallel to ours. The survivors have accepted the dragons’ dominion over the planet. However, they do so in very different ways. While most people try to stay in the few safe zones to rebuild civilisation, there are those who try to stay as close to the dragons as possible to worship them as their gods.

The story of Zinnober follows Claire, whose entire family was killed by the dragons. This is the reason for the deep-seated hatred for them that drives her. Still, she as well as the whole of humanity has accepted that the dragons cannot be defeated –until one day she meets Andrew.

Andrew has some wild theories about how the dragons can be defeated so Claire follows him on a path that sounds quite dangerous to her and those close to her. Zinnober explores the question: how far is Claire willing to go to avenge the death of her family? 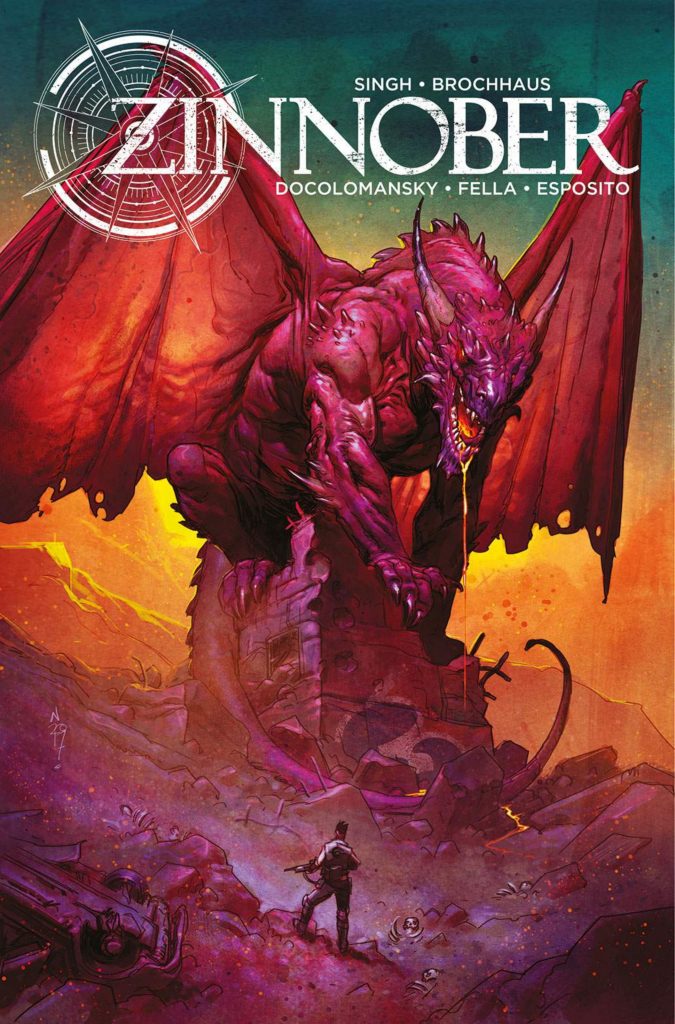 FS: Blending our world with dragons in a post-apocalyptic landscape seems as though it will open up many storytelling opportunities. How long have you had the idea for Zinnober?

RS: The people in Zinnober could be people from our own world. Starting probably five years ago my first draft of Zinnober was more of a mix of Orwell’s 1984 and Blade Runner. It was more like a dystopian science fiction comic. But then I realised that the questions and themes I wanted to explore would be even more fitting for a world similar to our own. So, I totally dropped that dystopian sci-fi idea and started from scratch. 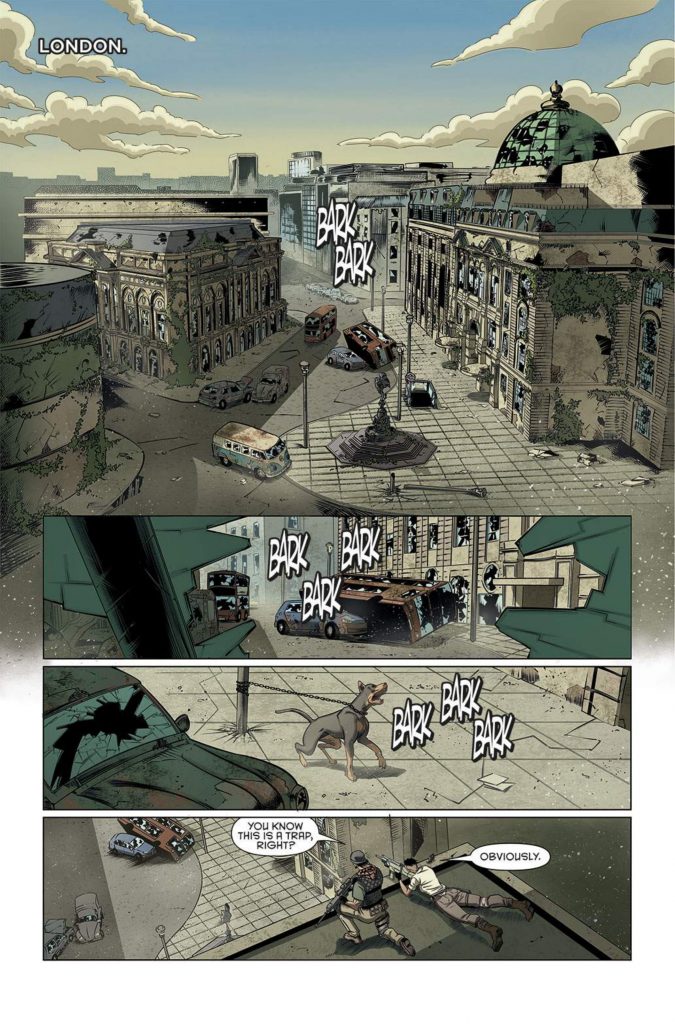 FS: Following up on that, why did you choose to include dragons in your tale of a post-apocalyptic world? What was it about incorporating those creatures that clicked with you?

RS: First of all, it was an artist’s decision. I wanted to draw something that I’d never done before. And while dragons grew to be an increasingly integral part of the story it could also work with zombies or giants.

The reason why I chose to use dragons instead is because of their destructive and majestic nature. Dragons surely are among the most impressive creatures in fiction.

And then, one day I saw a picture of a tiger underwater. I was instantly fascinated by how beautiful tigers are when they seem to be flying. Also, the mix of the beauty and savage power of dragons is what totally fits with my concept of nature taking back the earth from us humans. This is something I try to drop on the pages of Zinnober once in a while. 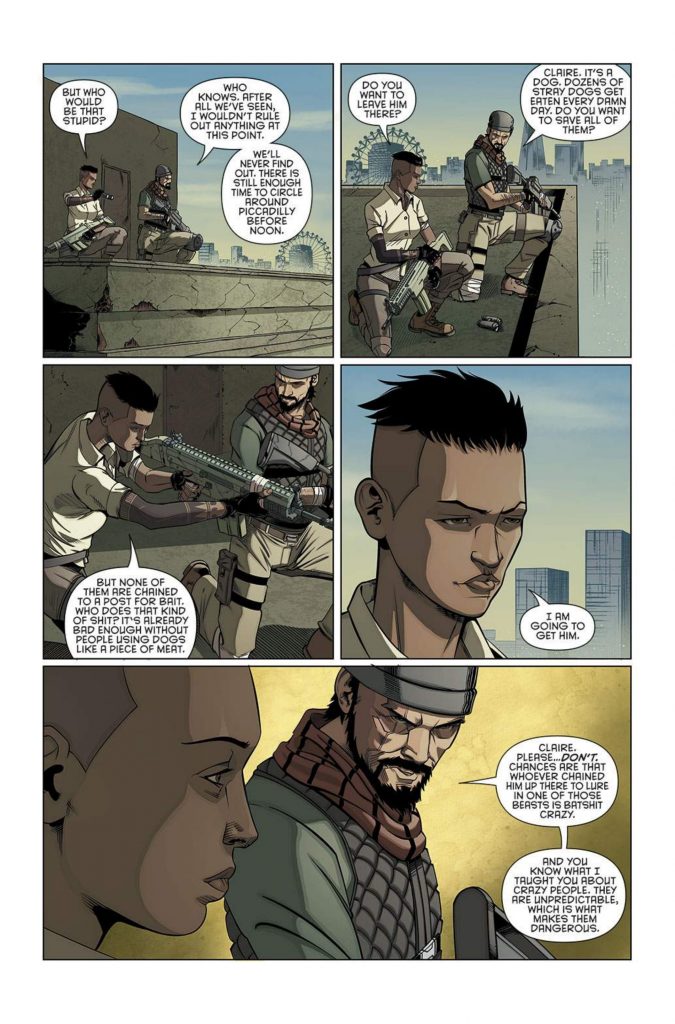 FS: The title Zinnober refers to color of blood and something that is worthless. Thematically, how do those ideas fit into war and the post-apocalyptic world of the series?

RS: It kind of goes back to the idea how our modern world treats human life. I mean, we always say human life is a top priority, but that often changes very quickly when it comes to personal, political, or financial conflicts. Claire kind of reflects that. While she is a good person, her desire to fight the dragons puts many people in great danger. I want to show how far that can go and in the end I want the reader to decide if this was the right thing to do or not. 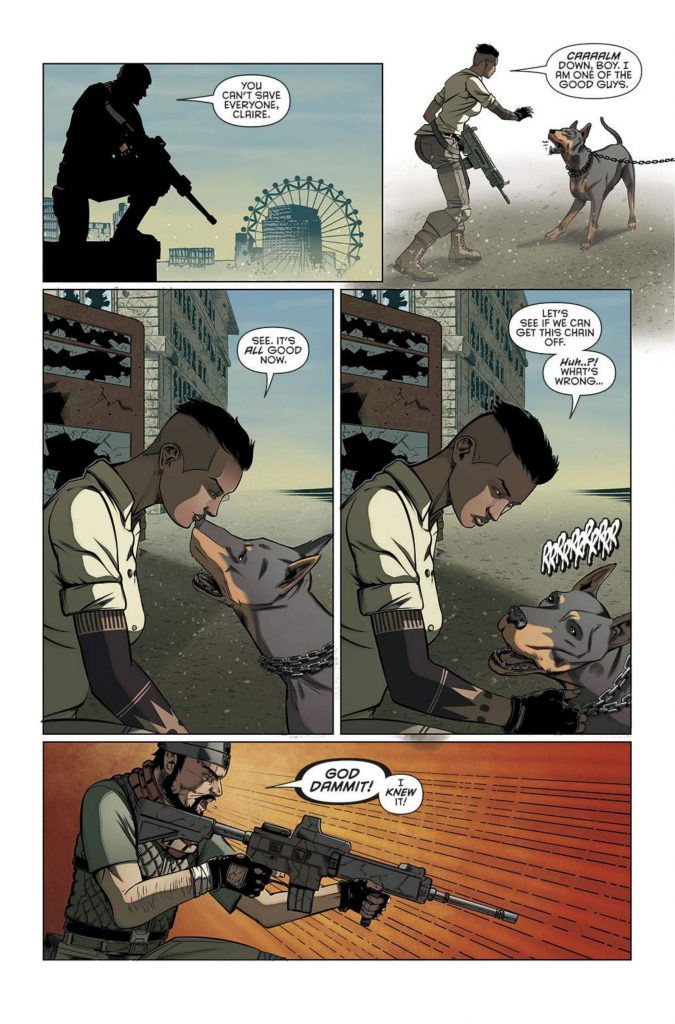 FS: What can you tell us about the main character of Zinnober and her motivations in moving through the world of the story?

Claire is driven by revenge. She has this tattoo that reminds her of her mother, who died in the first dragon attacks. And there is also her foster father, James, who found her as a child and raised her as one of his own.

On the one hand, James gave her the skills to survive in this new world, in addition to love and support. They have a very strong bond and in many ways, James is the only person Claire really cares for in the whole world.

On the other hand, he is a broken veteran of the war against dragons. He has done terrible things. And not just against the dragons. Finding and raising Claire did not just save her, it also saved him. 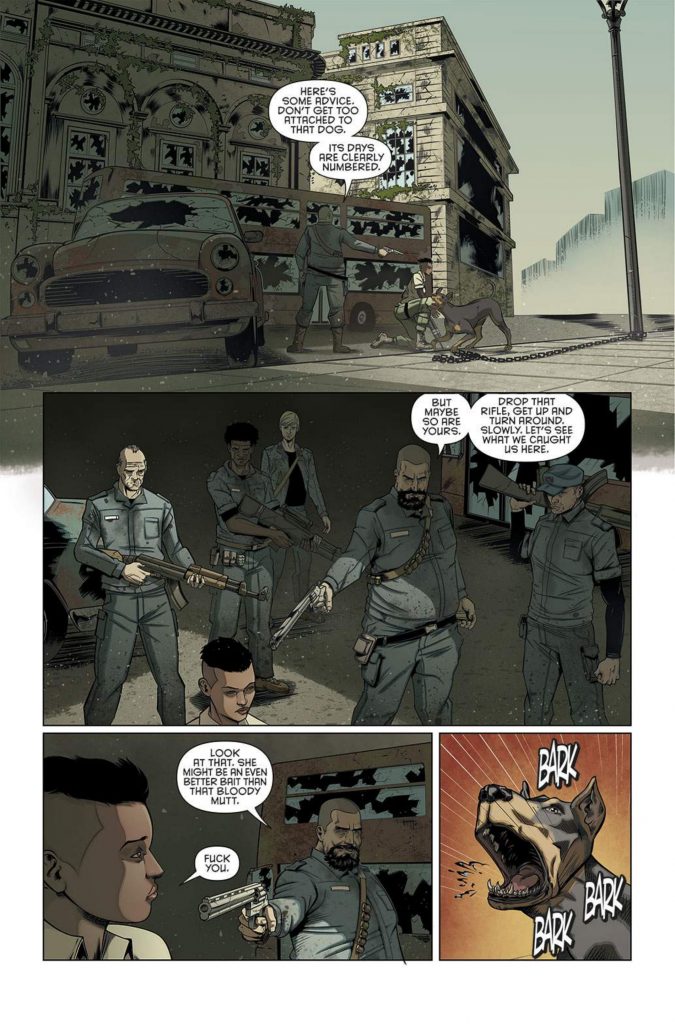 FS: The conceit of Zinnober centers on a post-apocalyptic world filled with dragons. What are some fantasy or apocalyptic tales that have influenced you as you approach Zinnober?

RS: So, one thing that influenced Zinnober is the TV show The Last Ship. It’s not that obvious in the first issues, but in the second arc (beginning with issue #4) you’ll start to see a lot of battleships. Another TV show that inspired Zinnober is Falling Skies. It’s about human survivors fighting against the undefeatable new alien rulers of the world. 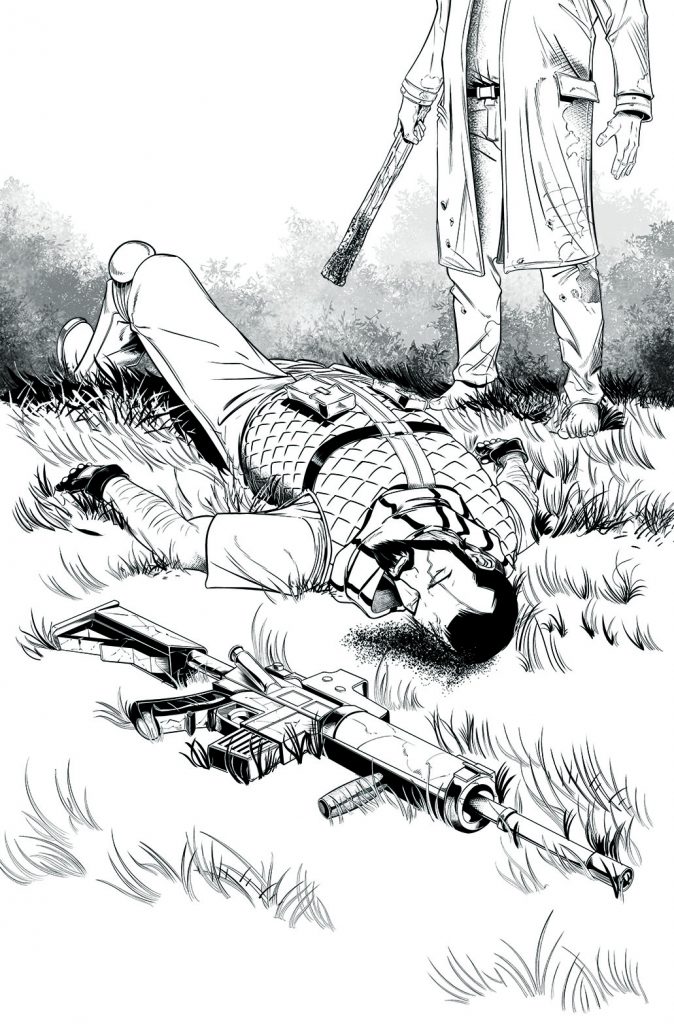 Exclusive preview of page 4 of issue #3

FS: Is there else anything you’d like to tease about what we can expect from the title?

RS: Well, I can promise a lot of action with even more action in the last two issues. And of course there’ll be even more and even bigger dragons, obviously.

Twenty years ago dragons returned to Earth and laid waste to human civilization. In the event the surviving humans named “Zinnober,” Claire, then a young girl, lost her parents to the devastating force of these primeval creatures. Today, she’s hell-bent on avenging the death of her family. But will the skills she was taught by her foster-father, the troubled ex-Marine James, be enough to fight an unstoppable enemy older than the Earth itself? Will the knowledge of her newest ally, the young scientist Andrew, bring her even closer to her goal? And what role will the mysterious Followers, a cult of mad dragon worshipers, play in all of this?