“Batman #40 is a master class in how the right creative team can make readers believe in the high stakes in a conflict between two characters like the Batman and the Joker, who share so many years of history. At both the micro and macro levels, this issue shows what happens when two icons are truly at the end of their ropes.”

Batman writer Scott Snyder has hinted several times, both in interviews and in the pages of the Dark Knight Detective’s comic book, that Bruce Wayne’s life as a champion for justice will not have a happy ending. While the Caped Crusader has thrown his all into creating a mono-myth in the character and idea of the Batman, the irrefutable fact is that Bruce Wayne is, ultimately, just a man, flesh and blood that will eventually become broken and undone. However, Batman has alluded time and again that he considers it an honor and reason for living to do right by his home of Gotham City, no matter the costs. Still, the question remains how far will Bruce go to protect the city he loves.

In Batman #40, the final chapter of the “Endgame” storyline, we find out the extent to which Bruce is at the end of his rope and running out of options to stop the Joker from murdering every single citizen of Gotham. As we see a bit more of in this issue, Batman has already made the pragmatic yet desperate decision to enlist his rogues’ gallery of villains in an attempt to stave off the Clown Prince’s threat to the city, a move that shows how many pacts with the devil he’s willing to make to meet his goals. Eventually, though, the scene shifts to Batman’s search for the mythical pool of Dionesium which might hold the key to stopping the Joker from transforming the people of Gotham into cackling zombies. And it’s in the caves beneath the city at that pool where the Joker and Batman clash not just as forces of nature, but as desperate men who are fighting for their own ends and their very lives.

The Joker, who is celebrating his 75th anniversary this year, and the Batman have fought one another on scores of occasions throughout the decades, so it’s often difficult to buy into the idea that the stakes are as high as we’re led to believe. The Batman will live to fight another day and the Joker will slither away to plot and plan against his caped foe. It’s a testament to writer Scott Snyder and artist Greg Capullo’s storytelling prowess, then, that Batman #40 is filled with the since of dread and urgency that permeates every pore of the tale. While it’s true that their fight is about saving the lives of Gotham’s citizens, on a deeper, baser level, it’s a clash of diametrically opposed ideologies, a belief in meaning versus a rejection of the idea of meaning. Throughout the course of Snyder and Capullo’s run, the Joker has attempted to show Batman how inconsequential life truly is and, in the process, has psychologically and physically maimed members of Batman’s family. It’s fitting, then, that in the caves in which Batman was born that Bruce would face off against the one man who represents the antithesis of everything Batman represents. 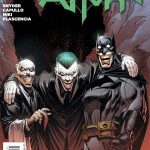 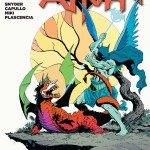 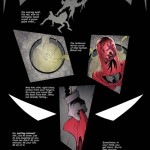 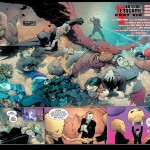 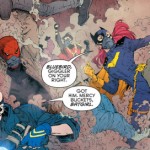 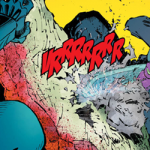 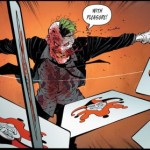 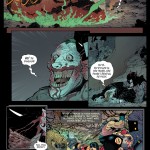 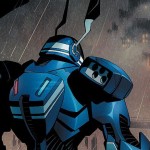 And when the two do finally clash, Snyder and Capullo manage to sell the battle in such a way that, in the pit of your stomach, the stakes feel real and heavy and have real weight. Gone is any elegance and bravado in their actions; rather, Batman and the Joker fight with a grit and flailing that makes the reader question if anyone is walking away from the battle. Again, with a quarter of a century of stories between the two characters, that’s an impressive feat to pull off. Capullo draws the fight in such a way that make both the Batman and the Joker feel intimidating in such a manner that’s rarely been depicted in their stories. Every kick, punch, and broken bone are rendered so that you know that neither character is holding anything back. The emotions that Capullo etches into their faces belies the heft and weight of the conflict and how it’s clear that the characters realize they might not be walking away from this confrontation.

Throughout the blood and brutality, Snyder manages to address the central conceit of the story, the Joker’s claim to immortality. During the course of “Endgame,” the Joker has made assertions that he’s always been and always will be, a dark spectre to torment the people of Gotham. This, along with the Joker’s ability to stay many steps ahead of everyone during his campaign to ruin the city, has left Batman disturbed, worried, uncertain, and on uneven footing. Regardless of whether the Joker is immortal, the Dark Knight manages to flip the switch on the foe who he hates more than anyone in the world, instilling a fear in the Clown Prince like he’s never managed before. Regardless of who walks away from the battle, Batman cracks the Joker in a way he’s never been able to in the past. He shows the Joker the nature of fear and, in doing so, makes him question his whole paradigm for viewing life.

Batman #40 is a master class in how the right creative team can make readers believe in the high stakes in a conflict between two characters like the Batman and the Joker, who share so many years of history. At both the micro and macro levels, this issue shows what happens when two icons are truly at the end of their ropes.

Be sure to check out our exclusive interview with Greg Capullo and Scott Snyder about this issue!

Review: BATMAN #40
Without any trace of hyperbole, there has not been such a no holds barred, gritty, bloody clash between Batman and the Joker in all the publication history of the two characters. And that's saying something.
10Overall Score
Reader Rating: (0 Votes)
0.0