Conspiracy theories and paranoia about what the government may or may not be telling us about their activities beyond the peering eyes of the populace weren’t new concepts prior to the debut of Fox’s The X-Files back in 1993. However, the series, following Fox Mulder, FBI special agent and believer in aliens and government cover-ups, and Dana Scully, his partner and ardent skeptic, tapped into the public’s distrust of the Powers That Be and its love of the paranormal.

However, since the series finale back in 2002 (the second movie notwithstanding and, really, acknowledged), the world has changed dramatically—in the proliferation of information to the public, the ease at which that information can be disseminated, and revelation that the mistrust of the government by the populace isn’t always misplaced. For better or for worse, the data hacking and release of information on government activities by WikiLeaks founder Julian Assange and former NSA programmer Edward Snowden have, if anything, only stoked the flames of skepticism that we truly know anything about what the goings-on of those who would lead us. 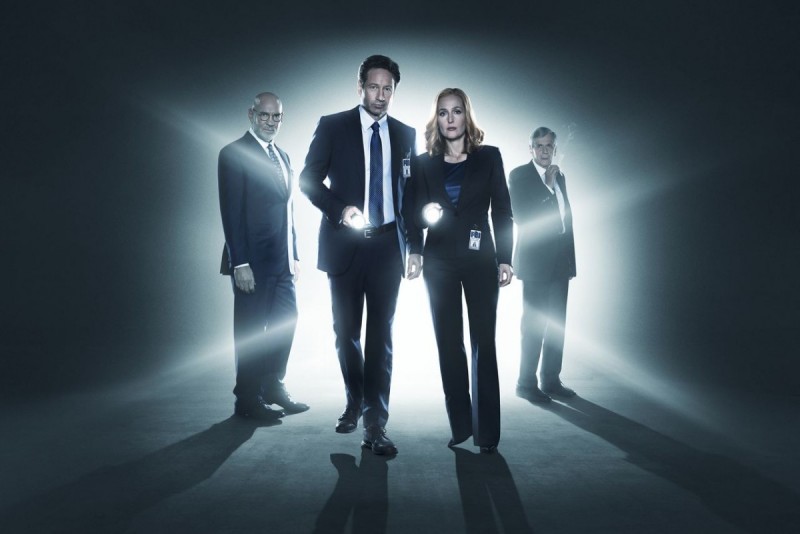 For his part, The X-Files creator Chris Carter recognizes the informational axial shift that the world has experienced in the decade since the FBI’s X-Files division was shut down and has crafted a new tale in this new miniseries (essentially season ten) that forces Mulder and Scully to scuttle to catch up with the changing paradigm. The former agents have taken their place in the world as best they know how, with Scully returning as a physician and operating on children in need and Mulder… doing what Mulder does and combing the information plane for more details of the elusive truth. However, the former lovers and partners are pulled back into the service of investigating the seemingly unexplainable by Joel McHale’s Tad O’Malley; think Glenn Beck/Alex Jones for the “paranoid about the paranormal” set. O’Malley brings the pair to a young woman who may or may not have been abducted by aliens and impregnated on multiple occasions. As Mulder and Scully threaten to unravel the facts, all three are bombarded by figures more dangerous than any they encountered during their time with the X-Files division. O’Malley’s involvement in their lives make the agents question everything as they come to realize that the autonomy and lives of every single person on the planet hangs by the barest of threads.

Admittedly, it might difficult for me to separate my love of the series and my nostalgia to give a measured and fair assessment of “My Struggle,” but, damn, the episode feels like reuniting with old friends. While time might have changed the believer and the skeptic, Mulder and Scully feel very much like the characters we left them at the end of season nine. They play their parts not as caricatures of those past episodes—which, frankly, could have easily happened, given how many years removed Duchovny and Anderson are from their roles, no matter how skilled of actors they may be. With the X-Files division closed, Scully has returned to medicine, her original calling prior to getting mired in alien abductions and lizard people, and Anderson plays it with a cool resignation fitting her character. Meanwhile, with no tether to the outside world or outlet to professionally conduct his investigations, has become the stereotypical old hermit in the woods, waiting to be pulled out of retirement. Still, once O’Malley tugs at their curiosity to investigate aliens and government deception again, the two fall into their old habits, Mulder on the hunt for the paranormal and doubting Thomas Scully there to keep his more radical impulses in check.

However, Carter wisely acknowledges that these two are different from the agents we saw at the beginning of the very first episode of season one of The X-Files. While Scully can’t help but carry about her an air of skepticism, informed by her pragmatic outlook and medical training, she also has seen enough in her day—both as an outsider looking in and mired in the depth of the chase on a personal level—that she has grown an air of cautious belief. When listening to the girl’s story of alien abduction, she trusts, but verifies. While Mulder seems reinvigorated by the chance to partner with Scully again to dig at the government’s deceptive underbelly, time has mitigated his once white-hot pursuit of the Truth with a capital T. Truth might exist, but Mulder has learned that it’s often a journey, not a destination. And neither have shaken their compassion for the downtrodden and the despondent, no matter their level of belief in their sad tales. 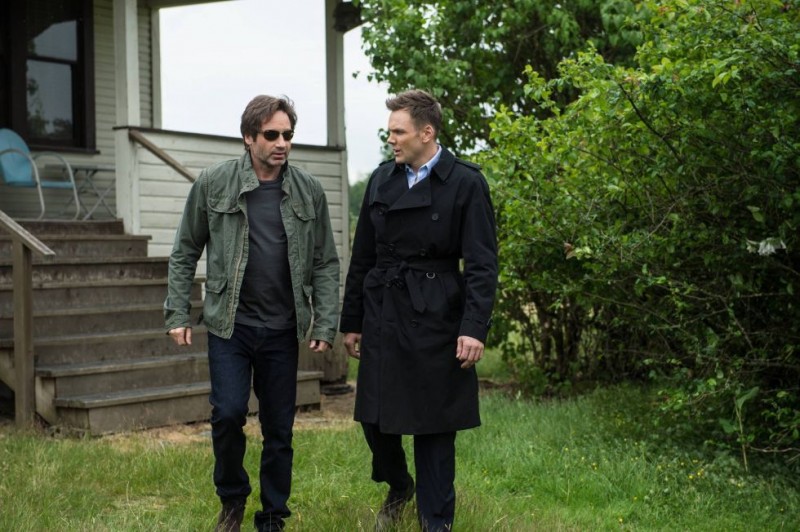 While having all this knowledge of the ins and outs of what came before in the nine seasons of the original X-Files run will add layers of depth and appreciation for this initial installment of the miniseries, what’s refreshing is that viewers don’t necessarily need to be able their Walter Skinners from their Cigarette Smoking Men in order to have an appreciation for the episode. A lot of credit for that user-friendliness is courtesy of the info-dump that Mulder gives in a voiceover just as the episode begins, ruminating over aliens and government misinformation and his and Scully’s time with the X-Files division. If you go in with a familiarity of why Mulder and Scully do what they do and how their experiences with the paranormal and the macabre inform their decisions, all the better. If not, newcomers won’t be particularly lost.

I imagine that’s largely by design: It’s been over a decade since we’ve had any new tastes of The X-Files’ world and, while folks who were ardent fans of the original series will surely turn up for this revival, there’s a whole generation who weren’t around during the show’s first run. The X-Files has held up rather well over the years, but it is very much a series of its times. Furthermore, since its finale, network TV and streaming series have seen a boom in fare that digs into material and uses atmosphere that were The X-Files’ bread-and-butter—Supernatural and Grimm immediately spring to mind. Carter straddles a fine line of attempting to entice older fans while pulling in newer viewers and, on the whole, that balancing act pays off.

That balancing act, ironically, is benefited by how much plotting and character development Carter calls on “My Stuggle” to carry. With only six episodes to work with, it’s as though the executive producer realizes how crucial it is to make every chapter to count. While the serialized format of a full season allowed Carter to dole out how much or how little of the alien conspiracy that acted as the overarching narrative of the series from episode to episode, he doesn’t have that luxury in this instance. As with Mitch Hurwitz’s issue with developing and shooting season 4 of Arrested Development on Netflix, Carter is working with actors who have other commitments and wrangling them under one project is feat enough. As such, there’s an urgency to the episode, an anxiety to the yarn that he might not have a chance to tell the story he wants to tell with Mulder, Scully, and the gang again. That anxiety, while sometimes making the story feel a bit erratic—sometimes the information exposition is jarring—it makes for very satisfying television. 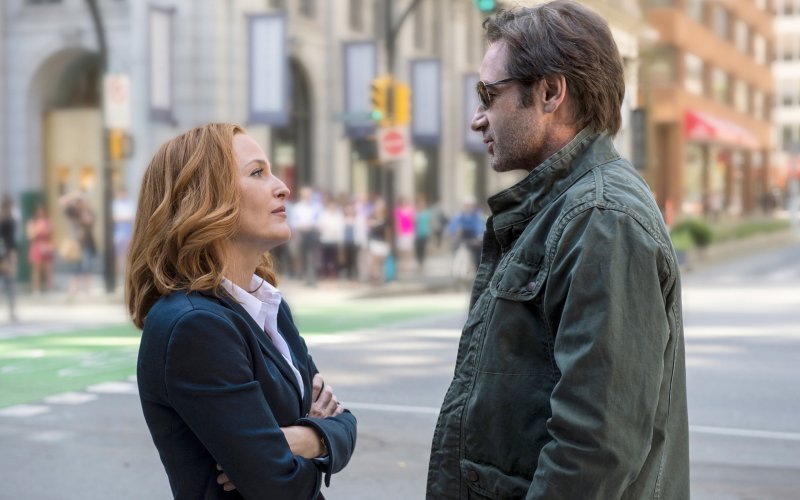 Satisfying and eerily relevant. Whether we are being manipulated by the government or not or if the truth is somewhere in the middle, Carter taps into those fears by addressing not one, not two, but a whole gaggle of conspiracy theories that permeate both speculative nonfiction and fiction alike. Are we being led around by the nose courtesy of the entertainment industry to create a docile populace? Are governments creating a constant state of warfare to maintain a heightened, ever-present sense of panic and fear so that citizens are more readily willing to acquiesce their rights for security? Is the endgame of governance just a smokescreen to keep those in control always in control? While Carter uses all of those threads to weave into The X-Files’ larger alien mythology to suggest that all that Mulder and Scully thought they knew was a lie, he can’t help but use those questions as a way to comment on the wider world about us. McHale’s O’Malley might be the result of one extreme of hyper-paranoia, but Carter seems to want us to think about why he might have a point.

Just as with the original series, the beginning of the new The X-Files miniseries expertly taps into the cultural zeitgeist of distrust of those who would govern us and suspicion that “they” aren’t telling us everything we need to know. However, rather than feeling like a retread, Duchovny, Anderson, and Carter construct a new tale that acknowledges that while the world is a very different place, there are always questions to be answered and people to be held accountable.

The X-Files miniseries premieres at 10:00 PM on Fox following the NFC playoff game.

Review: THE X-FILES Episode 10.1: My Struggle
Just as with the original series, the beginning of the new The X-Files miniseries expertly taps into the cultural zeitgeist of distrust of those who would govern us and suspicion that “they” aren’t telling us everything we need to know. However, rather than feeling like a retread, Duchovny, Anderson, and Carter construct a new tale that acknowledges that while the world is a very different place, there are always questions to be answered and people to be held accountable.
8.5Overall Score
Reader Rating: (0 Votes)
0.0