Cullen Bunn, Brian Hurtt, and Tyler Crook are three comic creators that have taken crafting new tales involving horror and the supernatural in their work and consistently bring engaging stories with new twists and turns to the next level. Among them, the three have worked on such series as Harrow County, B.P.R.D.: Hell on Earth, and The Sixth Gun, leaving their indelible marks on the comic book medium and the horror genre as a whole.

This is certainly the case with Bunn, Hurtt, and Crook’s newest miniseries Manor Black, premiering this July from Dark Horse Comics. A gothic tale of the supernatural sprinkled with soap operatic sensibility, Manor Black focuses on Roman Black, an adept magic user and patriarch of a family of sorcerers. As Roman begins to choose his successor—a feat already stressful enough—another young magician’s arrival in the Blacks’ Georgia town puts a kink in the works.

Manor Black harkens back to stories found in such TV series as Dark Shadows and, as Hurtt points out, an amalgam of The West Wing and The Addams Family. If you like your soapy fare sprinkled with a liberal dose of supernatural flare, Manor Black is certainly for you.

Misters Bunn, Hurtt, and Crook spoke with us recently about the idea behind Manor Black, building the world of the book, the series as soap opera, and what to expect in the miniseries going forward. 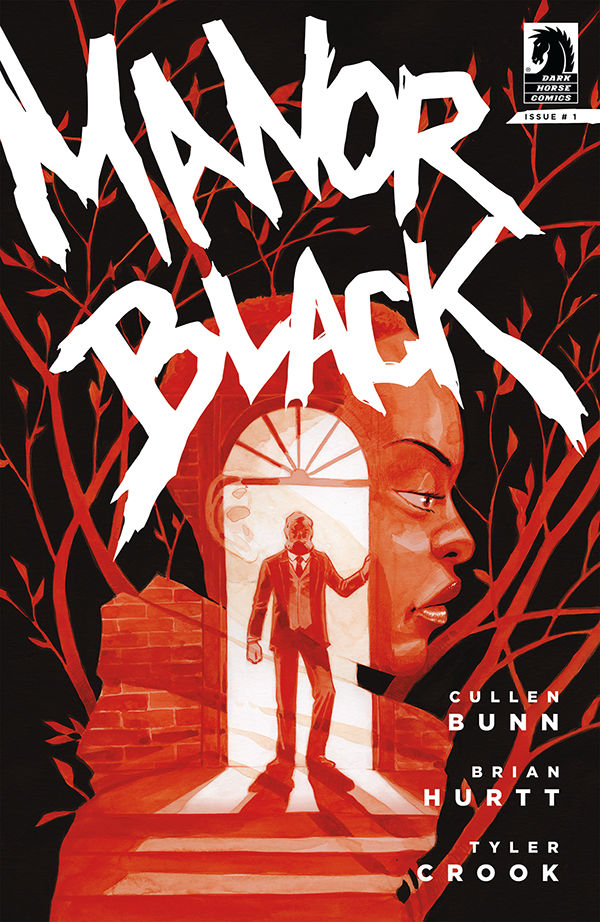 FreakSugar: For readers considering picking up the book, how would you describe the conceit of Manor Black?

Cullen Bunn: Manor Black is a supernatural gothic soap opera. In the book, we meet Roman Black, a powerful sorcerer who is nearing the end of his long, long life, and his family. They live in a dark mansion on the edge of a quaint south Georgia town. There, they practice their particular brand of sorcery–blood magic. Before Roman’s life comes to an end, he must choose a successor, which puts a bit of stress on his three children. This is complicated, though, when a young magician from another family shows up in town. She is in danger, hunted by a powerful adversary who has devious plans.

FS: Manor Black’s world seems so fully formed. What is the genesis behind the series?

CB: Brian and I have been kicking the idea for Manor Black around for several years. It’s a project we talked about frequently as something we wanted to do together. During all those discussions, of course, we sprinkled in layer after layer of world building. There’s a lot there, some of which won’t be revealed for some time. But until Tyler came on board, it was really just brainstorming. Tyler brought in ideas of his own, which only helped to more fully realize the concept.

Brian Hurtt: As Cullen said, he and I have been talking about this project for years–as far back as the early days of Sixth Gun. It was a bit of a different beast at the time and, to date it a bit, I remember we would refer to the concept as “The West Wing meets The Addams Family.” It’s evolved a lot since then and refined its focus. The story of Manor Black now leans much more heavily on the gothic horror angle and the “palace intrigue” of Roman Black’s family.

Tyler Crook: I’m happy to take all the credit, but these guys have spent so much time thinking about this world that it comes through in the script. All I got to do is draw it.

FS: The cast of the book feels already deeply fleshed-out and we’re just on issue #1. What can you tell us about the characters of Manor Black?

CB: A soap opera needs interesting characters! This book definitely has an ensemble cast. There’s Roman, Milicent, Reginald, Basil, and Lorelei–all members of the Black family. There’s Ari, the young mage who finds herself under Roman’s protection. There’s Harvey, the new sheriff. There’s the Stranger, our villain, and his crew. And there are dozens of minor characters who could potentially rise up as stars.  We wanted each character in the book to have very specific motivations, and I think those shine through even in brief appearances. Now, in the first story, our focus is on Roman and Ari, but future stories will likely focus on other characters.

BH: This is definitely a character-driven comic that will be defined by the personal impact our characters will feel from these larger-than-life circumstances they’ll find themselves in. As fun as all the magic and supernatural elements are to us, the real joy comes from making these characters as real and believable as we can, with motivations and desires that we can all understand. Even if we don’t agree with them.

TC: I think these characters are super fun to draw. We’ve spent a lot of time on the phone with me asking about Cullen and Brian how these characters think and fit into the lives of the other characters. I sure hope it comes across in the art that they are people are working through some stuff. 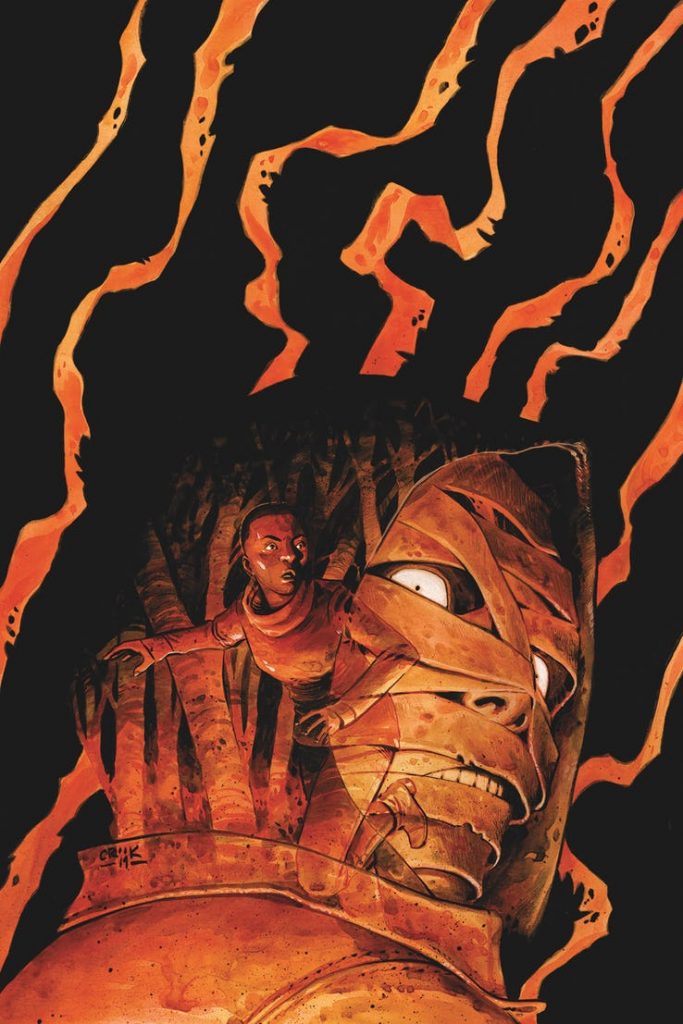 FS: The look of Manor Black is so appropriately creepy. How did you decide what you wanted the visuals of the series to be?

TC: The hard part of a book like this is making the world feel rich and lived in and real. The story is set in small town Georgia so I’ve spent hours doing image searches trying to find the kinds of details that I need. And I don’t even want to think about how much time I’ve spent in Google maps, using street view to scout for locations.

FS: Following up on that, are there any influences that impacted how Manor Black took shape?

CB: As always, I draw inspiration from everywhere. I pulled together an inspiration board early on that had images from Dark Shadows and American Gothic and Hammer horror movies and numerous gothic romance paperbacks.

BH: One of the reasons that Cullen and I keep working together is that we share a lot of the same genre influences and reference points.  Hammer Horror and Dark Shadows were referenced a lot as were many other gothic horror influences. But the DNA is pretty varied as we also find ourselves frequently referring to To Kill a Mockingbird, Twin Peaks, Game of Thrones, and on and on.

TC: I have definitely been thinking a lot about Dark Shadows. Although, I feel like the mansion set on that show was a little too kooky and spooky. But I really liked the way Barnabas in that show contrasted with the “normal” people around him. I’ve tried to bring that out a bit with Roman.

FS: Was there any type of research you conducted in the process of constructing the plot and the world of Manor Black?

CB: There’s always a bit of research that goes into something like this. Most of it, I think, revolved around making the community in the book feel realistic. I also did a lot of reading on ritual magic and schools of magic. Brian and I wanted to create a new system of magical rules for this world, and looking into the ideas that have come before helped quite a bit with that.

TC: I spent a ton of time scouting locations and figuring out what the local architecture was like and the local trees and stuff like that. But with any story in a contemporary setting the stuff that always seems to eat up my time is figuring out what kinds of stuff is on a sheriff’s belt and what to the street signs look like in Georgia.

FS: You seem to be throwing so much into this series. What has been the best part of working on the book?

CB: Aside from working with a couple of creators who I would greatly admire even if they weren’t my friends? I just love building a new comic book world from the ground up. There are some really cool ideas that we’ve been developing for this world, and I can’t wait to share them!

BH: I have to pinch myself a bit. Cullen and I starting picturing Tyler as the artist from the early days of its development. This was long before Harrow County and all of his Sixth Gun work he did with us. So, to finally see this project manifesting the way it is has been a bit of a dream come true!

TC: Yeah, working with Cullen and Brian is super fun.

FS: Have your past works influenced how you approach a book like this?

CB: I’m not sure if I can pick any specific thing. Every project I work on teaches me something, but I’ve never really sat down to catalogue all the lessons. I probably should.

BH: The main way that previous works influence any new title I’m working on is the desire to not repeat myself.  So, I tend to think of projects in terms of contrast–an act of reaching out for something new and different in the creation process.  For me, with this project, a lot of that is about pushing myself to accomplish some kind of verisimilitude with the characters and the world so that those personal or dramatic moments are earned.

TC: Every project informs the project that comes after it. So like Cullen said, it’s hard to quantify. There are tons of little production things that I’m doing to try to streamline the art process but hopefully it’s all stuff that no one will ever notice.

FS: Is there anything you can tease about what we can expect to see in the book moving forward?

CB: The world of Manor Black is much, much bigger than what you’ll see in this original series. There are deeper mysteries and greater revelations to be found! We have planned a long game with these characters, and their lives will get much more complicated and rich and dangerous. We have an entire universe of magic to be explored here.

BH: I suspect there will be a lot of blood and tears.

From the official issues description:

From the creators of Harrow County and The Sixth Gun comes this gothic horror fantasy about a family of sorcerers in crisis.

Roman Black is the moribund patriarch of a family of powerful sorcerers. As his wicked and corrupt children fight over who will take the reins of Manor Black and become representative of the black arts, Roman adopts a young mage whom he gifts his powers to with the hope that someone good will take his place against the evil forces out to bring down his family and legacy.

*  For fans of Dark Shadows, The Sixth Gun, Harrow County, and Locke & Key.