One of the most seemingly insurmountable obstacles during the process of growing up—and, often, once you reach adulthood—is finding acceptance: acceptance from authority figures, acceptance among your peers, and—maybe most importantly—accepting yourself. That issue is at the heart of writers Elsa Charretier (The Infinite Loop, The Unstoppable Wasp) and Pierrick Colinet (The Infinite Loop) and artist Magaux Saltel (The Sweetness, Welcome to Showside) in their new miniseries Superfreaks from the comiXology Originals imprint, available now on comiXology.

In Superfreaks, random people are granted superpowers from a magic ray emanating from a mysterious van. However, while the people of Earth revere the Mighty Van and its power, those granted abilities from the van are often treated differently. For instance, the world’s superheroes are lauded as celebrities and saviors, while their sidekicks are derided by the public and used as nothing more than gofers by the superheroes. However, when the world’s superheroes mysteriously vanish, it’s up to their put-upon teenage sidekicks to step and find their missing mentors. Will they be able to soldier on despite their own insecurities and feelings of isolation? That’s what Superfreaks—and, really, much of life—is all about.

Whether you’re reading the comic as a teenager currently grappling with feelings of not fitting in or you’re an adult remembering that struggle or you’re an adult still dealing with those issues, the creative team behind Superfreaks sees you, acknowledges your conflict, and wants to reassure you that things do get better, especially if you can find your tribe, your people.

I recently spoke with Ms. Charretier, Mr. Colinet, and Ms. Saltel about the idea behind Superfreaks, how the story shaped the look of the book, and the journey the teenage heroes take to find out and embrace who they really are—a lesson that is forever timely. 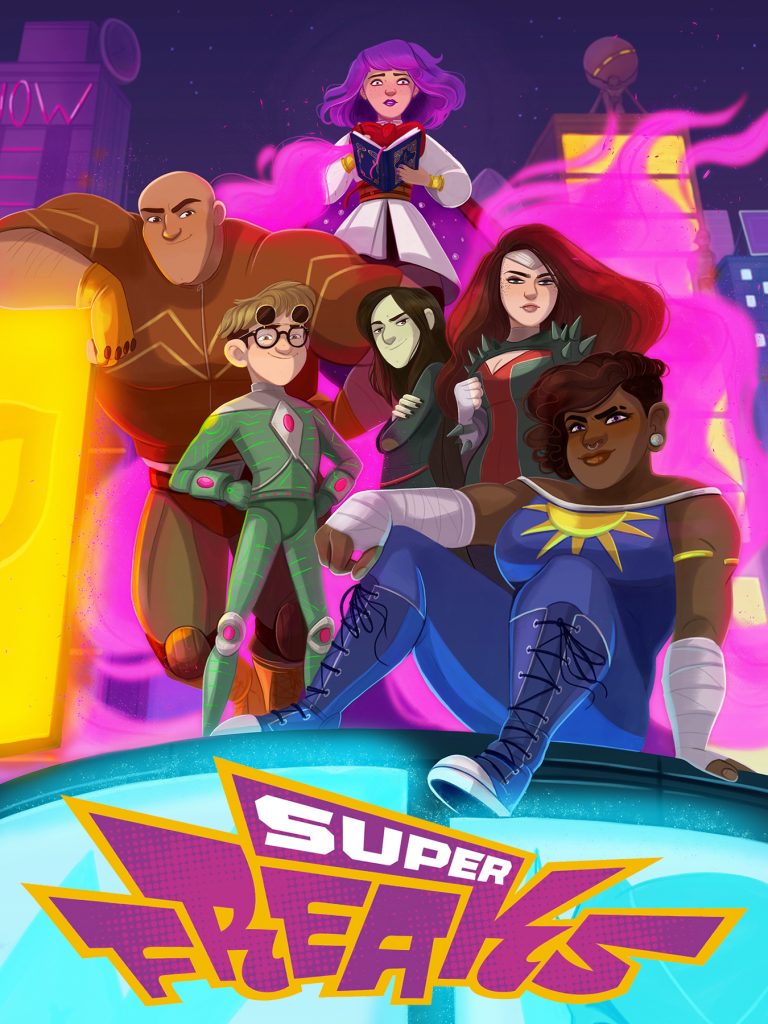 FreakSugar: For folks who might be considering picking up the series, what can you tell us about the conceit of Superfreaks?

Elsa Charretier: All of the world’s superheroes have gone missing, and it’s up to their untrained sidekicks to find out what happened and save the world from the biggest crisis it has ever known!
So, as you can see, the pitch is fairly fun and allowed us to pack the issues with action and delved into really interesting themes.

Margaux Saltel: Superfreaks is a superhero story in a lot of ways, but to me, it’s mostly about how to grow up and become an adult in a society that doesn’t accept us. 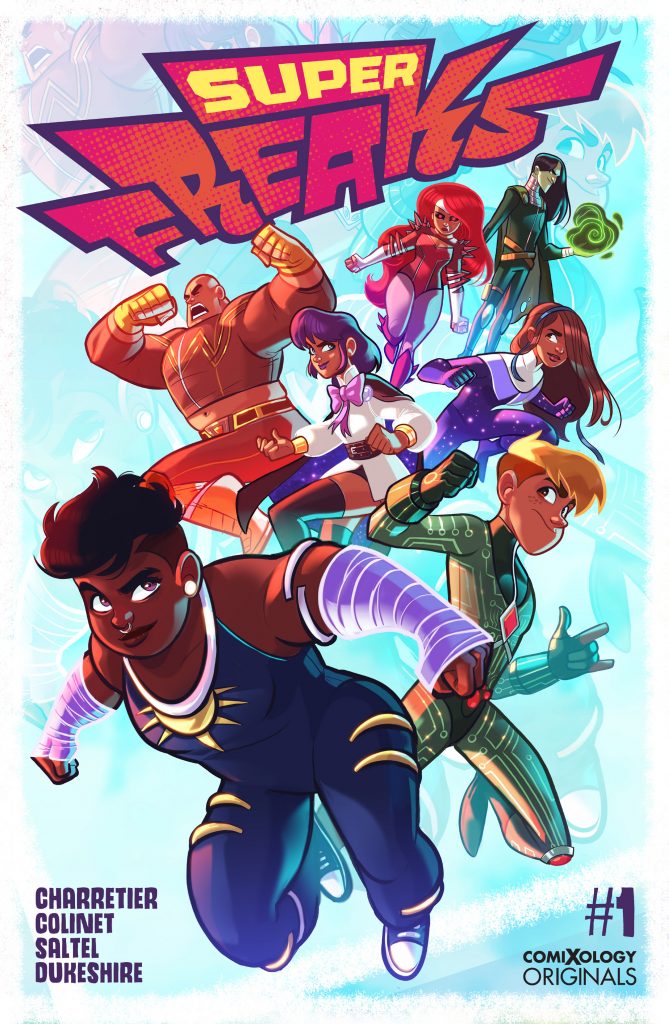 FS: Superfreaks is so inspired because it gives a look at the heroes behind those taking the glory for themselves. How long had the idea behind Superfreaks been gestating?

Pierrick Colinet: We began developing the idea about 2 years ago- which is pretty unusual for us. We tend to go straight to the board but we had to show a little patience for this one. Elsa and I mapped out the major part of the book in just a few days, then we brought in Margaux, and from that started to develop the story more in depth.

The book took a while to complete because we’ve been pretty hard on ourselves. Reworked scripts, reworked pages, improved things as we looked back on previous issues. But it never felt like a drag, working on that book was a blast from beginning to end. 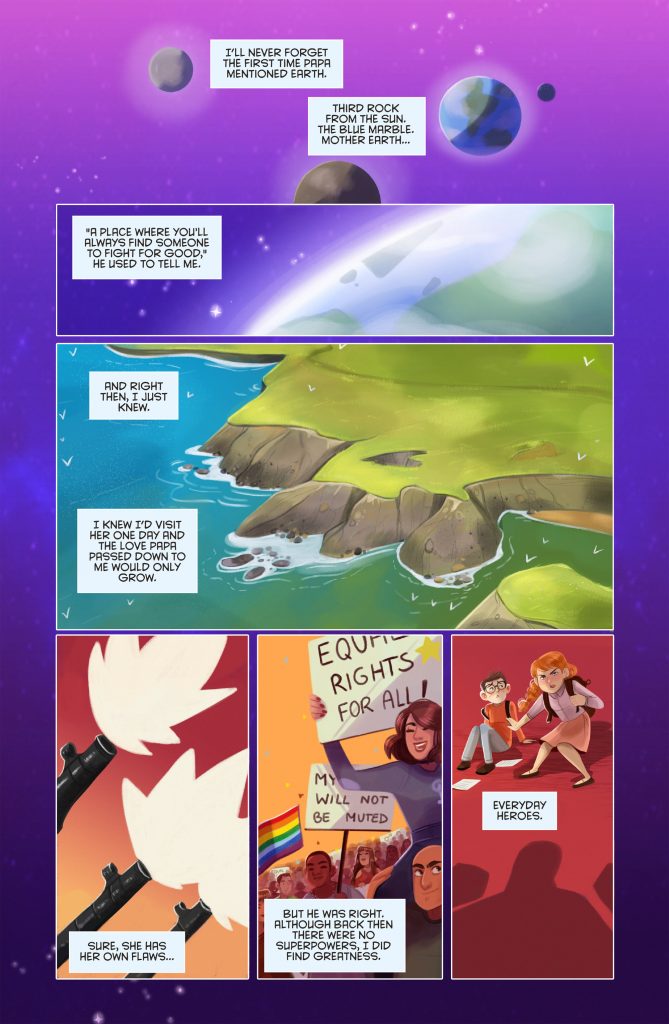 MS: The Mighty Van shoots his magic ray (that gives you superpowers) randomly. Since basically anyone can be a superhero, it allowed us to get away from the cliché of the perfect-for-the-job-super-ripped character. Our sidekicks are primarily teenagers -they range from 13 to 17- stressed out by school, relationships, bullying, and everything that teens experience and their designs had to translate that.

EC: Really early on we gave Margaux a quick summary of the characters- their names, powers, and the little things that make them who they are. With a team like that, you want a wide range of body types, you want them to balance each other out (both personality and physically-wise). And, most of all, like Margaux said, you want them to look like real people.

PC: What truly strikes me when I look at their designs is how well Margaux has captured their individuality. You look at them and you immediately get who they are- the strong and soft side of La Brute who’s outgrown his costume, the tech-ey look of Circuit’s and his big shy eyes, Garb’s greenish complexion. They’re all incredibly spot on. 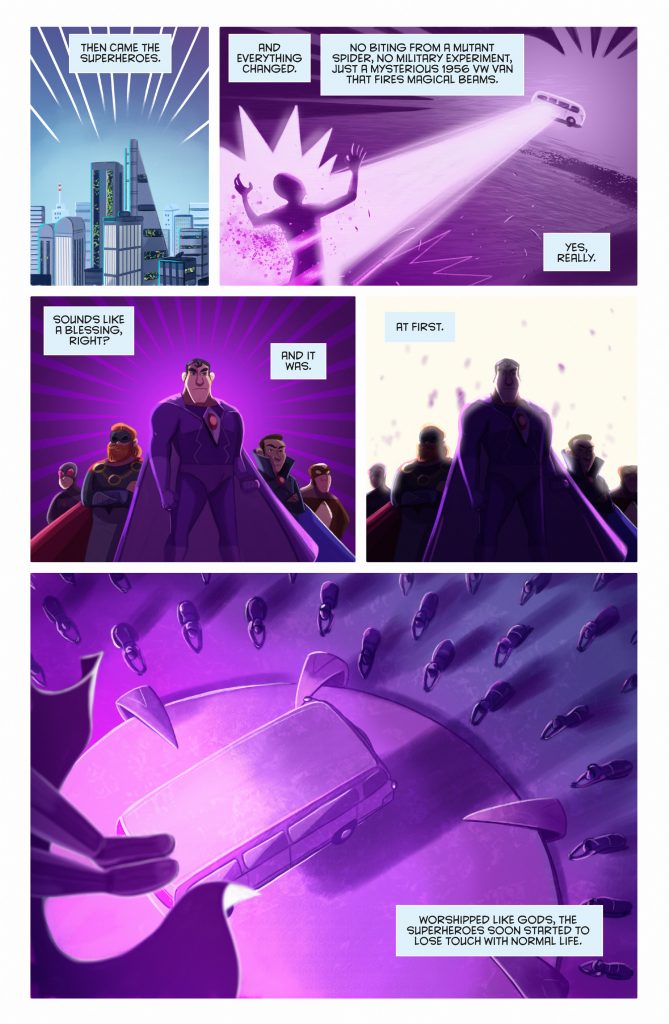 FS: As a former teacher and a former teen, you manage to nail how teens actually talk; it doesn’t feel stilted or juvenile—it feels very natural. Is there a particular headspace you get into when approaching the main characters’ speech?

PC: I actually approach young characters differently than I would adult characters. If you look at children and teens, their personalities are already pretty defined, they are not empty shells. Then it’s a matter of finding their motivations, how they interact with each other, what they want, like, dream of, are scared about. And kids have plenty of interior conflict! Once you know who they are, it comes out naturally.

FS: Something that particularly resonated with is the idea that the sidekick teens were made to feel small and thus began making themselves feel that way, too. It’s something that I know many teens grapple with—I know I did—and something that can sometimes creep into adulthood when we don’t expect it (*raises hand*). What was it about that aspect of being a teen that made you want to throw the spotlight on it in Superfreaks?

EC: Like you said, and it also echoing what Pierrick just said, most of our adult personality, anxieties, and fears are determined during childhood and our teenage years… and then we spend our entire life dealing with it! Our kids in Superfreaks are *different*- that’s at least how people see them. Blue Aura is taller and bigger than everyone in her school, Circuit laughs at his own nerdy jokes because no one else gets his references, Red has major anger issues and pushes everyone away. The moment they find each other, they embrace their weirdness, their difference and their friends help them turn that into a strength.

The earlier in life you find your community, your friends, the stronger you’ll be to face life and everything it throws at you. That’s what Superfreaks is about. 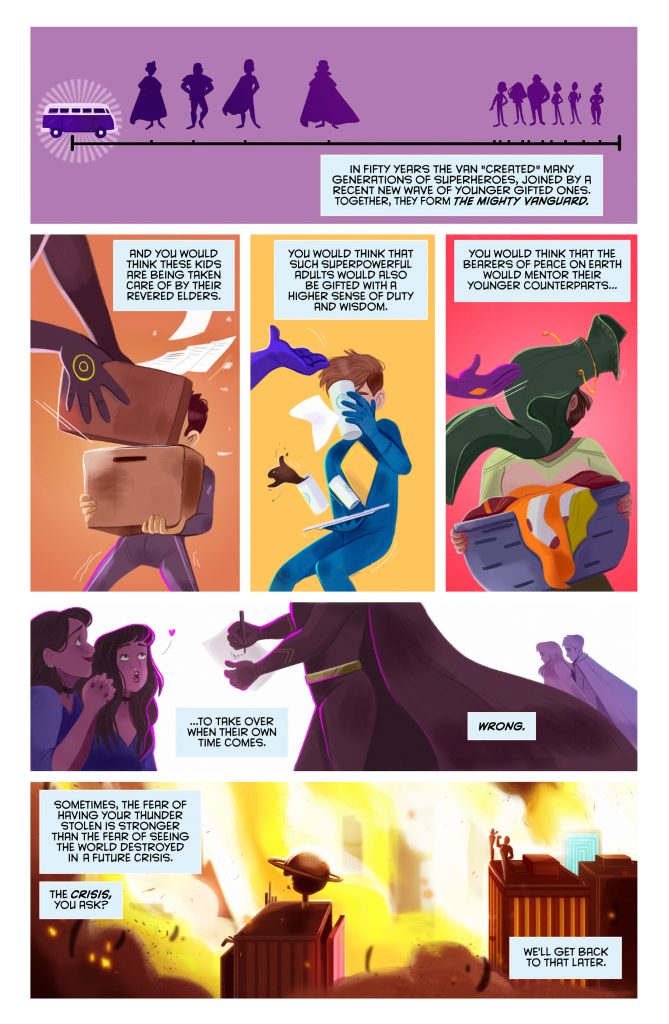 FS: Following up on that, did you feel yourself throwing your own experiences into the story as Superfreaks began to take shape?

MS: I think that unconsciously, what happens to them echoes our own experiences. We weren’t the cool kids at school. I think as creators, we have to talk about important issues such as bullying (or cyberbullying), eating disorders, or more generally having trouble accepting who you are.

PC: Exactly. As creators, and especially with a book like this one, you take from your own experience, but you digest it, take out the essence. It’s not an auto-biography per say, the kids in the book have their own lives, their own difficulties that are sometimes different than our own experiences, but there is something universal about teenagehood that we can still remember and can relate to.

FS: One of the themes that repeats itself in Superfreaks is the idea of nature vs. nurture and how our environments impact who we are and who we become. We become meek when we’re treated a certain way; “bad” people aren’t inherently bad or born that way; and so on. Not so much a question, but something I really appreciated about the miniseries.

EC: It something that you can observe from time to time. A kid will say something about themselves that you know is them repeating what their parents said. Whether it’s good or bad, it’s something they have been tough about who they are. Our book is about teenagers asserting their personalities, away from what they have been taught they are.

MS: Accepting that we are not all dealt the same cards is very important. Teenagehood is a moment we are quickly put in a box, and it can be very difficult to leave it, even as an adult. Seeing beyond prejudices, and listening to others is essential!

FS: One aspect of the book that resonated with me is your defense of millennials by using the sidekicks as proxies. Millennials get blamed for everything from the slump in the housing market to diminished revenues in the restaurant industry. What was it about either the book or millennials that made you want to address this blame game?

MS: Ha, the “it was better before”! Blaming the next generation of mistakes that we have made is always easier, and not necessarily the best thing to do. Millennials are the ones that make things happen and it’s good to be able to put it forward!

PC: Millenials are the most educated, eco-conscious and out-of-the-box generation so far. The world is grim (although that’s a matter of perspective) so it’s fairly natural people will try to blame the young ones, those are thinking, living and consuming differently, but honestly, how far into denial and hypocrisy can you go?

FS: The final issue ends on such a lovely, pitch perfect note, but do you have any desire to follow up on another story visiting the world of Superfreaks?

EC: Most definitely. I’d like to see where we can take them as they grow older and face different challenges.

PC: Absolutely. I miss them!

MS: These sidekicks have become our babies, and we want to make them live a lot of adventures!

Superfreaks #1-5 are available now on comiXology as part of the comiXology Originals imprint.

Get ready to binge read an all-new 5-issue superhero mystery debuting in its entirety with art by rising star Margaux Saltel, making her series debut, and written by Elsa Charretier and Pierrick Colinet (IDW’s Infinite Loop). Cover by Stephen Byrne.

All the world’s superheroes have disappeared overnight, and it’s up to their untrained, largely overlooked teenage sidekicks to find out what happened–while dealing with the biggest crisis Earth has ever known–much to the public’s displeasure. Can they save the day?