Dustin Runnels, aka Black Reign, aka Seven (for about 20 seconds), aka The Artist Formerly Known As Goldust, aka Dustin Rhodes, aka Chynadust, aka Dust Lovedust, aka Dustydust, aka Hunterdust, aka Flashdust, aka Marilyn Mansondust, aka Sabledust, aka Vaderdust, aka Goldust. This face-painted denizen of the squared-circle has continually been one of my favorite Superstars since his original debut in the WWE as “The Bizarre One” in 1995. Now into his second run with the company, Goldust is having a type of personal wrestling renaissance — doing the best work of his career, alongside his brother Stardust (formerly known as Cody Rhodes), and capturing the Tag Team Titles once again at last week’s WWE Night of Champions Pay-Per-View event. Now, after what seemed like an eternity, the latest wave of WWE Elite Collection figures form Mattel has hit shelves, and I was able to score a Goldust for my collection! Is he a worthy representation of Dusty Rhodes’ most outrageous offspring? After all, heavy is the head that wears the wig! Join me as I take a closer look at the WWE Elite Goldust Figure!

The packaging is the same we’ve seen all year. A nice window box that allows full-view of the figure, along with photos and a short bio. Nothing fancy, but I’m still digging the blue and white color scheme.

The bio from the back of the package:

Dressed in gold from head to toe, Goldust first made his dramatic debut in 1995. There was no denying that his showmanship was unparalleled, but it quickly became apparent that his in-ring skills were just as impressive. With the combination of agility and gamesmanship, Goldust defeated razor Ramon to win the intercontinental Championship. An unlikely pairing with Booker T led to a World Tag Team Championship reign. After a hiatus from the ring, he returned in October 2013 to aid his brother Cody Rhodes against The Authority. With their father, WWE Hall of Famer “The American Dream” Dusty Rhodes in their corner, the Rhodes brothers emerged victorious.

Wig is off. Go time!

The sculpt for Goldust features a lot of re-use. Nothing new for the WWE line, with the head being the only first-time part. I love the way the figure looks, and the suited torso works, but I would have preferred the high-collar over the lower one that is sculpted on. Thankfully, being all black helps to hide it. That’s it, really. Moving on.

Paint is where Goldust shines– almost literally! The figure is molded in flat black plastic with all of the gold detailing being purely paint apps. The figure I have is amazingly clean in that regard, with little to no overspray or janky lines. The face paint on the figure only covers the front (just like in real life, and Goldie’s blond mane can be seen from the back. It’s a little brighter than his bleach blond look, but no real harm there. The facepaint mimics his “Darth Maul” style that he sported up until last week and although my version has some over spray on one side of the mouth, it manages to make it seem like facepaint all the more! The back of his costume has the Goldust name in silver with small silver highlights, perfectly simulating his logo.

Slap To The Mouth!

Kicked Right In The Dick!

Just look at that face!

For the Pin– the Creepiest of Pins.

Articulation for Mr. Dust is the same as all other figures in Mattel’s WWE Elite Collection– which is pretty damn great! Ball-joint head, swivel/hinge shoulders, swivel biceps, hinged elbows, swivel/hinge wrists, hinged torso, swivel waist, ball-joint hips, swivel thighs, dual-hinged knees, swivel boot tops, and swivel/hinge “rocker” ankles. All of the joints are tight enough to hold their positions, but are also easily moved. I DID have to apply some extra pressure to get the right ankle joint moving freely– something to keep in mind, that a few seconds under a hairdryer can easily fix.

When it comes to accessories, Goldust is continuing Mattel’s amazing, and much-loved, trend of including as much in the package as they can. Goldust comes equipped with his wig (that he sadly wears less and less these days), and two different sleeveless shirts emblazoned with his latest designs straight from WWE Shop. The wig is a re-release form Goldust’s much earlier Elite figure and fits his head snugly. The shirts simply slip over the figure’s head and hang down like a sandwich-board. I prefer the gray Brotherhood shirt if only for the fact it looks so good on the Cody Rhodes figure. Would I have preferred a Tag Title instead of these accessories? Yes, but I guess that leaves them something to toss into a future release. 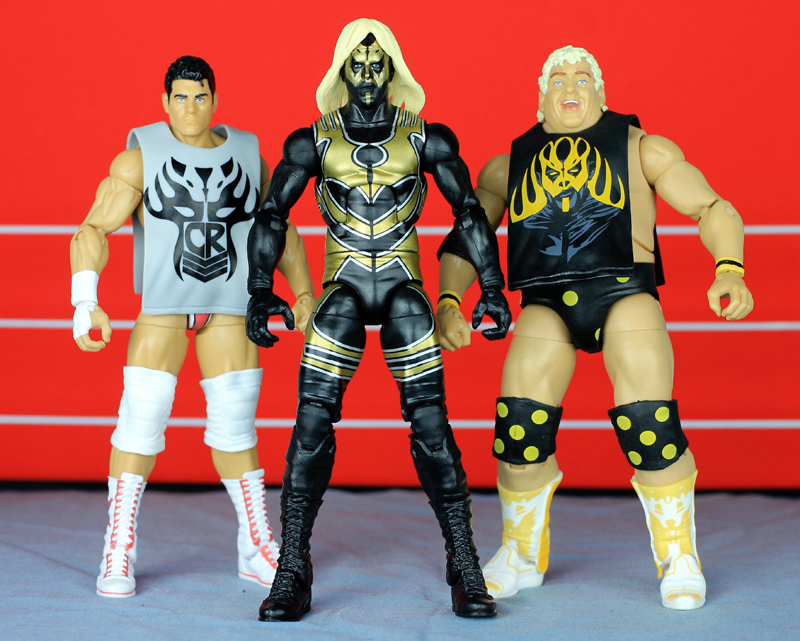 This has been a busy year for action figures in general. but I can safely say that this WWE Elite Collection Goldust is one of the best toys I’ve picked up all year. It’s an accurate representation of the character, with nice articulation, and accessories that make sense. Now where’s my Stardust?!