With X-Men: Days of Future Past hitting theaters May 23, we at FreakSugar know it’s often difficult to decide how to dress for your opening night outing to the mutant event of the year. (Okay, the only mutant event of the year. I mean, I suppose the scientific community might chirp up and say that, technically, mutations happen all the time in nature, so it’s really difficult to pinpoint what constitutes a significant mutant event. Hell, is it presumptuous to rank in importance a star-studded moving talkie picture over what’s happening in the natural world? And furthermore, isn’t the new Teenage Mutant Ninja Turtles film debuting this summer, too? I think Michael Bay might balk at the idea that the X-Men movie supersedes–) [Editor’s note: It’s usually best to just let Jed get this out of his system.] When debating what to wear to your chosen viewing of X-Men: Days of Future Past, you might want to get in the spirit of the film by dressing in all of the accouterments of Marvel’s merry band of morose apocalyptic mutants. Luckily for you, we’ve hopped across the Internetz to help you snatch up the finest attire and ensure you look like you belong in a dystopian future– and not in some fanfic author’s Twilight-esque wet-dream, in our X-Men Style Guide!

When crisscrossing the myriad of possible future timestreams, you never know what trials and tribulations you’ll encounter along the way: mutant-hunting robots, bigoted despots, or a cold chill. While you can’t always prepare against the threat of robotic-death from above, you can ensure you don’t catch your death of a cold by layering. Just ask Bishop, the energy-absorbing X-Man of the future, who protects himself from the dangers of strep or a sentient evil superflu (and looks fabulous doing it) by sporting an oversized neck scarf. If you want to wear an accessory that makes you look equally at home in Paris on a brisk autumn day or in the charred hellscape of a toppled Chicago, check out the HDE Premium Arab Shemagh Fashion Scarves featured on Amazon. They’re billowing, bright, and will help to forget the blight the government has left on your life. 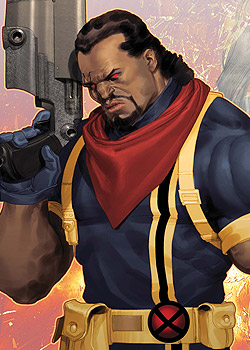 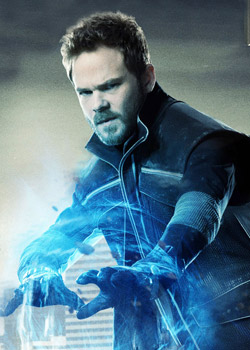 The future is a mystery. We can read tea leaves or rifle through chicken bones or call Ms. Cleo to secure a direct line to days beyond this one, but the fact of the matter is that the future is ethereal and inscrutable. As inscrutable as the reason a tall Australian would be cast as a short, squat Canadian scrapper. Inscrutable like why Bryan Singer thought “Lex Luthor wants land again and Clark Kent is a deadbeat dad” would be a great plot for a Superman movie. As such, it might be unfathomable to we folks of 2014, still grunting at obelisks like wild howler monkeys, why shoulder pads would come back in vogue. Or should I say, shoulder pad, singular, because, as you can see, Cable of the X-Men is sporting a lone shoulder pad with a fierceness that would put the cast of Dallas on edge. We can only assume that in Cable’s broken mirror of a future, the producers of Project Runway have been forbidden from participating in public discourse on the topic of fashion, allowing every Cable-come-lately with a glint in his eye and a robotic spring in his step to dress as he pleases without judgment. You can find a more refined, less clunky shoulder pad that won’t impair 50% of your peripheral vision on Etsy. 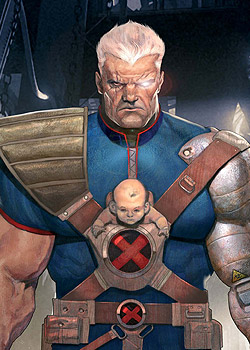 Utility is key when living a life on the run. The more Spartan you can live and the less you can do without in a totalitarian future, the better off you’ll be and the more you’ll avoid becoming a splattered footnote on the windshield of history. With that in mind, a future dissident of the state would be best served choosing his outfit wisely, both for efficiency and for usefulness. As such, the most obvious choice of clothing to make the cut would, of course, be the leg belt. As seen on Mr. Fashion Plate, aka Cable, making his second appearance on this list, the leg belt serves a wide variety of functions. It—er, acts as a belt for the leg to… keep… the pant leg from falling down? Is that right? And it can…hold the muscles of the leg in place? Shit, I dunno what leg belts do. Oh, wait! Leg belts sometimes have pockets, right? Little pouches to hold stuff. Pouches holding written rants about how “V for Vendetta” and “The Matrix” were totally right about how the future would turn out if you thought about it for long enough and let delusion set in. Pouches that can hold something as small as a speck of hope for a better future and something as large as the crushing weight of the reality that the future won’t ever have hoverboards– it just won’t. To look as dapper as Cable on opening night, check out Etsy for an exceptionally well made fantasy belt that looks to be ripped straight out of the comics. 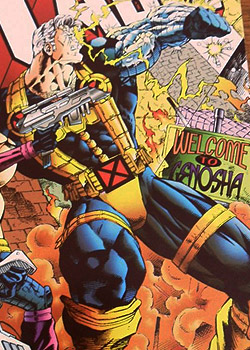 Who doesn’t like feeling pretty? Not me, certainly. It’s hard to pull myself away from the pale albino specter I see in the mirror every morning so I can go about my day. So, hey, I understand the need to gussy up and throw some spackle on the walls in order to feel more confident. That’s why I of course understand why future freedom fighters, whose only friend is the cover of night, would want to be as inconspicuous as possible. And what’s more inconspicuous than make-up? If you have to ask, then you need to stop reading right now, because this article ain’t for you! It should be obvious to anyone why a mutant like Blink, whose power to teleport in and out of spots quickly makes her an invaluable asset to her teammates, would wear bright pink make-up and pink stripes in her hair. And if you don’t know that reason already, I’m not going to spell it out for you. I’m not going to spell out the obvious reason why ostentatious facial markings and hair coloring are crucial tools to anyone wishing to remain under the cover of night and secrecy. It would just be silly to type it out, it’s so clear. But just so I know we both understand, you can feel free to tell me and I’ll tell you if you’re correct or not. In the meantime, if you want to follow Blink’s lead and attain that Covergirl-meets-doomsday look, check out Amazon for Mehron’s Liquid Face Paints in a variety of colors– including pink! 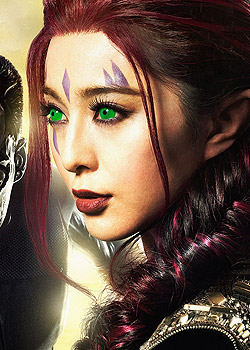