“Black Panther #1 finally gives us a T’Challa who, despite his wide-reaching achievements and abilities, is clawing his way to repair both his nation and himself. In the process, we will also assuredly see a character who will come out the other end of this hero’s journey a better and more nuanced man and monarch.”

Marvel Comics’ Black Panther perennially suffered a publication problem. Despite being one of the House of Ideas’ Jack of All Trades—superhero, monarch, technological futurist—King T’Challa has had issues sustaining his own series for any length of time. Not that creators haven’t tried. Christopher Priest’s lauded yet underappreciated run on a Black Panther title, while highly re-readable, didn’t give the ruler of the African nation of Wakanda the spotlight fans of the character and Marvel felt that he deserved.

It’s clear in recent years that the publisher has been making moves to change that to the best of its ability. The Black Panther has had a central role in several Marvel titles and events of late, including a key part in both New Avengers as a member of the Illuminati, in Avengers vs. X-Men, and in the latest Secret Wars crossover. Further, T’Challa is a key player in Marvel’s Ultimates series and will feature prominently in May’s Captain America: Civil War, with a solo film to follow in 2018. 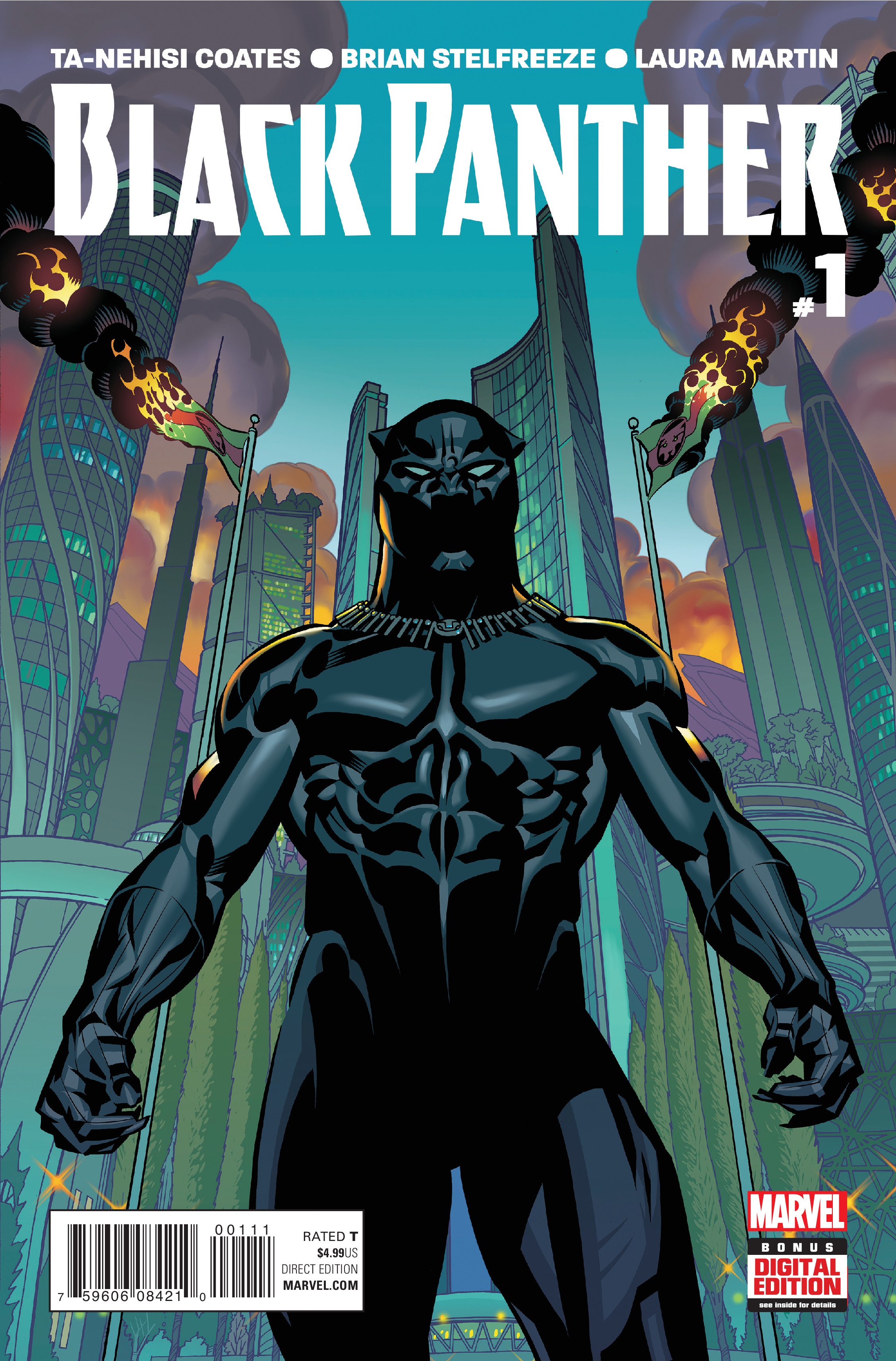 Black Panther #1 feels like the culmination of the painstaking foundation-building Marvel has been focusing on in the past decade to truly make T’Challa stand out as one of the comic book universe’s power players, not just in the stories themselves but among the fans who may not have taken a chance on the characters. With no less a pedigree than National Book Award winner and MacArthur “Genius Grant” recipient writer Ta-Nehisi Coates and artist Brian Stelfreeze manning the series, Black Panther #1 is the opening shot in what the creative team hopes to be a new chapter in a long-lived story about the Wakandan monarch and his people.

And, really, the co-stars of the series truly are the Black Panther and the people of Wakanda, as the story Coates wants to tell wouldn’t work without that symbiotic relationship between the two. In the Marvel Universe, the primary things that we’re told we need to know as readers to appreciate what the Black Panther is all about are that T’Challa is the pinnacle of excellence, in superhero derring-do and leadership, and that Wakanda is an achievement in technology and what a nation-state should be. 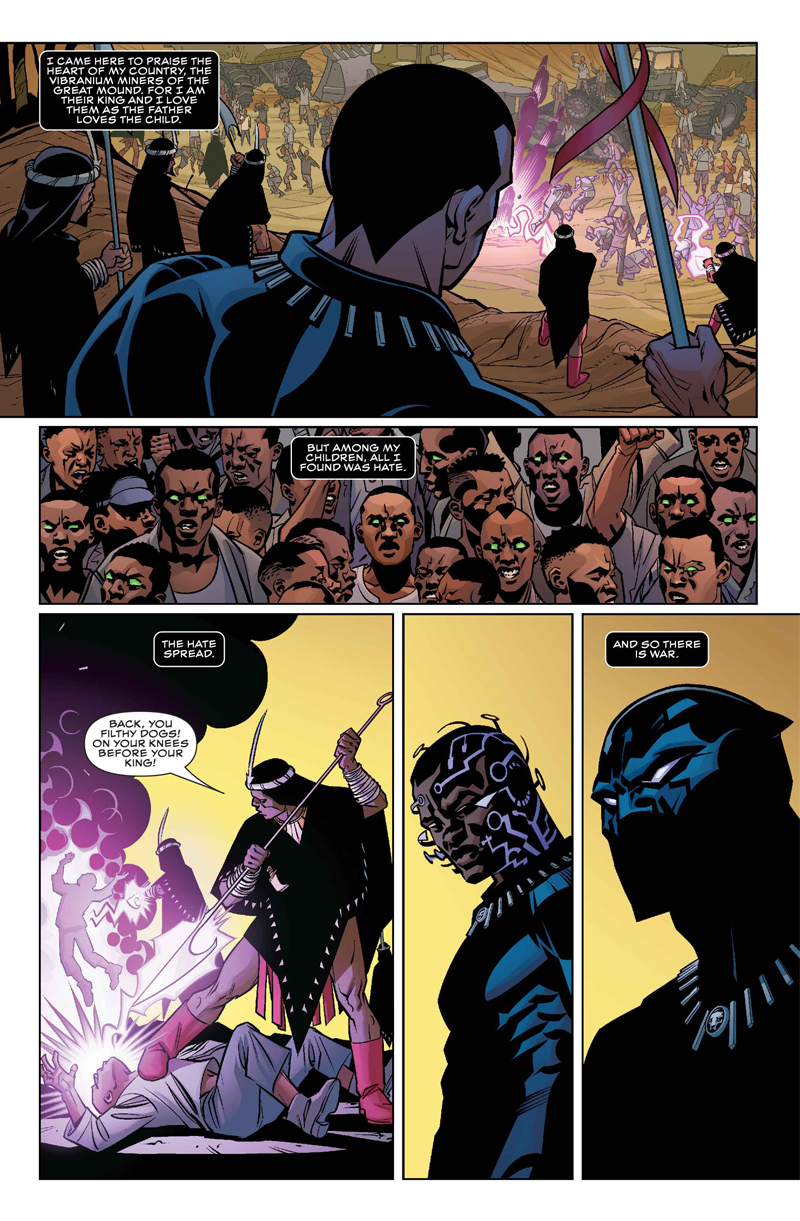 However, if you’ve been keeping up with any of the tales mentioned earlier, you’ll note that recent years have not been kind to the Wakandan people, as they’ve suffered travesty upon travesty. Prince Namor of Atlantis waged war on Wakanda, decimating much of the nation and killing thousands, while T’Challa’s sister and queen of Wakanda was killed in an attack by the mad titan Thanos during Marvel’s Infinity event. If the people of Wakanda are a people proud of the work they’ve accomplished to elevate their nation, then the current condition of that nation logically would have an impact on that pride.

That’s the smart move that Coates makes in the first chapter of “A Nation under Our Feet,” examining what happens to a country’s people whose pride is so intrinsically tied to its hard-earned achievements sees its country on a downward slide. With Wakanda’s people at an impasse, frustrated with the indignities they have suffered, the opening scene of rioting workers at the nation’s famed Vibranium mines is an exemplar of what happens to the soul of a nation at a breaking point.

As much as it’s always been a nice conceit that the Black Panther is both a successful leader and an all-star superhero, the lack of conflict there can be, well, plodding and boring. What happens when this man of excellence and a model of fortitude sees all that’s attempted to hold together is slipping through his fingers? The symbolism of a broken and bloodied T’Challa, injured and unable to stave off the unrest at the Vibranium mines, is a powerful nod that the superhero and monarch has a tough road ahead of him, one that will see how well his excellence can withstand the tests his nation faces. Inserting conflict into the lives of both T’Challa and his fellow Wakandans makes for compelling storytelling and makes me want to come back for another issue to see how well all of them walk the road ahead. 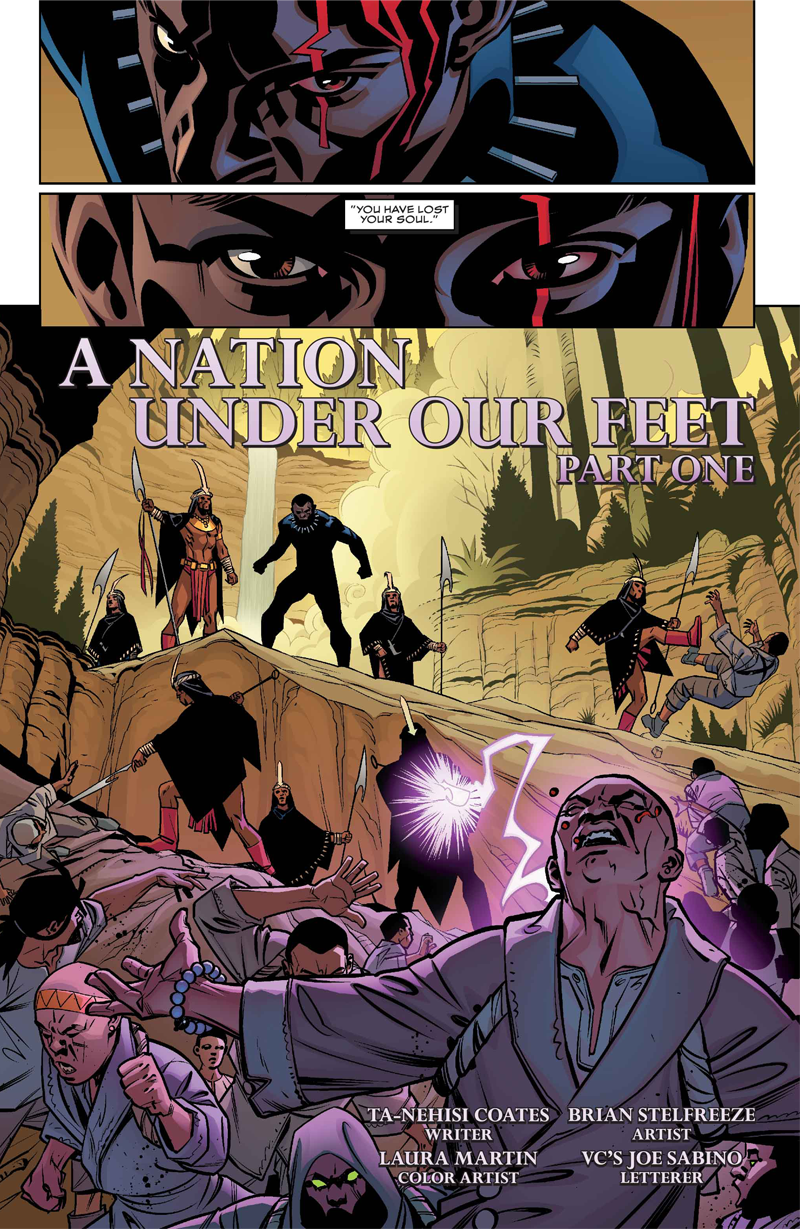 And while inasmuch as this is a story of a king and a nation’s redemption, the allegories to 21st century America and her people—particularly African Americans—can’t be ignored. What happens to a nation in which so many of its citizens feel battered, broken, and disenfranchised? What does it do to the soul of a country when so few feel as though their government won’t or can’t put out the flames of poverty and violence? Coates’ posits these questions without them ever once feeling heavy-handed or glaringly sophistic.

Although enough can’t be said about Stelfreeze’s art—particularly the juxtaposition of the natural beauty of Wakanda and its technological marvels—what sells the crux of Coates’ tale is how much emotion Stelfreeze manages to pour into each of the characters. From T’Challa’s melancholy to the sadness of his mother to the frustration of the rioting miners, readers believe that Wakanda is at an emotional tipping-point, and the question is what will be the last straw for all involved.

Black Panther #1 finally gives us a T’Challa who, despite his wide-reaching achievements and abilities, is clawing his way to repair both his nation and himself. In the process, we will also assuredly see a character who will come out the other end of this hero’s journey a better and more nuanced man and monarch.

Advance Review: BLACK PANTHER #1
BLACK PANTHER #1 finally gives us a T’Challa who, despite his wide-reaching achievements and abilities, is clawing his way to repair both his nation and himself. In the process, we will also assuredly see a character who will come out the other end of this hero’s journey a better and more nuanced man a nd monarch.
9Overall Score
Reader Rating: (2 Votes)
9.5