New publisher Ahoy Comics, which officially launched last month, asks us to “Expect more” in its motto, and “more” is, without a doubt, what the creators have given their readers. Between an examination of heroics and alternate realities to a dead man disinterested with Heaven, Ahoy is pushing the idea of what readers should expect from their comic book experiences.

That idea has been applied to last week’s debut of Captain Ginger, written by Stuart Moore, with art by June Brigman, inking by Roy Richardson, colors by Veronica Gandini, and lettering by Comicraft. Captain Ginger follows a cast of evolved felines as they learn how to pilot a spaceship. This learning curve is paired with the realities of attempting to use technology not designed for anthromorphic cats as well as feeling their way around as they attempt to explore the mysteries of the universe and how they evolved.

We spoke with Mr. Moore recently about the conceit of Captain Ginger, the research behind bringing the feline crew to life, working with June Brigman and the rest of the creative team to construct a defined, lived-in world, and what we can expect to see in the series going forward.

And be sure to check out our exclusive look some character designs from Captain Ginger by series artist June Brigman! 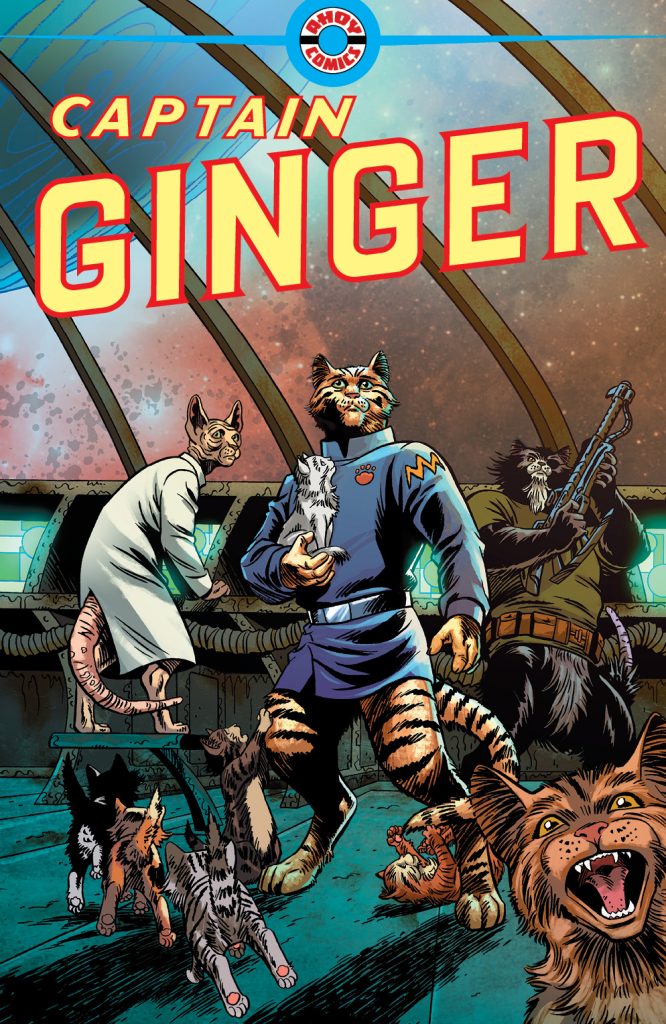 FreakSugar: For folks considering picking up the book, how would you describe the conceit of Captain Ginger?

Stuart Moore: Quickly: If you’ve ever wanted to see your favorite furry pet put on a bubble helmet and fight aliens, this is the book for you.

More specifically: It’s a grand-scale space adventure story with an all-feline cast. There’s a reason they’re in charge of this starship, and as the series progresses, we’ll see them grapple with the mysteries of their existence. While licking themselves and taking naps at inappropriate times. 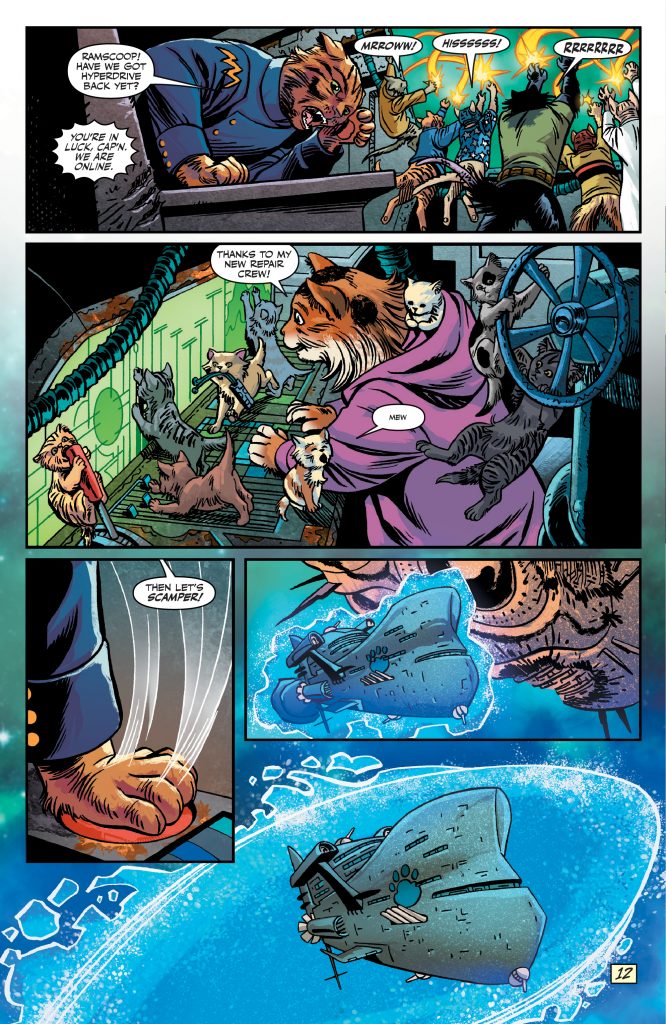 FS: In a short time, you introduce a wide array of characters, but all feel very fleshed out from the get-go and makes readers we’ve known them for a good while. What can you tell us about Captain Ginger and the rest of the feline crew?

SM: Thanks—that’s good to hear! Basically I took the usual naval/spaceship jobs—helmsman/navigator, engineer, that sort of thing—and mapped cat traits onto them. Most of it was fairly instinctive. Also, when you’re creating a universe from scratch, it’s remarkably easy to back up a few steps and change details when necessary.

The central conflict within the crew, at least at first, is between Ginger and his Chief Mousing Officer, Sergeant Mittens. Cats don’t take orders well as a rule, and Mittens is a pretty rough-and-tumble tabby. That power struggle plays out over the first few issues, while the crew is dealing with both external threats and problems aboard ship. 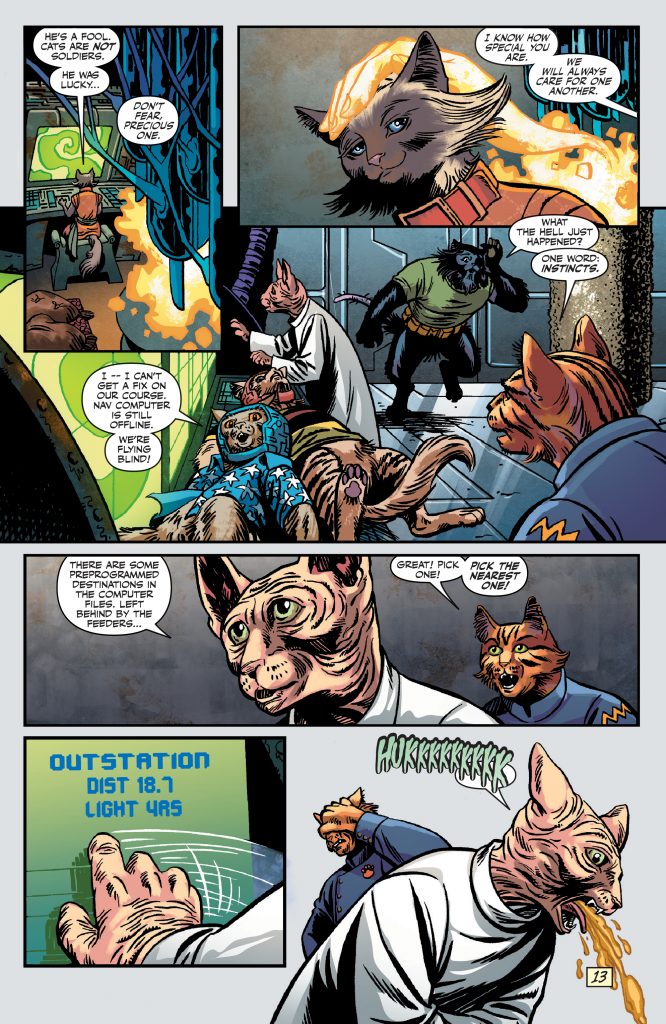 FS: Following up on that, this book feels like it’s been gestating with you for a while. What is the genesis behind Captain Ginger?

SM: I created it for June Brigman to draw. Simple as that. We’ve worked together before, I loved her work, and along the way I became aware of her love for cats. I’m crazy about them too—a lot of comics people are. 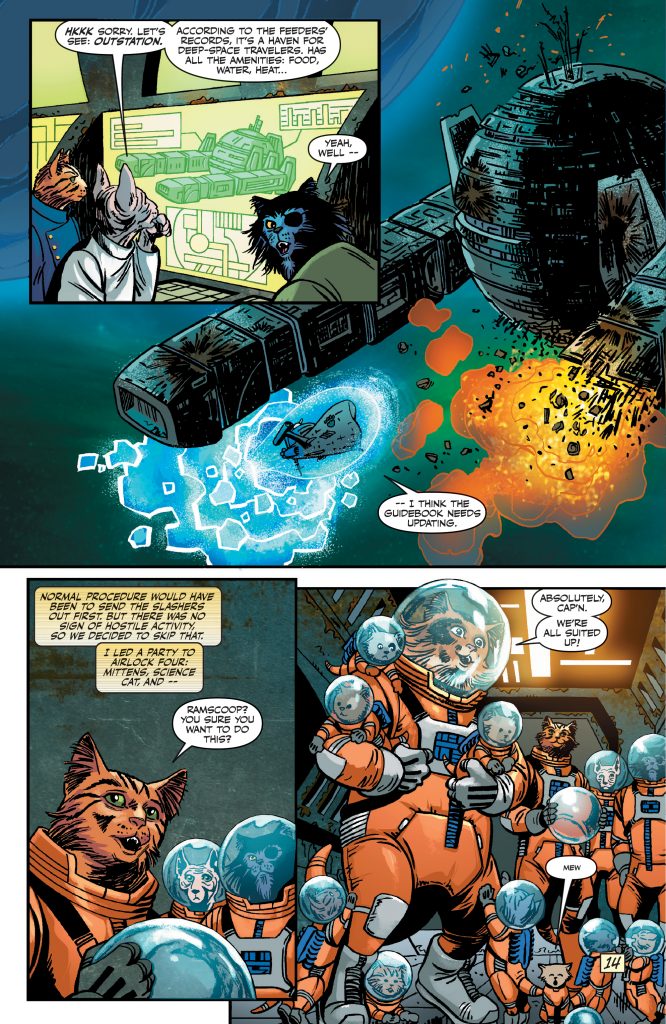 FS: The crew has a mix of fiercely feline and human personality which made me smile. What kind of research did you do in preparation for crafting the series?

SM: I’ve always had cats and I’ve read and watched a lot of science fiction. I’ve done projects where I visited libraries and interviewed people and spent weeks preparing, but—and this is a little embarrassing—Ginger wasn’t like that. I pretty much just dove right in and never looked back.

I did recently buy a new couch for my office, though. Now I have “research material” curled up there all day. Michael Moorcock once told me that writers are the only humans that cats really respect, because they tend to sit still for long periods of time. I think that’s true… they like artists, too, but there is that messy problem of ink. 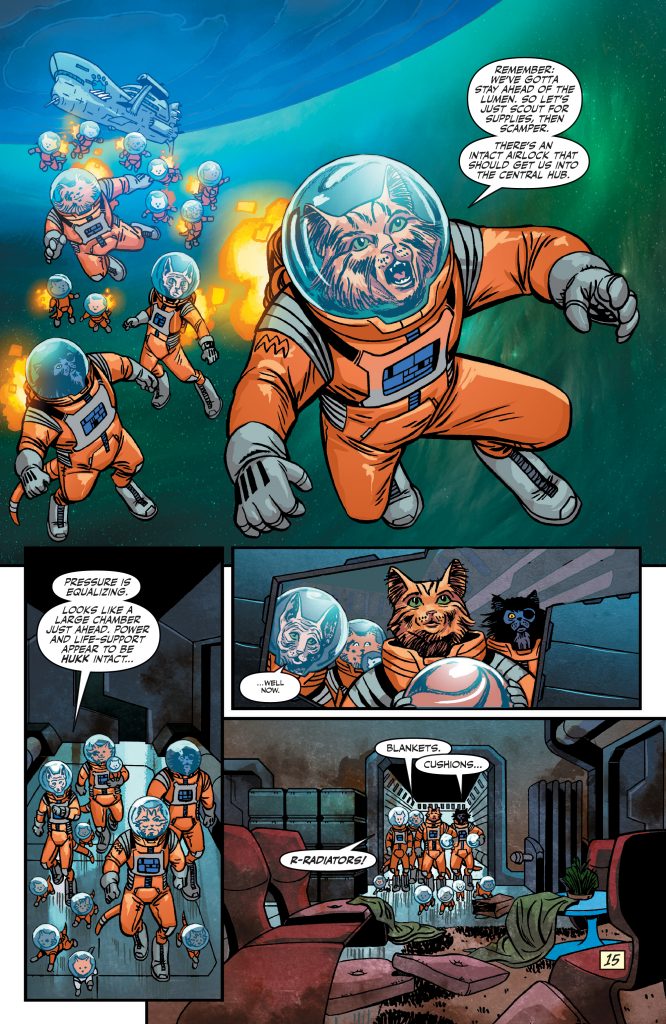 FS: Was there a process in how you chose which breeds to use and to assign to which characters?

SM: It’s actually hard to remember—the process was very fast and organic—but I think I left most of that to June. I know she decided to make Science Cat a hairless breed. The only crucial one, to me, was Ginger himself—partly because his name is in the title, but also because he’s the only ginger cat on the ship. Gingers are mostly male, so that brings up the question: Who was his father? 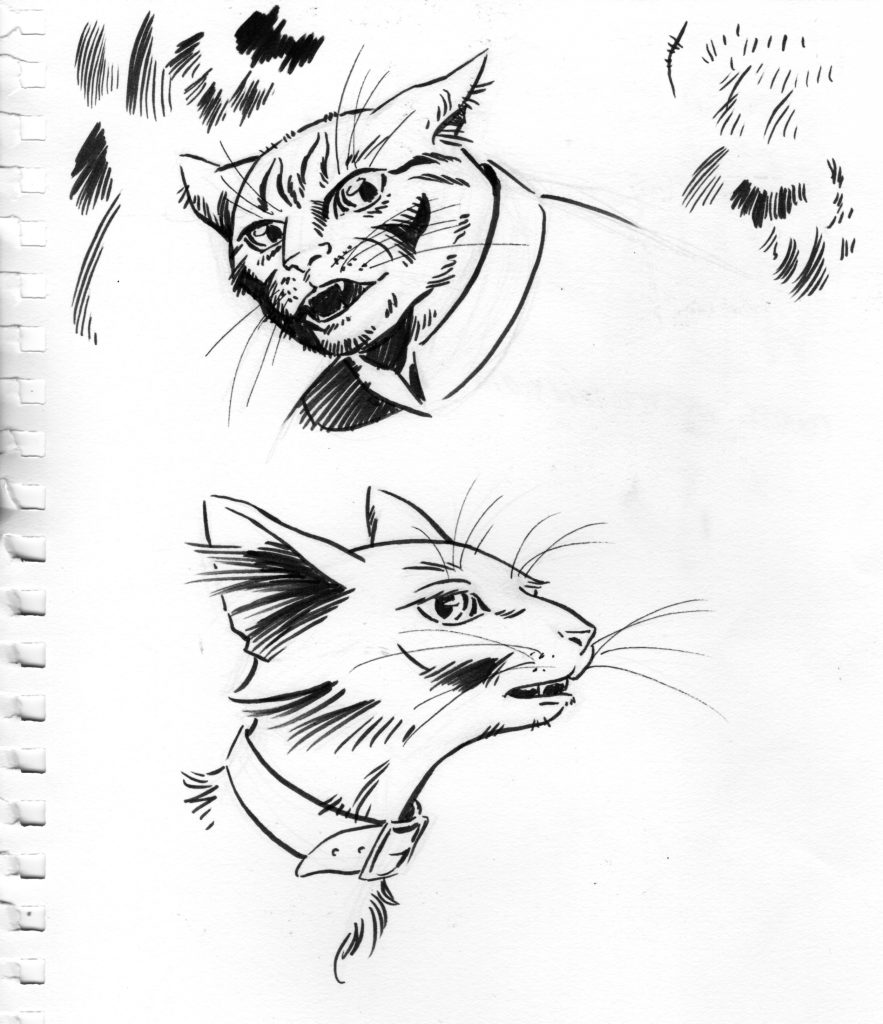 FS: The art is gorgeous, a mix of sci-fi and the grit of the reality on the felines’ ship. I got real Alien and Aliens vibes as I read the book. What is the collaboration process like with the rest of the creative team?

SM: That’s high praise (which I totally agree with!). It’s a time-consuming book—you can see the detail going into every panel. But everyone pretty much just does their work. June is married to Roy Richardson, the inker; they’ve worked together for a long time now, so their collaboration is pretty seamless. June selected Veronica Gandini as colorist, and she just gets better and better. Comicraft’s work is elegant and spotlessly accurate.

I’m editor of the book as well as the writer, but mostly I just have to make sure the work gets done—there’s not a lot of hands-on editing to be done. I don’t know if I’ve ever asked June to change anything… her storytelling is flawless and her character work is beautiful. 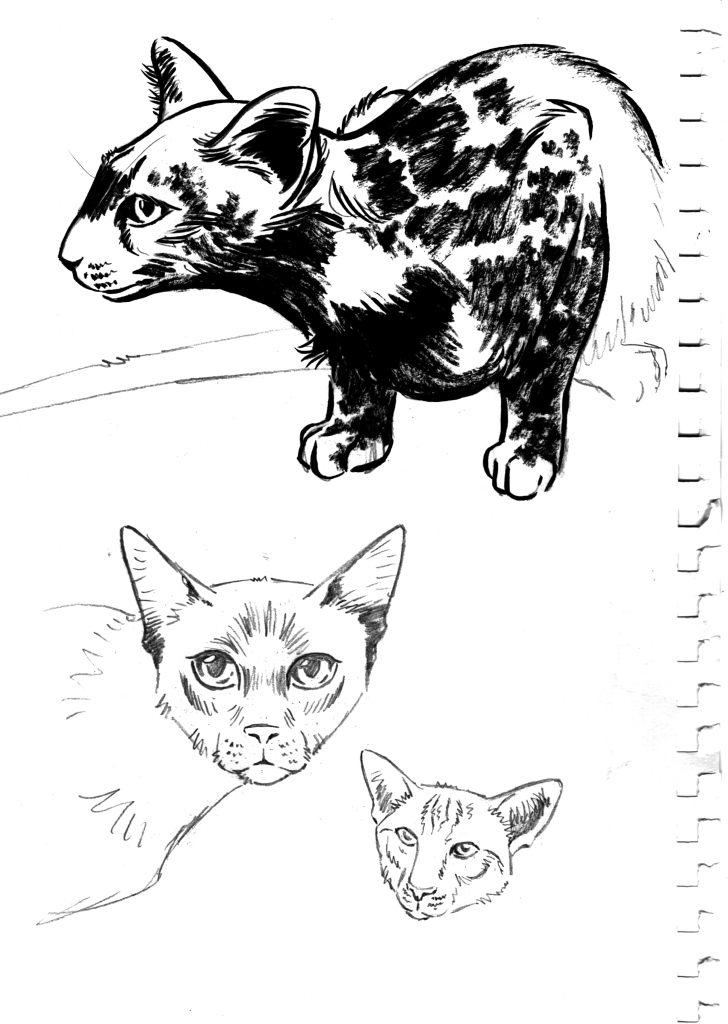 FS: As I read the book, I couldn’t help but think of other tales of anthropomorphic animals and this comic stands tall with that tradition. Are there any influences or stories that impact how you approach Captain Ginger?

SM: Oh, for sure. Off the top of my head: Carl Barks’s adventure stories, American Flagg!’s cat character, the original Howard the Duck, and the “underpeople” in Cordwainer Smith’s Tales of the Instrumentality. There are more. 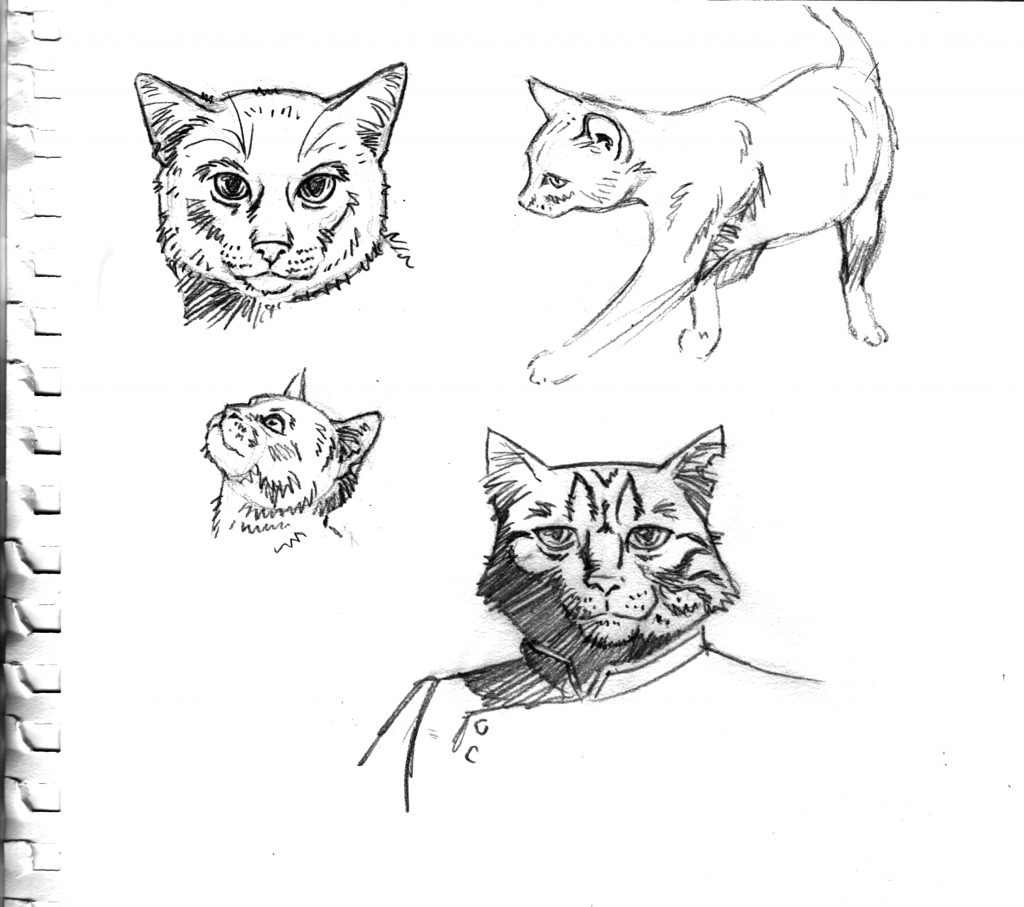 FS: We get hints about the origins of the evolved cats in Captain Ginger and what happened to the feeders sprinkled throughout the first two issues. Will you be delving into those details later in the series?

SM: Yes. Some of them sooner than you think. 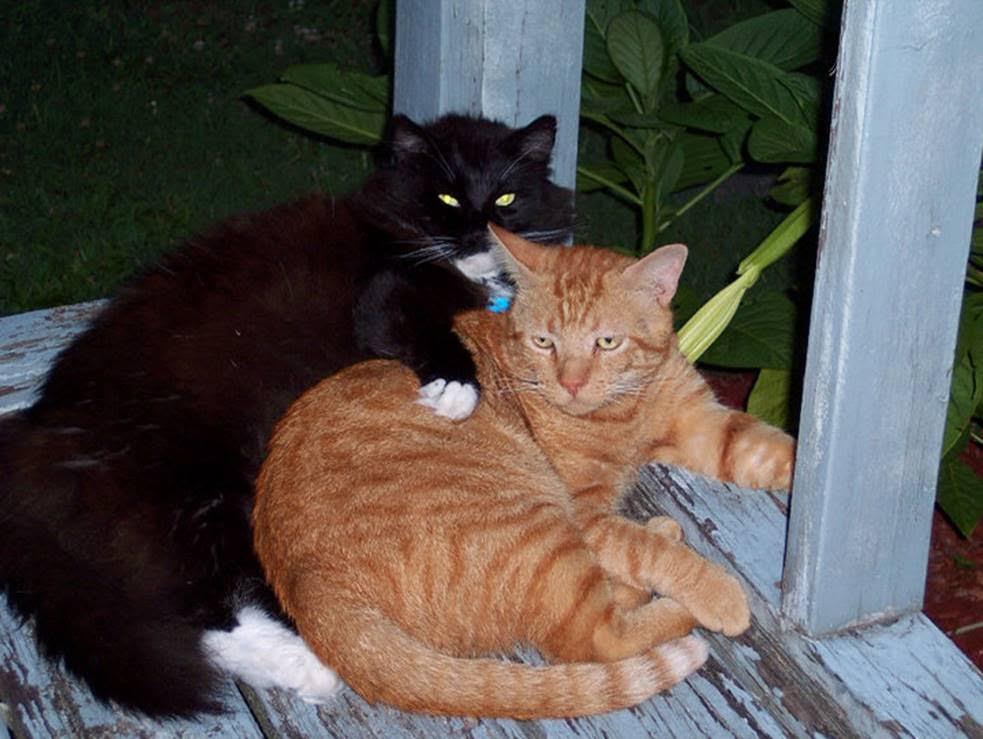 FS: Is there anything you can tease about what we can expect to see coming down the pike?

SM: In issues #2-4, the cats have to deal with a population crisis aboard ship. They’re not used to managing a society and living in a high-tech environment… they may need help, but who is there to help them? The answers may be surprising.

AHOY Comics has been very encouraging… they’ve given us every tool we need to make this series shine. We’re already planning stories beyond the initial four-issue series, some of which will be announced soon. We’ll do Ginger as long as people want it!