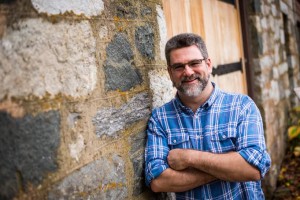 Writer Christopher Golden is no stranger to dallying with the strange and the macabre in his works. In his new comic book miniseries Baltimore: The Cult of the Red King for Dark Horse out this Wednesday, co-written with Hellboy creator Mike Mignola, Golden revisits Lord Henry Baltimore, monster hunter and defender against the machinations of evil. In The Red King, Baltimore is once again trying to stave off that threat to humanity, this time tackling the titular Red King, Father of All Monsters. Mr. Golden took the time to speak with us about his new tale, what motivates Lord Baltimore in his quest, and the differences between penning comics and novels.

FreakSugar: Baltimore: The Cult of the Red King is unlike many books on the shelves at local comic book shops. For you, what makes the comic stand apart from other offerings on stands?

Christopher Golden: Like the character, the series is fairly single-minded.  We’ve got a story to tell and we are telling it.  We’re not trying to make it last, to try to create something that will go on forever. Yes, there’s always the possibility that more could be done with the character years from now, but that’s not our goal. We have created a unique world, a very dark variation on the early 20th century of the world we know, and we’ve explored it and will continue to do so, but at the center of the series is the tale of Lord Baltimore and his crusade against the Red King, and when that comes to an end, so does the series.  Mike Mignola and I were talking about this yesterday, actually. What Mike has created at Dark Horse–the whole Mignolaverse, as they call it…I believe it’s one of the greatest achievements in comics history. I can say this because Baltimore is not part of that universe. Hellboy, BPRD, and all of those titles are components to a single overarching story, all pieces of a larger puzzle. It has never been rebooted or reset and it never will be.  Mike has an ending in mind and he and Scott and everyone else involved have been working toward that ending all along. When it gets here, guess what? The story’s over. That’s what we’re doing with Baltimore, only on a smaller scale.

FS: What can you tell the uninitiated about Lord Baltimore and his world?

CG: Quick version is this: During World War 1, Lord Henry Baltimore encountered vampiric monsters on the battlefield and fought and wounded one of them, who turned out to be Haigus, one of the ancient high priests of something called the Red King, who is the Father of All Monsters. Haigus caused a plague–both disease and vampire–to spread across Europe, bringing the war to a premature end. After Haigus murdered his whole family, Baltimore went on a quest to find and kill Haigus, thinking he himself would die when it was over. But over time Baltimore has been forged into something both more and less than human, more and less than mortal. He’s got a new mission: to stop the Red King from waking.  See, the Red King comes from a time before humanity, before gods, when all was chaos and horror. He’s stirring in his sleep, dreaming new monsters to life, but if he wakes up and enters our world…well, we don’t want that. So Baltimore understands that he has a job to do, and he takes the obligation seriously, but at the same time, all he really wants is to die. It’s a very happy, uplifting story.

FS: Is it necessary for new readers to familiarize themselves with the previous Baltimore books to appreciate The Red King?

CG: Absolutely not.  Everything you need to know to read the story from here on out, you’ll get in the first issue of The Cult of the Red King. Although Mike yells at me when I say that, so of course we all encourage you to go back and start at the beginning, with the collection of the first volume, The Plague Ships. And you should, certainly. It’s good stuff.  But you don’t have to.

FS: What was the collaboration process like with Mike Mignola?

CG: I’ve been working with Mike on various projects–books, comics, screenplays, anthologies, etc.–for about twenty years. The best part of it is that there’s a kind of creative freedom that comes along with Mike’s presence. He has this sense of wonder that allows for weird stuff to happen in stories without a labored explanation. He actively works against that sort of thing. I’m a plotter by nature, a guy who likes everything to be neatly tied up, so it’s always a little scary and very liberating to throw that to the wind and just say does it WORK? Does it feel right? Can it make sense in this world? 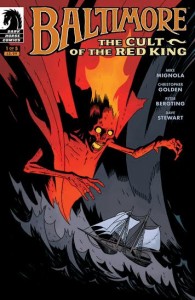 Baltimore: The Cult of the Red King #1

FS: The book focuses on the crew speculating on what troubles Lord Baltimore the most and what motivates him. Are any of them correct in their assumptions? What do you think pushes him to do what he does?

CG: I don’t want to parse too much of that conversation in issue one. I’d rather let the reader ruminate on it a bit. But down to the core, Baltimore’s a doomed guy. He carries that doom around on his shoulders and in his heart, and it’s heavy as hell. He has come to admire and even to actually like some of his allies, but even that seems too much to him. He doesn’t think of himself as a man alive, so he doesn’t believe there should be moments of lightness and levity and kindness or intimacy in his day to day experiences. Still, there are still a few things that tether him to the man he once was, to the life he led as a boy and then a young man, which is why we focus a little in this series on his friendship with Thomas Childress. His wife and parents and sister were murdered by Haigus, and in his heart he’s been dead ever since.

FS: In many respects, Baltimore’s laser-like focus reminds me of Batman’s war on the criminal element. Does Baltimore foresee a time when he can have some relief from his battles or will he always see monsters lurking behind every corner?

CG: Baltimore had hoped he would die once he killed Haigus. Expected it, in fact. Now he accepts that whatever power has made him its pawn won’t let him lie down and die until the Red King has either been destroyed or all of those worshipping him in our world are made to stop, so that he can’t threaten us anymore. He’s accepted that crusade as his own, but in the end, the only reward he wants is death.

FS: How do you approach writing novels versus writing your comic book tales? They’re different animals, I’m sure, but I was wondering what kind of overlapping elements from each can inform how you approach the other.

CG: You couldn’t find two more different writing disciplines. Of course you’re still imagining characters and writing dialogue and plotting things out long term. With comics, you have to deliver all of that in a more rigid structure, so that you think much more about what each panel and each page and each issue contributes to the overall character and plot arcs.

FS: With so many supernatural series hitting theaters, television, books, and comic books of late, why do you think we keep having such a hunger for tales of the macabre? How do you see the BALTIMORE tales as both being in the tradition of those tales and set apart from them?

CG: I could write hundreds of pages answering that question, but few fundamentals come to mind.  First, being frightened in cathartic. It’s good for us, emotionally.  Second, if you can believe for just a second in demons and the supernatural, then for that same moment you can at least imagine that souls live on after death, that this world is not the end. Third, this is a scary era we live in, and horror and the supernatural often allow us to process our real fears at a distance or through the medium of fiction. As for how Baltimore is both traditional and not…Mike and I have made no secret about the fact that Dracula and Moby Dick and other classic novels are in the DNA of this thing, just as much as Hammer films have been.

But I honestly think that the story we’ve built is textured and unique and the world this story takes place in is not something you’ve seen before. I was disappointed when the film plans fell apart but still really hope we’ll get a film–or better yet a television series–off the ground eventually. It’s a world in which World War 1 stopped short, soldiers threw their weapons down and went home because half of Europe was dying of plague and there were vampires everywhere. Now, as the story continues, the vampires are largely gone and all kinds of monsters are appearing, and covens of witches have turned to worshipping the Red King to enhance or gain power. Magicians and dabblers in the black arts have been calling into the abyss forever, but now there is a power that answers them. People still ride horses, but they also drive cars and trucks. It’s a world that has been frozen in the midst of shifting from archaic to modern and may never complete that transformation thanks to the horrors the Red King is bringing into being. 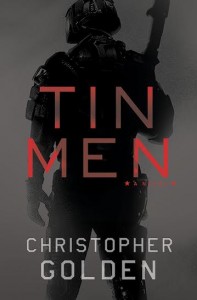 FS: Your novel Tin Men hits stores in June, with Dead Ringers arriving in November. What can you tell us about those?

CG: Tin Men is a near-future SF thriller about a U.S. army program that puts remote infantry robots into the field, drone-piloted by human soldiers in an underground base in Germany. With this tech, the U.S. has been intervening in global conflicts for years in order to safeguard the global economy, protecting its own interests by making sure the world doesn’t fall apart. But people don’t like being told what to do or being forced to make peace, and so an international group of anarchists have executed a plan not only to make the Tin Men obsolete, but to tear apart the world economic and political structure. Now one platoon of Tin Men is desperate to get back to their base in Germany in a gambit to hold onto their humanity, only to realize that they have a job to do before they can get home…save the President of the United States, and with him maybe any home of pulling America back together again.

Dead Ringers, on the other hand, is a straight up supernatural thriller. I don’t want to give anything away, as November is a while off, but I think anyone who dug my novel Snowblind will be very happy with this one.

FS: What can we expect in the next issue of The Red King, without giving too much away?

CG: In the first issue, we see that Baltimore has split up his crew to approach the problem of the Red King in two very different locations and in two very different ways. In the second issue, we start to learn that this was definitely the right move and that there are secrets to be unraveled…but that neither group is going to get through this unscathed. Blood will be shed.