Aquaman’s Atlantis has experienced some tumultuous changes in government over the years, but none may have been as catastrophic as that of Corum Rath seizing the throne. In the current story arc “The Kingslayer” in Aquaman, writer Dan Abnett follows Corum Rath as the Atlantean brings with his xenophobic, isolationist rhetoric a dalliance in dark magic that could prove ruinous for the whole of the underwater nation.

Mr. Abnett spoke with us recently about the state of Atlantis in part one of “The Kingslayer,” why he considers the story he’s telling a fantasy epic rather than a superhero tale, and what we can expect to see going forward in the story. 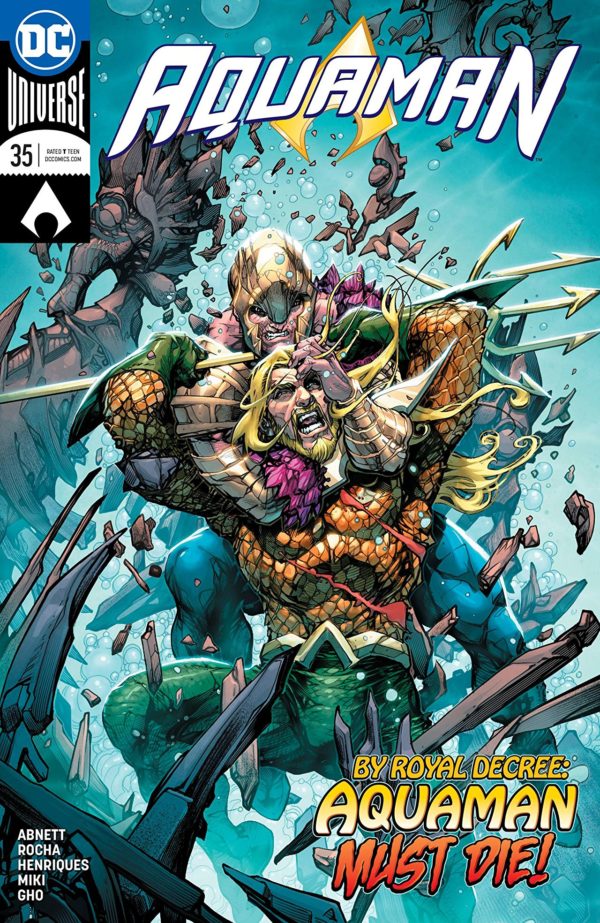 FS: At the beginning of issue #35, how would you describe the state of Atlantis, both her government and her people?

Dan Abnett: In utter turmoil. Corum Rath has seized the throne on a wave of popular support, but he’s more than a hardliner. His tyrannical attitudes and abuse of Atlantean magic have led to horror and catastrophe, and now a major civil war is raging as rebels fight to unseat him.

FS: As for Arthur, what kind of headspace do we find him in?

DA: Determined but desperate. He has no wish to resume the throne, but he wants to free Atlantis. He’s the rebels’ major weapon. But he’s not sure that even he can overcome Rath’s magic. 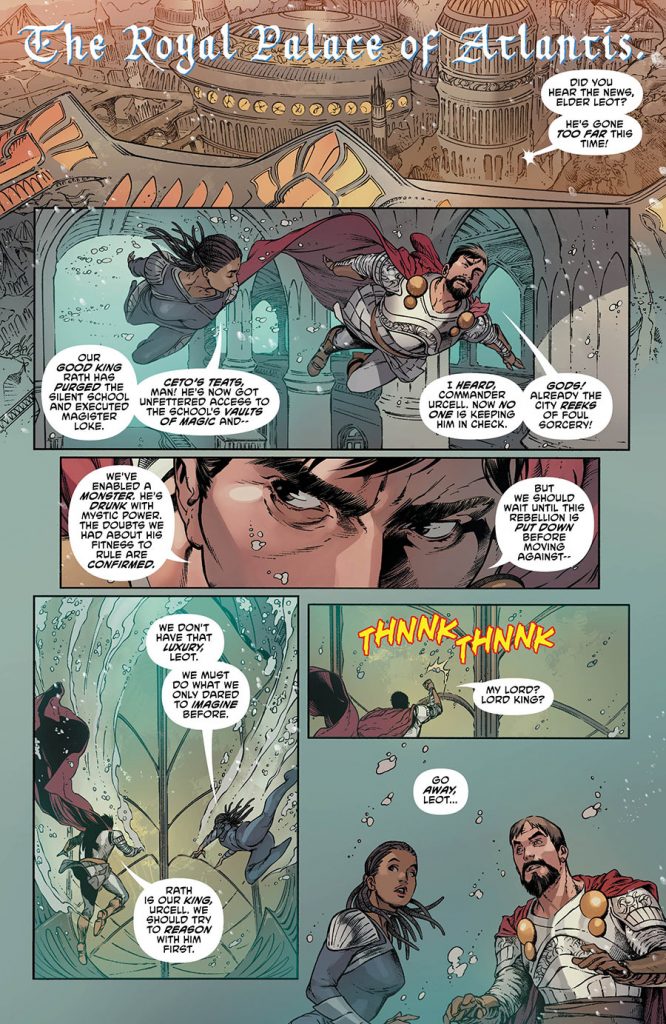 FS: I used to watch I, Claudius as a kid on Masterpiece Theater with my parents and the political machinations we see in Atlantis remind me of that series—and I mean that in the best way possible. How do you approach writing political drama in a story like this, where you’re balancing a populace disgruntled with their leader with the fantastical parts of superhero fantasy?

DA: I’ll take that! [laughs] Actually, I’ve really thought of this major story as a fantasy epic rather than a superhero story, and tried to world-build the culture of Atlantis. The court intrigue and politics suit that kind of setting, and so I have genuine historical events. I think fantasy and Science fiction are often strengthened by an authenticity that comes from treating them as if they are an account of some actual, troubled period of history. To me, Atlantis is just a part of the ancient world we didn’t know existed. With added magic. [laughs] 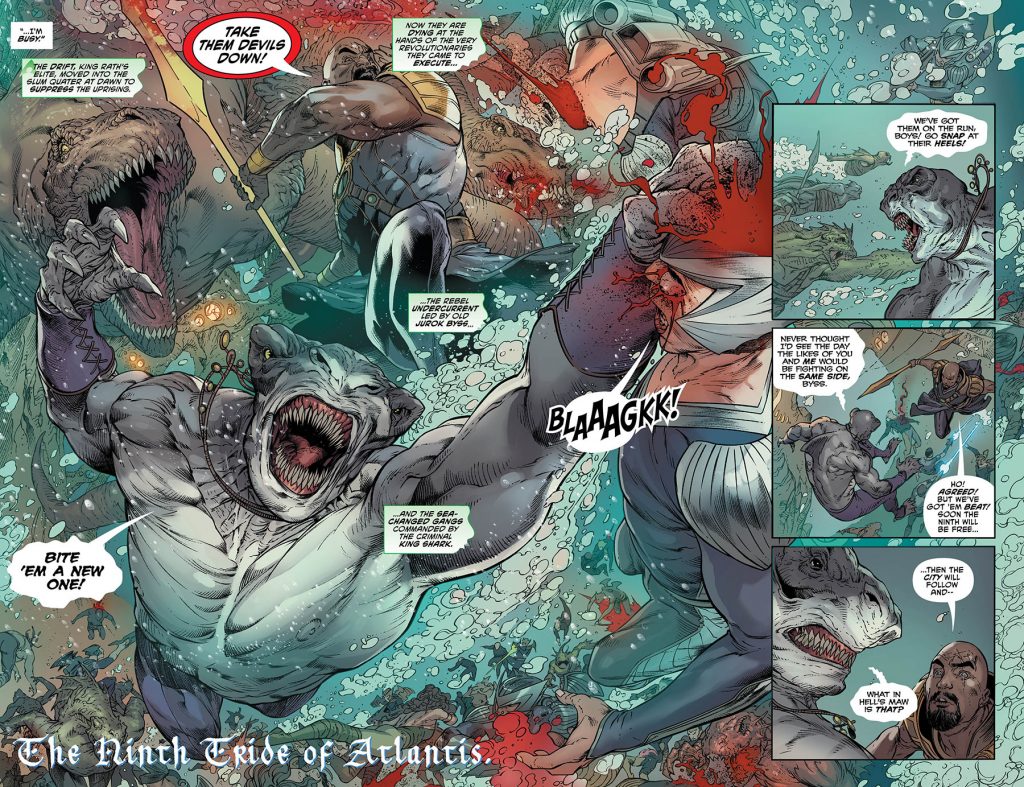 FS: This book is set during the aftermath of Dark Nights: Metal? How have the events of that story affected Atlantis and how its people view their world and the surface one?

FS: Before Rath shows the results of the bargain he’s made, we see the elders cast a secret ballot of no confidence against Rath. Are there any parallels you had in mind when writing the story to any government, either in fiction or in history?

DA: The history of, say, Ancient Greece or Rome are littered with examples of this…and I think there’s something fascinating about the idea of a troubled parliament trying to deprive a dangerous leader of political power. The consequences are seldom fun…. and, as you say, Rath is more than just a bad leader.

FS: Without giving too much away, Rath becomes a more looming threat at the end of the issue. What were the discussions with artist Robson Rocha like in achieving the look and feel of that last scene?

DA: The designs evolved through several artists, especially Kelley Jones, who did a fantastic guest issue. Robson – who is amazing – just ran with those ideas and created the imagery here. 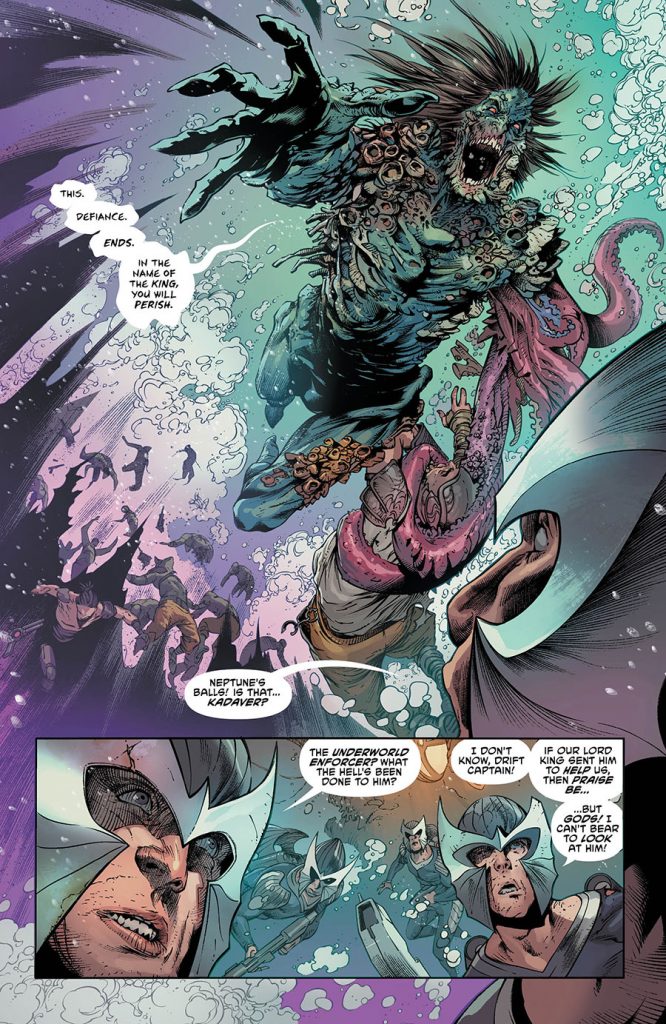 FS: Is there anything you can tease about what we can expect to see next issue?

DA: We’re approaching the climax of the story. It’s not going to be easy. Alliances are going to be made – and broken, and scale of Rath’s threat is underestimated. Aquaman is one of the world’s great heroes, but when he tries his absolute best… and fails… what then?

From the official issue description of issue #35:

“KINGSLAYER” part one! After King Rath discovers that Arthur is still alive, he sends Aquaman’s former ally Murk to finish the job—or else be executed as a traitor! Meanwhile, Rath’s new power has a terrifying cost…one that will change Atlantis forever! Plus, the events of DARK NIGHTS: METAL begin to take effect on the sunken city…

“THE KINGSLAYER” part two! Aquaman and the resistance hatch a new plan to assassinate King Rath and end the Atlantean Civil War! But even with a double agent strategically placed inside Rath’s inner circle, the resistance may not stand a chance, as Rath’s new magical abilities make him more lethal—and unstable—than ever before!