Welcome to the inaugural entry in DISC-ussion, the monthly-ish series where I take a look at some recent-ish home video releases and complain about color levels.

This time out, Cartoon Network’s Adult Swim gets the fifth season of The Venture Bros. on the shelves (along with the possibily-maybe cancelled Beware the Batman), 80’s horror from the fine folks at Scream Factory, Abel Ferrara’s grindhouse art film (yeah, parse that) Ms. 45, and, you know, other stuff.

It feels like I’ve been hearing about director Joe Lynch’s LARPing horror comedy for years (in my head, it’s right there with All the Boys Love Mandy Lane in terms of long unreleased, but much-talked about geek horror properties). The film follows recently-dumped metalhead Joe (True Blood’s Ryan Kwanten rocking the non-regional dialect), whose drafted into a weekend of live-action role-playing, only to battle a demon from hell with his ex’s face.

The script by Kevin Dreyfuss and Matt Wall largely gets its mileage from messy domestic and modern concerns intruding on the medieval play (in between all of the carnage), but the broad humor is saved by playful performances by Kwanten, Summer Glau, Steve Zahn, Michael Gladis, Jimmie Simpson, and the film’s MVP, Peter Dinklage as a mushroom-chomping warrior.

Given that it’s a recent film, picture quality isn’t much of a concern – this won’t be a reference disc or anything. The disc includes the cast panel from San Diego Comic-Con, cast interviews, behind-the-scenes featurettes, and a squirm-inducing “Hottie Montage” featuring Glau.

Beware the Batman: Season One, Part One

I missed this during its initial run on Cartoon Network last year and, judging by its nebulous status, I wasn’t the only one. To miss it, that is.

Which is a shame: Beware the Batman is a very accessible reinvention of the character, serving as a kind of sleek “Year Two” with superheroine-in-training Katana in tow. Maybe it was the CG that put some viewers off or perhaps it was the initial marketing featuring a gun-toting Alfred (reimagined here as an ex MI:6 tough), but for whatever reason, it appears the show didn’t find an audience. Which is a shame, as it fills an underserved niche somewhere between the psychological drama of The Animated Series and the bouncy, sheer joy of The Brave and the Bold.

The barebones, single-disc release collects the first 13 episodes. Whether or not there will be a second half to the season remains to be seen.

Night of the Demons

Let’s get this out of the way: Witchboard is a very, very bad movie and Night of the Demons is – while fondly remembered – is its own weird challenge to sit through. But both discs have been lovingly produced by Scream Factory (I don’t think they’re capable of cranking out anything less than a fully packed Blu-ray), so for those curious about these two films, you could do worse than to pick them up.

Actually, I kind of take that back: Demons has enough practical gore effects and deliberate weirdness in its teen-party-in-a-mortuary-goes-awry premise (and I’ll confess that Linnea Quigley is probably one of the formative figures in my sexual development), but Witchboard is, from top to bottom, an awful movie from director Kevin Tenney, who made a career of making little-seen ‘D’ horror movies.

Maybe I’m being a bit too harsh. Witchboard is blessed with a couple of inventive shots (the fly-through the house and around the ouija board midway into the movie is interesting, as well as Todd Allen’s fall in the film’s climax).

In the case of both discs, Scream Factory was able to assemble pretty much everyone key to getting each film made to come back and talk about their experiences, along with new commentaries for both movies (along with the previously-recorded tracks from their earlier DVD releases), where the cast and crew speak with an almost infectious level of affection for working alongside Tenney and with each other.

Hell, go ahead and pick up Night of the Demons, and if you have a couple of bucks left over pick up Witchboard. They’re weird. You might like ‘em.

Werewolf: The Beast Among Us

Please, someone save Stephen Rea from whatever cruel gypsy curse has him showing up in garbage like The Beast Among Us.

A reboot’s been in the cards for a while for the long-running Child’s Play series, but when one failed to materialize, franchise creator Don Mancini went ahead and made another one, serving as kind of a soft platform to bring demonic doll Chucky back for more victims.

Two straight movies of Chucky as a quipping serial killer can’t be erased, and Curse lacks the nerve-shredding creepiness of the original, but played as a single-location, Gothic thriller, it finds some mileage in its killer, and Fiona Dourif (yup, daughter of Chucky actor Brad), makes a sympathetic lead as the bodies start to pile up.

Universal’s disc includes a retrospective on the franchise, an effects doc, storyboards, deleted scenes, a gag reel, a making-of, and commentary. 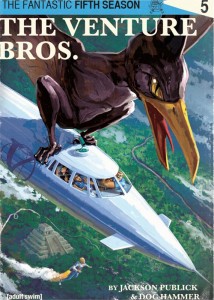 The Venture Bros.: The Fifth Season

I wonder what the average fan thinks of the last two seasons of The Venture Bros., blowing up, as it does, the core family dynamic with Brock off at Sphinx, Gary flirting with the idea of being a hero, and Sgt. Hatred serving as a creepy uncle figure to the boys who are, in turn, actually being forced to grow up now that all of their clones are gross pink paste helping the lawn grow.

This season feels a little more melancholy than past ones – maybe it’s Dean’s new emo phase, or how Doc Venture’s latest get-rich scheme (“What Color is Your Cleansuit”) comes off as even more desperate, or how no one seems to be especially happy with where the chips fell in the aftermath of season three. The shift has made the show less laugh-out-loud funny and infinitely more human.

But what do I know? I’m still in the tank for this show.

The eight-episode season contains commentary from the show’s creators along with the pair of specials bridging the fourth and fifth season (“From the Ladle to the Grave” and the Halloween special). The disc also includes a handful of deleted scenes.

Disc of the Month 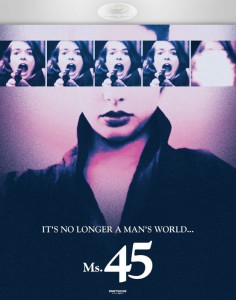 “Holy shit, this” could serve as my review. Longer: King of New York director Ferrara makes this sleazy, dangerous, and downright unnerving revenge thriller that I wish I’d heard of before now.

Occasional Ferrara collaborator (and multi-hyphenate creative) Zoe Tamerlis Lund plays deaf-mute seamstress Thana, who’s driven mad by two separate, brutal sexual assaults in the same day. Snagging the title pistol from one of her assailants, Thana starts off stalking the grimy streets of New York and putting bullets in would-be rapists, before becoming less and less discerning about her targets.

Ferrara and Lund have it both ways, delivering the requisite sleaze while somehow avoiding putting much of any skin on display. It’s seedy but not exploitative, if that makes any sense.

Drafthouse Films’ disc is as much a celebration of the late Lund (who succumbed to complications related to heroin addiction) as it is the film, with a lengthy look back at the movie with Ferrara (who talks with both affection and exasperation for the young woman who once stole a print of Ms. 45 and hijacked a bus in order to get final cut), a pair of 6-minute shorts featuring Lund’s mother and ex-husband talking about the messiness of living with a possibly unbalanced genius, and a booklet of essays written by Lund herself.