In honor of 4/20 gifs this week are hella late, bro. Oh, it’s not 4/20 yet? Alright, my bad. But just like your girlfriend’s monthly visitor, better late than never…

So this episode was penned by our Lord and Savior George “Two Rs” Martin. We usually have to wait til near the end of the season for his episode, so just seeing his credit at the beginning one would think it’s going to be kind of important. But nothing really happened — except holy shit #PURPLEWEDDING! Which is a pretty good and mostly spoiler free hashtag, I tried to get #JOFFREYCHOKESTODEATHONOVERCONFIDENCE trending but it didn’t really catch on.

Before we get to that, let’s check in with some the ancillary characters hanging around Westeros.

First up is everyone’s favorite torturous psychopath, Ramsay Snow aka the really-hot-but-shy-guy from Misfits; the ladies sure do love those mystery wrapped in an enigma wrapped in rock hard abs types. Okay, wipe yourself off and lets get back to Ramsay hunting the most dangerous game with some weird girl that he would have had a crush on if he was a normal person and not a disgusting lunatic.

Oooh I hope she’s watching my dogs eat this girl’s face off.

Back at King’s Landing, Jamie and Tyrion pour one out for all the dead Lannisters.

Their conversation leads to Tyrion helping Jamie with his ‘I really suck at fighting now’ problem by setting him up with ‘discrete swordsman’ Bronn as a trainer. (Note: In the books Jamie is trained by Ser Ilyn Payne, an ideal candidate because he has no tongue and can’t tell anyone. However, IRL the actor who played Payne, Dr. Feelgood frontman Wilko Johnson, contracted terminal cancer and had to leave the show. He’s currently doing OK and rocking with Roger Daltrey from The Who.) This is why HBO has found a good reason to keep people’s champ, Bronn on screen as much as they can.

Bronn is duly impressed (with the gold he’s being paid with).

And not Jamie’s left hand fighting skills, which look like this.

We head back North for a second to catch up with the Roose “Is Loose” Bolton who is just returning to the Dreadfort and making sure that we continue the daddy issues themes from the premiere.

Roose is kind of mad when he finds out what condition his bastard has left Theon ‘Reek’ Greyjoy in. But he calms down after Ramsay lets him know that Bran and Rickon Stark are still alive and most likely headed to see their own bastard brother, Jon, at The Wall. Also, because he’s a Bolton, he gets some sick pride in seeing just how broken and pathetic Theon has become under the care of Ramsay.

And then Theon cuts him from ear to ear. Just kidding he’s still such a huge fucking coward.

Real quick, before we get to the Purple Wedding. Stannis is doing nothing on Dragonstone, except ‘cleansing the sins of the world’ from his brother in law. That is to say, burning him alive.

Bran, Rickon, Hodor, and Meera & Jojen Reed are still trucking along up North. Can’t really discuss too much of this story without getting into spoilers but this happens when Bran touches a weirwood tree.

Instead of getting bogged down in details, let’s just say that what’s happening here is one of the many reasons why A Song Of Ice And Fire & Game of Thrones is so awesome and also why Martin is a literary pimp. Even in the books we still only have a loose understanding of what’s happening here and god dammit George needs to stop writing television scripts and finish these books because I am dying.

Alright on to Joffrey’s wedding, or more accurately, his wedding feast. First this happens:

Pod thinking about showing her his “Sword of The Morning.”

Then there’s some music but Joffrey gets bored, shocking I know.

In the immortal words of Marcus from ATL/Big Boi from Outkast:

The wedding feast entertainment continues for awhile, actually like half of the episode, but we already know how it basically goes down. Joffrey enjoys laughing at a dwarf fight; everyone else is kind of upset by it all.

Then he tells his uncle, Tyrion, that he should join the melee. Tyrion does what Tyrion does and makes a verbose speech that would have embarrassed Joffrey even more if he was able to understand half the words. Joffrey in turn, dumps his goblet of wine over his uncle’s head.

“Haha this is such a good idea, I definitely won’t regret doing this.”

Then he tells Tyrion to be his cup bearer for the remainder of the feast.

“I really can’t think of one reason why I shouldn’t be doing this.”

Tyrion fills the cup, but refuses to kneel so Joffrey doesn’t actually take the goblet from him as he’s interrupted by a big ass pie with doves in it.

So he eats some (humble) pie. See what I did there? And also takes a sip of wine. Then, well, we’ve all watched it several dozen times at this point. Joffrey starts choking:

I think everyone is deeply relieved that Joffrey is dead and that we mostly only have to worry about Ramsay Snow eating sausages and a giving us nightmares now.  I did really enjoy Jack Gleeson’s King Joff and he’ll be missed as the series continues, but at least he has a good sense of humor about the whole thing. 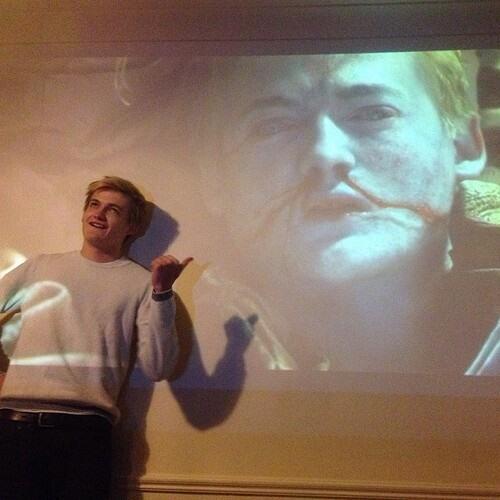 The episode ends with Joffrey’s death and the arrest of Tyrion because, duh, but also Joffrey points at him when he dies, so that looks kind of bad. The whole wedding feast is sort of set up as a whodunit mystery, but even if you haven’t read the books, it’s pretty easy to figure out how Joffrey is poisoned and by whom, at least partly.

If you need or want some help, here’s a hint/massive spoiler:

Okay, thanks for being patient with this recap. Come back on Monday (I promise) for episode 403 gifs, better jokes, and probably a shit load of boobs because unless you count Cersei’s cleavage (AND WE DO NOT) this was a boob free episode. In fact there was more boob in the premiere of Mad Men (cheers AMC) than there was in this episode and there is no way that HBO is going to be out-boobed two weeks in a row.