If you grew playing with action figures, you may have been one of those kids who liked to mix up your toy lines for an opportunity for your favorite heroes and villains to finally meet. Characters who would never meet otherwise could fight alongside one another or have large and dramatic conflict, whatever the case may be. Optimus Prime had the chance to charge into battle with the Silverhawks, Barbie and the Thundercat Cheetara could exchange martial arts tips—the sky was the limit, only kept in check by the breadth and depth of your imagination.

This is most likely why comic book fans gravitate to crossover events to such a degree. As with action figure shenanigans, it’s intriguing and exciting to see how comic book adventurers we’ve known for years will interact with those they’ve never and could never know otherwise. All of this is to say, thank the gods of Earth and Eternia for Injustice vs. the Masters of the Universe #1, out this week from DC Comics, a miniseries that promises to pair all of that wish fulfillment with a story that’s on point and is already showing its potential to be a fun and kickass romp. 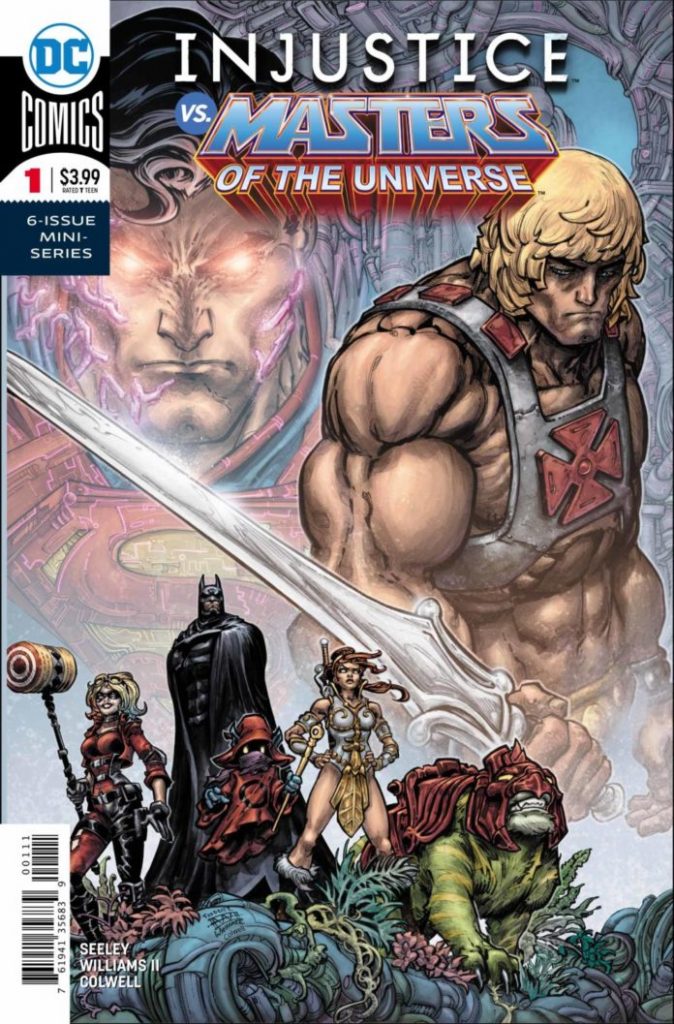 Brought to us by the creative dynamos that are writer Tim Seeley, artist Freddie Williams II, colorist Jeremy Colwell, and letterer Wes Abbott, Injustice vs. Masters of the Universe #1 gives readers no time to pause, dropping us right in on the action with Eternia in crisis. The planet’s champion—the mighty He-Man—and his comrades are ridding the royal palace of the forces of Faker, who had usurped He-Man’s identity and ruled Eternia with an iron fist in He-Man’s absence. While Faker was quickly dispatched, some of the kingdom’s citizens were less-than-thrilled with He-Man’s return, claiming fewer incidents of violence and attack from villainy occurred due to Faker’s authoritarian regime. He-Man, while dispirited, rejects that idea strength should be used in such a manner.

That sentiment assures a group of superheroes from Earth, observing the events from afar, that He-Man and his friends could be the help they so desperately need. Batman, Green Arrow, Cyborg, and a team from the Injustice universe—an alternate Earth in which Superman rules as a dictator—have traveled to Eternia to enlist He-Man’s aid. Eternia’s champion, who derives his power from magic, could be the hope Batman and company need to put a stop to the reign of Superman, who is vulnerable to magical attacks. However, what neither Batman nor He-Man know is that Superman has his own help from Eternia—He-Man’s arch-nemesis Skeletor—who is feeding the Man of Steel information that could help the Kryptonian tighten his grip on his world. And what no one knows is the looming threat that threatens to obliterate both worlds. 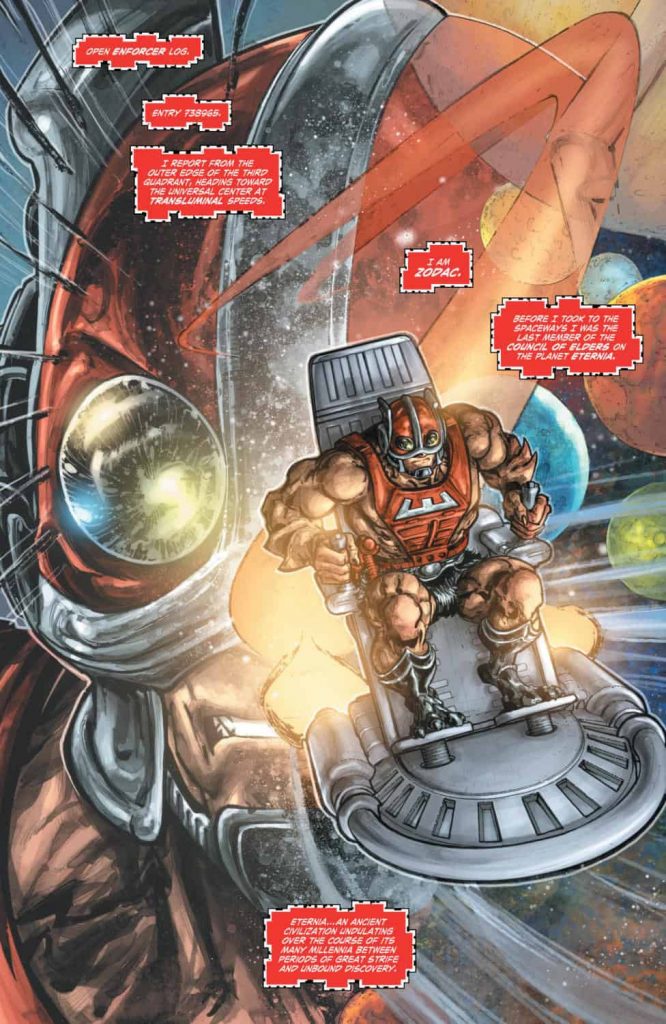 Seeley is no stranger to either He-Man or the DC Universe, having worked on both The Art of He-Man for Dark Horse Comics and such books as Batman: Eternal and Grayson for DC. As such, he is more than adept at knowing how to capture the voice of everyone from the brawny Eternian to the Dark Knight Detective with ease. With a book as packed with so many characters with larger-than-life personalities as this one, not one hero or villain feels short-changed, with them all getting at least one piece of dialogue that is a tail-kicking moment and perfectly encapsulates their personalities. Even if you had never heard of Teela before, Seeley’s words lets you know that she’s a no-nonsense warrior; likewise, through her wack-a-doo spouting off at the mouth, readers get the idea that Harley Quinn is a hero with a layer of cray mixed in for good measure.

But one thing that was unexpected, admittedly—but was a welcome surprise—is the commentary from Seeley by way of He-Man and the Eternians on autocracy. Some of that was known to come into play; we’re talking about heroes joining forces to take on a dictatorial Superman, after all. However, using some of the Eternians as proxies, Seeley speaks to why some people gravitate toward autocratic strongmen. Sometimes, people are willing (or think they are) to give up freedom for security, which is why a few rabble-rousing Eternians voiced their pleasure for Faker’s reign. While Seeley may not necessarily be using Injustice vs. Masters of the Universe #1 to nod to today’s current global climate, the story is timely nonetheless. 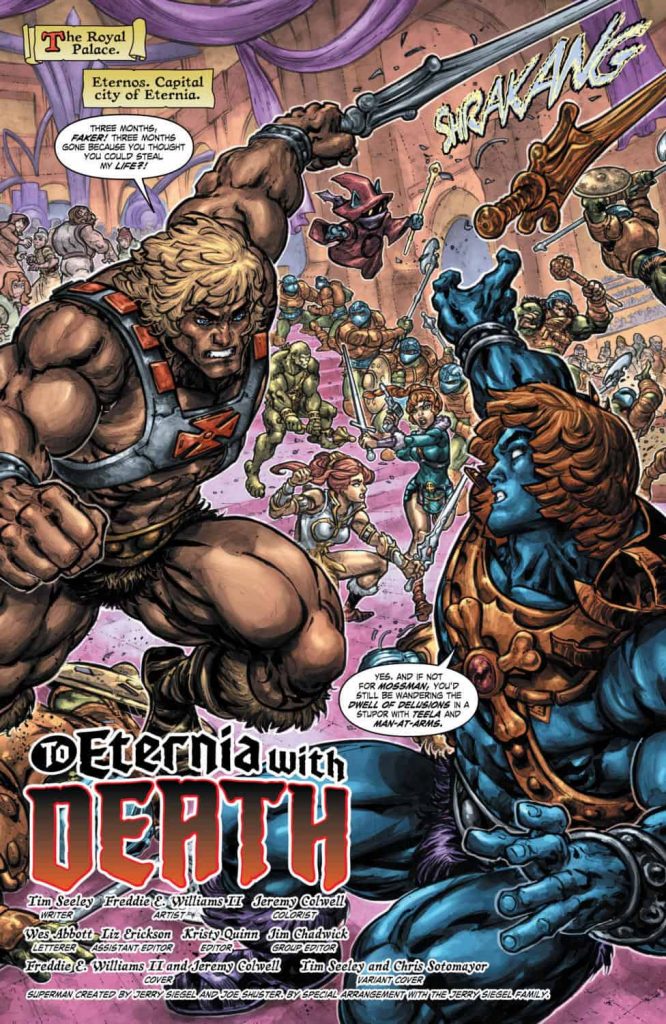 That high-minded thematic overlay, however, is coupled with explosive energy thanks to the linework of Williams II, who renders the characters and the action in the god-like manner both deserve. He-Man’s muscles ripple and pop off the page, looking like they could halt a freight train—or a Beast Man—dead in its tracks. Every character looks how they should: powerful, dynamic, and like the Platonic form of those heroes and villains. That last bit sounds strange, admittedly, but when you’re doing a crossover between two universes such as this, it’s of paramount importance that the characters look and feel iconic. Many readers have waited for years to see such an event, and Williams II does not disappoint. Colwell’s colors are, as always, a joy, as he brings his A-game to every vista, to the weathered, medieval look of Eternia to the sci-fi darkness of Superman’s lair. Abbott ensures that every piece of dialogue feels booming and operatic, particularly when He-Man bellows his most famous catch-phrase.

Injustice vs. Masters of the Universe #1 gives readers everything they could ask for in a meeting of DC’s heroes and villains and He-Man’s companions and foes, as well some beats they didn’t. It’s not every creative team that can bring thoughtful political commentary to a yarn about magic swords and alternate realities, but they stick the landing beautifully.

Injustice vs. the Masters of the Universe #1 is on sale now from DC Comics.

How natural was it that Moss Man would be connected to the same Green as Swamp Thing? Never occurred to me to do that, but that was a stroke of genius.

As many miniseries as the Injustice universe spans, Seeley does a phenomenal job at succinctly explaining it all—and in just one page!

Readers have never seen such a powerful Battle Cat on screen or page. More of this please, Mr. Williams II!

Believing He-man and the Masters of the Universe defeated, a robotic impostor has seized control of Eternia—but not for long! After freeing his kingdom from this strongman’s rule, Prince Adam learns not everyone is pleased to see the pretender deposed—but Adam knows the value of freedom. So when heroes from another dimension ask his aid in deposing a super-hero turned dictator, he agrees. Teaming up with Batman against the Superman of the Injustice Universe, He-man and his new allies face dangerous and familiar enemies in a battle where no world is safe!

Action & Questions on Autocracy in INJUSTICE VS. MASTERS OF THE UNIVERSE #1
Injustice vs. Masters of the Universe #1 gives readers everything they could ask for in a meeting of DC’s heroes and villains and He-Man’s companions and foes, as well some beats they didn’t. It’s not every creative team that can bring thoughtful political commentary to a yarn about magic swords and alternate realities, but they stick the landing beautifully.
9Overall Score
Reader Rating: (0 Votes)
0.0