Lara Croft has always been a character motivated by an almost compulsive desire for exploration and blood-rushing adventure. However, in Tomb Raider: Survivor’s Crusade #1, on this Wednesday from Dark Horse Comics, Lara finds another emotional stressor pushing her and her actions; that of revenge. Following her father’s death at the hands of Trinity, Lara is distancing herself from outside life with the single-minded goal of stopping Trinity from harming anyone else.

I recently spoke with Survivor’s Crusade writers Jackson Lanzing and Collin Kelly and artist Ashley A. Woods about where we find Lara at the beginning of the series, her state of mind, and the enduring nature of the Tomb Raider mythos. 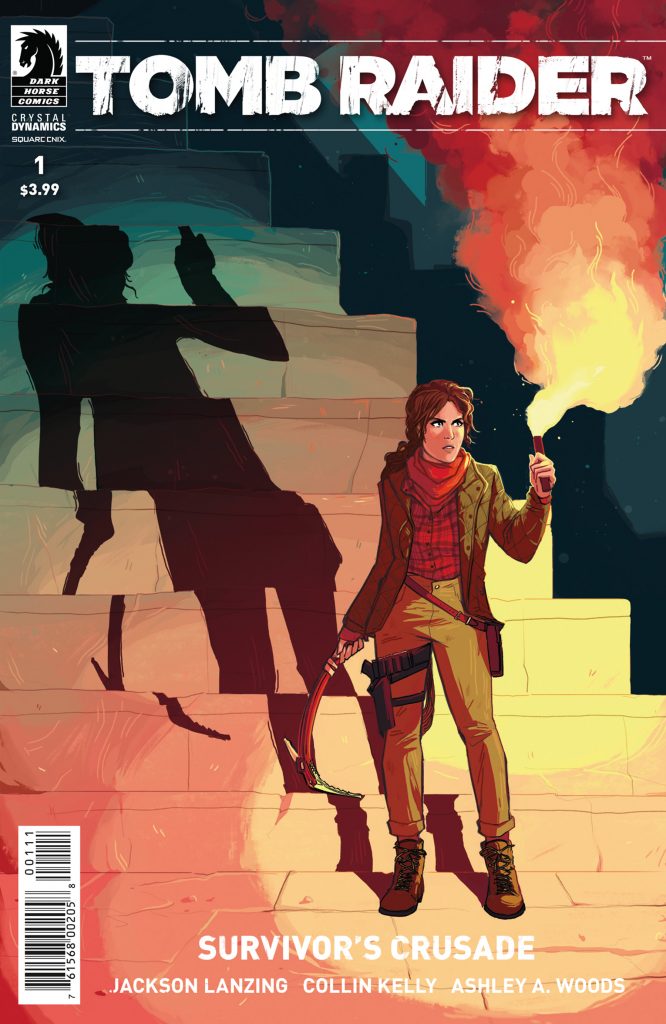 FreakSugar: For folks who are considering picking up the book, what is the conceit of Tomb Raider: Survivor’s Crusade?

Collin Kelly: Survivor’s Crusade picks up in the aftermath of Rise of the Tomb Raider, while Lara is still grappling with the revelation that her father’s death was no accident. Knowing that he was murdered by Trinity, Lara – for the first time – finds herself driven not by a need for exploration, but by a far more base human impulse: revenge. That path will lead her from the cliffside villas of Cinque Terre to the depths of Thailand, spanning the globe on an adventure that will explore not only antiquity, but her own past. Along the way, she’ll begin to uncover the next phase of Trinity’s plans, as well as start to hear whispers of a new power in their organization, a threat to everything Lara – and her father – have ever loved.

Ashley A. Woods: Gamers who have played the revamped series of Tomb Raider really appreciate the focus on Lara’s persona and how her mind is explored. This key element is carried over into the pages of Survivor’s Crusade, where readers will have a further understanding of her motives and watch her balance her humane and savage traits.

FS: Quite a bit of uncertainty and turmoil has surrounded Lara prior to the start of Survivor’s Crusade. Where do we find her emotionally at the beginning of the issue?

Jackson Lanzing: That question is precisely the question we hope you’ll be asking as you enter the story. Not to be cagey, but the question of Lara’s emotional state following the trauma in Siberia is a huge part of what drew us to the character – so we hope fans will be as eager as we were to discover where her head is at and who she is becoming in the aftermath.

AAW: At the beginning, she is focused and determined… maybe even obsessed as she tracks down Trinity. She is pretty reckless. 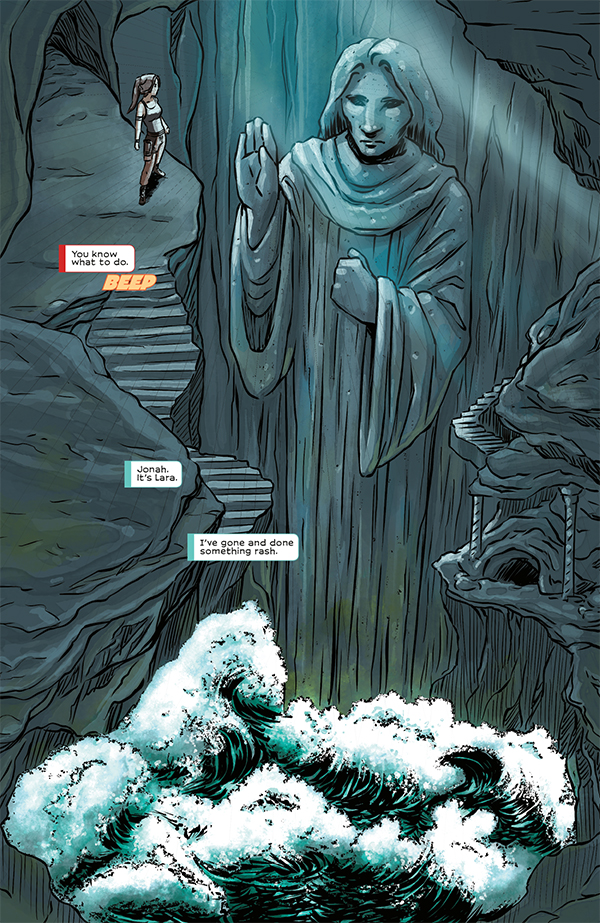 FS: Following up on that, we see Lara attempting to track down her father’s murderer, which puts her on a collision path with Trinity. How does her emotional state affect her actions in the miniseries?

CK: Her emotions are everything. Lara is driven by raw willpower and determination, a stubborn streak that gives her a well of strength to draw on when lives are on the line. Now however, that passion is being fueled by darker impulses, and her inability to square what her heart knows to be right, but her gut tells her is wrong, will create the fundamental tension at the core of our story.

AAW: Not only is she reckless but also a bit manipulative. Although she does care for her friends very much, she’s not considerate of how her actions may affect them. It seems as though her sole concern is finding Trinity. In other parts of the story, she embraces her savage nature but she actually has no joy in killing. She is doing what she feels she must do to obtain the truth she seeks.

FS: Not so much a question, just a bit of praise: Much of Lara’s inner monologue is depicted through her recording and re-recording of a voicemail to Jonah, which was such a smart choice. I forgot how much I’ve missed thought balloons in comics.

JL: Thank you! Collin and I are both fascinated with the ways that captions can be used to provide context in comics – the way an internal monologue is different from a narrated story or a diary entry or, in our case, a voicemail. It’s not just a peak into Lara’s mind – is also a peak into her relationships and the way she understands her friendships. That said, to give you a little peak into the process, we actually wrote the first issue almost entirely silent at first – the voicemails came in the final lettering pass. It was a late bit of inspiration that came from having written issue #2, which deals much more directly with Lara’s relationship with Jonah. 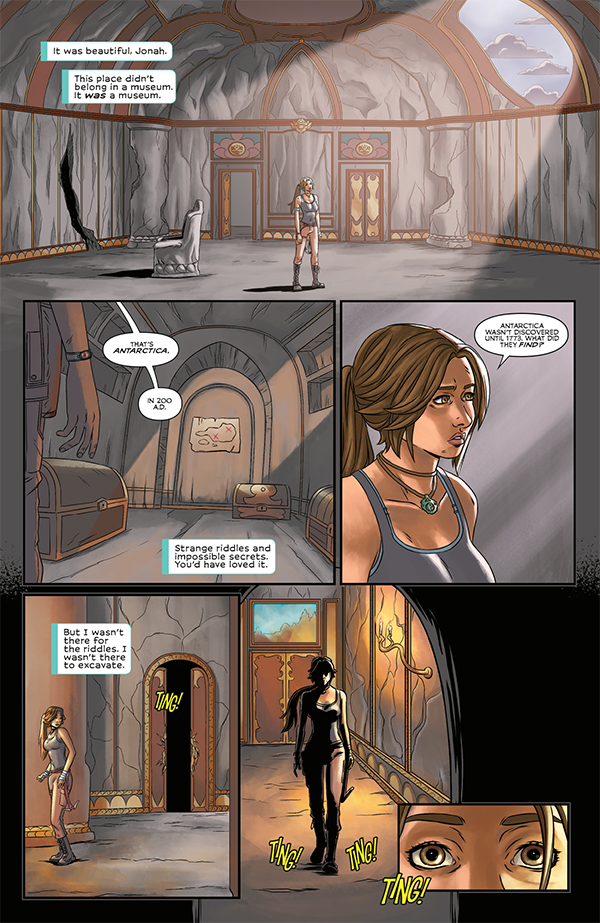 FS: Speaking of Jonah, how would you describe her relationship with Jonah at the beginning of the miniseries? Where do they stand?

JL: I direct you to issue #2, which answers this question much more fully than I ever could in an interview. Suffice it to say, before Lara headed to Italy, she was somewhere else with Jonah – and the aftermath of that adventure is a big piece of the puzzle in their relationship. But it’s important to note that if anyone works to understand Lara, to meet her halfway, to keep up with her, it’s Jonah. Putting that relationship to the test is a huge part of our story – and Ashley’s renderings of those two in crisis are gonna break your heart.

FS: I’m an anthropology nerd so I’m always fascinated with any representation of its related sub-disciplines in pop culture. What kind of research preparation goes into a book like Survivor’s Crusade?

CK: Great question! We’re research hounds, so a fun byproduct to a project like this is the chance to really dive into some of the more obscure corners of the atlas obscura and discover which secret corner of the world we want to uncover. Jackson and I started the process by brainstorming types of locals, thinking about the kind of places we would love to see Lara visit. Our first location, Cinque Terre, was easy; I had backpacked through the Italian Rivera when I was in school, and the way these seaside villages clung to the cliff face always stuck with me. Starting Lara’s adventure in a place that was so bright and seemingly safe was created a perfect backdrop for Lara’s inner turmoil. Later on in the story, Jack got to flex his deep seated love for Egyptology, deploying a wealth of information that he’d been storing up for years in order to create a secret place that seems so real, I wouldn’t be surprised if it was discovered tomorrow. Basically, our mission statement was to deliver on the thrill of tomb raiding, and with Ashley’s beautiful ability to bring these settings to life, we’re thrilled by the result.

AAW: Quite a bit of research has gone into this miniseries. The locations for each script are detailed clearly which helps take some of the pressure off of me as the artist. Based on what I read within the scripts, I then go and search for more references for temples, towns, etc. so I can better understand what I am drawing. It’s a lot of fun. 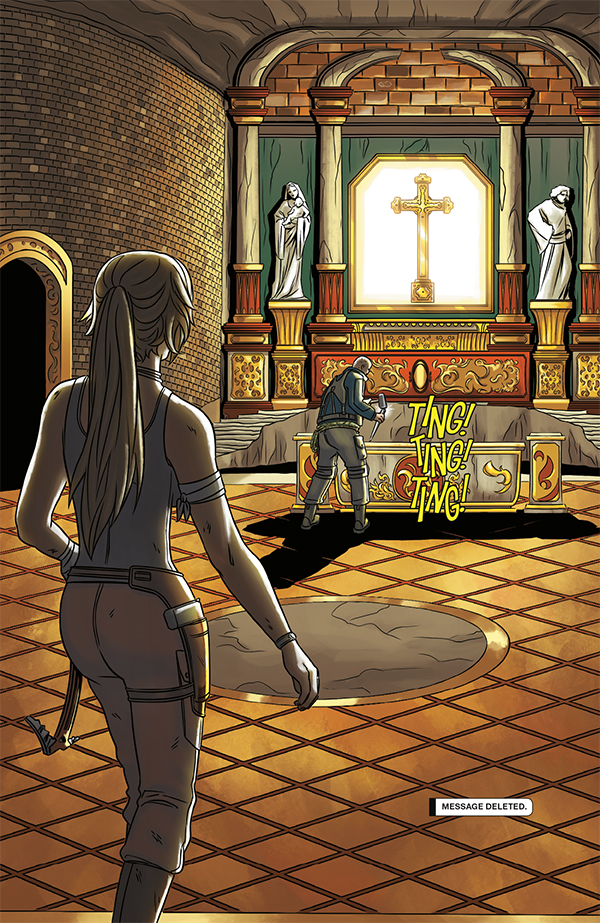 FS: The book is so kinetic, while still letting readers sweep their eyes across multiple locales and wide vistas. What was the collaboration process like in deciding how you wanted the book to look like?

JL: When we first sat down with our editor, Cardner Clark, to talk potential artists for Survivor’s Crusade, Ashley A Woods’ name was at the top of our list. We’ve been enormous fans since Niobe: She Is Life – and the chance to work with someone so equally excellent at emotion, location, and brutal action was, simply put, a treat. Once we knew we were in safe hands, we let our minds go wild and tried to focus on locales that we’d either always wanted to write – or that we knew well enough to bring some honesty to the proceedings. Those initial brainstorms were fun as hell, because it was literally us standing over a map, drawing lines from place to place like the travel sequences in Raiders of the Lost Ark. We felt like adventurers, and there’s no better place to be mentally when writing Lara Croft.

AAW: Dark Horse and Crystal Dynamics have been pretty easy going, giving me freedom with my panel layouts, pencils and inks. Their main concern is that Lara looks like Lara, so I try to be mindful of that.

FS: Lara is very much a character that’s burrowed into our collective pop culture consciousness over the past couple decades through her appearances in games, movies, and comics and many of us have an idea in our minds of who she is and her motivations. How do you respect that idea while still keeping the character fresh?

CK: A character like Lara Croft carries with her a legacy, that’s true. For us, it wasn’t so much about addressing all the Laras she’s been, and rather just lensing in on the Lara she is now. The latest run of games and the comics that weave them together, that’s the Lara we found ourselves working with, which by necessity meant that most of her past – while impossible not to acknowledge – could be put down. For us, for the entire team, our goal was simply to deliver an honest, emotional story about a woman dealing with her trauma set against a thrilling backdrop of adventure; we think there’s nothing fresher than genuine pathos. That being said, Trinity isn’t a group to sit ideally by and be taken apart, so Lara’s survivor’s crusade may soon erupt into something that will push her beyond the limits of her abilities: a survivor’s war.

AAW: As a gamer and fan who’s played and own many of the Tomb Raider games (old and new), I have my own idea of her as well. Her character is very familiar to me so it wasn’t too difficult tapping into the mentality of drawing her. I mainly focused on communicating her expressions and staying faithful to key details in her hair and wardrobe. As for keeping the character fresh, I don’t believe that was a big challenge, either. Lara is timeless.

Lara Croft has unfinished business. After facing Trinity in Siberia, she’s more confused than ever about her father’s mysterious death. She’s been training and following flimsy leads, preparing herself to figure out what really happened to Lord Richard Croft. Now, she’s ready to put everything on the line to uncover the truth.