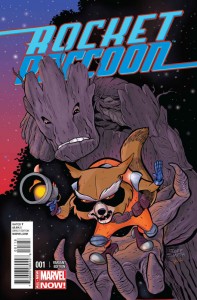 As if you didn’t need another reason to head to the comic event of the year, this stunning cover will only be available for purchase at the Marvel Booth at Comic-Con International: San Diego. Jeff Smith’s Rocket Raccoon #1 variant joins an array of soon to be announced merchandise that will be available exclusively on site at The Marvel Shop in Marvel’s San Diego Comic Con International booth (Booth #2329).

Limited to 5000 pieces and priced at $10.00, don’t miss out on your chance to snag this epic variant cover as comics legend Jeff Smith brings his unique style and charm to two of your favorite Guardians of the Galaxy exclusively at this year’s Marvel Shop for San Diego Comic Con International!