In DC Comics’ We Are Robin, writer Lee Bermejo follows an assemblage of teenagers who have taken on the guises and standards of Batman’s famous Boy Wonder in order to protect Gotham City the only way they know how, bringing their own unique sensibilities and skills to the task of keeping the Dark Knight’s home safe.

Such an undertaking can be arduous, especially for a group of youngsters who don’t have the benefit of a Caped Crusader’s guiding hand and training. At the end of issue 3, the Robins discover the perils of such unpreparedness as they lose one of their own in the War on Crime. In issue 4, in comic shops now, we see the aftermath of that loss, both in social media’s response to the Robins and with Riko, a Girl Wonder in the group, and how she’s dealing with her conflicting feelings following the tragedy.

Mr. Bermejo recently spoke with me about how the death of a Robin is impacting the rest of the others, how social media’s reactionary nature in the real world is mirrored in We Are Robin, and how Lord of the Flies played a role in this issue.

FreakSugar: The beginning of issue 4 touches on the aftermath of 3, in which we see the first real casualty in this war on crime that the Robins have taken upon themselves to wage. How is the loss affecting the rest of the Robins? Does it embolden them more or is it acting as a wake-up call? Or maybe a mix depending on the character?

Lee Bermejo: Yes, it’s definitely a mix, which is something you will see in issue 5 as well. I can’t get into it too much. Here’s the thing: I think that that death is to show that there are stakes to what they’re doing. And one of the things that they’re wrestling with, especially Riko, is “What am I even doing? Am I right? Is Batman right? Am I doing more harm than good?” It’s something that they will have to deal with and we’re seeing it in different ways and will see more about it next issue.

One of the things we wanted to do with this issue is to get to know a character, and this will happen throughout the series. We’re going to have different characters who will have a chance to shine. I think it’s an organic way to do that. With Riko’s special qualities and love she has for Batgirl—and her eccentric personality and having Batgirl as an imaginary friend—I thought this issue was the perfect opportunity to give her a moment with her hero and how she’s impacted by the whole thing. [Editor’s note: Riko actually meets Batgirl in this issue.] 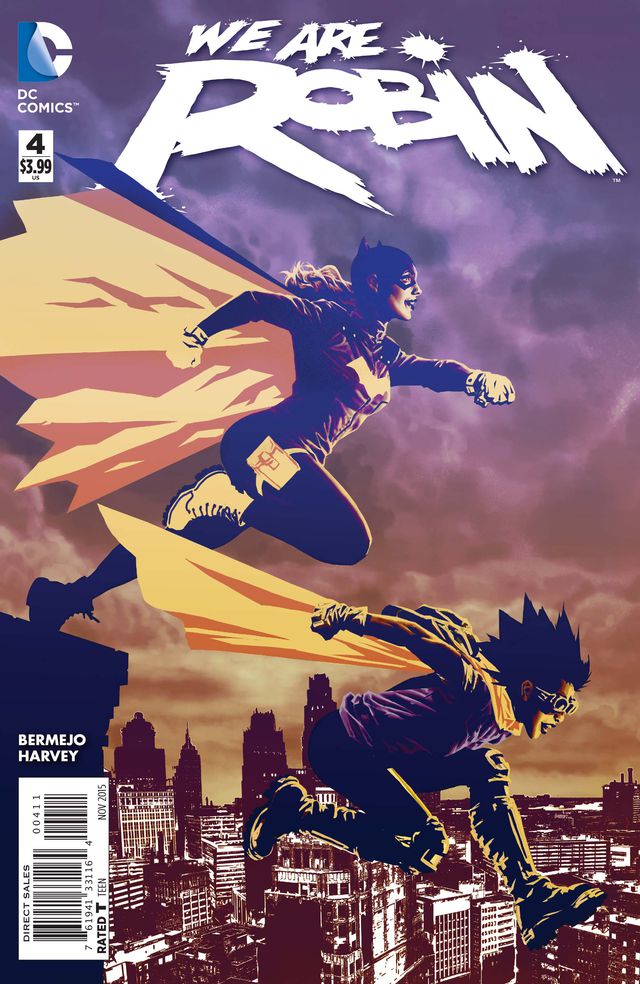 WE ARE ROBIN #4 cover

LB: I don’t know if I can answer that completely. I can tell you what my intention is. One of the big things about this book from the very beginning was to make it told from the perspective of different sorts of people in Gotham to get a feel for a city that is constantly under siege by these outrageous cartoon villain and larger-than-life characters. So, if there’s a building that’s blown up, we need to feel the tremor. We need to see the consequences.

That’s important to show, but since this is a book about teenagers, we’re communicating in a way not just teenagers do, but how everyone is now: through social media. And we’re exploring the reactionary nature of that, not just in comics, but in the world as a whole. People are so quick to react. They don’t think about. That’s the world we’re living in right now. That’s how kids communicate and it’s how we see critical reactions to the Robins’ existence. Are the Robins a gang? Are they part of the problem? Are they a solution? Some people of Gotham might see the Robins as a tradition of ordinary people rising up in defense of their city. So, I feel like it’s interesting for this book not to just have one point of view, not just good guys and bad guys.

FS: That’s one of the things I really appreciated about the book. When we spoke about the first issue, we talked about how connectivity through social media would play a huge role in We Are Robin, but I liked that you touched on the reactionary, darker side of social media, in which users react and often do not give measured responses.

LB: Yeah, isn’t that interesting? When something hits Twitter or something hits the news, something as banal as an actor taking on a role, the response is pure id. It’s amazing to me. The online personality is a strong barbarian. It goes smash with its broadsword in both its praise and its critique. I think that bears paying attention to and commenting on, especially in a book like this. 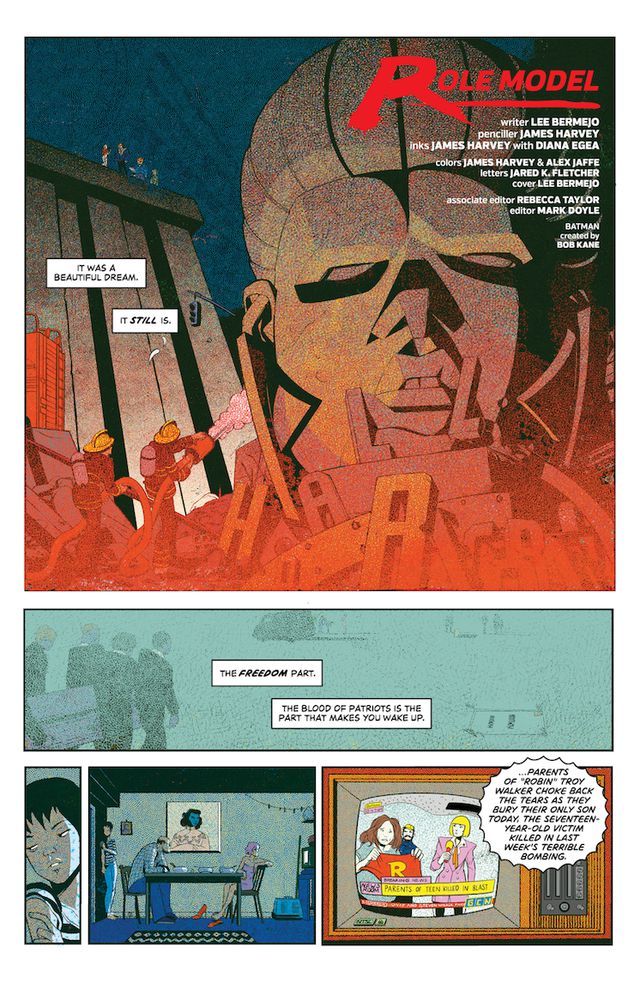 FS: Toward the beginning of the issue, we see Riko reading Lord of the Flies, which deals, in part, with children taking on adult responsibilities in the wild. How do you think Riko is applying what she’s read to that particular tale?

LB: I’m glad that came through. I thought that was risky in that it could be misinterpreted that the kids were waiting for some adult to come save them. That wasn’t the intention at all. The intention, number one, was to press the fact that she’s in high school and she has homework. [laughs] And it happens sometimes in life—it’s happened to me—that you’re reading something and it hits close to home. For some people, it’s Catcher in the Rye. It might be different for others. That was kind of big thematic thing for me, to show that they’re lost.

The public is declaring that they’re doing more harm than good. They really are kind of on their own. It forces them to address what they want and how they want to live and whether they want to give into the animalistic nature of things or if they want to be better. It’s one of those ways to nod to the theme without having to outright say it. 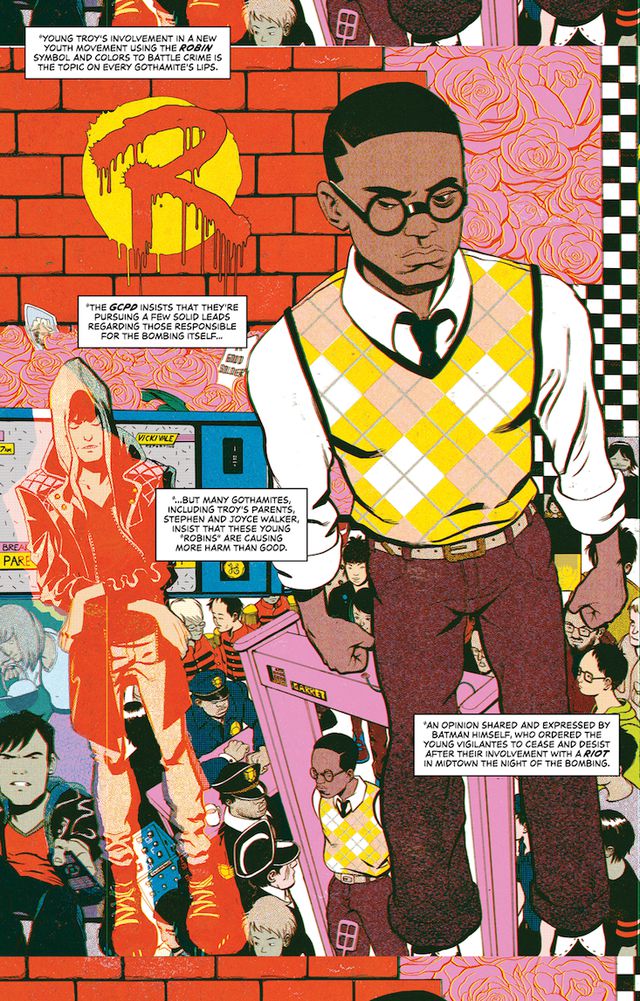 FS: I enjoyed how you used social media to tap into our obsession with celebrity and grasping at even a touch of that celebrity, such as the “Cape Chasers” you showed faking a disaster just to get a glimpse of one of the Robins to snap a picture and take a video. It resonates with what’s going on in the world quite a bit. People stalk celebrities on social media and this seems like the natural extension of things in a superhero world.

LB: Yeah, I just think it’s something that would happen. Superheroes would be celebrities of their world. Instead of staking out a hotel to take a picture of an actor, people would be more creative of how they attract costumed people out in the open. I like exploring this idea of how superheroes aren’t looked at as people, much in the same way that celebrities aren’t looked as people sometimes. People say that that’s part of it, that celebrities just have to accept that part of it is just expecting to get shit on. But I like looking at how the humanity aspect just seems to be removed. 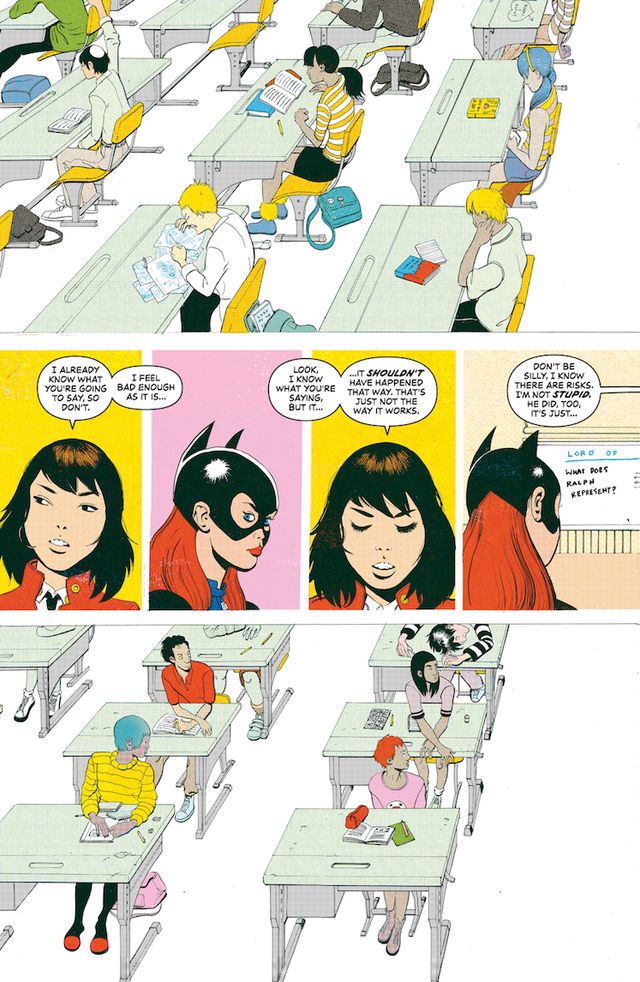 FS: What can you tease about what’s coming in issue 5?

LB: The next issue, you’ll get an idea of who the Big Bad is and who is pulling the strings. You get a glimpse of him in issue 2. Without giving too much away, it becomes a factor in the upcoming “Robin War” story [which will run in the Batman family of comic book titles]. We bring to the fore that these kids have a presence in Gotham City now that can’t be ignored. We bring them outside of the Batman mythology. And with the “Robin War,” it will feature other Robins, so it’s safe to say that you’ll get to see some more well-known Gotham characters.

We Are Robin #4 is in comic shops now!