Viewers were heartened to see Matt Ryan’s portrayal of John Constantine pop up in the CW’s Arrowverse after NBC’s unfortunate cancellation of Constantine, and now it appears that fans of the comic book source material have more reason to rejoice. When Ryan returns to the Arrowverse in this season’s Legends of Tomorrow, Constantine will be firmly a chain-smoking bisexual, just as he was depicted in the DC Comics/Vertigo series Hellblazer. 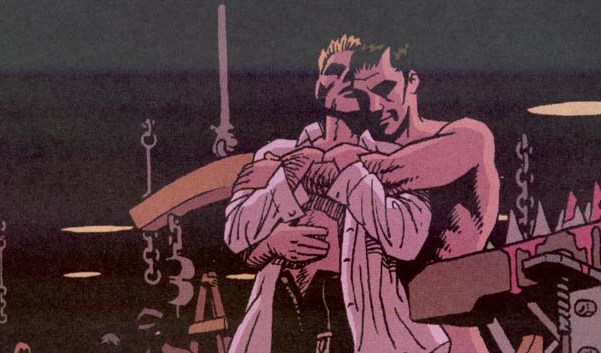 In NBC’s series, Constantine’s bisexuality was given nary a mention, instead preferring to portray the character as heterosexual. Legends executive producer Phil Klemmer told The Hollywood Reporter:

We knew that an alienated, chain-smoking, bisexual, world-weary demonologist would feel right at home among our Legends. His appearance in episode 310 will involve the following: a revisiting of Arrow season four and the events following that season’s finale episode; a confrontation with this season’s Big Bad on Legends — the name we’ve only heard whispered until now, Mallus; some hot sex — something that has been in short supply on the Waverider thus far in season three; and Damien Darhk (Neil McDonough), because how can you do an episode about dark magic and not have Damien Darhk?

In addition to popping up on Legends, Ryan will voice the demon-battling rapscallion in CW Seed’s animated Constantine cartoon, which will premiere in 2018. These pieces of news are big wins for viewers clamoring to see more diverse representation on screen, and it’s also lovely news to hear coming so soon after last month’s Bisexual Day of Visibility. Bisexuality is often under-represented or misrepresented in media, so any step forward is cause to celebrate.

Legends of Tomorrow season three premiered on October 10th on the CW.