For toy collectors and customizers, having your own action figure has most likely been something fantasized about while holding the latest piece of plastic-crack scored at Toys R’ Us. You know what? Forget all of that! If you’ve ever been a child AT ALL you’ve wanted your own action figure. Hell, I think about it all the time! Constantly. In fact, it’s really began to be detrimental to my lifestyle. It’s tough to push my Get-A-Handski-For-$5-Or-A-Can-Of-Beer work behind the convenient store when my brain is ablaze with all synapses firing to the beat of my own toys. Well, Jesse Chagnon of Doomkick.com is currently getting to taste some of that deliciously salty dream thanks to the production release of his Prince Algor (and variants) as part of Zoloworld’s nostalgia-filled Realm of The Underworld line of action figures– and I just happen to have one here for review. 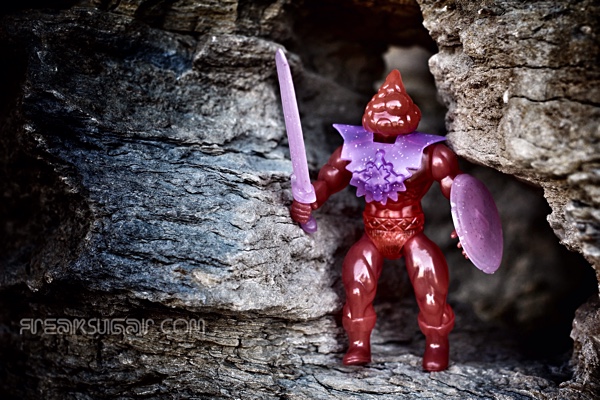 A common foe around the various underground tombs,crypts, and ruins of Jalldoon are the Dungeon Demons. These red imp like creatures breed in large numbers in the dark corners of the world with their purple eyes glowing in the shadows. After a long fight…and it’s always a long fight against hundreds of the beasts…Algor will reenergize himself by absorbing the creatures, and as the millennia old magic of the slimes works it charms Algor’s body turns a bloody shade of red.

Up Close And Slimy

After A Successful Poop

Naturally, the figure I have is the one which is colored by the blood of his enemies. Basically, he’s a gremlin-killing machine, and an all-around cool ass toy. The figure is in scale with the 80’s Remco figures, but also matches up well with Masters of The Universe, with Prince Algor scoring a bit of height and mass advantage over He-Man. Here are a few quick first impressions:

-The head of the figure is very pliable, making it easy to remove from the neck joint and switch out with other Slimes. I like squishy things.

-The plastic used for the body is much higher quality than what I was expecting. None of that fragile bullshit just because it’s translucent like you get on some mass-market toy releases.

-6 points of articulation. Six. That’s my only negative, although considering the style of the line, that’s to be expected.

-The hand grips the sword tightly, and will do the same for MOTU weapons, and even Spy Monkey Creations’ accessories. That definitely goes in the Win column.

-Guess what doesn’t randomly topple over? Prince Algor! The figure stands on his own very well, even with the weapons and armor attached.

Overall this is a fun toy and while it could be reviewed far more in-depth than what I just did, I like fucking around with it far too much to over analyze Dungeon Demon Prince Algor. My advice: Check out the pics, score a throbbing nostalgia-erection, and order a few of the variants when they go on sale this Friday!– and don’t forget the Slimes. Trust me. The desire to have them replace the heads of your other toys will be too great to deny.

Here’s the info on the upcoming sale:

After a successful launch of the full production Prince Algor figure in the Realm of the Underworld Slimed Drones Assortment 2, Rampgeo Industries will be releasing a full wave of figures on the store. The first wave assortment features 5 Variants of Prince Algor, as well as a double pack of two new characters! The sale will be Friday October 30th at 8PM EST
in the Ri Shop.

The numbers on these figures is VERY limited run so supplies will be scarce.