Upon opening up the baggie filled with slime that came with each figure in Zoloworld‘s Realm Of The Underworld Series Slimed Drones, the familiar smell of the non-toxic concoction hit my olfactory senses, immediately plunging me into a state of nostalgic euphoria … errr, it was cool. So much so, that I went on a photo snapping frenzy, awash in the dripping, multi-colored slime, recording history with each closing shutter as Hercules battled his way past a slimed drone bearing his very visage– in a mockery of nature! Or I simply laid on the wet ground and posed toys. Tough to say. Regardless, read on as I take a closer look at the entire Series 2.5 of the Realm Of the Underworld line of fantasy action figures!

The atmosphere within the underworld animates the dead and changes mortals into mindless drones. Outside of this land lies The Stygian Swamps that contain an evil so powerful; it consumes and drives a mind into insanity.
You have the power to determine the fate of each of these warriors!
Will you free them of their mental imprisonment or will you let them fall into darkness?
It is in your hands! 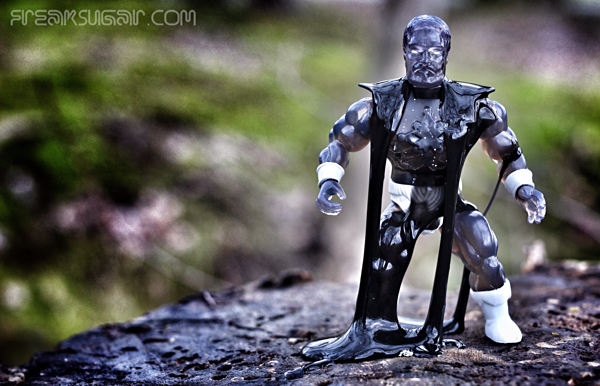 Ulysseus is one of the heroes from the RotU series and has been brought closer to insanity by his exposure to The Stygian Swamps. Or something like that. I’m sorta guessing at this whole thing. All I know for sure is: he looks incredibly cool thanks to his black and white color scheme, and his included slime reminds me of the Venom symbiote. He comes with armor, a sword, slime, and lots of swagger. 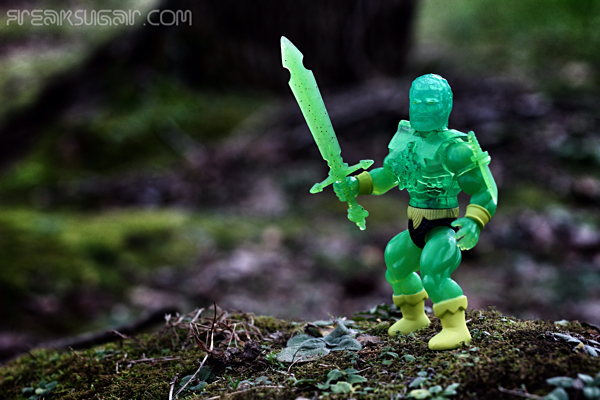 Hercules is the main protagonist of the Realm Of The Underworld action figure line, and this is his slime-version in all of it’s glory! The text from the back of his included trading card reads as follows:

The warriors are trapped! They must fight within their darkest imagination to free themselves. Introducing Toxic Terror Hercules… The First to fall into these swamps and fight for his humanity. Will he be able to break this mental imprisonment or will he fall further into insanity?

The figure comes equipped with armor, a knife and sheath, and a massive broadsword– all molded in matching green. Plus, his snot-like green slime packet adds to him tenfold!– or some other form of measurement. Take your pick. 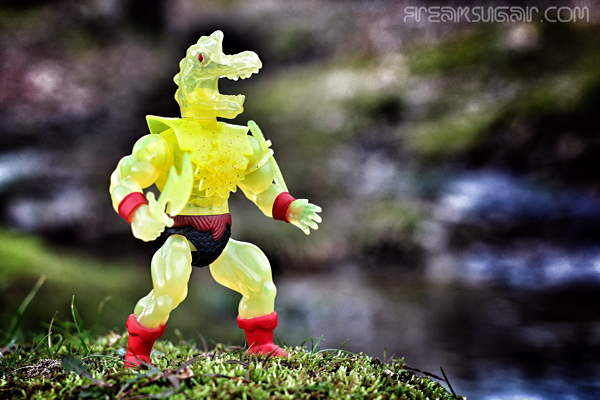 Ramyr looks like a finger monster, out for revenge on all of the people who’ve had their crusty digits shoved up his neckhole for the past couple of decades– thus making him freakiest of the 2.5 wave of Realm of the Underworld figures. He molded in yellow and comes with armor, a knife w/ sheath, and a second dagger with a lightning bolt-shaped blade. Y’know, for gutting dudes. 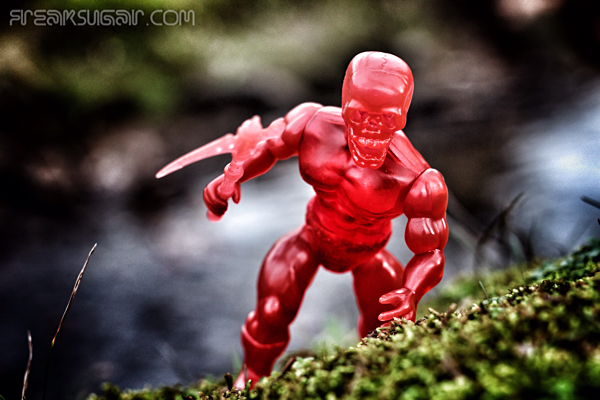 The Swamp Drone is a true villain. It has nothing to do with his ability to morph into anyone (thanks to the many included extra heads) or his penchanct for cracking skulls open with his included hammer or bone-sickle. Nope, this bastard knows how to truly drive someone insane as red is a notoriously tough color to photograph and THAT’S ALL THIS GUY IS! Arrrggghhh! Such a motherf**kin’ hassle to capture his true essence of awesomeness. Red body, red weapons, red slime– all red everything.

Returning To The Earth

Overall, these figures feature the same rigid toughness, translucent perfection, and articulation as the Prince Algor figure I looked at recently. Their box illustrations (that I woefully failed to photograph) are done by Chris Faccone and furthers the nostalgic feel of the toy line thanks to his Kirby-esque works of art. The figures feature the usual compatibility, which means they can be popped apart and rearranged with other figures from the line to create your on variations on the characters. 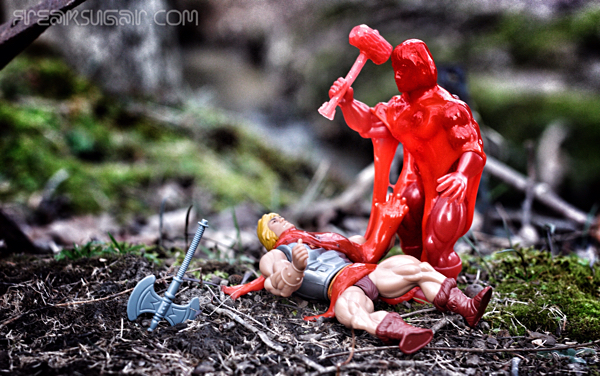 This Slimed Drone Series From the Realm Of the underworld line is listed as 2.5, and is a kind of bonus to hold fans over until Series 3 hits online soon. How fun are these figures? So fun that while shooting the photos at a nearby park, kids were so enamored with the Realm Of The Underworld figures that it melted my cold heart just enough that I let them keep em. For free. The first one is always free, amirite?

Also, if you’re down with these fantasy-based figures, then you’ll probably be very interested in checking out ZOLOCON 2016, a sci-fi and fantasy expo being held at The Fuge Convention Center in Warminster, PA on Saturday, February 13th– which is the day before Valentine’s Day… not that has much to do with anything. Just an observation.

Thanks to Zoloworld for sending along these review samples.