While, on the surface, Electric Warriors—written by Steve Orlando, illustrated by Travel Foreman, colored by Hi-Fi, and lettered by Travis Lanham—is about the violence wrought after the Great Disaster the legendary comic artist and writer Jack Kirby touched on in his DC Comics book Kamandi, the creative team have woven so much more into the story’s fabric, and that’s just in issue #1, on sale now. 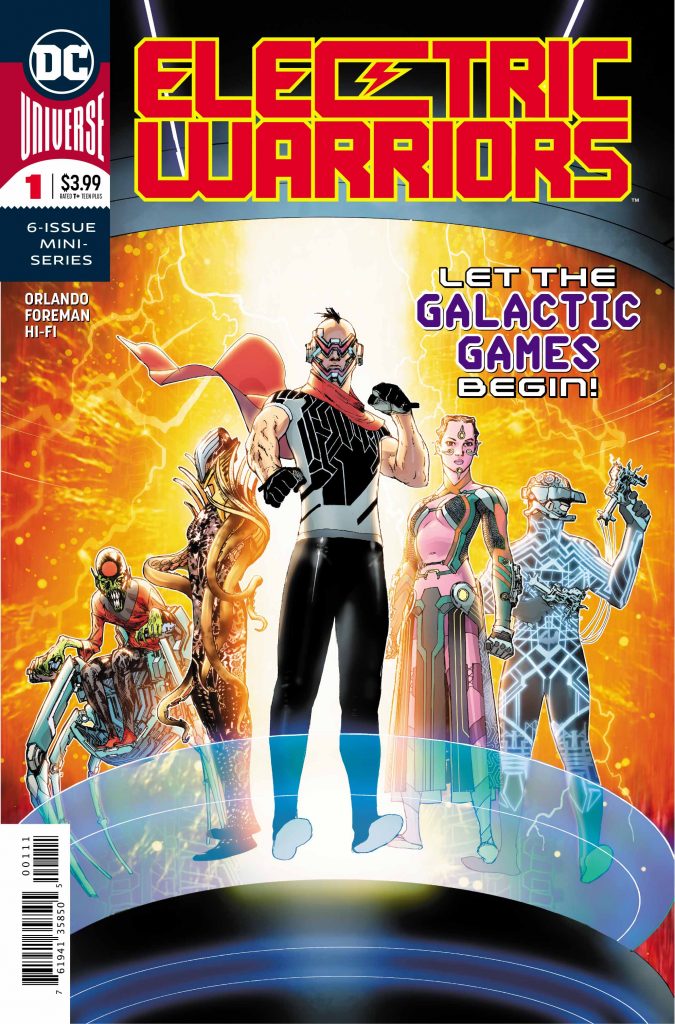 Seven hundred years from now, long after the age of heroes has come to an end, Earth and the rest of the planets and sectors of the universe find themselves always on the precipice of galactic onslaught and war. To put an end to such conflict, each sector or planet sends a champion to become an Electric Warrior, who will act as a proxy to fight through disagreements with other systems. The story itself has echoes of Battle Royale and The Hunger Games etched into its DNA, only with a metahuman bent…

…all of which create a perfect storm as to why Ian Navarro detests the concept of Electric Warriors. Humans were subjugated under the evolved animals’ rule for years until peace accords released them, leading to resentment between the various races. And while many of the future consider people like Superman to be the shining example of unification, Ian considers the Man of Steel’s involvement to have shackled humanity’s progress, leading to their enslavement by the lion people and other animal folk in the first place. So, when his brother is chosen to be one of Earth’s two Electric Warriors, Ian takes his place, not out of duty or love of planet, but because he wants to protect his brother. 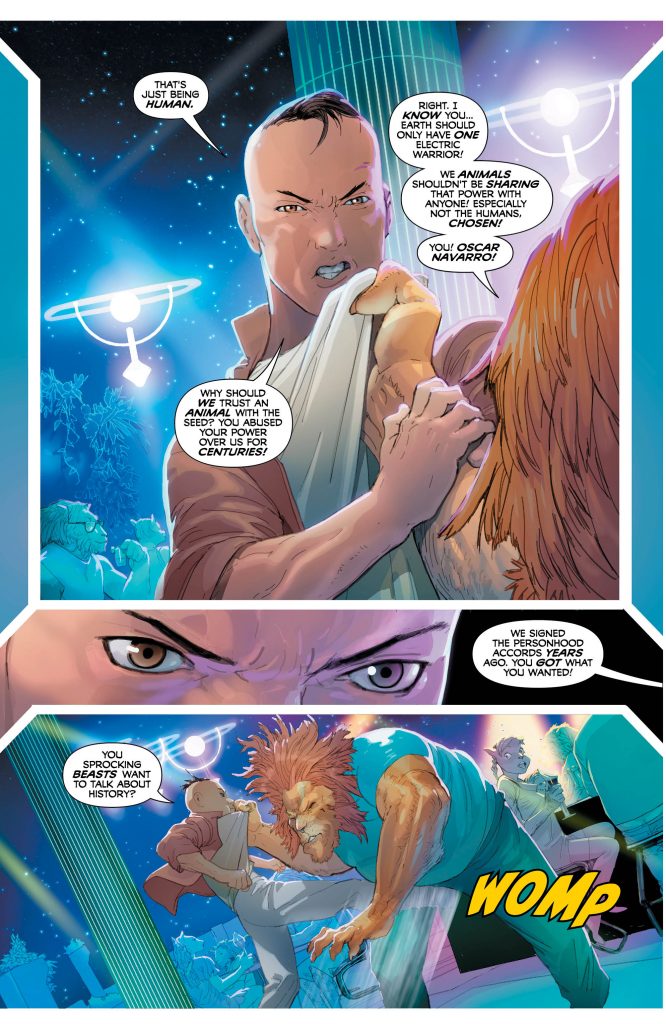 Orlando is clearly having a blast in taking the template and ideas set forth by Kirby and running with them in his own unique yarn. The near-apocalyptic future Orlando has laid out is filled with evolved animals and humans at the brink of fighting one another on the daily, if not hourly, even in the face of the larger always-looming threat of universal conflict that the Battle Royale-type Electric Warrior gladiatorial games help curtail. The human Ian’s attitudes toward the lions and octopuses with whom he lives on Earth aren’t borderline racist—they’re flat-out racist and xenophobic. That racism and xenophobia cloud his judgment, no matter their source, and it’ll be interesting to see what kind of journey he’ll take Ian on as the character confronts his feelings toward aliens, the heroes of yesteryear, and himself.

Travel Foreman has been showing his artistic dexterity for years, with its apex in the recently concluded The Ultimates title over at Marvel. However, Foreman has somehow managed to supersede even his exquisite work on that book. The vistas that Foreman creates are alien and intricate, that look to be built from the ground up with immense thoughtfulness and care. From the Abyssal Plane to the Feathered Coast, to dry land locales to the underwater deep, Foreman’s landscapes feel foreign and magical—yet never unapproachable. The Octopus people or other animal kin in Electric Warriors never feel so removed that readers cannot connect with them on a narrative level. It’s the same feat Foreman managed on The Ultimates, but with a next-level flair and craftsmanship. 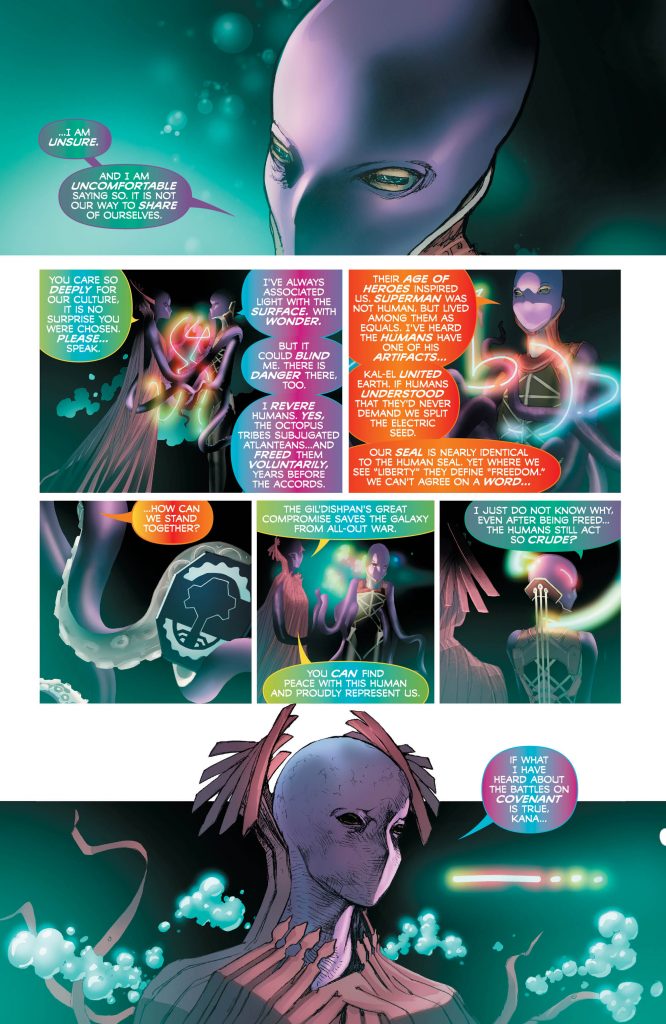 Hi-Fi’s crisp lush coloring choices make atmosphere of the briney deep to the charred battlefield hellscapes in the first issue really pop off the page—they feel like stills pulled straight from a sci-fi film. And Lanham forever knows when less is more, signaling to readers the varied speech, from human to alien, without distracting from the art.

While bringing the fantastical to life with slugfests and paralleling tales found in Battle Royale, The Hunger Games, and Stephen King’s The Long Walk, Orlando, Foreman, Hi-Fi, and Lanham also fold in a tale of racism and overcoming hate for a greater good not just to pay homage to heroes of old, but to set examples in the characters’ present.

Electric Warriors is on sale now from DC Comics.

Years after the Great Disaster, the Earth has started to rebuild and rejoin the universal coalition. In order to prevent a galactic war, different worlds throughout the known cosmos have created a new system of competitive combat to give each participating planet their own voice in the intergalactic struggle. Each world has one diplomatic gladiator, chosen to possess the Electric Seed and fight for their homeland as the Electric Warrior! Each fighter forsakes their personal life in the name of peace.

So what happens when Earth can’t choose a single combatant and sends two instead? The bruiser War Cry represents the humans of Earth, while Deep Dweller, a shape-shifter from the Octopus Tribe, represents the animal kingdom. Can they maintain one common goal, or will they tear Earth’s tenuous coexistence to shreds and destroy the rest of the universe with it? Oh, and War Cry also has a powerful relic from Earth’s past: Superman’s cape!