Devilish Liturgy: A Grendel Among the Stars

It’s been a very strange nine months since the release of Dark Horse Comics’ Grendel: Devil’s Odyssey #1. The global COVID-19 pandemic has put something of a kink in the line for my social life as many friends hunkered down. And as civil rights and police power take many other friends into the streets, I’ve found media consumption a rare balm for harsh realities. Some might read that as privilege and it is, but I’ve also had my time in the trenches of social justice, so bear with me. 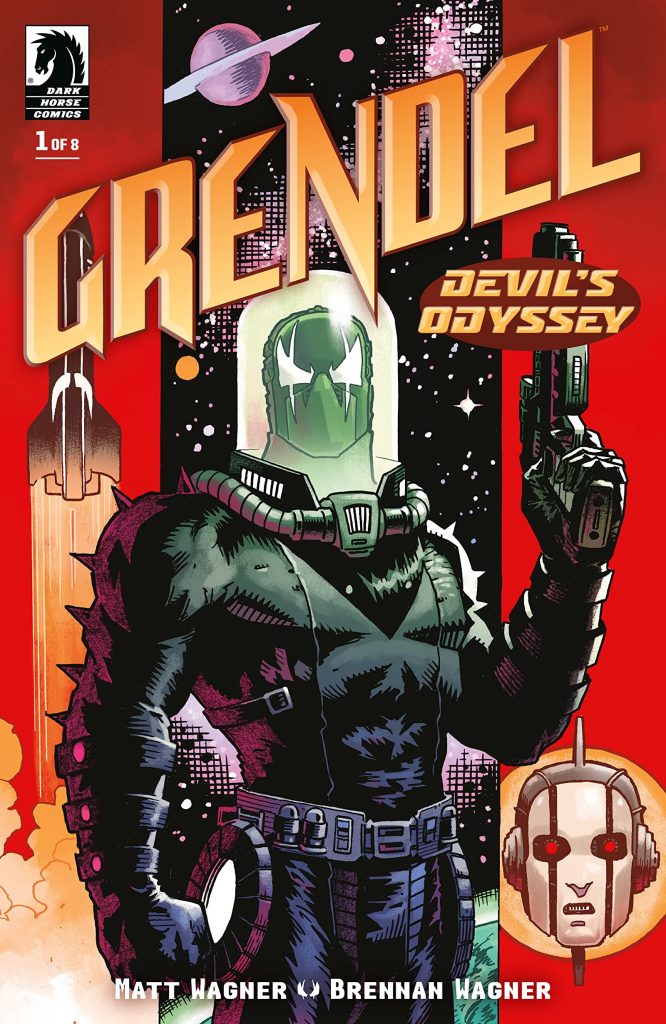 My poor neglected comic books from the past year got some organization this week which turned me back to the devil, and by the devil I mean, of course, Matt Wagner’s Grendel.

If you’re new to Wagner he’s one of the more interesting figures in contemporary American comics. Matt Wagner is an artist and writer and one of the rare few who does both well, due in part probably to decisions to ground his work in the human experience. Sure, he might be doing comics about legendary heroes, vampires, cyborgs super soldiers, criminal masterminds, or all of them at the same time. But Wagner makes them relatable. And it’s a real head trip.

Grendel: Devil’s Odyssey is a science fiction story that takes place in the far future as the last kingdom in human civilization, the Grendel Khanate, is literally collapsing. Its fantastic technological achievements are poured into one last Hail Mary pass, a faster than light spacecraft using both solar and nuclear power. The last Khan calls once again on the most essential Grendel, a cyborg loner sometimes called “the paladin.” 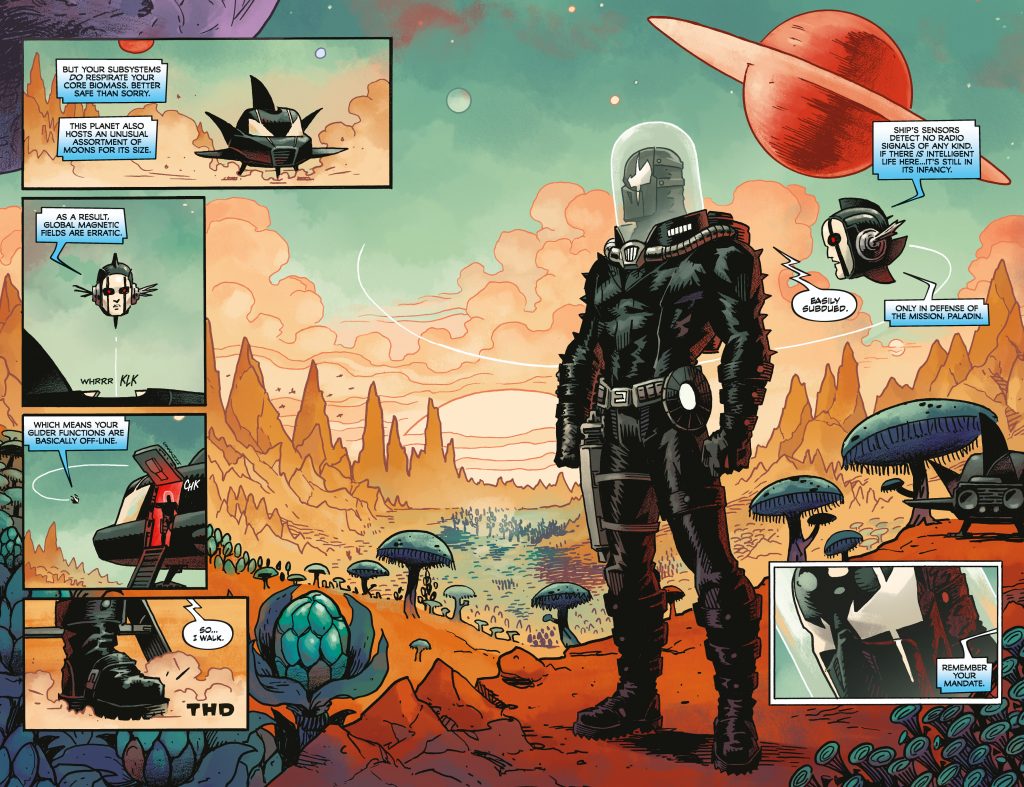 Generations earlier in Wagner’s saga, Grendel was a disenfranchised teenage prodigy who transformed himself into a best-selling author and assassin. The concept of Grendel after the death of Hunter Rose was prescient—the comic books dealt with the notion of ideas going viral long before the internet. So in this fictional universe, Grendel becomes synonymous with the idea of martial power that must be exercised to maintain order, and also power that corrupts. But Grendel itself is also seen as a spiritual force, and it’s an interesting juxtaposition.

Back to the future, the plot of this last Khan is to send the paladin, Grendel-Prime, into space to find a habitable world. Once there his ship’s primary purpose will be realized – it will become a flashpoint for cloning the paladin’s former comrades and those he might have even considered friends. Only now, the paladin will, in theory, be there to guide them and help them achieve their highest potential. The last act of the great and terrible Khanate, in essence, will be to rebirth the human race in an ideal state, but with many of the technological advances of the human race already in tow. Essentially, the Khan entrusts the greatest Grendel with the same mission he had when we were first introduced to him – to protect the bloodline of the first ruler over all humankind.

But things immediately start off poorly. Accompanied on this journey by Sigma-7, a sarcastic, floating robotic head that acts as translator and assistant, the Prime paladin encounters two alien civilizations that won’t be a good fit to live alongside this new kingdom of Grendel dynasty clones. In spite of his stoicism, the paladin seems to fulfill his own prophecy that humankind will only perpetuate violence to other worlds. Each new civilization he encounters reflects Wagner’s perception of imperfect human understanding. Wagner’s use of the Devil’s Odyssey becomes his way of analyzing failed approaches toward achieving human perfection. Four issues in now, Wagner seems to have traded the post-apocalyptic action horror of Grendel: War Child, in which Grendel-Prime first appeared, for cultural fatalism, ironically in a science fiction narrative. 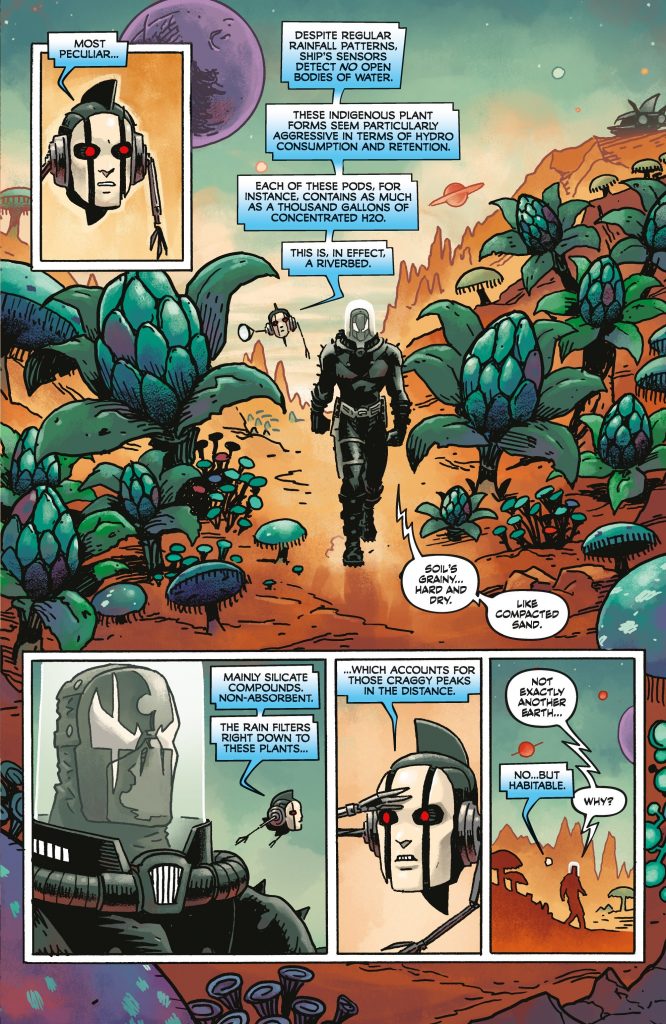 Yes, the paladin is duty bound to land his cosmic ark and descend to populate the planet with the Khan’s chosen. But Wagner is already flipping tropes and presenting scenes and scenarios worthy of Black Mirror. So what is he really up to? Thankfully, we have four more issues to find out.

Maybe the paladin will find a brave new world for humankind at the end of his Odyssey just as we try to do the same. If so, there’s little doubt it will come for any of us without further sacrifice.

Grendel: Devil’s Odyssey is published by Dark Horse Comics and written and illustrated by Matt Wagner with colors by his son, Brennen Wagner, and letters by Dave Lanphear. Visually it’s another fantastic voyage using the more senior Wagner’s spare, utilitarian storytelling and the more junior Wagner’s delightful and engaging palate and technique to frame all the spectacle and barbarism. With the pair working together, Matt Wagner’s philosophical exposition flows with the action—at times like camaraderie around a campfire in a Western and on other occasions like the desperate realizations of Blake and Schofield in Sam Mendes’s 1917.  In fact, that unique position Wagner occupies in comic books is probably more comparable to the Coens or Tarantino, even in science fiction, than it is to Spielberg or Lucas. And that’s part of why it works so well.