“Justice League/Power Rangers #2 is an ebullient yarn for folks who want a comic that is a breezy tale filled with fun character moments and want to know what happens when the Flash watches from afar when it’s ‘morphin time.'” 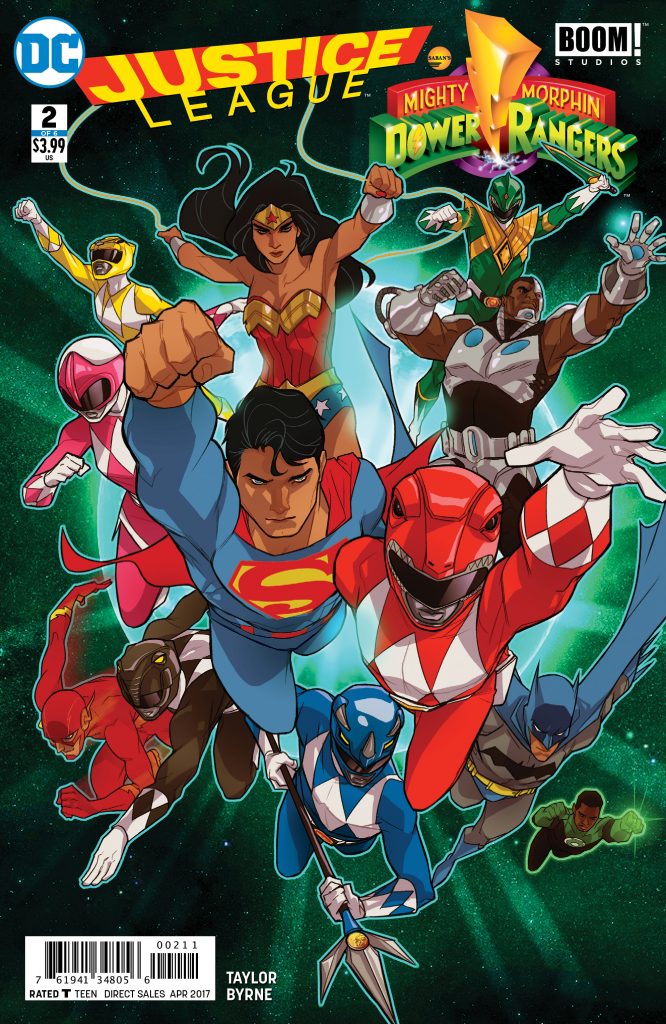 As writer Tom Taylor said in our interview prior to the release of issue 1 of the Justice League/Power Rangers miniseries, if you’re going to have a comic book romp featuring the League and the Rangers meeting for the first time, you don’t necessarily want to bog down readers with pages of exposition and ruminations about the characters’ feelings. Fans of the franchises are paying admission for high-intensity action and asskickery to spare, as well as to marvel how the groups interact with one another.

However, to say that Taylor and artist Stephen Byrne, doesn’t give us big character moments in Justice League/Power Rangers #2, out today from DC Comics and BOOM! Studios, would be a disservice to them both. The teams seems to intrinsically know that while readers want to know how such characters as the Red Ranger and Superman will interact, there’s a way to approach that meeting without being heavy-handed and letting it get in the way of the bombast that’s putting the butts in the seats. Which is exactly why issue 2 works so well. 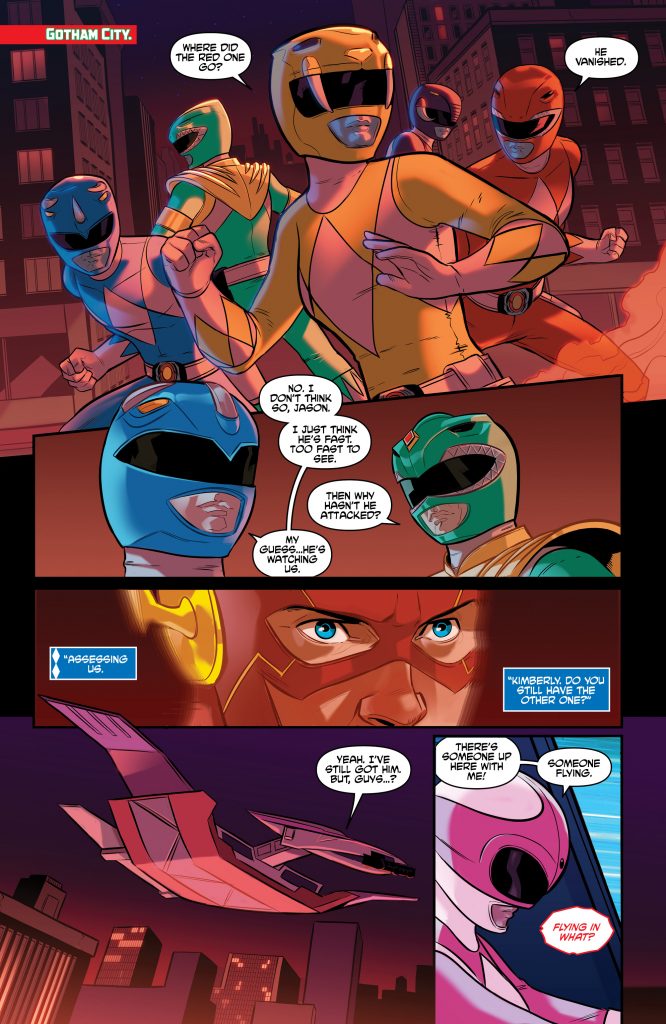 After last issue’s misunderstanding between the Justice League and the Power Rangers—each team saw the other as a threat—the Rangers eventually get the chance to explain how Zack wound up in the Justice League’s universe—after a brief dustup with the Zords, that is. However, they can’t go home quite yet: the villainous Lord Zedd has followed the Rangers into the League’s universe, so they’re bound to drag him back with them before leaving. Before the combined teams can search for Zedd, however, they’re distracted by word that giant monsters have popped up across the globe, attacking major metropolitan areas. Zedd has joined forces with Superman nemesis Brainiac to launch an assault on the Power Rangers’ reality.

Crazy town banana pants, right? But that’s what you sign up for when you’re buying your ticket for a Justice League-Power Rangers crossover, and Taylor knows that. As much love as I have for Batman villain Firefly, it’s a safe bet that Zedd was never going to be paired with him. If you’re going epic scale, you pull out a big gun like Brainiac. The man putters around space in a ship shaped like a giant head, for crying out loud. What could be more at home in the Power Rangers’ world than that? Between that and seeing the Zords summoned fairly early in the issue, Taylor has an instinct to go cinematic with his story. 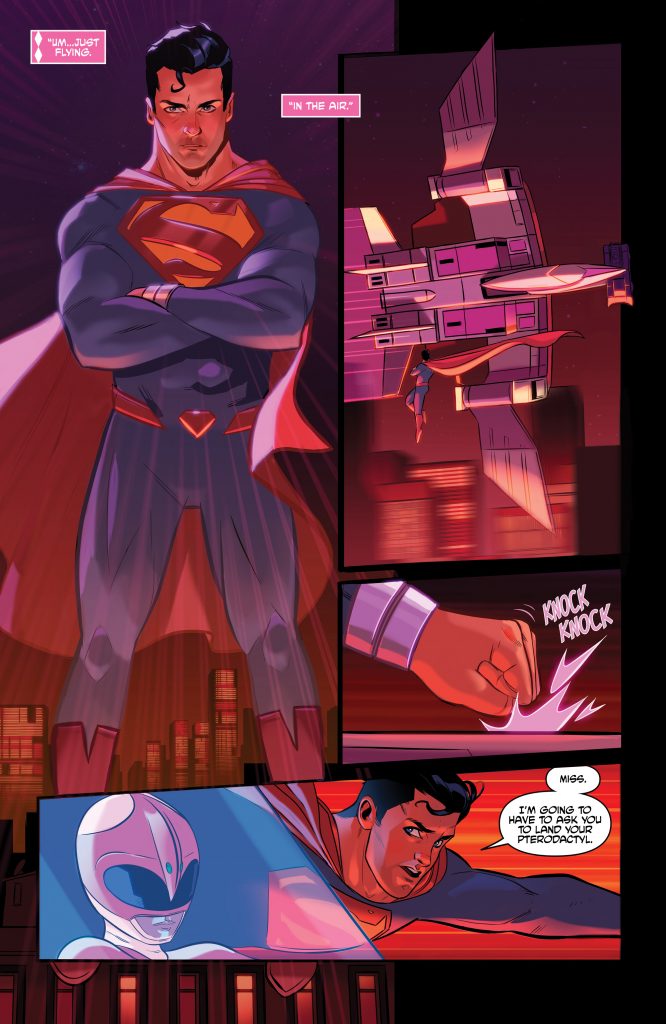 But the highlight of an issue chock-full of madcap monkeyshines and nice character moments was the interplay between Lord Zedd and Brainiac. While it never occurred to me to partner the two together, the duo is a perfect fit. Both characters are strong personalities who have their own visions of universal domination, albeit somewhat diametrically opposed. However, what really makes their interplay sing is the fact that their demeanors are on the opposite ends of the spectrum, with Zedd’s personality filling the room with his loud pomposity and arrogance, contrasted with Brainiac’s cool rationality. It’s a welcome change to the partnership we typically see with Brainiac and Lex Luthor, two characters who are generally even-keeled. Taylor’s choice makes for an unpredictability that should prove interesting later on in the miniseries.

Of course, with Byrne at the helm of the art chores, the linework in the issue is stunning. There’s an ease that Byrne approaches the characters, giving rounded edges and softer faces, that works without skewing to the side of cartoonish. With heroes as bright and visually loud as the Power Rangers, Byrne doesn’t fall into the trap of trying to make them “too real”—he knows grim and gritty doesn’t have a place in a world of Megazords and Putty foot soldiers. 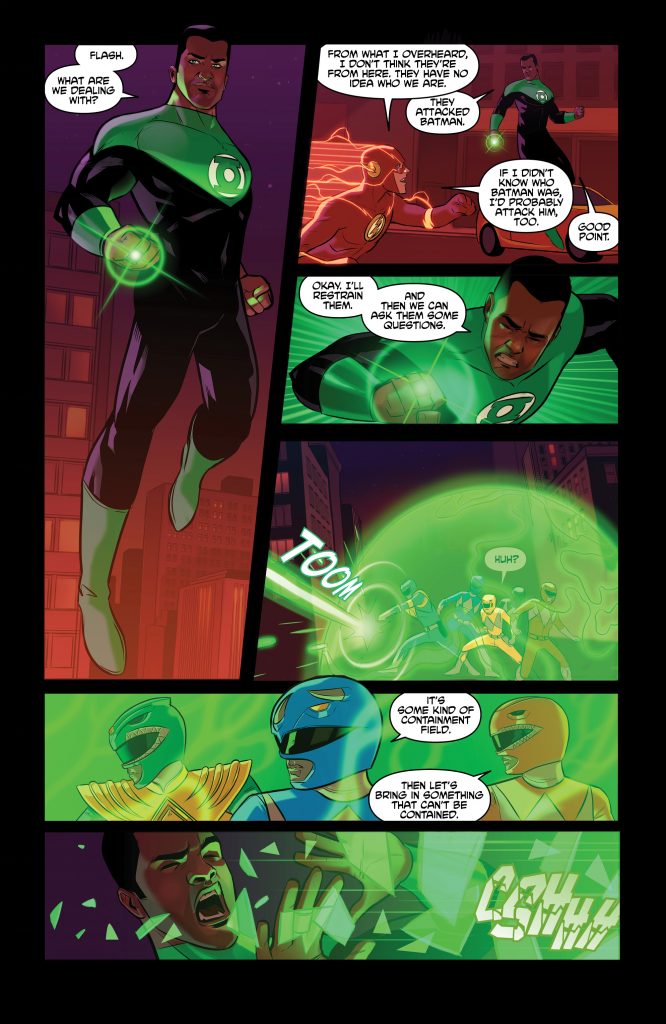 That’s not to say that his renderings of body language aren’t spot-on. On the contrary, Byrne gives us characters that each have their own unique body posturing and ways they move, even when not engaging in derring-do, something not always easily pulled off in a story with such a large-scale cast. Zack, Kimberly, and Billy move like teenagers would move. Byrne even makes the emotions of Lord Zedd, a character whose face is covered and often inscrutable, effortlessly readable just in the way he depicts his body language.

Justice League/Power Rangers #2 is an ebullient yarn for folks who want a comic that is a breezy tale filled with fun character moments and want to know what happens when the Flash watches from afar when it’s “morphin time.”

Justice League/Power Rangers #2, written by Tom Taylor with Stephen Byrne on art, is on sale now from DC Comics and BOOM! Studios.

Lost in another dimension, the Power Rangers must face a team unlike any they’ve ever encountered! In a world teeming with god-like heroes and villains as monstrous as Lord Zedd, it will take more than superpowers to survive. Can the Power Rangers work with the Justice League to find a way back home?

Review: JUSTICE LEAGUE/POWER RANGERS #2
Justice League/Power Rangers #2 is an ebullient yarn for folks who want a comic that is a breezy tale filled with fun character moments and want to know what happens when the Flash watches from afar when it’s “morphin time.”
8.5Overall Score
Reader Rating: (0 Votes)
0.0