“With The Flintstones #3, Mark Russell and Steve Pugh prove once again that the modern Stone Age family’s tales are in the more-than-competent hands of creators who both respect the source material and aren’t afraid to use satire to inject a story with heart and message.”

Have you ever seen Star Trek: First Contact? In the film, the crew of the Enterprise-E—the one with Captain Picard and company—are stuck in Earth’s past and have to aid Zefram Cochrane in achieving a successful warp flight. That flight is destined to attract the attention of the Vulcans, who make first contact with Earth, starting a snowball effect that leads to the birth of the United Federation of Planets.

After Professor Sargon (a nod to Carl Sagan) launches a chimp into space for the amusement of Pebbles, Bam-Bam, and their fellow middle school classmates, some little green aliens take notice of Earth, leading them to use Earth as their own personal spring break destination, getting drunk in the streets and killing Bedrock citizens for sport. Fred, Barney, and the gang have to take down the interloping assholes before they decimate the entire town. 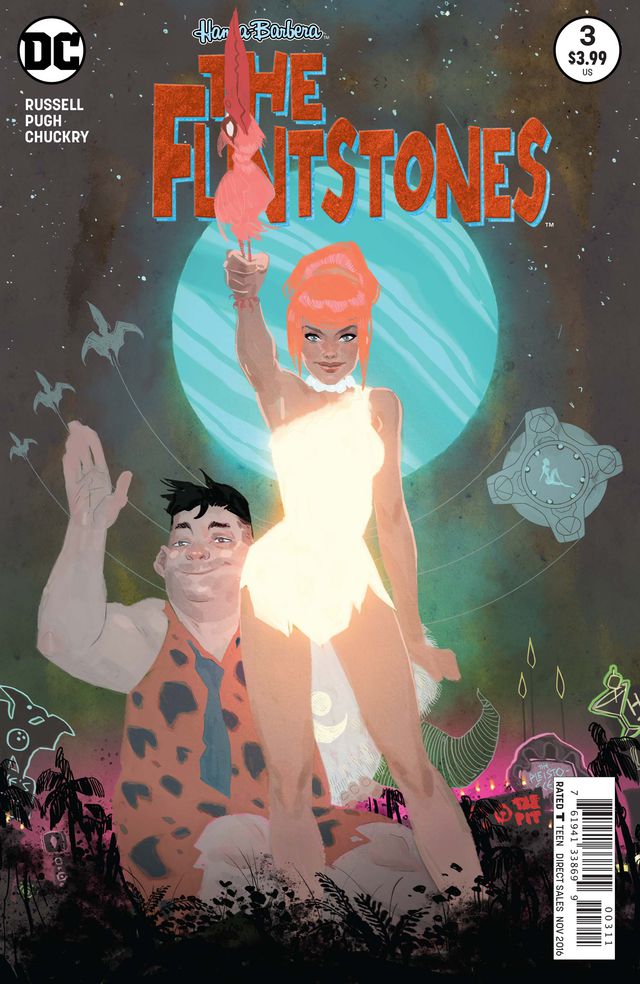 Beyond being just a funny issue—and it is funny—Russell manages to use a simple setup of a story about alien invasion and use it to comment on how we treat creatures we consider less evolved than ourselves. The scene with the chimp being launched (catapulted, whatever) into space with little regard to his safety and well-being is a perfect example. Later in the book, the aliens that overrun Bedrock seem to regard humans in much the same way—objects that are not as sophisticated as they are and, thus, can be done with as they please. It’s a wry commentary on species arrogance that’s executed artfully. Much as with Bedrock’s citizens and the chimp, the aliens view the humans as playthings until the Great Gazoo, who the other aliens either fear or respect, steps in with the wisdom to stop their shenanigans.

Further—and I don’t know if this was intentional on Russell’s part or not, but it certainly resonated with me—Russell’s tale comments on some of the ideas behind the anthropology of tourism. One strand of anthro-tourism has to do with how native cultures are impacted by and impact tourists. When the aliens first touchdown on Bedrock, the citizens try to go out of their way to meet and greet with their new visitors. However, the aliens and their actions ultimately negatively affect Bedrock—with deaths a’plenty being racked up by the green men and women as they kill Bedrockians for sport. That is, until the Bedrock’s citizens start fighting back. 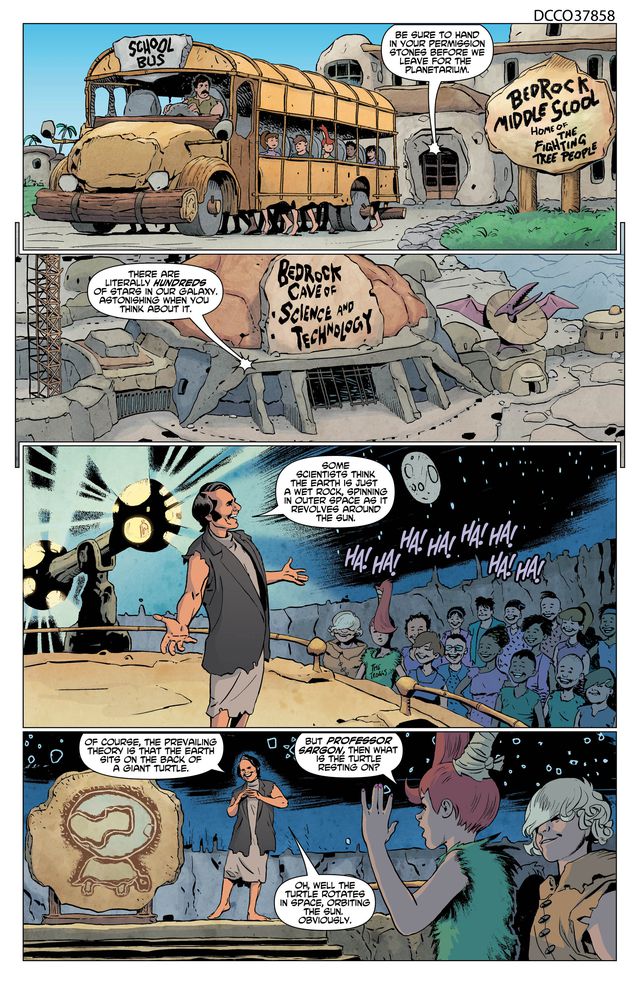 One of the folks to take up arms is Joe, a veteran of the Bedrock Wars who is not in good shape, as we first see him this issue on hold with the Veteran’s Suicide hotline. When Fred rallies his fellow members of the Veterans of Paleolithis Wars (Bedrock’s version of the VFW), Joe perks up and answers the call. To find a commentary on how we treat our veterans in the middle of a Flintstones book is unexpected, but it also was far from jarring and a welcome inclusion.

What helps push the pathos of these different threads, of course, is Pugh’s art on the series. What strikes me most about his character designs that, although Fred, Barney, and the rest of Bedrock’s residents have been given a modern spit-polish, they’re still clearly who they were in the various cartoon series they’ve starred in. While Fred has fewer round curves to his body and Barney’s nose doesn’t protrude as comically as it once did, Pugh adds flourishes from the characters’ past designs to give a nod to readers and a respectful wink. It also serves, I think, to reassure anyone picking up the book that, while the stories are obviously being updated for a 21st century audience, that doesn’t mean the baby is thrown out with the bathwater. Fred’s looks remain firmly Fred’s, Wilma’s looks Wilma’s, and so on. 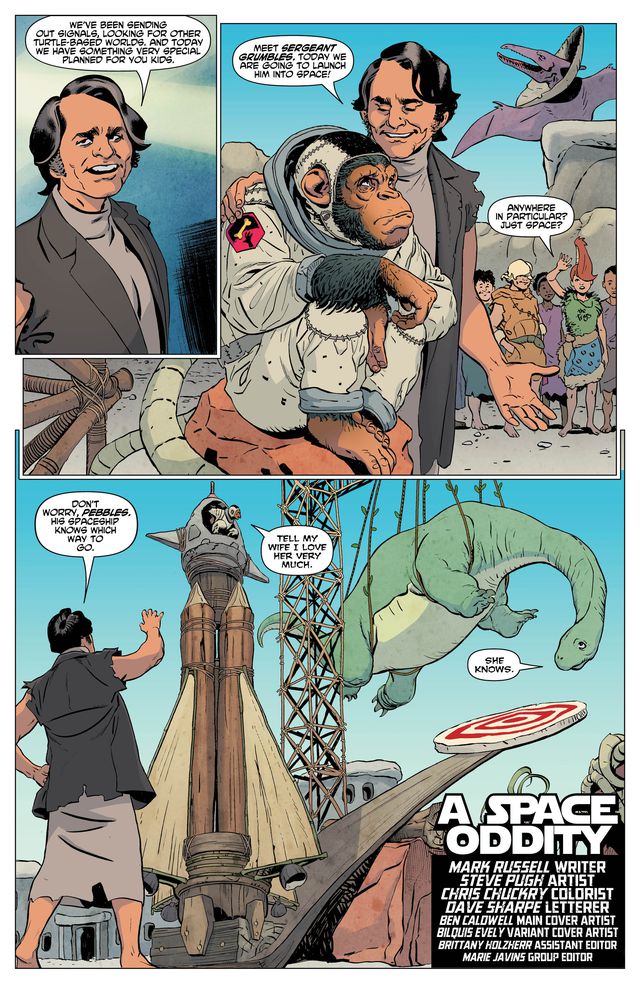 I’d be remiss if I didn’t mention the Great Gazoo. His inclusion as one of the aliens and the meaning of his name were a nice twist that was a nice callback to Gazoo’s interactions with and annoyance of Barney and Fred in the original Flintstones cartoon.

With The Flintstones #3, Mark Russell and Steve Pugh prove once again that the modern Stone Age family’s tales are in the more-than-competent hands of creators who both respect the source material and aren’t afraid to use satire to inject a story with heart and message.

The Flintstones #3, written by Mark Russell with Steve Pugh on art, is on sale now from DC Comics.

A field trip to the planetarium unexpectedly results in an alien invasion. As interplanetary spring breakers overwhelm Bedrock, Fred, Barney, and the Loyal Order of the Water Buffalos are called into action.

Review: THE FLINTSTONES #3
With THE FLINTSTONES #3, Mark Russell and Steve Pugh prove once again that the modern Stone Age family’s tales are in the more-than-competent hands of creators who both respect the source material and aren’t afraid to use satire to inject a story with heart and message.
9Overall Score
Reader Rating: (0 Votes)
0.0