The massive and raucous crowd, packed into a building on the Tennessee State Fairgrounds, began that defeating chant in unison after seeing “The Iconic” Matt Hardy take a suplex, by Jay Briscoe, from the top rung of a fifteen foot ladder and come crashing through a table, splintering it and his body in the process. This was but one of the amazing spots I witnessed during Ring of Honor: Best in the World, the wrestling promotion’s first pay-per-view event. It was easily the most exciting pro wrestling show I’ve ever attended, and they let me photograph it! Read along for my tale of submissions, streamers, and (sadly) sobriety at ROH’s “Best in the World”!

For the uninitiated, Ring of Honor was founded in 2002, and from the very beginning, has been a place for some of the best and brightest upcoming talent to showcase their skills for an audience more enthralled by the unparalleled athletic abilities of the wrestlers than the drama-packed escapades of the larger promotions. CM Punk, Austin Aries, Cesaro, Sami Zayne, Daniel Bryan, Seth Rollins, and many more have made names for themselves and honed their craft inside the squared circle at ROH shows. Ring of Honor also has a code– that is semi-strictly enforced. In a way. Sorta. 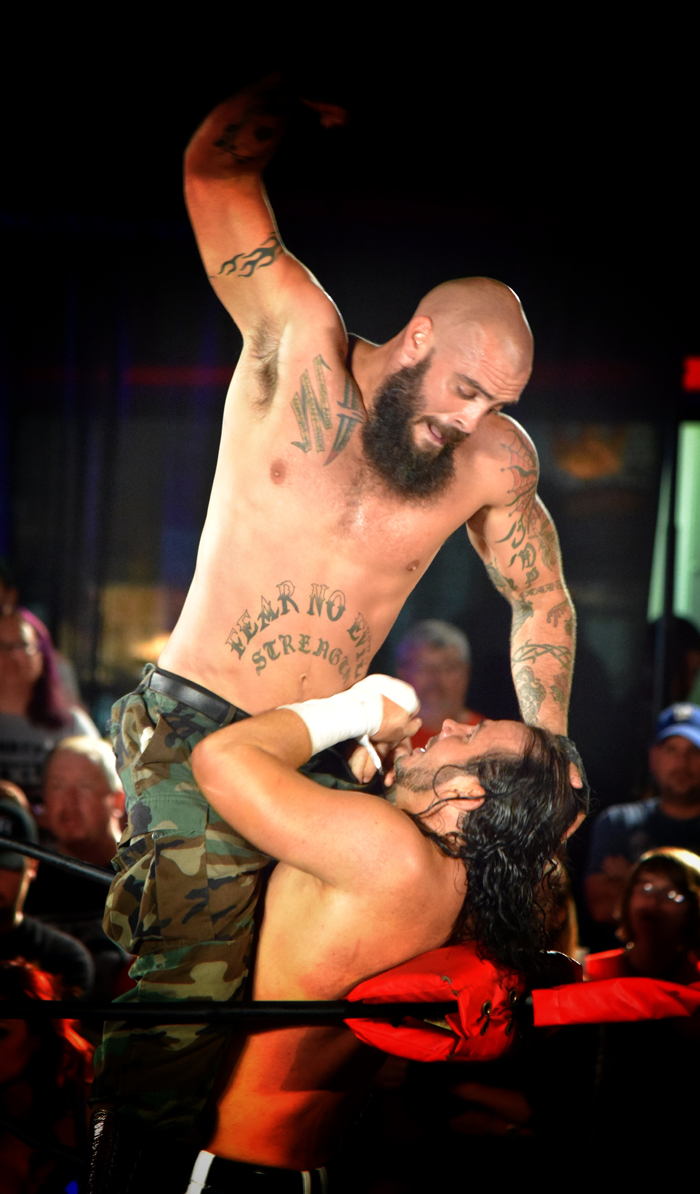 The Code of Honor:
1. You must shake hands before and after every match
2. No outside interference
3. No sneak attacks
4. No harming the officials

Standing in line, under the crooked and gouged metal awning that ran the length of the building, wasn’t the most pleasant of experiences. The summer heat was only compounded upon by the increasing humidity as rain clouds slowly moved in across the sky. Still, as sweat beaded it’s way down my back and my shirt began to increasingly stick to my skin, the anticipation for what was to come kept up the spirits of the awaiting crowd (who traveled from all over the eastern US). Like ECW before it, Ring of Honor fans are some of the most dedicated and passionate around. Instead of a long line (it wrapped around the building and far down into the parking area by the time the doors finally opened) chocked full of bitching and moaning, conversations could be overheard discussing favorite wrestlers, if there were going to be any surprise matches, and general “I remember the time” tales. Why am I wasting words telling you about the line to get in? Because something kind of incredible happened about an hour before the attendees were allowed in, that’s why! Be patient. Geez. What I was getting to, in a roundabout way, was that while the masses were all standing in semi-single file line, the doors opened and out came one of the executives of Ring of Honor, Cary Silkin, who then proceeded to walk the line, shaking everyone’s hands and thanking them for coming out to the event. F**kin’ classy. Now, let’s get into the action!

Bobby Fish kicking the shit out of Christopher Daniels

The card was stacked with top-notch matches, with not a single time-filler– which made it incredibly tough to find a time to put down the camera and relieve my increasingly full bladder. My bladder being jam packed full of Sprite instead of sweet, delicious beer thanks to accidentally leaving my ID at home. Thankfully, ROH had an intermission midway through the broadcast. Not counting said intermission, the crowd was hot the entire time, throwing streamers into the ring during the entrances of their favorites, and booing the hell out of the guys that weren’t. As you’ve probably picked up on, I’ve talked more about the fans than the performers and there’s a very good reason for that. The communal act of chanting “This-is-Wrestling” and gasping in unison when the unexpected occurs (Mark Briscoe jumping from the top rope and outside the ring, for example) is a huge, huge part of the experience! You can liken pro wrestling to any sporting event in that regard. Now, I’ll list the matches and give a couple thoughts on each one– or maybe I’ll rant for a paragraph or two. I’m in control here!

Truth Martini was handcuffed at ringside.

Matt Tavin, preparing to give Truth a face fulla chair!

Kazarian and Bobby Fish: The Best of Friends!

Daniels acrobatics from the top rope

GRUDGE MATCH
MATT HARDY/MICHAEL BENNETT W/ MARIA VS. JAY & MARK BRISCOE
This was Match of the Night for me. Once Nigel McGuinness made it a “No Disqualification” affair, shit got real. Tons of chairs, a ladder, and two demolished tables littered the ring after the battle was over. Oh, and Nick Searcy (Chief Deputy Art Mullen on FX’s “Justified”) took a Hellacious beating at the hands of the Briscoes!

MR. WRESTLING VS. THE LAST REAL MAN
KEVIN STEEN VS. SILAS YOUNG
It was great being able to witness one of Steen’s last appearances in ROH. Silas fought like a real man, but couldn’t escape his fate after the dreaded Package Piledriver!

SUBMISSION MATCH
RODERICK STRONG W/ ADAM PAGE VS. CEDRIC ALEXANDER
This match flowed really well, and both Strong and Alexander managed to keep it fresh and the crowd interested. Not the easiest feat for a submission-based match. They put on a wrestling clinic.

6 MAN MAYHEM – WINNER GETS FUTURE TV TITLE SHOT
ACH VS. TAKAAKI WATANABE VS. CAPRICE COLEMAN VS. TADARIUS THOMAS VS. BJ WHITMER VS. TOMMASO CIAMPA
The night kicked off with this display, and it was a flurry of action from bell to bell. The return of Tommaso Ciampa had him pegged as the obvious winner in my mind, but ACH (and the 450 Splash) would not be denied!

The Briscoes make their entrance

Michael Bennett is about 2 seconds away from eating concrete.

Hardy getting acquainted with the ladder

THIS was the highlight of the night!

ROH WORLD CHAMPIONSHIP
MICHAEL ELGIN VS. ADAM COLE (c)
First, I’d like to point out that Adam Cole fought tooth and nail like a true champion. However, cutting Elgin’s mullet off as he was strapped to the ropes a few nights before– well, that might have been a bad move. I lost track of the bucklebusters he took during the course of the match and I gotta feel like that sheered mullet added fuel to Elgin’s fight. Oh, and that whole thing about putting MsChief in the figure-four. A triple-powerbomb from Elgin finished Cole and Elgin finally obtained the ROH World Title! Streamers for days!

ROH WORLD TV CHAMPIONSHIP – TRUTH MARTINI WILL BE HANDCUFFED TO THE RING POST
MATT TAVEN VS. JAY LETHAL W/ TRUTH MARTINI (c)
Truth DIDN’T take a beating with a chair from Tavin thanks to the over-zealous security. Lethal walked away with the belt as well, so the “House of Truth” won out in the end.

Steen attempted a powerbomb on the apron, but Silas caught the ropes.

Adam Cole went into BITW as the ROH Champion

Cole going to meet his pals on the outside

Elgin carrying his victim to the guardrail…

Adam Cole after Elgin kicked out at 2.

Overall, I had a fantastic time at “Best in the World” and am hoping to hit up another ROH show as soon as possible! I highly, HIGHLY recommend seeking them out to all fans of professional wrestling. Ring of Honor’s next Pay-Per-View event will be “Final Battle” sometime around December, so keep checking ROHWrestling.com for all announcements!