Marvel Comics’ alien race the Skrulls have often acted as foils to the heroes of Earth, with the likes of the Fantastic Four and the Avengers striving to stave off the attempts of the Skrulls to conquer our planet. However, just as all humans are not “bad” or “good,” the shapeshifting aliens have occasionally been shown to have shades of grey to the morality. What does the constant stress of trying to takeover Earth or other worlds do to Skrull relationships, either romantic or familial?

That’s the conceit of the miniseries Meet the Skrulls, written by Robbie Thompson, with art by Nico Henrichon and lettered by Travis Lanham. In Meet the Skrulls, two agents of the Skrull Empire, along with their children, are attempting to infiltrate Earth society for an eventual takeover of the planet. Thompson examines what that kind of mission and goal does to the family unit and how it affects the mission as a whole.

Mr. Thompson spoke with us recently about the idea behind Meet the Skrulls, making the Skrulls sympathetic characters, working with the rest of the creative team on the book, and what we can expect to see in the climax of the miniseries. 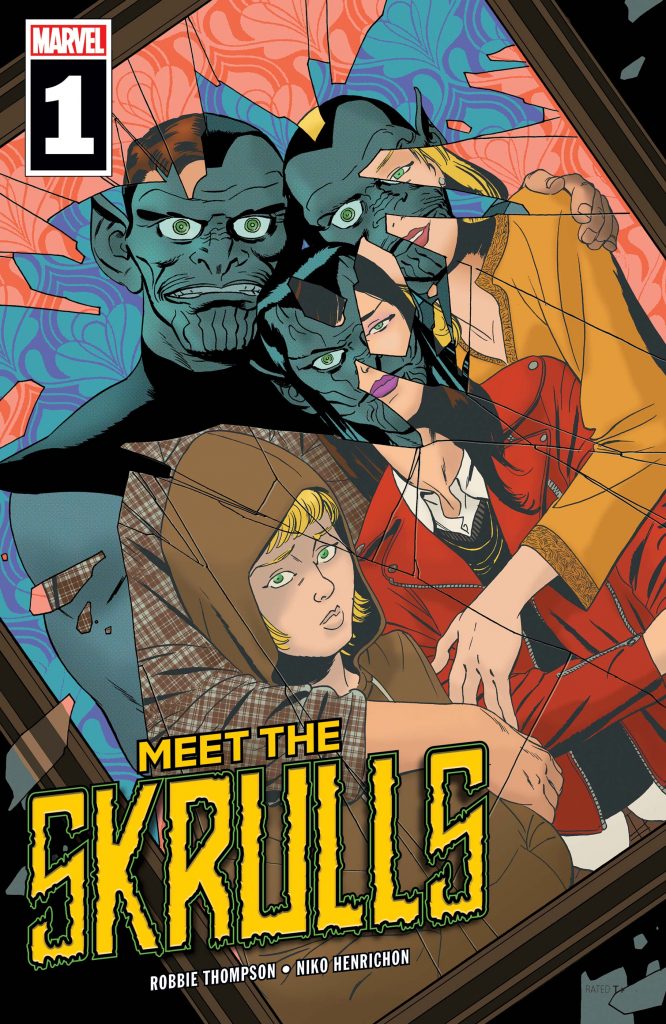 FreakSugar: For folks reading this, what can you tell us about the conceit of Meet the Skrulls?

Robbie Thompson: Meet the Skrulls is The Americans in the Marvel Universe. A family of Skrulls living among us as humans, trying to infiltrate the corridors of power and disrupt our world, priming it for a Skrull takeover. It’s a heightened family drama mixed with espionage and superheroes. Fun for the whole family!

FS: While the Skrulls in this book have an overarching goal, the story feels more personal and focused than other Skrull stories we’ve seen. How long has this idea been gestating?

RB: I’ve loved the Skrulls since I first encountered them in the pages of Fantastic Four. The FF Annual 17 really stood out to me as a kid, and sparked my imagination about the Skrulls and what they might be like when they’re not invading Earth. I pitched the concept over a year ago, and have been working on it with Editor Nick Lowe and Kathleen Wisneski over that time, shaping the characters and story. The timing with the Captain Marvel movie has been great, but we’ve been working on this one a while! 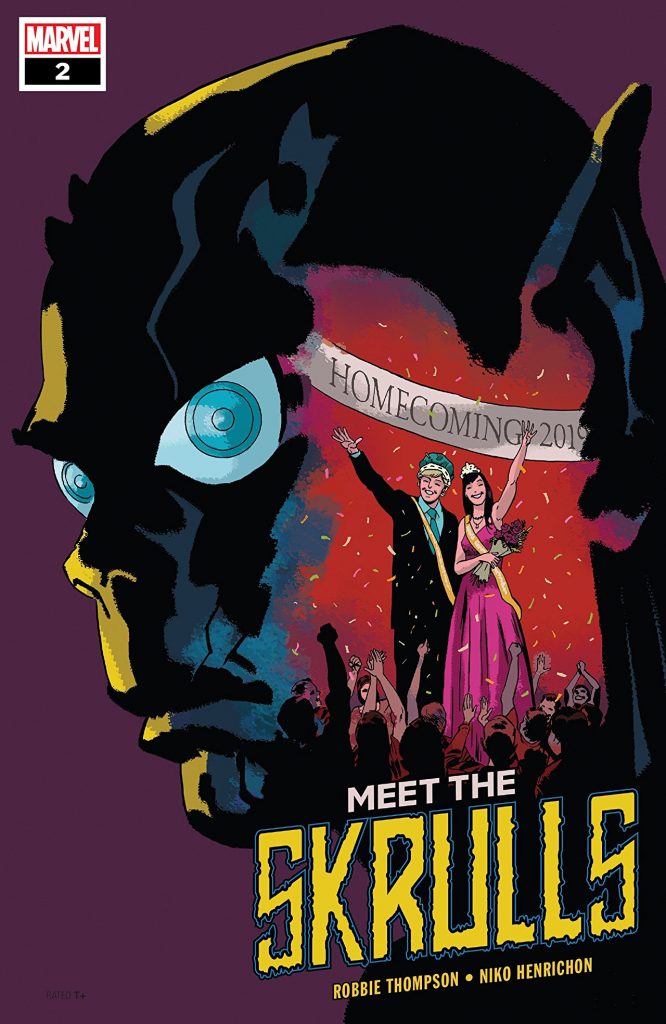 FS: You have a bevy of diverse characters in Meet the Skrulls? What can you tell us about the main players of the book?

RT: The family is led by Carl and Gloria, two badass Skrulls who have fought alongside one another for years. They were trained by the Skrull Empire as spies, and sent to Earth to work undercover. On Earth, they’ve raised their children, Madison and Alice, and trained them to be spies as well. Each family member has a mission. And each family member has been affected by their life undercover in different ways — Alice taking it the hardest. She’s having trouble fitting in, as a teenager and as a Skrull. It’s not easy wearing a mask all the time, and it’s challenging to parent when you raise your children to be professional liars. We also have their handler, Moloth, who wears many faces, working behind the scenes. He and his bosses are worried about Alice, and her inability to infiltrate her peer group for the larger mission. 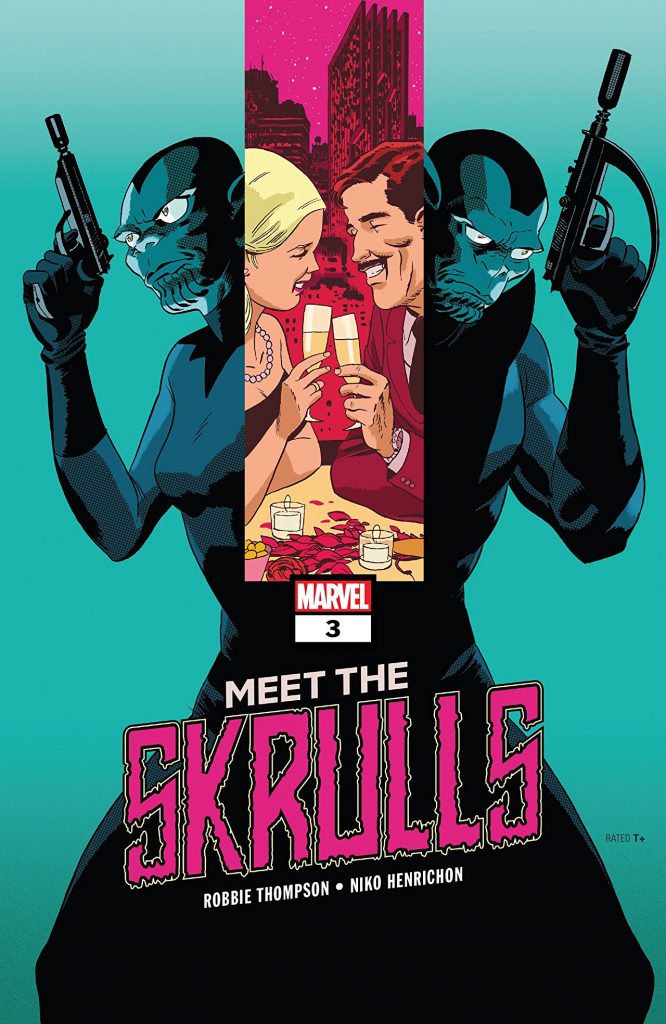 FS: So often the Skrulls have been portrayed as villainous, but some of them seem downright sympathetic. Was that one of your goals with Meet the Skrulls?

RT: Absolutely! The villain never thinks they’re the villain of their story, for starters, and also we wanted to dig into what it’s like to be a shapeshifter, what it’s like to live a lie, what it’s like to bend to the will of who you are pretending to be. Do you lose yourself in the process? And since they’re pretending to be human, what light can they shine on humanity from their outside perspective? I loved Miami Vice as a kid, and Crockett and Tubbs would wrestle with these themes and issues every episode. There’s a heightened reality to the story we’re telling, but at its core, we’re hoping it’s relatable — we all wear masks, we all pretend, and what’s it like when you take that mask off, or what happens when you can’t take that mask off? It’s all rich ground to explore, especially through the prism of a family. 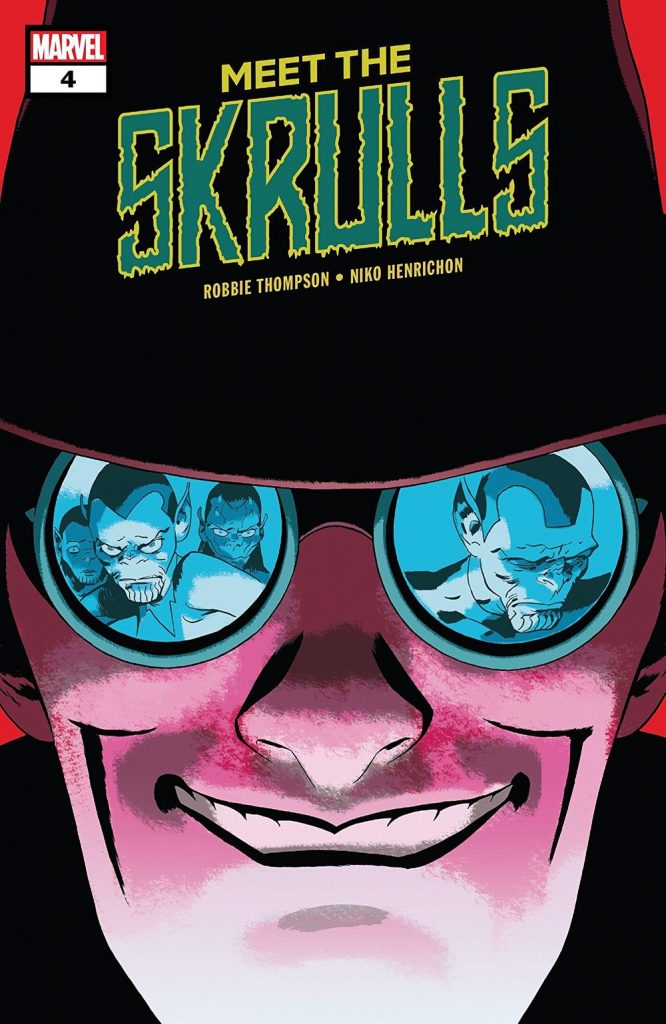 FS: We see that the Skrulls have pursuers on the trail and are organizing a way they can’t hide. What can you tell us about those pursuers?

RT: Well, they’re the good guys… right? But they’re also trying to eradicate all Skrulls. Including the Warners! This mysterious group will be revealed as we move through the mini-series. They’re seemingly connected to Stark, but we’ll see over time that they’re very much their own, darker thing…

FS: Niko Henrichon is phenomenal as always, bringing depth and sadness to so many of the characters. What has the collaboration process been like with Niko?

RT: Niko is an absolute dream to work with. This book doesn’t work at all without his character work, design, and storytelling. I like to write in a looser style, and Niko really takes what’s on the page and plays with it, making it his own and adding so much depth, nuance, and brilliance to each panel and every page. He’s also coloring as well, adding more layers with each step of the art. I can’t say enough great things about him.

Niko and Travis Lanham, our letterer, really pair well together. Travis helps finish bring each character’s voice to life. We’ve also been blessed with amazing covers by Marcos Martin. Each one better than the last, as well as brilliant variants from Declan Shalvey and Skottie Young. Nick and Kathleen have built an amazing team on this book and I’m so grateful to them for their hard work. 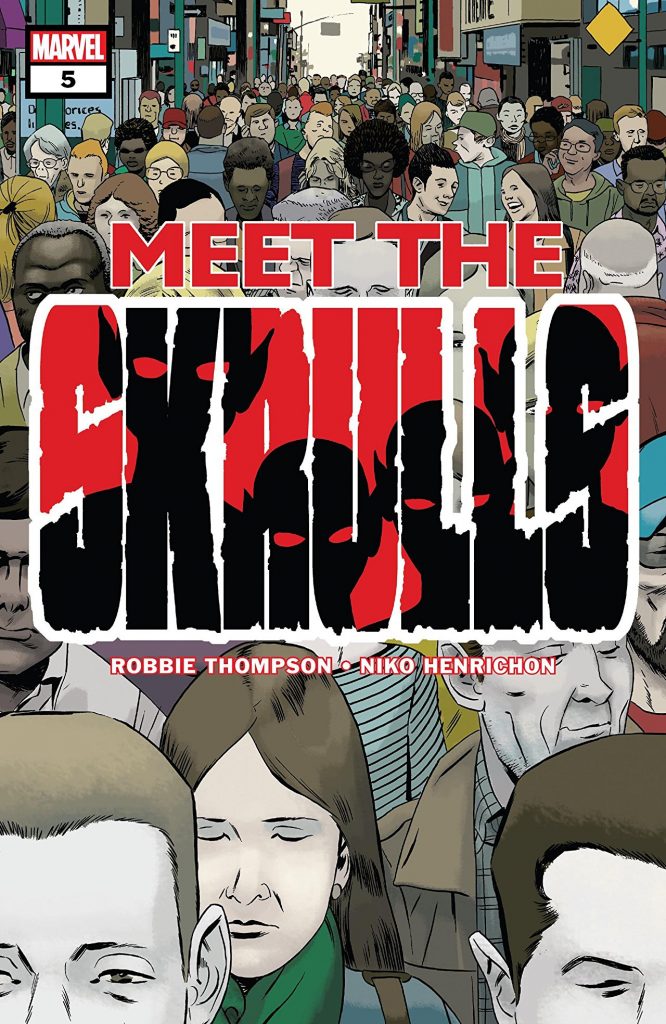 FS: Is there anything you can tease about what we can expect later in the miniseries?

RT: Family drama! Things are going to get very, very intense for the Warners as our story unfolds. I’m not sure they’re all gonna make it out of this thing, to be honest! But despite them being Skrulls, I’m rooting for them!

Meet the Skrulls #5, the epic conclusion to the miniseries, debuts Wednesday, June 5th, from Marvel Comics. If you haven’t read Meet the Skrulls yet, give it a go, as it will make you see the aliens in a completely different light that they are often painted. Thompson the whole team paint some of the most sympathetic “villains” you’ll come across in comics.

From the official issue description Meet the Skrulls #5:

The Warner family may be alien infiltrators trying to bring down human civilization, but could PROJECT BLOSSOM actually be WORSE?! Don’t sleep on the book that everyone will be talking about for years to come!