While having never worn it personally, I’m just going to hazard a guess and assume that if I tried to apply makeup to look like the best known transvestite from Transsexual, Transylvania, I’d end up looking like a raccoon who tried to paint his face during an earthquake. That said, I imagine that MAC Cosmetics’ recently announced line of makeup based on the cult favorite The Rocky Horror Picture Show could make even me look and feel beautiful. Maybe. 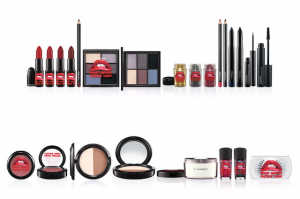 In celebration of RHPS’s upcoming 40th anniversary next year and in anticipation of Halloween, MAC Cosmetics partnered with RHPS to release cosmetics based on fan favorite characters from the film, such as Magenta, Columbia, and, of course, actor Tim Curry’s star of the show, Dr. Frank N. Furter. From the look of the pictures included with the announcement, the RHPS/MAC line looks to give fans of the film choices of ALL OF THE EYE SHADOW, GLITTER, AND LIPSTICK. Seriously, look at the pics. It’s questionable whether even the good doctor’s creation Rocky Horror could carry all of that.

In a statement announcing the line, RHPS producer Lou Adler spoke to the staying power that the cult classic has had through the generations since its initial release. “It is hard to believe it has been almost 40 years since we released The Rocky Horror Picture Show, but as we approach this milestone anniversary, the film is as outrageously entertaining and relevant as it ever was,” he said. “It has certainly taken on a life of its own, and continues to transcend generations and hold a solid spot in pop culture year after year.”

It’s a wonder, really, that it took this long to inspire such a cosmetics line or for a company to form such a partnership. The combination seems like an obvious marriage of pop culture love and corporate synergy. From fans of the film showing up to viewings decked out in all of the avant-garde makeup and accoutrement of their favorite characters to enthusiasts merely being inspired by and incorporating the film’s cosmetic sensibilities into their everyday lives, the market for a RHPS makeup line has been screaming to be released for years. Luckily, it didn’t take doing the time warp for the line to finally see the light of day.

MAC Cosmetics’ makeup line based on The Rocky Horror Picture Show will be available to purchase online September 29 and in stores October 2. Look for updates on MAC’s official website. In the meantime, reacquaint yourself with Dr. Frank N. Furter and the gang and check out this clip below.