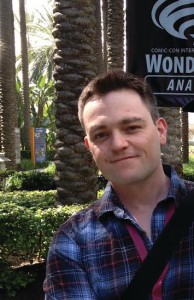 Fear is evolving, almost like an animal. As we get older and move into adulthood, what we once feared–monsters, ghosts, goblins–tends to part the way for the fear of dying and the fear of failure and the fear of abject cruelty to take root. Writer Scott Snyder (Batman, American Vampire) clearly knows this, as Wytches, his new horror comic for Image Comics, explores what happens when those childlike fears and human fears collide. In part 1 of my interview with Mr. Snyder, we look at how Charlie and Lucy Rook and their daughter Sailor are dealing with the wytches that are plaguing their family and how their own personal fears empower their tormentors.

FreakSugar: Issue 3 of Wytches gives a glimpse of what might have happened to Sailor after the school bus incident. How panicky are the parents and how do you see each of them viewing Sailor’s disappearance?

Scott Snyder: Part of the fun was instilling this sense of paranoia in the parents where they have a sense that something bigger is going on and to cast suspicion on the townspeople. One of the things that we explore in the series next issue is how long the town has been feeding the wytches. So there’s a lot of paranoia that comes into this issue and it’s something that’s a lot of fun to play with. As a parent, there’s nothing scarier than the thought of losing your child or your child being missing. It’s so potent writing it for me that it’s hard to move through those scenes. At the same time, it’s the best feeling in the world knowing that you’re writing something poignant.

FS: To what degree do you think the parents believe Sailor’s account of the incident with the bully? Will we see them eventually come around to the idea that Sailor certainly experienced something beyond a bump on the head?

SS: Oh yeah. A lot of what the book is about is that when you have kids, part of that is protecting them from kid fears: monsters under the bed, ghosts in the closet. I think in a lot of ways, what Charlie has to realize, and Lucy too, is that Sailor is entering a time of her life where she’s moving away from those kid fears and into the world of human cruelty. And they want very much that what happened to her was real and completely prosaic and that it was just a bully. And I think that the most terrifying thing about the wytches is that they straddle the line between human fears and kid fears. They are these monsters, they really exist, they are those horrifying, twisted reflections of us that are cannibalistic and predatory. But what makes them even scarier to me is that they represent these adult fears of human cruelty that exist in human nature and go after people who are pledged to them. So that’s why I like them as monsters because they exist in the kid realm of big, scary monsters who live in the trees and the adult fear realm of what humans do to one another.

So, in that way, I think that’s the reason the parents are having such a hard time believing that something happened in the real in the woods with Annie. I think that when they encounter the monsters, it’s not going to be that they’re not going to be so much terrified that there are monsters in the world, but that those monsters embody the bigger fears of the world.

FS: While Charlie seems to be the dreamer, his wife, as you’ve said, is the rock of the family. Do you think Charlie struggles with his dreams and his familial responsibilities? Does that make him easy prey for the wytches?

SS: Yes, very much. One of the things that becomes very clear next issue [issue 4], you see Charlie at his worst as a dad. One of the things he struggles with is that he wants to make something important, something he cares about as a dad. But I think years and the emotional spectrum that he’s used to feeling, it’s changed so much when he had a child, and a nervous child like Sailor. And the notion that he might have another one now is just overwhelming. So, in a way, what the wytches really prey on, almost like sharks, like blood in the water, is that that they can sense a neurological unhappiness, a longing, in people that make them creep closer. So there’s a question whether Charlie’s state of mind drew them closer to the family, even if they were pledged to someone else, like Annie. That’s part of the mystery: why are they after this family? And so Charlie will have to start looking at things he’s felt that he doesn’t want to admit that he’s felt.

FS: As much as the wytches prey on our scariness, do they also prey on our penchant to lash out at what we fear?

SS: I think they want you to give in to your fears. They want you to offer them someone so they can offer you something to alleviate those fears—dying, dying unloved—all those things they can cure, fear of illness. They have this knowledge of an ancient science that can cure things that modern medicine can’t. So ultimately, they want you to come see them in the woods.

Check back here tomorrow for part 2 of my interview with Scott Snyder. Also be sure to check out our 10/10 review of Wytches #3!