The past few days have seen a flurry of news regarding Star Wars: Imperial Assault, the forthcoming Fantasy Flight Games aiming to be one part adventure campaign board game, one part skirmish wargame. Fitting both gameplay styles into one box is easier said than done, but FFG’s track record with the Star Wars license has been all hits and no misses. Imperial Assault is certainly ambitious, and it may pose the publisher’s biggest challenge yet.

The core of this package strongly resembles one of FFG’s flagship titles, Descent: Journeys In the Dark, a dungeon adventure game enjoying major success in its Second Edition incarnation. Perhaps now that the wrinkles have been ironed out of Descent, it is ripe for a Star Wars re-theme? As for the skirmish aspect of Imperial Assault, FFG is certainly giving the people what they want. X-Wing Miniatures Game fans have been clamoring for a ground-based battle system for years (and there are more than enough forum threads to prove it).

Looking at the early previews, Imperial Assault is going to be an in-depth experience, filled with everything you would expect for game systems of this type: loads of characters, stats, items, weaponry, and of course, a unique die system to resolve combat. And when we say loads of characters, we mean it. The base game comes with quite a variety, including two “built in” expansions containing Luke Skywalker and Darth Vader, but FFG has already lined up a buffet of additional product. The base game will be accompanied by seven expansion packs (featuring the likes of Han Solo, Chewbacca, and IG-88) plus an accessory pack of eleven additional dice. There is no waiting to see if Imperial Assault catches on; Fantasy Flight has already gone all-in.
Only time will tell if this is wise, though. FFG is not the first publisher to attempt merging adventure and skirmish gameplay under one banner. We are only a year removed from Wizards of the Coast’s foray into Dungeon Command, the squad-based combat game with cross-compatible miniatures and stat cards for the D&D Adventures line of board games. That was a solid brand with two well-produced games, but at last check, both were hitting clearance shelves. Did Hasbro have WotC on too short of a leash, or is the failure of Dungeons & Dragons an early warning sign for Star Wars?

The key will likely come down to the financial health of Star Wars gaming fans, who may already be tapped out after X-Wing, an LCG, and an RPG, not to mention the upcoming Empire vs Rebellion card game and Armada epic-scale wargame. Imperial Assault will definitely sell, but will it sell enough to warrant this ambitious venture? Only the business minds at Fantasy Flight know the answer to that question, and it likely rests on a few variables. 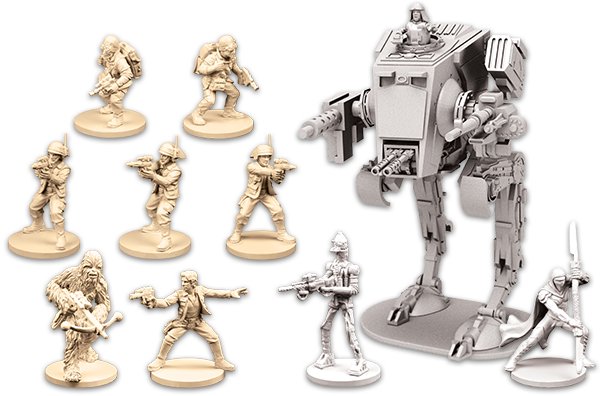 Developing one hit game is difficult enough, but two is a major challenge. Assuming this drives up the cost of development, FFG will have to work harder to cover these costs in sales. If both games gain big followings, will there be enough product to go around? Or on the other hand, if one game tanks, will the remaining audience be left to foot the bill? The terms of FFG’s Star Wars license are also unknown, so it can’t be said at what additional cost (if any) the production of Imperial Assault is being conducted.

There are a few things in FFG’s favor, though. The publisher is experiencing record growth on the backs of runaway hits X-Wing and Android: Netrunner. This is the cherry on top of 25% year-over-year revenue growth, according to FFG’s “In-Flight Report” presentation at Gen Con 2014, so the publisher is absolutely poised to take a big risk. Also, Imperial Assault might be the missing piece among FFG’s Star Wars game portfolio, as it is the only pure board game among the bunch.

Lastly, let’s not forgot that Star Wars is about to gain major pop culture traction in the coming months, with Episode VII on the way, and a wave of additional television and film content to follow. This is coming at a time when mass retail operations are beginning to embrace tabletop gaming (X-Wing can be found at both Barnes & Noble and Target), so the upside for Imperial Assault is a full-blown mass market hit.

Given the wait until the game hits store shelves (early 2015), the well-oiled Fantasy Flight marketing machine is sure to continue revealing info on this game. In the meantime, it’ll be up to us to read the tea leaves and see whether Imperial Assault will be the Next Big Thing or a game without an audience.