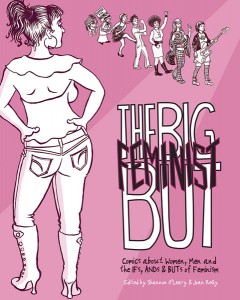 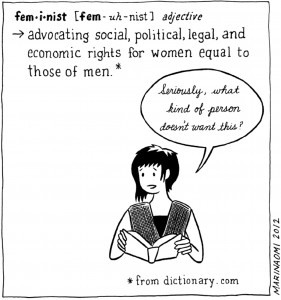 That’s the definition of feminist shown in the earliest pages of The Big Feminist BUT: Comics about Women, Men, and the IFs, ANDs & BUTs of Feminism. It’s an anthology of comics editted by Shannon O’Leary and Joan Reilly that includes the works of any number of talented creators like Gabrielle Bell, Shaenon K. Garrity, Josh Neufeld, Jeffrey Brown, MK Reed and a host of others. The topic, of course, is feminism. But beyond that, the creators were allowed to basically do and say whatever they wanted on that topic. To no surprise, there are quite a few different approaches, styles and themes in the book.

As O’Leary points out in her introduction, “feminism” is a loaded word with all sorts of political connotations harkening back to Gloria Steinem style activism from the 1960s and ’70s. But that was decades ago. There have been social advances since then, both in the form of actual legislation as well as cultural mores. So that Second Wave Feminism isn’t really appropriate in the 21st century. O’Leary also points out that Third Wave Feminism hasn’t really sprung up yet, though she feels is about due.

That’s where readers are going into the book. It’s not a manifesto or a call to arms, just “dispatches from the shadows of that second backlash.” All these creators getting together just to say where they think things stand today. It’s not a book that tries to convert people to one way of thinking or another—several of the stories almost contradict one another—it’s just people providing their viewpoints.

As such, there’s a wide range of material. Bell, for example, got a bit of attention when, in a somewhat tired and tipsy state, she promised to adapt The Scum Manifesto for this book. She felt later felt trapped into doing that because of the attention, but found it wasn’t saying what she felt. And so her story here is how she didn’t adapt Valerie Solanas’ very polarizing book.

Corinne Mucha worried about becoming a spinster, until she redefined what spinster might actually be. Justin Hall turned in a story about how he officiated a gay wedding in San Francisco dressed in a Green Lantern costume. Dylan Williams wrote a mostly wordless piece set in 1936 about the near-invisibility of a female janitor in an office building. Sarah Oleksky talked about finding a hero in Skådi, Norse Goddess of Winter. Lisa Ullmann questioned whether having children was something she actually wanted, or was a script that she was playing to. 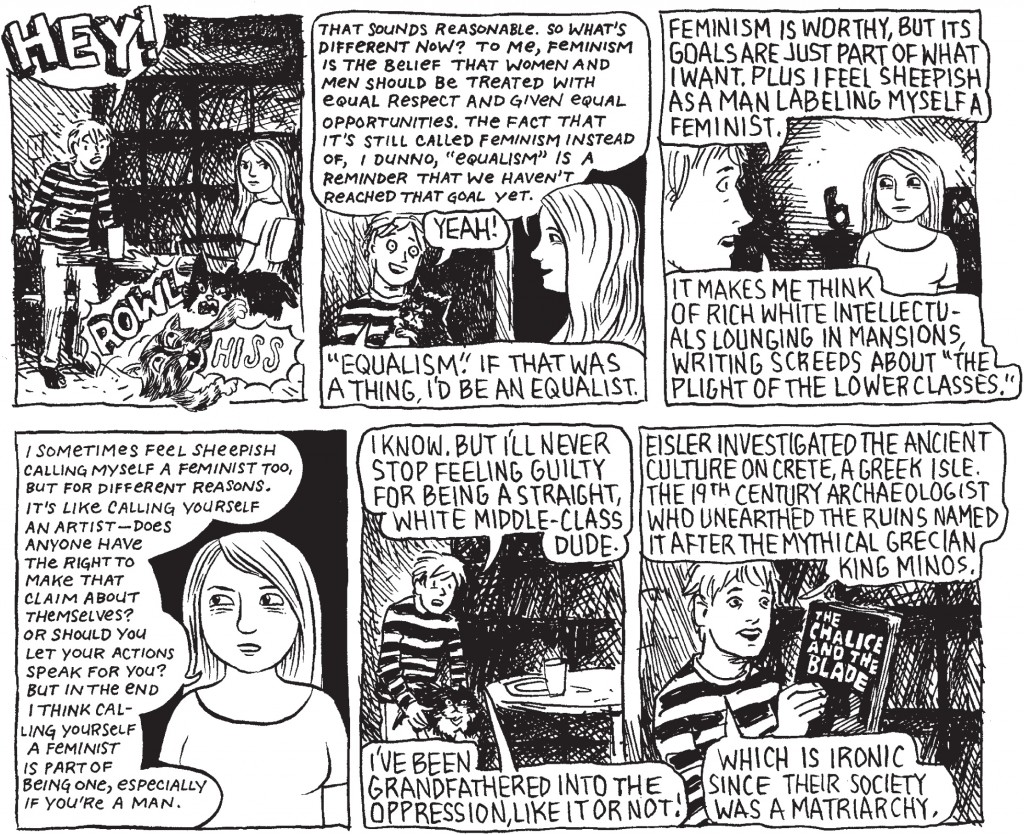 Like any anthology, the individual stories are of varying qualities, and will no doubt appeal to different people in different ways. There’s a wide range of art styles and story types. But that just reflects feminism in 2014. There’s no one way to view feminism right now, and none of the approaches are any more or less valid than any others. But I think that’s one of the great strengths of this book: that no matter where you’re coming from, you’re bound to find an idea or two in here that are surprising or unexpected. And while none of the stories are preachy—many, in fact, are quite the opposite—you could easily find yourself considering some alternative points of view.

The original publication of this book was in 2013, but that was independently published by O’Leary and Reilly so it had a pretty select distribution. But a second edition is being published by Alternative Comics on April 16 that will be widely distributed to bookstores and comic shops. It includes more comics than the original and a new afterward by Noah Berlatsky. The original is a sharp book if you come across it, but the Alternative edition only improves on it.

The Big Feminist BUT
8Overall Score