Frustration and anger can wear down any man, even if that man is the Batman. And with the criminal mastermind known as Bane playing a long con from behind the walls of Arkham Asylum, the Dark Knight is struggling to convince even his staunchest of allies like Police Commissioner Gordon of his certitude of Bane’s machinations. 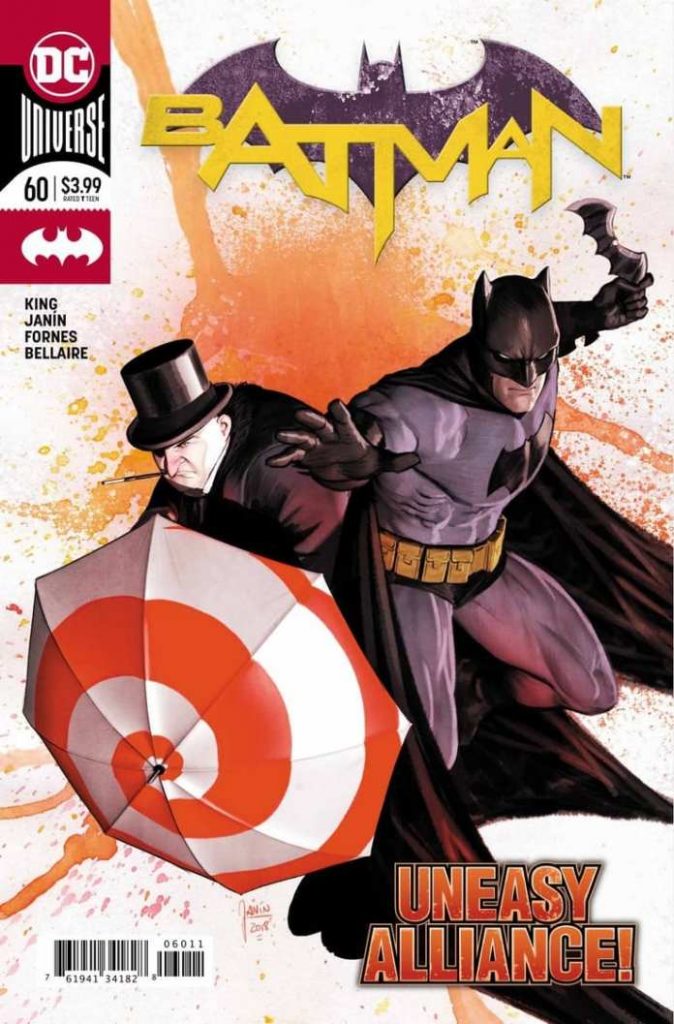 That’s what it’s so unnerving to see the Caped Crusader lash out so desperately in every direction in Batman #60, part 3 of “The Tyrant Wing,” on sale now from DC Comics. The creative team of writer Tom King, artists Mikel Janin and Jorge Fornes, colorist Jordie Bellaire, and letterer Clayton Cowles follows Bruce Wayne as Batman as he shakes down every villain in Gotham City–on the loose or on parole–looking for confirmation that Bane is indeed in his right mind and not the mentally broken shell of his former self he presents to the outside world. 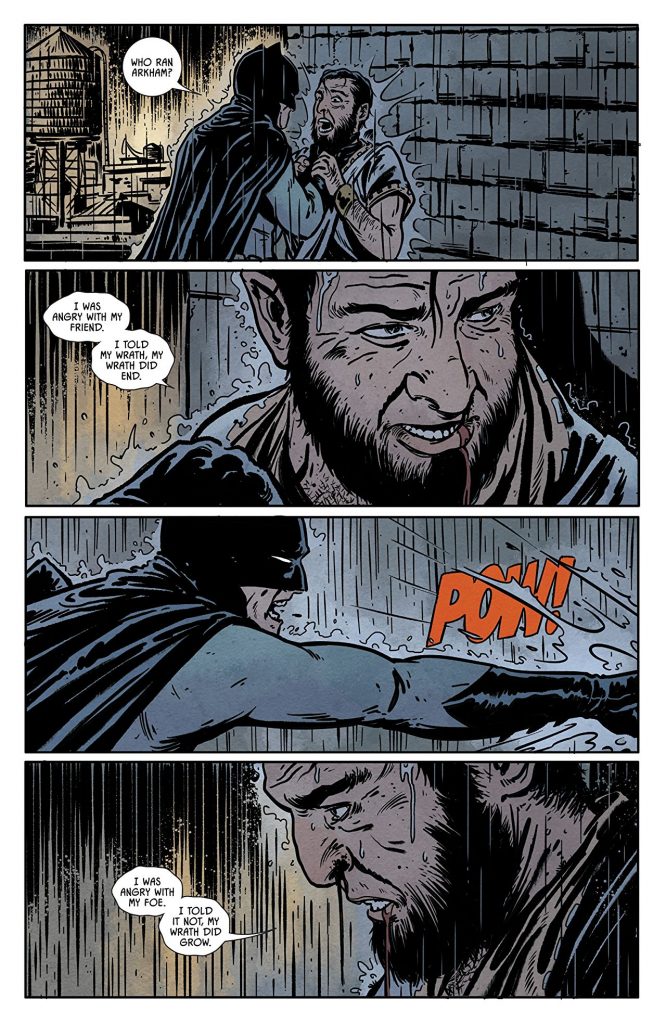 “Shakes down” is putting it mildly; Batman’s methods are bordering brutality, with every foe from Maxie Zeus to Kite Man feeling the Dark Knight’s wrath when he doesn’t get the affirmation he’s looking for. This gives even Gordon pause–already reeling from Batman hitting him in anger and frustration last issue–leaving him bewildered and questioning his former ally. Meanwhile, Alfred watches over the Penguin–who turned coat against Bane–only to get an unexpected and unwelcome visitor at the issue’s end. That visitor has popped up earlier in King’s run and may be a game-changer in the whole run.

In a broader sense, though, this installment represents a drastic course change, whether Batman knows it or not, because of the fallout of last issue and the Dark Knight’s behavior in this one. Gordon can no longer look away at Bruce’s behavior, after hitting him and brutalizing criminals. Via Bane, King has taken away one of Batman’s surrogate father figures, which will have reverberations for quite some time. In fact, King uses this entire issue to examine the emotions of father figures: Bruce is acting with fury, in part, because of what he sees as Bane’s role in the shooting of Batman’s surrogate son Nightwing. Gordon destroys the Bat-signal out of anger and frustration with Batman, who straddles the line of fraternal and paternal friendship. Penguin eulogizes his poor daughter throughout the latter part of the book. And he and Alfred–Bruce’s adoptive father–are beaten by an alternate reality version of Batman’s biological father, who is also dressed as the Dark Knight. Much of King’s narrative is about how fathers view their children and what they’re willing to do for them, and King plays it well. 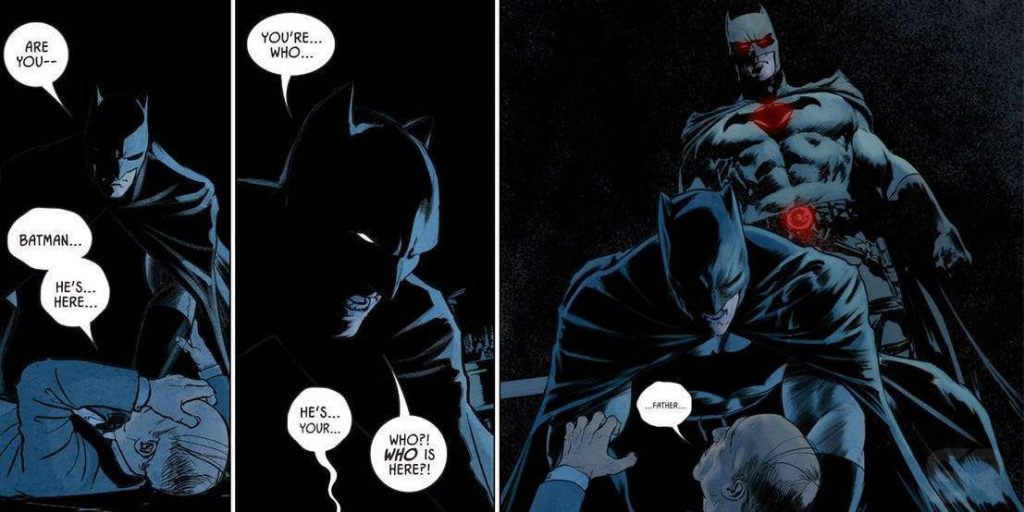 Janin and Fornes play with that passion King is building perfectly, alternating between Janin’s scenes with Alfred and the Penguin in the Batcave and Gordon at the Gotham City Police Department and Fornes focusing on Bruce’s interrogation of his rogues gallery. Fornes’ moments with Batman and folks like Firefly are downright uncomfortable and filled with ferocity, and they’re meant to be. I found myself yelling at the villains to tell Bruce what he wants to know, also while knowing from the resigned fear in their body language that wasn’t happening. These moments pair beautifully juxtaposed with the quiet tension Janin is building. The back-and-forth between Alfred and Penguin is too calm for there not to be an explosive end, which comes in the form of a lurking Thomas Wayne. Meanwhile, Janin gives Gordon a barely-contained anger that has no place to go but out by the climax of the issue. Janin and Fornes help in making the issue emotionally exhausting–and that’s meant in the best way possible. 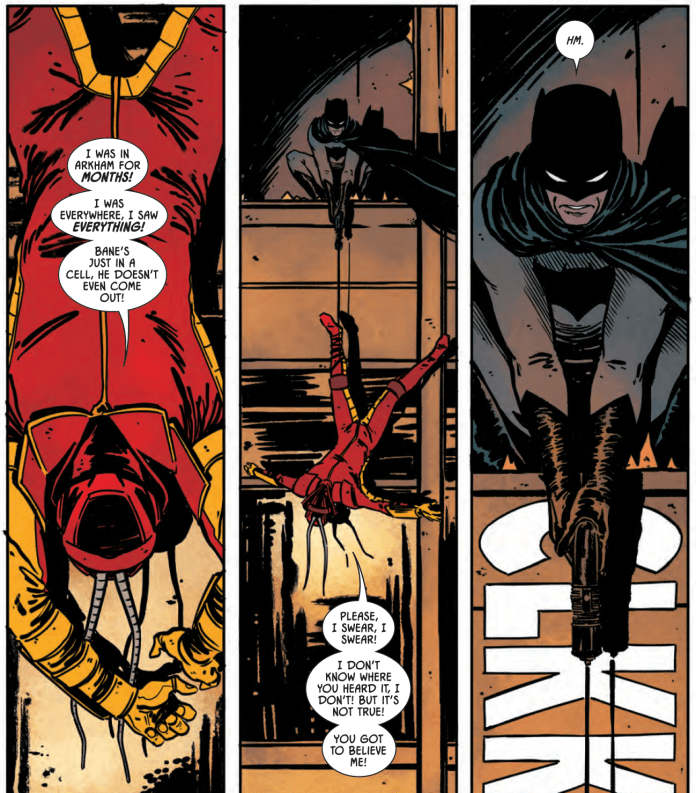 This is no small part thanks to Bellaire, who uses the shadows that come with a Batman to highlight the murkiness in everyone’s feelings throughout the issue. Her color choices even seen different when she partners with Fornes’ pages, feeling almost darker and muddier as if to echo the moral line Bruce is straddling while going on this brutal crusade across Gotham. It’s another example of Bellaire’s sharpness and knowledge of color and why she continues to be one of the best comic creators in the medium. Cowles has a chance to play this issue with his lettering with the various rooftop scenes of fighting and fisticuffs, particularly when villains are in peril. None feel out of place or in the way of the action at any point; rather, they augment and highlight tense scenes with even greater intensity every step of the way. 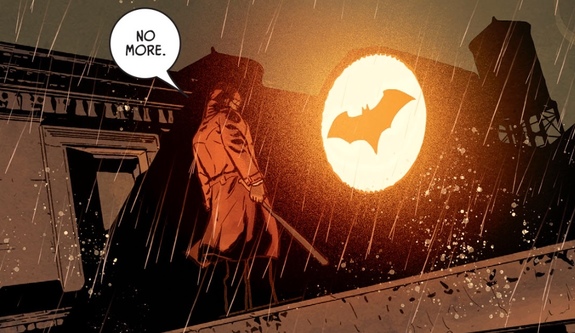 What is a man’s breaking point? Creators over the years have examined the Dark Knight and questioned what his breaking point is, with King and the whole team on Batman perhaps being the most surgical and methodical. However, before Bruce can catch his breath from the threat of one assault, another is thrown at his feet from left field. While we don’t know if the Caped Crusader will have a point of no return, it’s certainly been gripping watching what King and company lob at Batman along the way.

Batman #60 is on sale now from DC Comics.

Batman takes on a new partner, and it’s…the Penguin? After rejecting Bane’s crime-boss co-op, Cobblepot finds himself in the crosshairs of some very teed-off villains. The feathered felon turns to his old foe to snitch on Bane’s scheme, but has to prove his intentions to avoid a Bat-beatdown. Along the way, this Gotham odd couple begins to bond—could there be a new bird joining the Bat-Family? Not if Bane has anything to say about it…