Duke Thomas’ life has never been particularly one with calm waters, especially lately. Whether contending with the reality of his parents poisoning with Joker toxin, trying to be accepted into the Batman’s extended family of fellow crimefighters, or adjusting to his emerging metahuman superpowers, Duke’s strong resolves is put to the test.

However, Batman believes in Duke and his abilities, so much so that he has entrusted Duke to be Gotham City’s daytime protector as the superhero The Signal, patrolling the city when Bruce Wayne cannot. In DC Comics’ miniseries Batman and the Signal, we follow Duke on his first shift as Gotham’s sunlight guardian, smack in the middle of a mystery involving new metahumans possibly causing trouble for the city.

With issue 2 in stores now, we spoke recently with miniseries cowriter Tony Patrick about where we find Duke Thomas at this point in the miniseries, how he’s helping build a new hero from the ground up, and how his work with teens informs his approach to writing the characters in the comic. 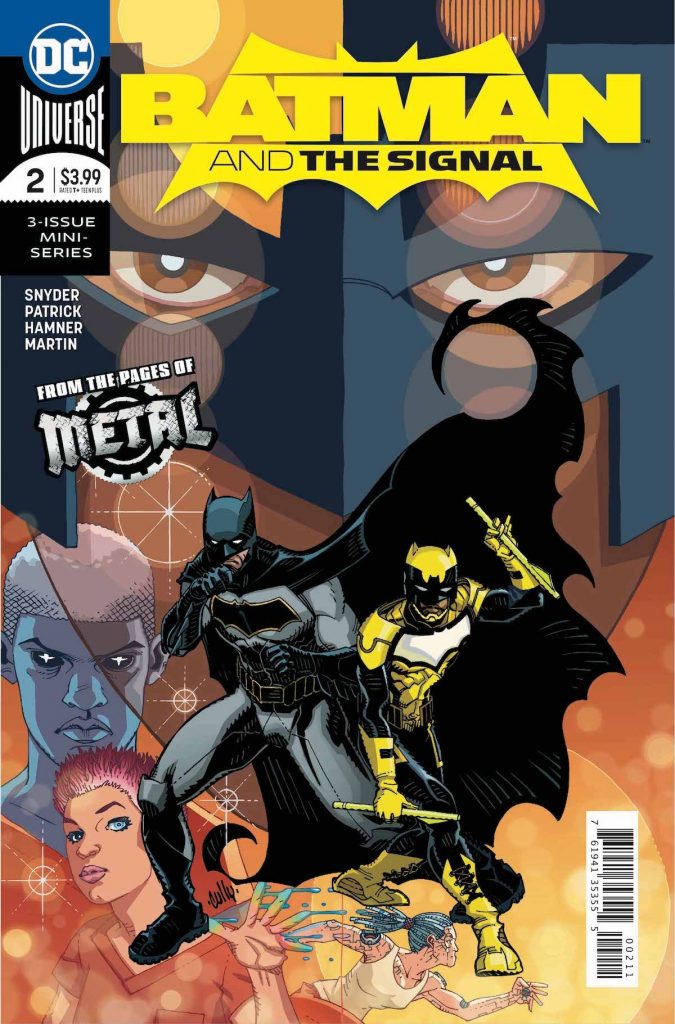 FreakSugar: For folks who are just coming into the miniseries, where do we find Duke Thomas at the beginning of Batman and the Signal #2?

Tony Patrick: If you haven’t had the chance to read issue 1, we start in Arkham Juvenile Center for Youth. We have the Signal battling a new trio of metahumans in the Narrows. We’re working hard to get to this emerging mystery of emerging metas in the Narrows. We’re looking at Duke’s role in regards to these new metas. And we’re just a few hours in on Duke’s first dayshift as the Signal. So that’s where we begin in issue 2.

FS: We see Duke fighting the trio of metahumans in the beginning of issue 2. We’ve seen Duke in other books such as We Are Robin and in the Batman books on his own as a crimefighter before, but now he’s officially the Signal, has his outlook changed how he approaches crimefighting?

TP: I think so. We’re also talking about Duke operating in a solo capacity, at least during this miniseries.  We’re talking about him fighting in broad daylight. So I think he’s approach is different than in previous issues that Duke has been included. But I also think because this is his first day as the Signal, it’s a culmination of his training, everything he’s learned, everything he’s experienced, and now taking on this role as Gotham City’s daytime protector. He’s on his lonesome with support of Izzy and Riko as well. But I definitely think his perspective is evolving. Not only is he an African American teen who’s been shouldered with Batman’s daytime emissary and protector—not just the Narrows, but all of Gotham during the daytime. Going from an autonomous Robin and a group of autonomous Robins, to working with Batman in All-Star Batman, to being the Signal, there’s definitely a shift in perspective. That comes from more responsibility? 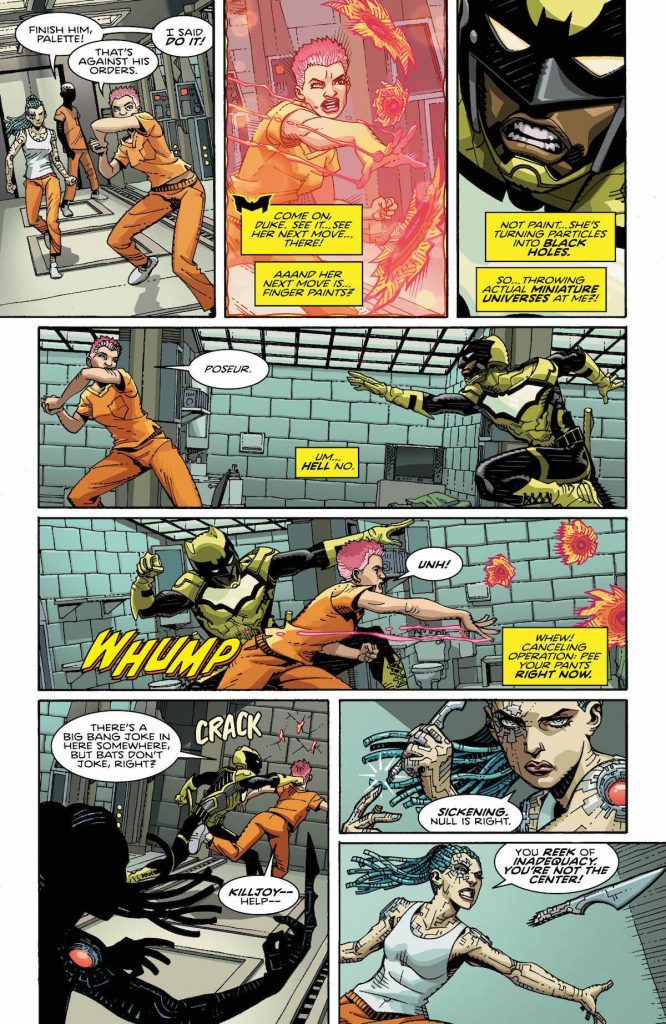 FS: We’ve seen how Batman has interacted with different Robins over the years. This feels like a shift in his perspective, too.

TP: Definitely. Batman has had all these experiences with past Robins. He’s a character who is continually evolving. He’s aware of his own blindspots. He’s aware of his own failures and successes. The Signal is his opportunity to do something new. That’s what he says to Duke. It’s his opportunity to get on the ground floor in working with a metahuman that is part of the Bat-family.

We’re talking, again, about Batman shouldering with someone to do things in the daytime that he might not even have time for, as he’s Bruce Wayne during the day. So, yes, Batman also shares an expanding perspective when it comes to protecting Gotham.

FS: We see midway through issue 2 Izzy and Riko, Duke’s former We Are Robin teammates and field support in the miniseries, having a difference in opinion in how to help Duke and how Duke approaches his role. Do you think they’re both right?

TP: [laughs] I think they’re voicing the inner conflict that Duke faces from time to time. Duke is on the trajectory of becoming his own hero. He’s not there to become another Batman, which I don’t think is Batman’s intention, either. However, he has been trained by Batman and there is value to working in the shadows, especially in Gotham.

So as a daytime emissary, yes, Duke is his own person. But I think there is always a conflict that a member faces. “Could I be the next Batman?” “Could I be Gotham’s next protector?” “How much of Bruce’s training can I utilize in my own trajectory?”

Are they both right to a certain degree? I think so, and I think there’s a stalemate. With the sandbox I have the opportunity to play in is, like Batman, to get on the ground floor of a new hero. I think anyone who has been reading Batman stories in the past few years has watched Duke Thomas evolve over the years into his own hero. He has the intelligence and strength and determination to become one of the greats. The Signal may one day be part of the Justice League. Who knows? I think there’s a lot to play with here.

FS: When you approaching creating new characters, be they heroes or villains, how do you tailor them to the story and your own narrative sensibilities?

TP: One of the things I do when I’m not working in comics or in the writing process, I work with a group of teenage high school students. I have a gaming/world building imitative for kids of color and underprivileged kids who don’t have access to gaming companies, comic companies, or emerging tech companies or what have you.

For me, the process becomes a little bit personal because I am working with the next generation of heroes, of game designers and esport professionals and artists and startup entrepreneurs. Like I said, these are kids who need mentorship and guidance, and are headed to college. When I think of the kids from Arkham Juvie, there are kids who might have a stigma attached to them or have been cast in a negative light to prove themselves.  You can go either direction. Will they become the next Superman, Batman, and Wonder Woman, or are they destined to become the next Joker and Harley?

That’s how real-world encounters make their way into my work. When it comes to Duke/The Signal, I had an emotional moment when thinking about him. We have a kid who’s really doing a juggling act, particularly during this miniseries and his first shift. You’re talking about an African American teen who has a girlfriend, high school, his former teammates, being trained by Batman, trying to fit in to a Bat-family, and having parents who are still alive and infected with Joker toxins and trying to figure out a cure for them. That’s a lot. [laughs] When you think of it that way, this kid is strong, he’s tough, he’s intelligent, and he’s shouldering a lot. Yet, he’s persevering and that’s an exciting character to write.

Batman and the Signal #2, written by Tony Patrick and Scott Snyder with Cully Hamner on art, is on sale now from DC Comics.

As Bruce Wayne fulfills his corporate duties at Wayne Industries, Duke Thomas (a.k.a. the Signal) embraces his role as Gotham City’s daytime protector while battling a deadly new rogues gallery. Could these teenage villains be connected to the recent metahuman population boom in the Narrows? To find out, the Signal must learn to work with a different kind of ally…the GCPD!