The past few days, it feels like you can’t throw a billy-club without hitting a new bit of news about what’s going on with small screen comic book adaptations. (Why would we be throwing a billy-club? I don’t know. Why are you always trying to trip me up in front of my friends, Dad?!) Let’s take a gander at the announcements coming out of DC Entertainment and Marvel Studios the past couple of days.

As we reported back in the summer, TNT (the drama-knowing folks) greenlit a pilot based on DC Comics’ Teen Titans franchise. While we knew that former Robin-turned-Nightwing would be a headliner, there weren’t any details eked out as to which Titans would be joining Batman’s former Boy Wonder. Yesterday, TNT announced the female-heavy roster who would be joining Dick Grayson. Oracle—the former Batgirl—as well as Raven, Starfire, Hawk, and Dove would are rounding out the superhero series’ cast.

I’m pretty jazzed, as Nightwing and Barbara Gordon are two of my favorite superfolk and, remarkably, two of the most well-adjusted heroes, especially considering that their mentor was spooky-pants-anger-issues Batman. Fans of Teen Titans Go will probably be hooked in from seeing Starfire and Raven who, when written correctly, are really interesting characters. While Hawk and Dove are not the most well-known Titans, the show will hopefully shed some attention on the C-list duo. No surprise that Titan Cyborg won’t be involved, as his character is already tied up in the Justice League movie franchise, although I do hope we get to see Beast Boy should the series be picked up for a full season.

Marvel wanted to remind us that the Hell’s Kitchen hero Daredevil would be hitting Netflix next month, as it released a teaser clip for a teaser today. While the full teaser will be released tomorrow, we do get a voiceover from who we presume is Matt Murdock, ol’ hornhead himself, rasping that he wants to protect his city. I have to say again that the black costume Matt is decked out in reminds me of the character’s appearance in TV movie The Trial of the Incredible Hulk every time I see it.

As we mentioned last fall, the DC Comics/Vertigo comic book series Lucifer, focusing on the Lightbringing devil himself as he settles into life on Earth, had been optioned for a put pilot by Fox, meaning it would air regardless of what happens behind the scenes. Bleeding Cool is reporting that the pilot has been officially greenlit and it’s a go to move forward. The source material will presumably borrow from the works of writers Mike Carey and Neil Gaiman, who both put their marks on the character. Their stories ranged from the mundane to the esoteric, so it’ll be interesting to see which bits that Fox will pull from as they put together a pilot (and hopefully a series?). Maybe they’ll follow NBC’s moves they have taken so far with Constantine, plucking parts from here and there from key comic book storylines.

Remember Heroes? Yeah, you remember Heroes: decent NBC series that went off the rails after the first season. That Heroes. Well, NBC is planning on reviving that world of characters in its reboot Heroes Reborn, which will bring in Zachary Levi of Chuck fame into the fold. The 18-second trailer that ran during the Super Bowl on Sunday didn’t reveal much other than meaningful looks and Northern Lights. Heroes was a bit of a welcome novelty when it first aired, but with its lackluster following seasons and five years since the original series ended might have people shrugging at the prospect of watching new adventures of HRG and company. We’ll see.

The casting for A.K.A. Jessica Jones, another Marvel Netflix series, continues, as it adds an actress familiar with superhero fare. Carrie-Anne Moss, who played human freedom fighter Trinity in the Matrix trilogy of films, has been added to the cast in an unnamed role. This comes on the heels of last week’s casting announcements of David Tennant’s role as Killgrave the Purple Man and Rachael Taylor as Patsy Walker. While this is all wild speculation, of course, as we don’t know which character Moss will portray, I could see her playing either Jessica Drew or Julia Carpenter, both whom have taken the moniker of Spider-Woman in the past and appeared in the comic book source material for the show, Alias.

Fox’s Gotham has been surprisingly and consistently good TV. However, one complaint I’ve heard on the Interwebs, a complaint that I share, is that the show keeps stuffing in Batman villain after Batman villain into the show, and the first season hasn’t even concluded. So far, we’ve got a glimpse at a young Selina Kyle, who’ll one day become Catwoman; Edward Nygma, the future Riddler; the Penguin; Boss Falcone; Dr. Jonathan Crane, who will turn villainous as the fear-mongering Scarecrow. Today, Fox announced that a nod to the Joker will appear in the February 23rd episode of the series. The connection comes in the form of the Red Hood Gang, a group of criminals which James Gordon and Harvey Bullock will be investigating. In multiple origins of the Joker, the clown prince has been shown to have a connection to the Red Hood Gang in some form or another. Depending on how this is pulled off, this could either be a great checkmark for the series or it could feel shoehorned in the name of fan service. We’ll look back at it once the episode airs. 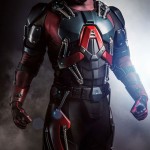 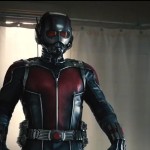 The CW released its first look at Brandon Routh as Ray Palmer decked out in his costume as The Atom. We’ll get a glimpse of The Atom in action in February 25’s Arrow episode “Nanda Parbat.” While the face visor makes Routh look like he stepped out of a bad 1980s sci-fi flick, I’m digging the rest of the costume, although I think I’m still a bigger fan of Paul Rudd’s Ant-Man duds. For my money, thought, the best shrinking hero was John C. McGinley as The Atom on Justice League Unlimited. The dude brings his A-game to every role he touches.