ALIEN: Isolation’s mixture of methodical pacing, coupled with brilliant atmospheric touches, envelops you into its world. When you let go and allow it to take you on its ride, you’ll have one of the best and scary experience to date.

Hey kids, are you ready for the latest licensed video game based on a movie franchise? Oh boy, what fun we’ll have! Surely nothing can possibly go with such titans of quality from Hollywood and… uh, Game-y…ville…burg backing this project. So lets go down to the videogamemart and procure this item that will change our lives forever!

I’m pretty sure this has never been said because nearly all of these types of games – you know, the quick buck that screams “Dear lord, we have a movie coming out and it most definitely needs a bump from all media outlets to ensure maximum prophet!” – are universally terrible. Usually, it’s a result of poorly sheduled, underfunded, and overworked developers who sobbingly agreed to make such a game lest they waive* their next meal goodbye.

*NOTE: Waive is technically correct and works on both levels. That’s Lit 101, Bitch

However, the nigh-impossible has been accomplished. I’m happy to say that Alien: Isolation is pretty damn good. Indeed, very damn good. Mostly.

Story wise, I’ll go out on a limb and say that this is the true horror sequel that Alien deserves. I have a massive love for Aliens but let me be clear, it’s an action movie through and through. It also demotes the xenomorph into bullet chowder. Alien 3 tried to go back but it was never the same. Everything else should be forgotten entirely.

It’s 15 years after the loss of the Nostromo and Ellen Ripley’s alien encounter. Here, you star as her daughter, Amanda Ripley, who works for the Weyland-Yutani company as her mother. The Company has been notified that Nostromo‘s flight data has been found and is brokering an exchange with Seegson, another space exploration firm. They task a crew, along with Amanda, to seal the deal. Of course shit hits the fan and, during their boarding procedure, Amanda’s crew gets separated on the massive Sevastopol station. What they don’t know is that this station has become a hunting ground for a familiar foe.

So why should you care about what looks like another FPS roller coaster theme park horror that is somehow a sequel to a movie from well over 30 years ago? For one, the devs – Creative Assembly – have nailed, absolutely nailed, the feel and tone of that 1979 horror classic Alien. From the whir of the automatic doors to the chunky 70’s future-tech, monotone glow of CRTs Alien: Isolation is wet with atmosphere. CA has done their homework and have aced all the tests in the design department. Whoever is in charge of that team gets a hearty toast from me. Perfection. The care and attention to detail is simply staggering. I don’t want to gush so much but I’m going to anyway. 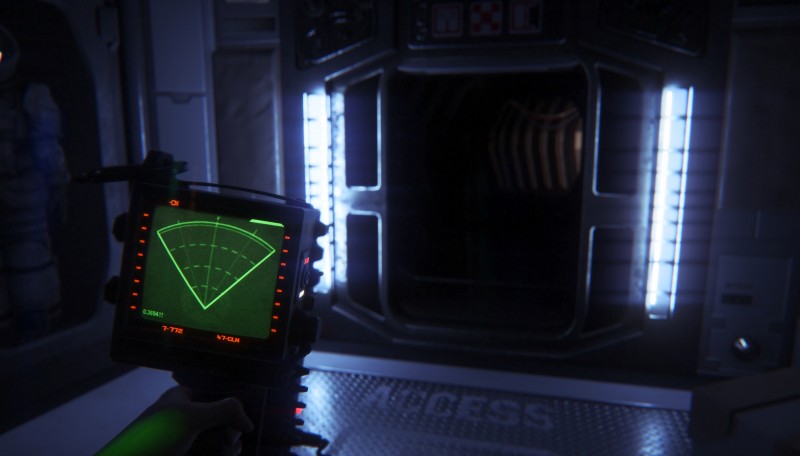 When you first boot up Alien: Isolation you can tell this was passion project. And somewhat of a proving point over the abortion that was the previous Alien game, Colonial Marines – the less said about this one the better. But Isolation is devoted to getting everything right visually. Beyond the expected low-rent, 70’s version of the “future” that embraces everything Alien, we’re treated to some clever use of visual and audio elements to heighten the sense of dread. Mist rolls in as the doors open or you trigger the atmosphere clearance by hacking a fusebox. The alien – xenomorph, whatever – has some very graceful animations. If you’re in the right spot – or maybe the wrong one – you can catch a glimpse of that classic un-pretzeling motion it does when descending from above. All around the look of the game should be heralded as the best example of a “movie” game.

Horror games often live and die by what you hear – and can’t see. You can’t always have monsters screaming in your face and the best scares come from within your mind. What you think may lurk around the bend will have you questioning your next move. You’ll hear the xeno pounding away in the ventilation shafts inches above your head – swiftly chasing where it thinks you are. Then suddenly it’ll be a little too quite – except the pitch perfect pulsing tone of your motion detector. Some of the most tense moments come from hearing the rapidly beating beeps and seeing the little green blob darting closer and closer. Other times, you’re hiding in a vent or locker, while the alien methodically paces around trying to sniff you out. You can actually feel its breath from how it sounds through the headphones (you’re playing on headphones there is no question, you are) dripping in anticipation for the kill.

I don’t know how many times I’ve jumped because the vents’ aperture portal hisses open and I thought it was the monster.

As for the rest of the bells and whistles, Alien: Isolation does a fine job keeping things minimalist. VO is decent with some pretty good voice work from the actors. Occasionally, you’ll hear an odd inflection here or there but it’s nothing to cry over. 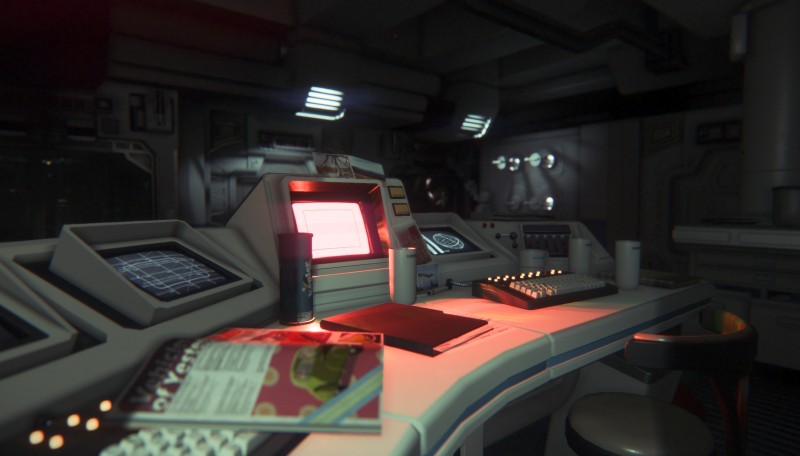 Where Alien: Isolation gets the feel of the franchise spot on it can get a bit video game-y. Which is expected. The hacking tool is neat but one of the minigames seems out of place. You have to adjust to the right frequency with the left stick and the hit buttons rhythmically. The other hacking game is a little better tasking you to match up a sequence of symbols. Some of the mechanics aren’t explained properly – such as diverting power to various sources. You’ll find hackable fuse boxes in which you can shut down some systems, like cameras, and power others. Somehow it can be used to distract, like turn on the speakers to make some noise in another room to enable a stealthy escape, but I feel that it’s very underused and not completely necessary. Really, they’re fine for what the are and struggling to hack a locked door while the alien hunts you down is quite exhilarating. In fact, you’re never really safe as the only respite from getting viciously murder is the map screen, everything else is handled in real time.

I also hope you like hiding in a box for minutes at a time. Alien: Isolation plays up the stealth. It’s an FPS horror game so of course you’ll have a lot of down time waiting for enemies to pass. While most of the other foes, the rampant androids and paranoid humans, stick to a routine of sorts, the alien is virtually unscripted. This means that it can and will pop out at anytime – which is great. What’s not great is when it decides to pace to and fro forcing you to wait it out. It can be a bit overlong sometimes. While unnerving, after a while, you’ll just want to move on. You are given a few options by crafting items such as pipe bombs or noisemakers to distract it, but they can’t always be reliable.

Also, the saving mechanic might turn a few heads. Frankly I loved it because it added an extra layer of intensity. Basically, saving takes a few seconds so if you’re caught using the save-phone, you’re dead. Also, you only get two slots and there is no autosave. Not even as an option. I get what the designers wanted to accomplish, but feel that it can be frustrating to some players. Better to have the option between the two so you’re not reliving the same mistakes over and over. Also, the game doesn’t have a save layer over the various collectibles. It just would have been nice to at least say, “hey, you fucked up but, that thing you found, we’ve got your back”.

Overall, Alien: Isolation shines best when all the mechanics work in sync. It’s hard enough to get horror right in video games. I’ve mentioned before that being startled isn’t the same as being afraid. This game “gets it” with smart pacing without constantly poking at you going “Hey look at this scary thing!”. While the video game contrivances might knock you out of the reality of what’s going on, along with the need to keep Ripley constantly in danger again and again that it almost becomes laughable, Isolation‘s mixture of methodical pacing, coupled with brilliant atmospheric touches, envelops you into its world. When you let go and allow it to take you on its ride, you’ll have one of the best and scary experience to date.

Review: ALIEN: ISOLATION
ALIEN: ISOLATION has exceeded my expectation of what the Alien franchise can be for video games. Through excellent use of atmosphere due to brilliant audio/visual quality matched up with tense and very frightening situations, this game is perhaps the true sequel to Ridley Scott's Alien. While the story and video game contrivances can be a bit overwrought and may turn away some players, the faithful will find a tight and fun - if flatline-inducing - horror game that will have them hiding under their sheets.
8Overall Score
Reader Rating: (2 Votes)
8.9