The relationship between the mighty Thor and his father, the All-Father Odin, has always been fraught with strife, and that sometimes barely contained-resentment comes to a head in Thor #10, on sale now from Marvel Comics. In Thor #10—written by Jason Aaron, art by Mike Del Mundo, colors by Del Mundo and Marco d’Alfonso, and lettered by Joe Sabino—the thunder god comes back to the wreckage of Old Asgard for a new hammer to fight off Malekith and the coming War of the Realms, only to find Odin surly and wallowing in booze and self-pity and anger. 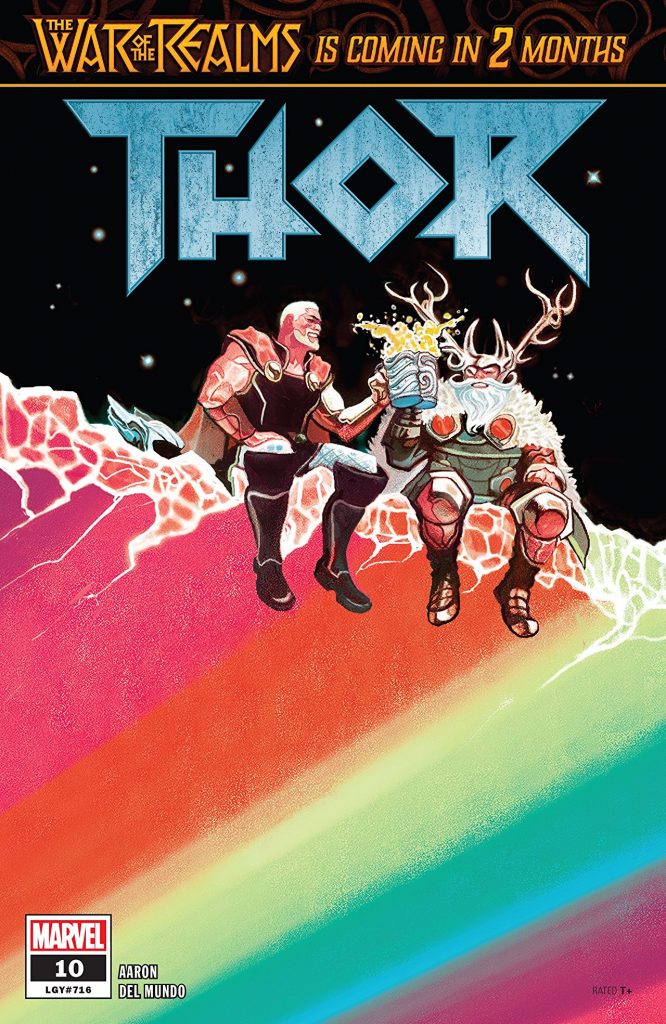 However, while Odin outwardly directs his anger toward Thor, his thoughts damn himself, as he reflects on how much he loves his son and the mistakes he made with Thor as a father. That doesn’t stop the two from coming to blows, however, and millennia of resentment and frustration bubble to the surface in an explosion of blood and stone: Thor frustrated at Odin for inaction against Malekith, Odin frustrated with himself. Meanwhile, Loki deals with his birth father’s own disappointment in him in a truly Loki fashion.

The installment emotionally hurts to read, but can’t be put away. Aaron gets to the base of who Odin and Thor are in their dynamic with one another in a way that’s raw and revealing, surprising readers with layers we haven’t seen before, even after all these years. Aaron’s plot and dialogue is all-the-more augmented by the art and lettering, which shows the duo’s argument—both in words and action—barely being contained on the page. The entire team is stressing just how much of a powder keg such resentment can be, and the action will leave you holding your breath. 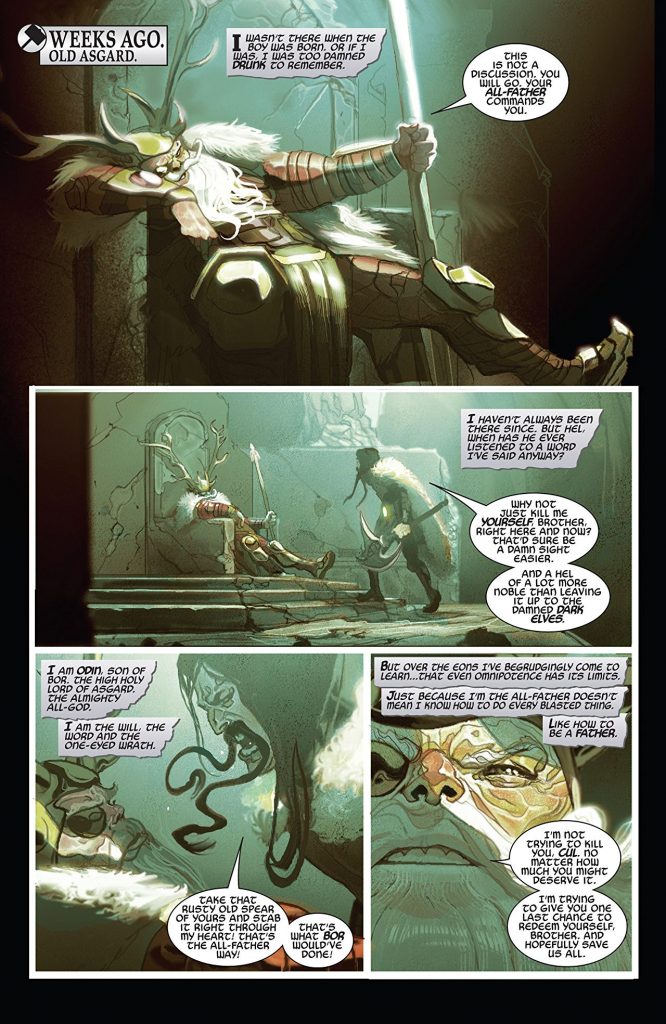 Thor #10 is an achingly beautiful, heartbreaking tale of attempting to bridge the divide of years of familial conflict, words that can’t be taken back, and words that were never said. The All-Father will have to find out how to mend fences and heal old emotional wounds if he wants both to repair his relationship with his son and pull himself out of despair long enough to stave off the threat of Malekith. The whole creative team make us reel from Thor and Odin’s relationship and still keep us asking for more.

ALL-FATHER ODIN, FATHER OF RUIN! For months, the realms have burned with the flames of Malekith’s war, while Almighty Odin did nothing. Now, Asgardia is lost in the sun, the Rainbow Bridge is shattered and the All-Father sits alone in the empty ruins of Old Asgard, drunk on mead and despair. If Odin is going to save what’s left of the realms, he’ll have to undertake the most difficult labor of his very long life. Not by being the omnipotent All-Father, but by finally being just a father to the mighty Thor.