I’ve been watching some eclectic stuff for you people for this month’s Blu-ray the Hard Way. Killer gyms, sexually confused killers, Jack freaking Palance as Dracula. What the hell is going on with my movie stack?

This month, Gorgon Video releases the oddball horror film Death Spa to Blu, while Scream Factory gives Sleepaway Camp an HD upgrade; a pair of sequels to Cronenberg’s Scanners remind us that the 90’s were a very exciting period for synthesizers, exploding heads, and kickboxing and 47 Ronin is just… well, it’s just a goddamned mess. 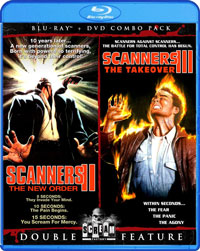 The Scanners franchise continued to make money for director David Cronenberg years after his first movie, spawning a pair of semi-direct sequels as well as the spinoff Scanner Cop films. The pair of 1991 films directed by Christian Duguay (Screamers, The Art of War) are squarely in the “not-bad-for-what-they-are” territory, giving us another couple of hours of head-exploding espers terrorizing the streets of Montreal.

Apparently, shot back-to-back (before that was a thing), it’s a quick slide into crazy camp by the time the second sequel rolls around. The first concerns itself with vet student David (David Hewlett), the orphaned son of Stephen Lack and Jennifer O’Neil’s characters from the first film and an inheritor of their Scanner abilities. He’s drafted into a war on crime by the city’s shady police chief before his conscience gets the better of him, putting David at war with Canada’s not-so-courteous law enforcement and mad scientist-types.

You could charitably describe The New Order as “serious” inasmuch as it doesn’t have a supervillainess bent on Canadian domination. You can’t say the same for Scanners III: The Takedown, which is filled with more incident (and enjoyable enough nonsense) as Liliana Komorowska’s rogue Scanner begins amassing a small army to take over her father’s company (and anything else that she sees).

Shout! Factory presents the two films on the same disc, allowing for a perfectly serviceable picture and zero special features. 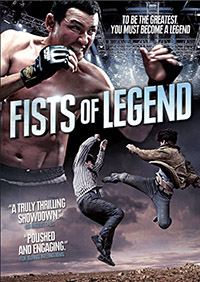 I’d normally be suspicious of a movie that uses a Nu-Metal cover of “Eye of the Tiger” as its anthem, but director Kang Woo-Suk’s (Public Enemy 3) has a little more on its mind than tough guy posturing even as nice guy restaurant owner Kyu-Min (Hwang Jung-Min) attempts to get over his middle aged slump with a little mixed martial arts.

Flashing back to his days as an Olympic boxing hopeful while Kyu-Min climbs the ladder of an amateur fighting show that gives the film its title, Fists of Legend offers a surprising amount of heart for a movie about men over 40 trying to pummel each others’ heads in. Thematically, there’s a lot here about how being a badass carries the weight of being someone who hurts other people as Kyu-Min and a pair of his estranged high school friends (Yu Jun-Sang, Yoon Je-Moon) struggle to get their respective shit together as competitors in the same tournament.

Visually and aurally CJ Entertainment’s disc is top-notch although the option English-language track is pretty awful. The special features are slim, with a short making of doc joining a quick look at the recording of the soundtrack, a photoshoot for the film’s poster, and footage from the film’s premiere. 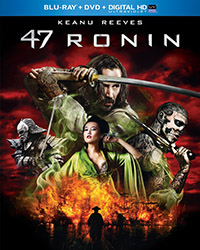 I have a much longer review of 47 Ronin in my head but it would draw more attention to this inert and culturally gross film, which sees a band of samurai out to avenge the forced seppuku of their master.

Drawing inspiration from the Japanese folk tale of the same name, director Carl Rinsch’s production drops a listless Keanu Reeves in among a band of Japanese actors who you’ll largely forget because 118 minutes isn’t really enough time to get to know 50+ characters. Kai’s halfbreed character is a reminder that in Hollywood, it’s still better to be half-white than all anything else, and he’s the axis around which the story turns as he co-leads the rebellion against Tadanobu Asano’s (Thor, Ichi the Killer) eeeevil lord.

Come for the shitty VFX, stay for the awkward English-language line reading from a cast of Japanese character actors who deserve better.

The special features are strictly electronic press kit stuff, including a short doc about Keanu and his character, a look at the film’s fights, and an FX highlights doc. 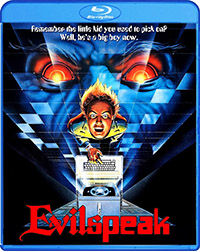 Evilspeak is one of two discs this month that blends PCs and the supernatural, although it’s hard to say which is more successful. Or “successful,” even, given the relative quality of its competitor, Death Spa.

Clint Howard plays much-abused military school cadet Stanley Coopersmith whose penchant for computers comes in handy when he discovers the lost writings of Spanish missionary and Satanist, Father Esteban (Richard Moll). The powers of Satan come in handy when you’ve got a book of evil and a computer to translate it for you. It’s bad until the last 20 minutes when it becomes bad but in a way that has Satanic pigs which is my kind of good, honestly.

Shout! Factory, as ever, puts together a nice disc and I’m probably going to spend a bit of time after this trying to get even better screencaps of the Carrie-esque carnage in the last act. Producer/Director Eric Weston offers an informative commentary while Clint Howard gets a solo look back at the film (he notes that one of the major challenges of the shoot was his thinning hairline) while co-stars Joseph Cortese, Haywood Nelson, Richard Moll, and Don Stark offer largely sunny memories about working on what would be for some of them, their only horror movie. 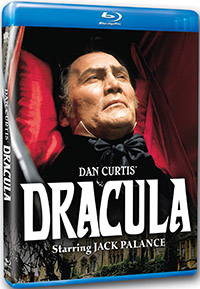 With his sharp cheekbones and built-in, theatrical menace, the late, great Jack Palance makes for an unconventional yet appealing Dracula. Sadly, longtime Dark Shadows writer Dan Curtis strands the actor in a movie that doesn’t deserve him, a fairly slow-moving and sedate reinterpretation of Stoker’s novel which can’t help but betray its TV origins.

Following the same arc as the source material with a script by Richard Matheson (I Am Legend), Curtis’ Dracula heads to London where he hopes to make a love connection with Lucy (Fiona Lewis) who bears a striking resemblance to his own lost love.

It’s hard to pinpoint what doesn’t work about the film save to say that Palance’s character is the only one with any real definition. Even Nigel Davenport’s Van Helsing lacks the fire or charisma of the vampire killers that have come before him, while the film lacks enough of the soap operatic excesses that kept Dark Shadows on the air for years.

Still, you can’t fault MPI’s lovely disc which is rich in detail in its transfer. A pair of short interviews with actor Jack Palance and director Curtis offer very little background on the film, although it’s interesting to hear Palance describe this as one of the few characters in his repertoire that actually scares him. The disc also includes outtakes, a trailer, and TV versus theatrical cut comparisons for some of the gorier scenes. 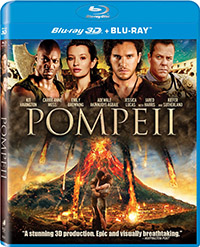 I like to joke that I’m a Paul W.S. Anderson apologist, but typically what I mean by that is the director makes competent, largely entertaining films that don’t strain at being anything more than that. This Vulture interview confirms everything I’ve suspected about the man in that he doesn’t know what art is, but he knows what audiences like.

Consider his latest, which could be broadly described as “Titanic, if Jack and Rose had to escape a volcano and Kiefer Sutherland.” Leads Kit Harington (Game of Thrones) and Emily Browning (Sucker Punch) are the kind of next-level attractive and self-serious to make the proceedings – well, not plausible, but functional. Anderson shoots several energetic gladiator fights and the ample effects work when that Vesuvius blows its top meshes well with the 3D.

An Anderson disc is always packed with features and this one from Sony is no different, offering a commentary from the director, six separate production docs and 20 deleted scenes. 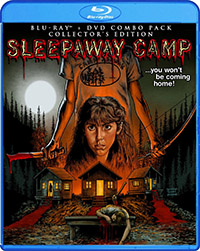 Scream Factory’s disc seems to be an almost direct answer to the problematic 2002 Anchor Bay DVD release. That disc – included as part of the “Survival kit” box set – used dodgy source materials for a less-than-great transfer. The new Blu release carries over what did work (the original commentary with writer/director Rober Hiltzik along with star Felissa Rose), along with their own bonus features, including an all-new commentary track over a gorgeous transfer of the early slasher.

The upstate New York-set film follows cousins Angela (Rose) and Ricky (Jonathan Tiersten) as a trip to camp gets bloody thanks to a silent, killer out to avenge poor Angela. Hiltzik’s off-kilter script is notable for its final scene twist, and the whole film is enlivened by performances that aren’t so much “good” as they are committed.

Even to this day, thanks to the new cast interviews and commentary, we can see that Tiersten and Rose still have a great deal of affection for the movie and each other. Rose in particular has a sweet moment tearing up when she recalls fans’ continued support of the movie. Besides the “Scrapbook” photo gallery and theatrical trailer, there’s a not-great short “Judy” from Sleepaway Camp superfan Jeff Hayes. 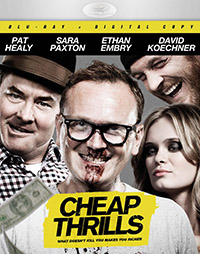 E.L. Katz, you made a damned fine movie. This dark comedy is kind of a spin on the old “Cutting Cards” episode of Tales from the Crypt where our two leads – down on his luck writer Craig (Pat Healy) and his estranged buddy Vince (Ethan Embry) – hack away at their dignity instead of their own limbs.

David Koechner (Anchorman) and Sara Paxton (The Innkeepers) round out the intimate cast as a pair of L.A. rich folks who’ve chosen to make a game out of paying Vince and Craig to debase themselves for increasingly large sums of money. Broadly, it has a lot in common with last year’s 13 Sins, but the intimacy of Vince and Craig’s games offer greater tension because the stakes are low enough to be relateable. You don’t know what you’d be willing to do for a million dollars, but if you needed $4,500 and someone was offering $10,000, you might be willing to make some hard choices.

Drafthouse Films’ disc features commentary from the director alongside star Pat Healy, a 45-minute making-of, footage of the film’s cast at Fantastic Fest, and trailers.

Disc of the Month 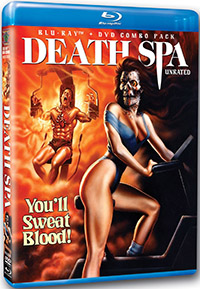 While Cheap Thrills was far and away the best movie of the lot, the Death Spa disc is at the top of the pile this month, if only because it’s a complete and total rediscovery of a film most people wouldn’t get a chance to see. It’s the kind of bad movie that’s imminently watchable, supplemented by a wealth of additional material that helps make some sense of how this movie about a haunted gym came to be.

This 1989 oddity, released from MPI Gorgon Video imprint sees the Star-Bodies Gym being attacked by the malevolent spirit of owner Michael’s (William Bumiller) dead but not so dearly-departed wife. The premise is what you might consider “high-tech” for the era, a kind of Chopping Mall riff (with a little bit of Carrie thrown in during the last act) substituting killer robots for murderous workout equipment being driven by a nightie-wearing ghost (Shari Shattuck) and her cross-dressing hacker brother (Merritt Butrick).

Ken Foree (Dawn of the Dead) shows up for some ill-advised horseplay and a genie costume while Rosalind Cash (The Omega Man) as a pissed-off cop doesn’t have time for your stupid haunted computers. Death by exercise equipment, murder by steam, throat-ripping by sushi, Death Spa has it all.

Thankfully we’ve got Gorgon’s 2K HD restoration which has a largely stable picture suffering from some minor noise here and there. The DVD and Blu-ray combo includes commentary from director Michael Fischa and a 50-minute making of with the cast and crew to tell us how a story about a lonely handyman ended up becoming a T&A-heavy gore flick set in a gym. Everyone seems to remember the experience of shooting low-budget Death Spa fondly, but they’re also keen to share a wealth of anecdotes about its twisty creation.