Valiant’s Ninjak is one of Valiant Entertainment’s most beloved comic characters, a fan favorite for the way that the concept straddles and blurs a variety of genres. In the newly relaunched series Ninja-K, writer Christos Gage–known for writing rough-and-tumble, sometimes-damaged characters–explores why Ninjak has trust issues and might not be the most well-adjusted operative to come out of MI-6’s “Ninja Programme.”

Mr. Gage spoke with me recently about where we find Ninjak at the beginning of Ninja-K, Mr. Gage’s influences, and how he makes nods to the character’s publication history. 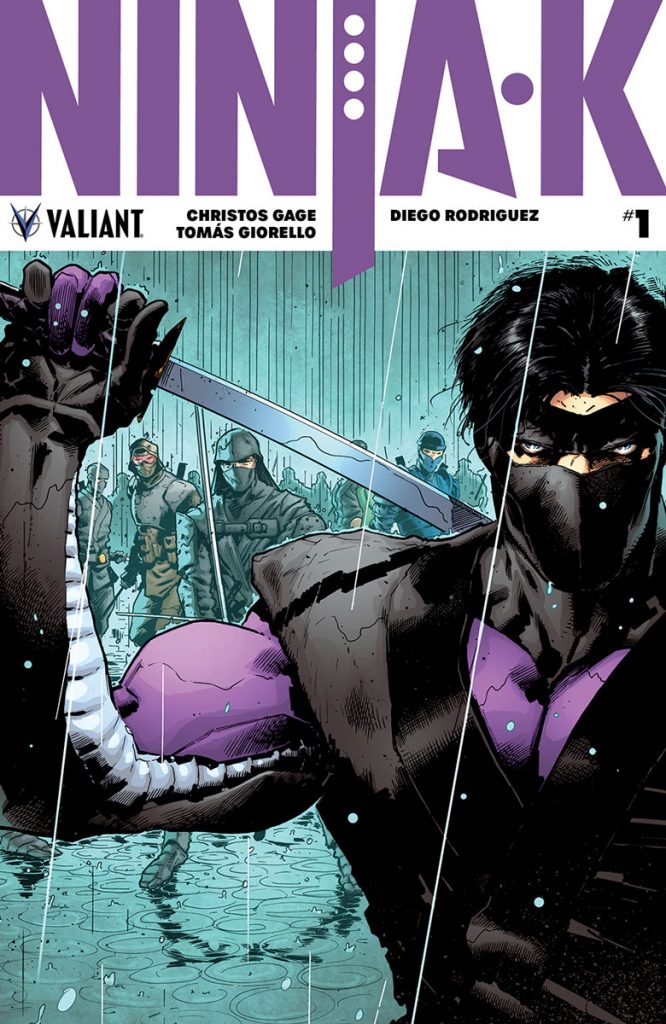 FreakSugar: For folks who are considering picking up the book, how would you describe the Ninjak character?

Christos Gage: The elevator pitch is, “What if James Bond were a ninja?” Obviously there’s more to Colin than that. He grew up with parents who were spies – double agents, in fact – and they were not the most well-adjusted people. So there’s a lot to his character. In some ways, the book is about a man trying not to make the mistakes his parents made while living a similar life. But “James Bond as a ninja” gets the point across! 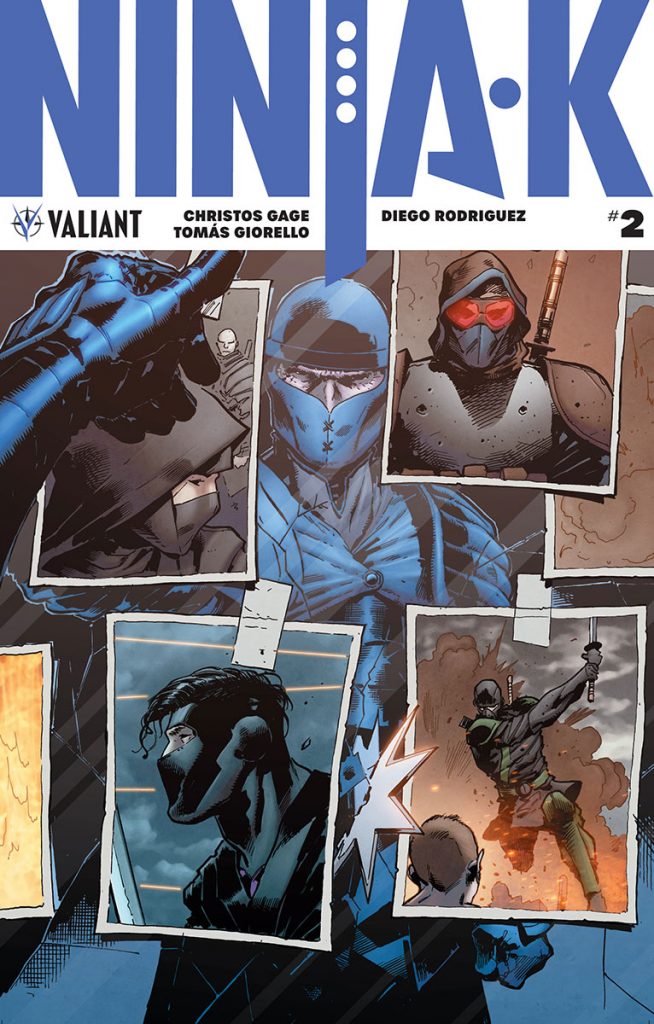 FS: Where do we find Ninjak at the beginning of the series?

CG: He learns that someone is killing people with a past involvement in the Ninja Programme he is a part of. As he investigates, he’s going to unearth dark secrets from the Programme’s past that have a significant bearing on his present. 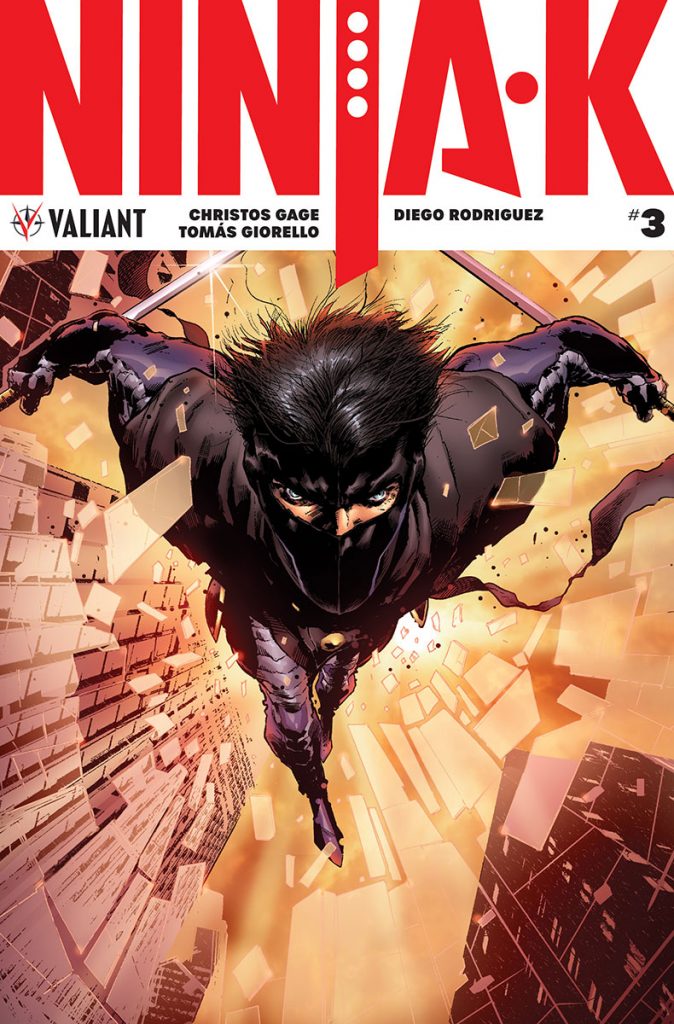 FS: The character of Ninjak and the Ninja Programme in general seem to share storytelling DNA from a number of traditions, in both literature and pop culture. What are some the influences that have shaped in part how you approach and create Ninjak’s character and world?

CG: Obviously the Bond stories, and for me there’s definitely an influence from comics like Master of Kung Fu, a masterpiece that’s underappreciated today, and Nick Fury, Agent of S.H.I.E.L.D., as well as Mike Grell’s Jon Sable, Freelance from the ‘80s. It runs the whole spectrum of super-spy fiction. 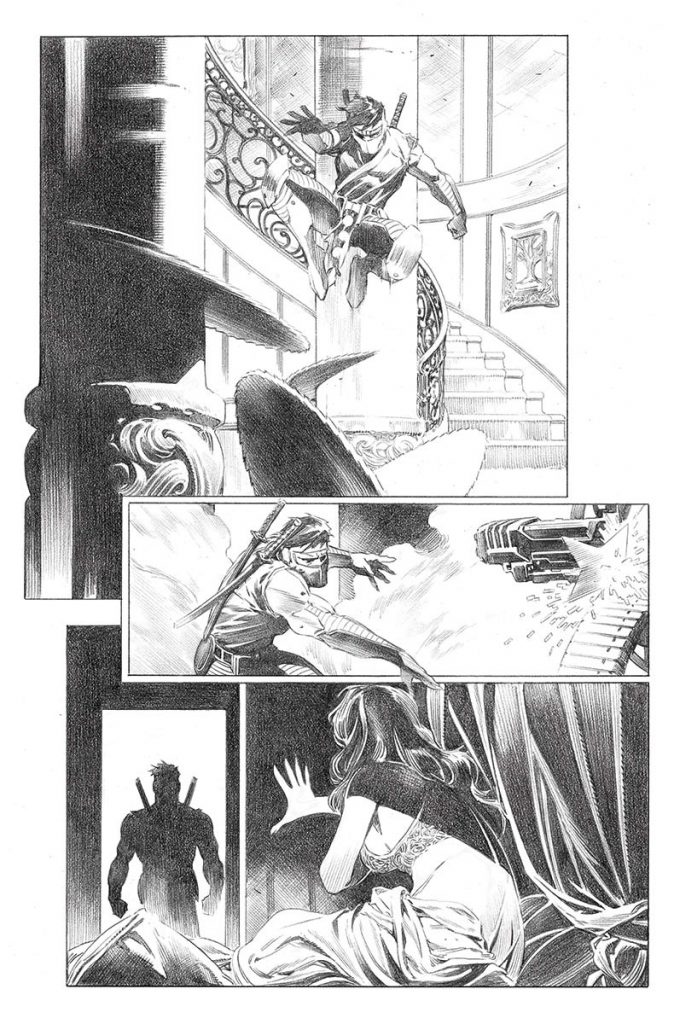 FS: The art is gorgeous and appropriately kinetic. What is the collaboration process like with Tomás Giorello?

CG: I write the scripts and then step back and watch Tomás and Diego Rodriguez (our colorist) work their magic! Seriously, they’re amazing. If Tomás has any questions, he emails me, but I’ve made it clear that I am fine with him handling the storytelling however he wants – he’s a master at it! Diego colors directly over Tomás’s pencils, which is something that doesn’t often work…but it does here. The styles aren’t necessarily the same, but the only other artist I’ve seen with this kind of “painting with a pencil” skill was the great Gene Colan. 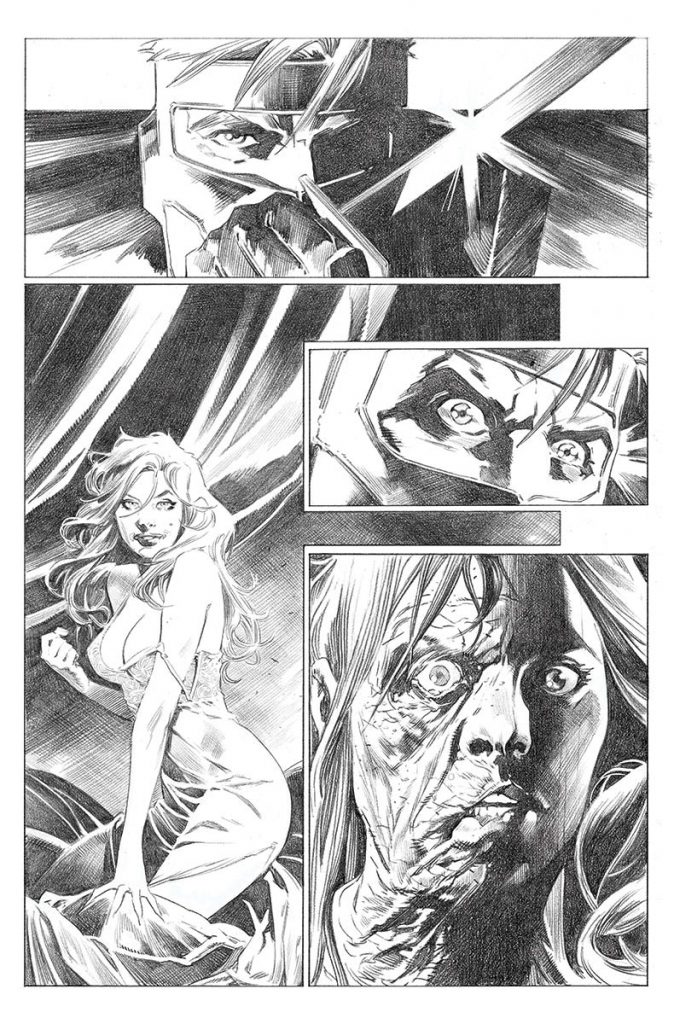 FS: I adore the use of narration blocks you’ve peppered throughout the book. Those blocks and narration bubbles are far too few in modern comics. What made you want to lean in to using that storytelling device?

CG: Well, it’s a convention of the genre – some kind of narration over action or subterfuge that would otherwise be silent given what the characters are doing. It’s also fun to try different types of storytelling, whether it’s direct narration, as in issue #1, or after-action reports, or whatever the case may be. I grew up with comics that had more narration than what we see today, so it’s fun to get to do a bit of that. And like I said, it’s a staple of the spy genre, the way first-person narration is for detective or private eye fiction. 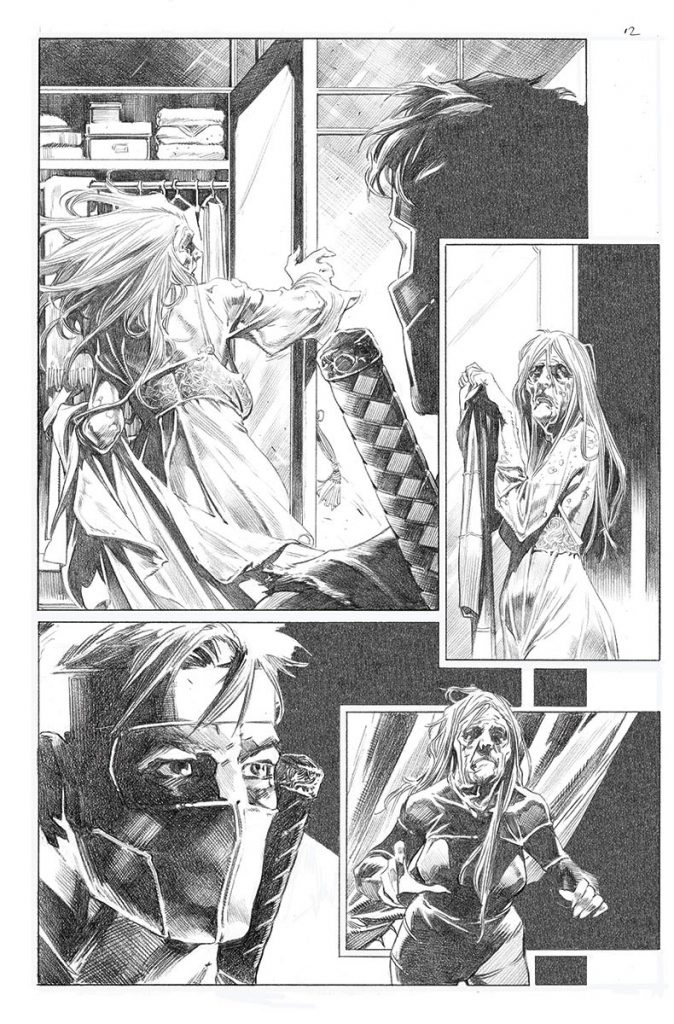 FS: Ninjak is a character in the Valiant pantheon who’s been around now for quite some time. How do you balance appealing to longtime fans of Ninjak in a series like this while also pulling in new readers?

CG: By honoring and building on what Matt Kindt and his collaborators did before – which I loved – while simultaneously telling a brand new story that anyone can jump into without any foreknowledge of the character. Just like how you can watch any James Bond movie without having seen the others, even though they sometimes refer to each other – that’s the approach we’re taking here. You’ll get all the information you need to follow the story. If you want to then go and read what came before, you’ll have a great time, and longtime fans will probably have a wider understanding of things, but there’s absolutely no need to have read anything else. 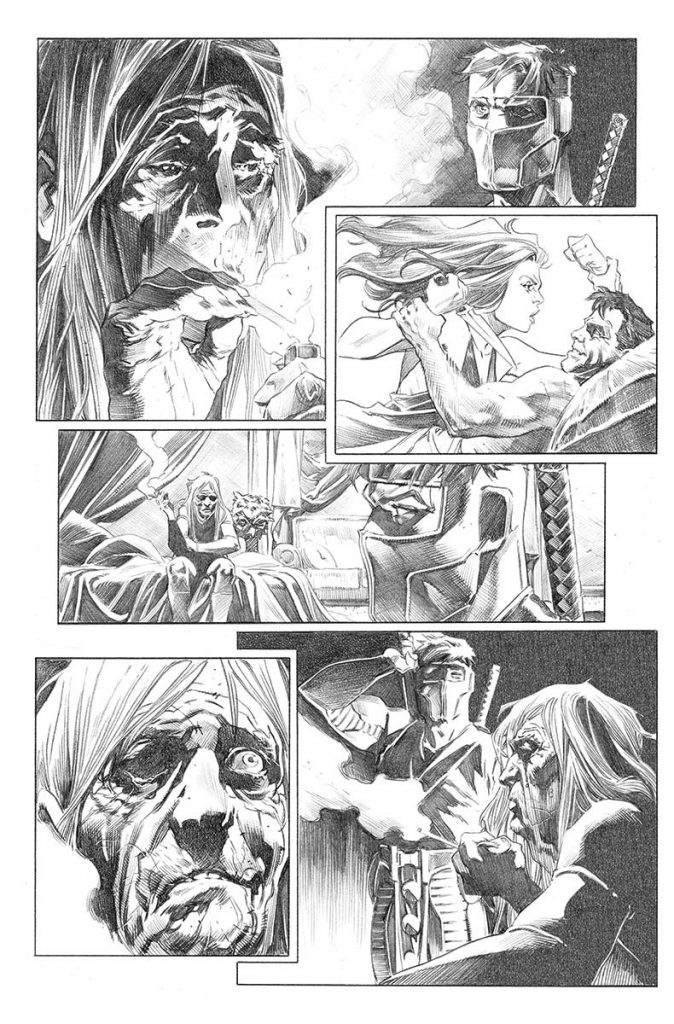 FS: While I wouldn’t quite call it alternate history, Ninja-K is peppered with moments in history that members of the Ninja Programme were part of, going back to the Great War. Is exploring the other ninjas in a historical context something you’d like to do down the line?

CG: Absolutely, and we will be. There’s a back-up story about Ninja-A in World War I that starts in issue #2, and in issue #4 we take a look at Ninja-G, the first black and first female ninja agent in the 1970s. And there’ll be more.

FS: Is there anything you can tease from the series moving forward?

CG: A lot of fans have asked if Ninjak will be interacting with the larger Valiant Universe. The answer is definitely yes. Again, we’ll make it new-reader friendly, but it’s too rich a world not to go there. 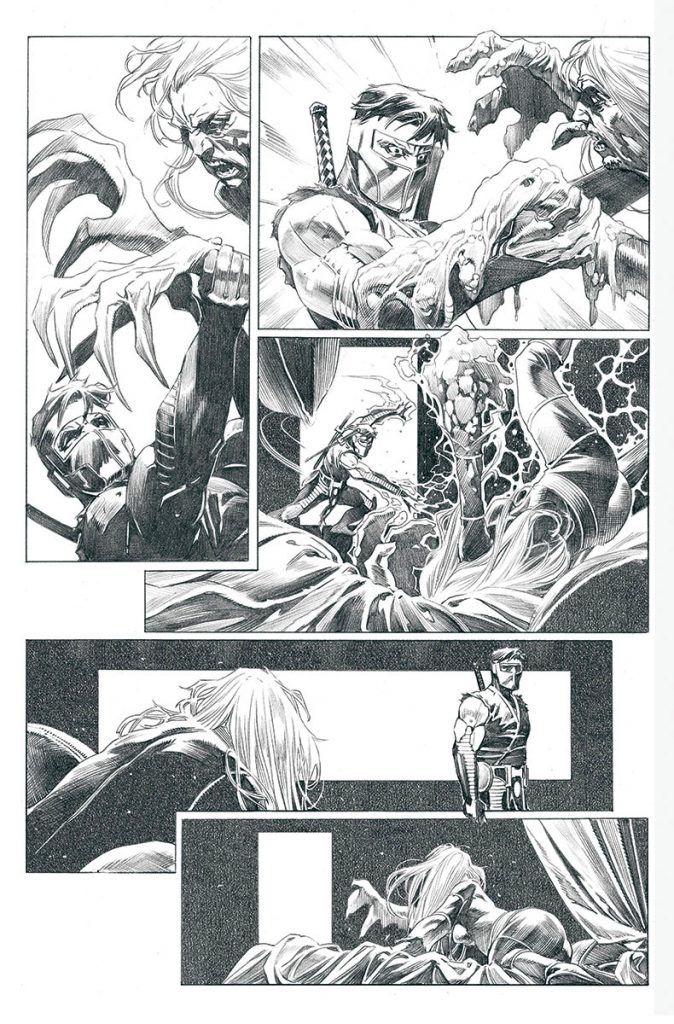 Ninja-K #2, written by Christos Gage with Tomás Giorello on art, is on sale now from Valiant Entertainment.

Who is hunting the agents of MI-6’s most elite intelligence unit?

One by one, the operatives of MI-6’s covert “Ninja Programme” are being murdered by an unseen threat that is as mysterious as it is deadly. But who could possibly have the knowledge and expertise to eliminate the lethal men and women of Britain’s most secret service…and why are they hellbent on reaping revenge against Colin King and his predecessors? As the walls close in around him, Ninjak must confront the bloodstained legacy that spawned him… before his own name gets crossed off the list…