With September upon us, our thoughts turn to autumn: crisp, cool air, pumpkin-spiced everything, and flesh-hungry werewolves. That’s right: it’s almost Halloween. As the beloved holiday approaches—and an opportunity to embrace all things macabre—Papercutz’s Super Genius imprint is publishing the first of three volumes of writer David Gallaher and artist Steve Ellis’ High Moon. Mixing elements of high action westerns and bone-chilling horror, their high-concept genre bending yarn follows a bounty hunter who has a monstrous secret he attempts to keep at bay.

On the occasion of tonight’s full moon, Mr. Gallaher spoke to me about the conceit of High Moon, collaborating with Mr. Ellis, and why our natural satellite continues to fascinate us. 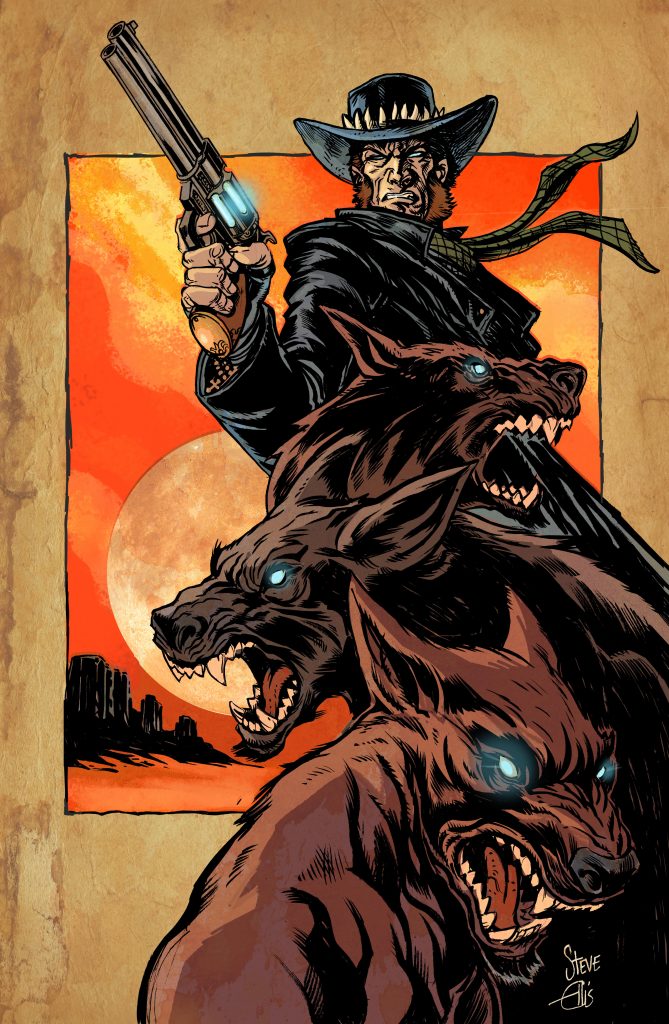 David Gallaher: Hight Moon is the story of a savage man in a savage time forced with a choice to live like a beast or die like a man. After some strange happenings are reported in a small Texas town, a supernatural detective, Matthew Macgregor is brought in to solve the mystery. The secrets he discovers uncover his own dark past — one steeped in witchcraft, murder, and mayhem. It’s a story filled with mythological creatures, steam engine golems, steampunk soldiers, and cowboys wrestling werewolves with their own hands.

FS: Steve Ellis is your collaborator on the story, as well as with The Only Living Boy. Does that collaboration process differ depending on which series you two are working on?

DG: Our collaboration is pretty similar for both projects, where things really differ are in the scripting.

Scripts for The Only Living Boy are pretty loose and quick. There have some dialogue notes, but it’s generally pretty fluid and light.  As an example, a typical script for four pages of art is about four pages of script. 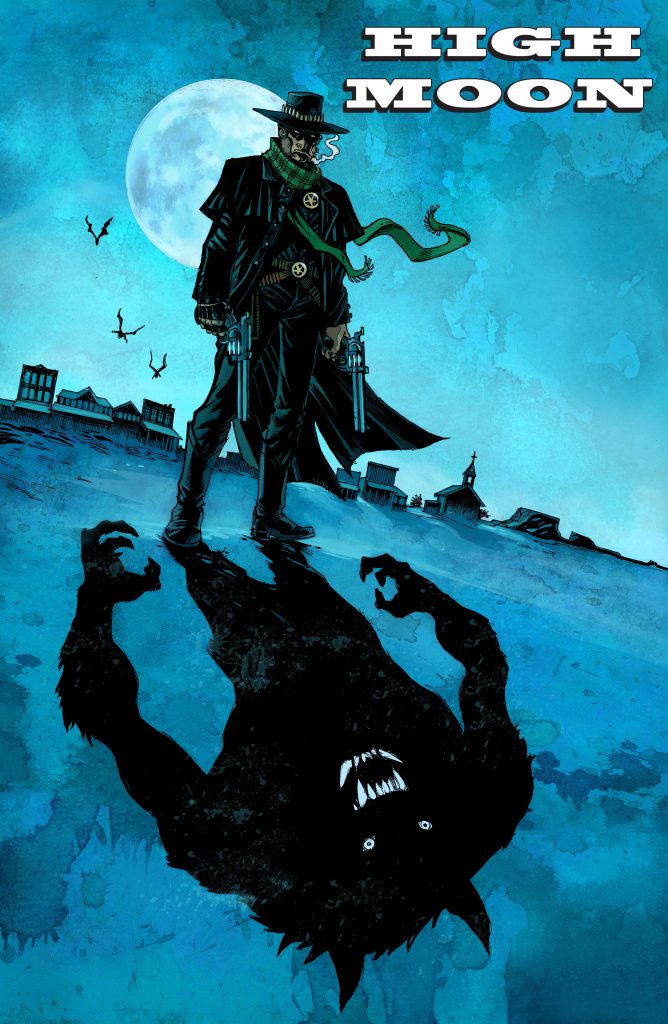 FS: Papercutz is re-releasing volume 1. What can readers expect in this re-release?

DG: The High Moon re-release is simply gorgeous. The book is 8.5×11, presented in landscape format. The art and lettering have both been remastered. It comes in this beautiful slipcase that is simply stunning, that allows the book to stand vertically on bookcases. It’s like a super fancy dust jacket. There’s some bonus material in the back… and some other goodies.

FS: Are there are werewolf or western stories that you find particularly inform your work?

DG: No, but yes. Let me explain. I was forbidden from watching horror movies as a kid, but there was one show — albeit short-lived — on Fox called Werewolf. I was never allowed to see it, but I saw plenty of ads for it. While it didn’t influence the storytelling on High Moon, the very idea that it existed did. Does that make sense? I never saw it, but my mind was captivated by it.

In terms of westerns, I was heavily influenced by John Meston and Norm MacDonald, the writers behind the Gunsmoke radio series. Neither of them particularly like phony cowboy stories, where the cowboy would come into town, strumming his guitar and saving the day. The brought an edge to their show that was mature, frustrating, sad, lonely, and profound. I’ve never heard or seen westerns as powerful. 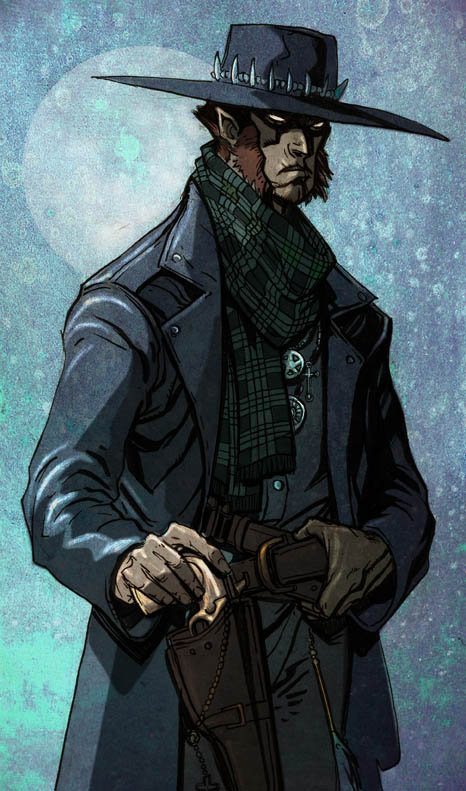 FS: This interview is being conducted on the cusp of a full moon. What do you think we continue to be fascinated with the moon and why it keeps cropping up in our stories?

DG: When I was a kid, I used to think the the Moon was God. At night, I used to talk to it. I thought that it used to watch over me while I slept. I didn’t understand anything about astrology or astronomy… I just knew that when I saw it that I felt safe.

I think we all have our own feelings on the moon and it’s presence on our lives for good or ill. For some it’s romantic, for others it is spooky. For centuries, it represented this power that was unexplainable and just out of our reach. There’s something magical about that.

FS: Can readers expect any more High Moon stories in the future?

DG: Yes. We will have some brand new stories starting in 2018… and between you and me, they are pretty awesome. After years of waiting, fans will get to read stories we’ve been waiting to tell for a decade. Can’t wait to tell them.

High Moon Volume 1: Bullet Holes and Bite Marks, written by David Gallaher with Steve Ellis on art, is on sale Tuesday, October 17th, from Papercutz. And be sure to check out tonight’s full moon!

Just in time for Halloween, Papercutz’s Super Genius imprint will publish the definitive edition of the first of three volumes of HIGH MOON, the acclaimed graphic novel series by writer David Gallaher and artist Steve Ellis. Originally published by DC’s Zuda Comics imprint in 2007 and the Winner of the Harvey Award for Best Online Series, HIGH MOON is a unique western and horror genre mash-up about the investigations of a mysterious bounty hunter, one whose own dark secret emerges every full moon. Or, as Molly Crabapple said, “With werewolves, gunslingers, and the sumptuous artwork of Steve Ellis, HIGH MOON will change everything you thought you knew about the Old West.”

Super Genius will publish HIGH MOON: BULLET HOLES AND BITE MARKS this October, followed by volume 2 in May of 2018 and volume 3 in Fall of 2018. For their release of HIGH MOON, Super Genius will remaster the existing art for Volumes One and Two, before concluding the story with all new material in Volume Three. All three graphic novels will feature new covers by artist and co-creator Steve Ellis, the storyboard artist and illustrator on AMC’s Breaking Bad (The Cost of Doing Business) and The Walking Dead (Dead Reckoning) games, and the co-creator of THE ONLY LIVING BOY graphic novel series, also written and co-created by Gallaher and published by Papercutz.

In HIGH MOON, former Pinkerton agent and current bounty-hunter Matthew Macgregor investigates a series of strange happenings in a small Texas town. Drought has brought famine and hardship to Blest. The summer heat pushes the temperature to unbearable heights during the day. The nights are even worse– for the streets are haunted by strange, unnatural creatures. And even as Macgregor works to uncover the truth about the creatures, he struggles to keep his own supernatural nature a secret.

The Super Genius editions will be larger than the previous Zuda Comics print edition and will present the landscape formatted series in a removable slipcase that allows it to be racked vertically, maximizing its visibility for retailers and consumers. All three volumes of HIGH MOON will be published in hardcover at $24.99 and simultaneously in paperback at $14.99. HIGH MOON: BULLET HOLES AND BITE MARKS  will be available in bookstores and comic book stores across the United States and Canada on October 17th, 2017.

Get ready to howl at the high moon.