In her LINE Webtoon series Fox Fires, Creator Emilia “Pipilia” Ojala has created a tale steeped in Finnish folklore that brings high energy and rollicking adventure to each chapter. Her art is a feast for the eyes, whether she’s rendering anthropomorphic animals or sprawling vistas bathed in light of night.

This month, readers of the series, new and old, will have the chance to get their hands on a print edition of the first stories of Fox Fires through a Kickstarter campaign that just launched through Rocketship. In honor of the launch of the Fox Fires Book 1 Kickstarter, Pipilia spoke with us about the conceit of Fox Fires, its connection to Finnish folklore, the campaign and what backers can expect, and what we’ll see in the webtoon series going forward. 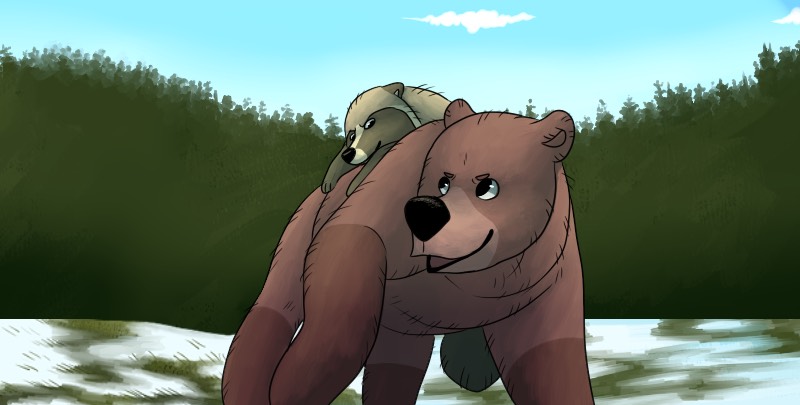 FreakSugar: For people who might not be familiar with Fox Fires, what can you tell us about the conceit of the series?

Emilia “Pipilia” Ojala: Fox Fires is a fantasy adventure comic, heavily inspired by Finnish folklore. It’s about a young raccoon dog and her quest to find out what has happened to Repo the fire fox. His flaming fur has been said to make the Fox Fires (or northern lights) appear to the sky, opening a gate between this world and the land of the dead. It allows the dead to visit their loved ones in this world. But suddenly they’ve stopped appearing.

The term “Fox Fires” comes from Finnish language, where the northern lights are called “revontulet” = repo’s fires (repo is a nickname for foxes). 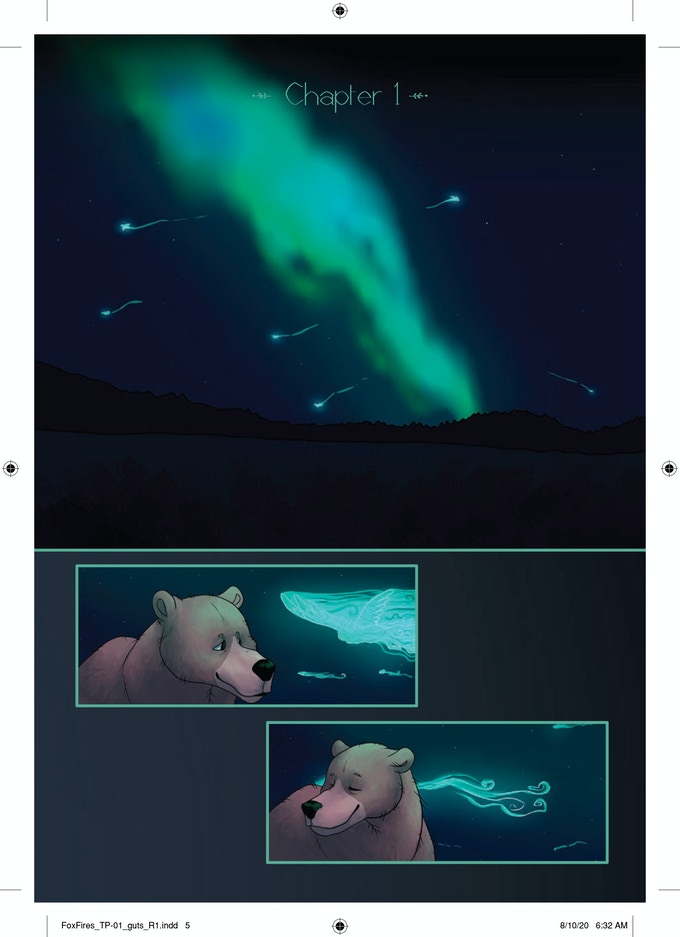 FS: What can you tell us about the cast of characters we meet in Fox Fires?

EPO: The main character is called Raate. She is a young raccoon dog/tanuki who is determined to solve this Fox Fires mystery. Raate is traveling to the North with a goal to find Repo the fire fox. Other animals often warn her about the dangers the North has to offer, but she doesn’t care. Something has to be done about this. She has lost her parents at a very young age and wants to meet them. But to do that, she needs the Fox Fires back.

Raate has been raised by a bear named Kaarna and a short-eared owl named Paju. Soon Kaarna gives birth to Otava, and he becomes Raate’s little brother. Otava and Raate have that typical sibling relationship; I think people with siblings can somewhat relate to them.

Other characters include Tuike, a magpie that knows a lot of things since he works directly for the forest elves. One of the elves we meet in the comic is named Valko. She can seem a bit scary at first, but does have a warm side to her. There’s also this one mysterious gray lynx who seems to appear and disappear from thin air. No one knows what his motives are or whose side he is on. 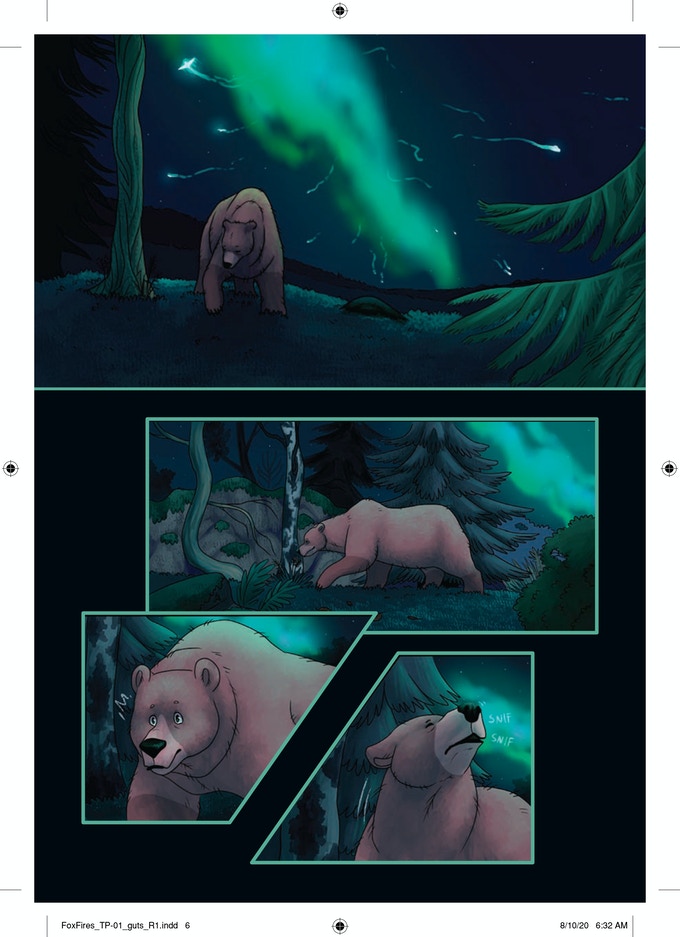 FS: With Fox Fires inspired by Finnish folklore, what made you use that as the basis for the series? What is your process in research for the series?

EPO: The motive behind choosing specifically Finnish folklore was that it’s very little known. Even the Finns themselves don’t know much about it. So it was time to give it a bit more audience. Of course, I’ve changed some small things to fit the story better; for example with the creature designs.

FS: How do approach the art and plotting process of creating a Fox Fires story?

EPO: Fox Fires is kind of like a collection of many little stories. The main character gets mixed up in all kinds of conflicts on her journey to the North. This gives the comic a bit of an episodic feel. But it’s my goal for every “episode” to be taking the main story forward in some way. Sometimes the episodes give more elements to the story, or they are strengthening the relationships between the characters. 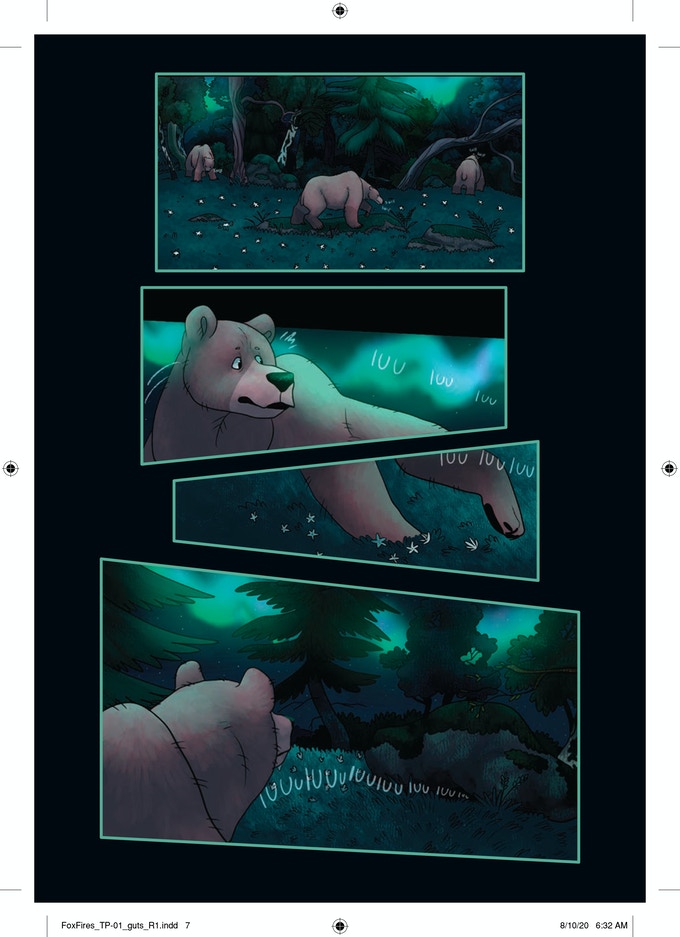 EPO: After almost three years of making this comic, it’s finally getting a physical book version! I’ve done some illustrations for books in the past, and seeing my art in physical form never fails to excite me. And now, a book that is not only illustrated, but also written by me, gets me even more excited!

FS: What can backers expect in terms of rewards?

EPO: I’ve had so much fun designing and creating the rewards for this campaign! I’ve created an exclusive poster (which will not be available again), a wallpaper for computers or tablets, a triptych poster collection, and some pins of the comic’s characters. We also have some stretch goals to be revealed and unlocked; for example a sticker and a poster. The add-on examples are a Fox Fires -themed coloring and activity book and a Raate plush! I’ve designed the items as something that I would personally like to show off or put on my own walls, so I’ve really put time and effort into them!

FS: For folks who are on the fence about contributing, what would be your pitch to them?

EPO: I’d say that this is a once in a lifetime opportunity, the Kickstarter for the first-ever book of Fox Fires can only happen once! Then, if you see someone owning the comic book later, you can proudly say that you were part of the group of people that made that comic book possible.

When I was a kid, I always wanted more stories about animals. I was betrayed every time I got a book about horses only to find out the book was really about the humans around the horse. I was simply so bored of everything being about humans. That’s why I decided that someday I will make my own story centered around animals, and here I am now, making a comic that the past-me would like to read. This world really has some space for more animal adventure comics! So this is your opportunity to be supporting one!

FS: What is currently going on in the current webseries of Fox Fires?

EPO: Fox Fires has been on a bit of a hiatus for the past month or so, specifically so I could work on this Kickstarter and my other work. But it’s returning again very soon! The story will continue where it left off: Raate and her friend Hiili the black cat have learned some truths about the mystical fire fox, Repo himself. That just raised more questions about the mystery. After spending a night in a Hiisi’s Castle, surrounded by these weird hiisi -creatures, they need to continue onward. What new dangers and mysteries are they facing next? We’ll find out soon!

The Kickstarter for Fox Fires is now live! Click here to find out how to contribute and get in on some fantastic rewards!