Comic book fans take a lot of flak for what is sometimes considered to be a juvenile pursuit. As many strides in acceptance of the genre have been made—in large part thanks to cross-media synergy in TV and movies—I think it would be fair to say that many among the masses see comic books as primarily for kids. Of course, this is hardly the case, as most fans are fully aware, but that stigma has haunted the medium since almost its inception. Hell, even I used to try to be apologetic for my love of the genre, especially in my early twenties. When a fellow college student would turn their nose up when I said that I was a huge Spider-Man fan, I hate to admit that I would deflect their derision by saying that I also read a lot of philosophical books and classic novels. (Oh, college Jed, you pretentious jag.)

However, there comes a point, as with many things when you’re reaching adulthood, that you don’t give a rat’s ass what others think of your hobbies. You come to realize that, ultimately, it doesn’t matter what you like as long as it makes you happy (unless you’re pulling a Buffalo Bill a la Silence of the Lambs, so stop doing that if you are). Happiness is so fleeting, so slippery, that if you can find a thing in your life that brings you joy in a cold and cruel world, then embrace it. And when that occurred to me, that was the moment that I decided to quit being a comic book apologist, to quit swallowing my words when I was asked if I loved comics. I’m a fan of the medium and probably always will be. And this is one big reason why:

We learn our lessons about the world, about right and wrong, from a variety of sources: experience, friends, family, philosophical and religious texts, and, yes, our pop culture. While this is a topic for another discussion, it’s an obvious truth that book companies, television conglomerates, movies studios, and comic book companies are, first and foremost, businesses designed to make money. They shape their products to get consumers to buy them. But that doesn’t mean we can’t learn from the books, movies, comics, and TV shows they produce. Somebody made cash off To Kill A Mockingbird, but that doesn’t mean that Atticus Finch can’t be one of my biggest role models in all of literature. The Rocky films are good popcorn films, but that doesn’t negate the fact that they also have an embedded message about getting up when the world has knocked you down. And while a Spider-Man comic book featuring the web-slinger fighting the Green Goblin might be eye candy, that doesn’t erase the message of responsibility to one another that bleeds through every tale of the wall-crawler.

Which brings us to Preacher #9. For the uninitiated, Preacher was a DC Comics/Vertigo title by writer Garth Ennis and artist Steve Dillon that focused on the Reverend Jesse Custer, who discovered through his bonding with an angel/demon hybrid that God had left his duties as Supreme Being by the wayside. Teamed up with his girlfriend Tulip and vampire buddy Cassidy, Jesse decides to travel the Earth to make God responsible for his dereliction of duty.

Early in the series’ run, Jesse and Tulip are kidnapped by his hateful bitch-crone of a grandmother and her hired help. While in captivity, Jesse comes clean with Tulip about the nature of his fucked-up family, recounting how he and his parents were held as essentially prisoners by his grandmother for years at her farm. His father John had had his fill of the crone’s machinations and decided that he and his wife and child would make a run for it under the cover of night. Jesse’s dad knew that the mission was a futile one, but he couldn’t sit back while his family’s spirits were trampled. And he was shot in the head in front of little Jesse for his troubles.

In issue #9, before the family made a break for it, however, John sat down Jesse to impart his last words of wisdom to his son should things go sour.

An’ you be a good guy, Jesse. You don’t take no shit off fools, an’ you judge a person by what’s in ‘em, not how they look. An’ you do the right thing.

You gotta be one of the good guys, son: ‘cause there’s way too many of the bad.

Now, you could have read that quote and thought, big fucking deal. That’s evident to anyone with half a brain. Be a good guy? That’s nothing brilliant or remarkable or revelatory. And what is doing good mean, anyway? What is the good? And you could dismiss the quote as funny book morality, black and white divisions in a world that’s becoming increasingly greyer by the day. 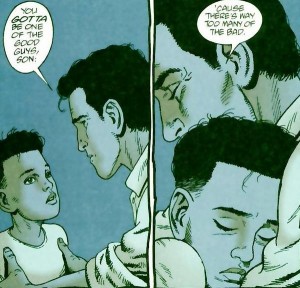 I suppose, though, that’s why the words from John to his son resonated with me on such a visceral, elemental level. This world is grey because so many people have let it become that way. They don’t see the value of one person trying to effect change, so they either don’t try or deride those who do. The idea of right and wrong has become so muddied that we don’t take the time to sift through the muck and the mire to acknowledge what ultimately matters: being kind to one another and doing right by our fellow man. In a folksy version of the Golden Rule, John Custer imparted the same message that Jesus and others like him gave to all of humanity: protect one another. See yourself in others. Do your part to stave off the darkness permeating the world. Be a good guy, because there’s way too many of the bad.

Thanks for joining me for another Flashback Friday, folks. If you get a chance to be a positive force in the world this week—carrying a bag of groceries for someone, being a helpful ear to a friend or a stranger—take that opportunity. It’s the greatest gift we can give to others and ourselves.

Also, for more Preacher ruminating, check out this article about the top stories of the series.