Gumby and his clay pals debuted on Howdy Doody 62 years ago, and have since provided a much needed joy and comfort to a world that often feels dour and gray. Whether you know Gumby, Pokey, and the gang from those early Howdy Doody appearances or in latter-day animated series such as Gumby Adventures, the green, flexible ball of joy has been a pop culture staple for decades. The cast of characters might be one of the most fleshed-out in animation history, with Gumby and his extended family and friends growing exponentially over time, introducing Gumby’s parents, pets, and siblings as the years marched on.

This week, Papercutz released Gumby: 50 Shades of Clay, collecting the publisher’s first story arc that debuted earlier this year, featuring a wide array of creators who contributed and brought their own mark on the Gumby mythos. We recently spoke with one of the collection’s writers, Jeff Whitman, about the timelessness of Gumby, his pony Pokey, and the rest of his clay pals. 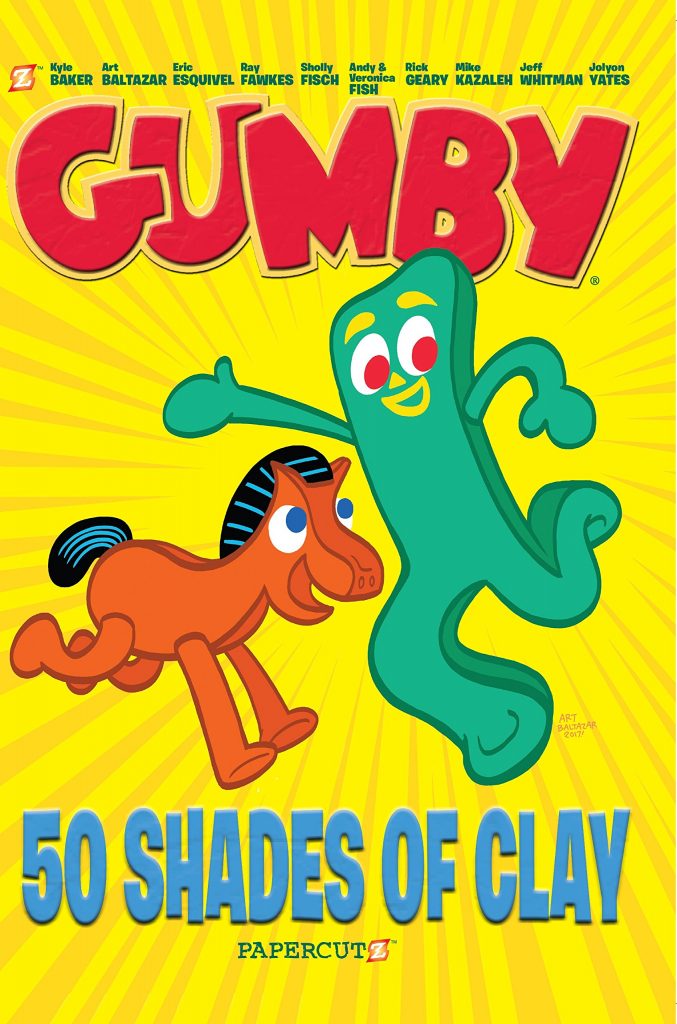 FreakSugar: So many of us grew up with Gumby and probably have our own gateway short or memory of the character. What was your gateway?

Jeff Whitman: My first memories of Gumby are scattered. He was syndicated on Nickelodeon Afternoon by the time I was a kid, so I remember loving the 80s episodes with the wide cast of characters (many of whom make appearances in this graphic novel, “50 Shades of Clay”). I must have rented Gumby the Movie 100 times on VHS and drove my poor mom crazy on a wild goose chase for the toys from the movie. I remember being on a camping trip as a young child, a guy had a Gumby windsock and made me cry because I wasn’t allowed to play with it. I now have an identical Gumby windsock hanging in my office window, so I like to think I got the last laugh there. 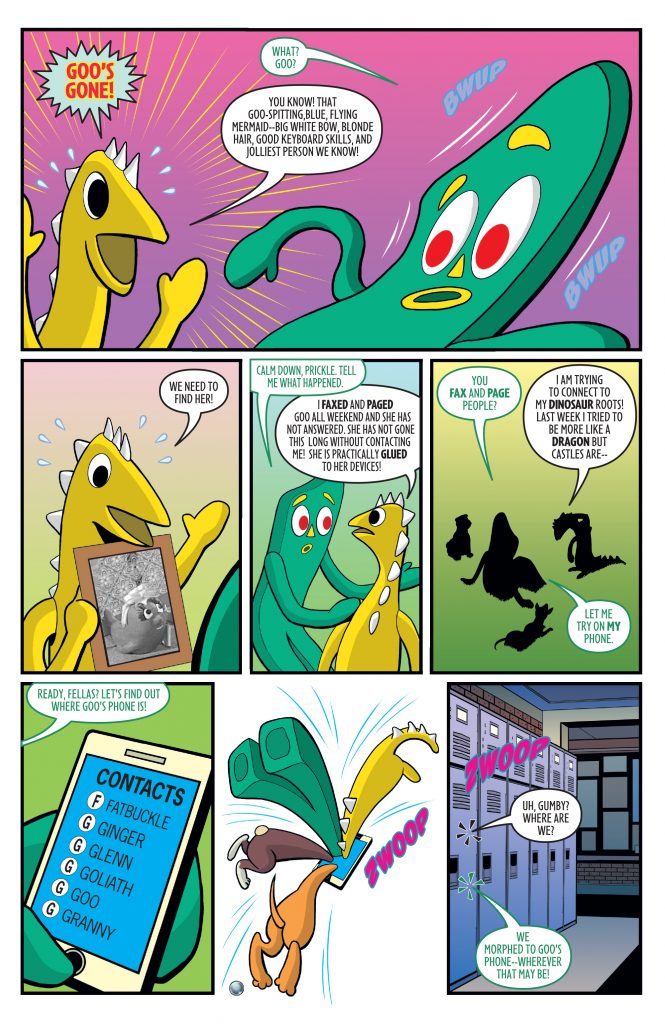 FS: You contributed several Gumby stories to the graphic novel. How did you become involved with the project?

JW: I never really grew out of my “Gumby stage.” At San Diego Comic Con 2015, I stumbled upon the Gumby booth and talked to Joe Clokey, son of the creator of Gumby. He was familiar with Papercutz graphic novels and had previously reached out to us. I helped “reconnect” so to say in a not so delicate manner, wearing Gumby shirts and costumes to the office and digging out my childhood Gumby collection and planting it on my desk in the Papercutz office. Editor-in-Chief Jim Salicrup got the message that I may be a Gumby fan and went to bat that I could tell a compelling Gumby story. Together, we looked for other creators who were also fans of Gumby and had a connection to the character. 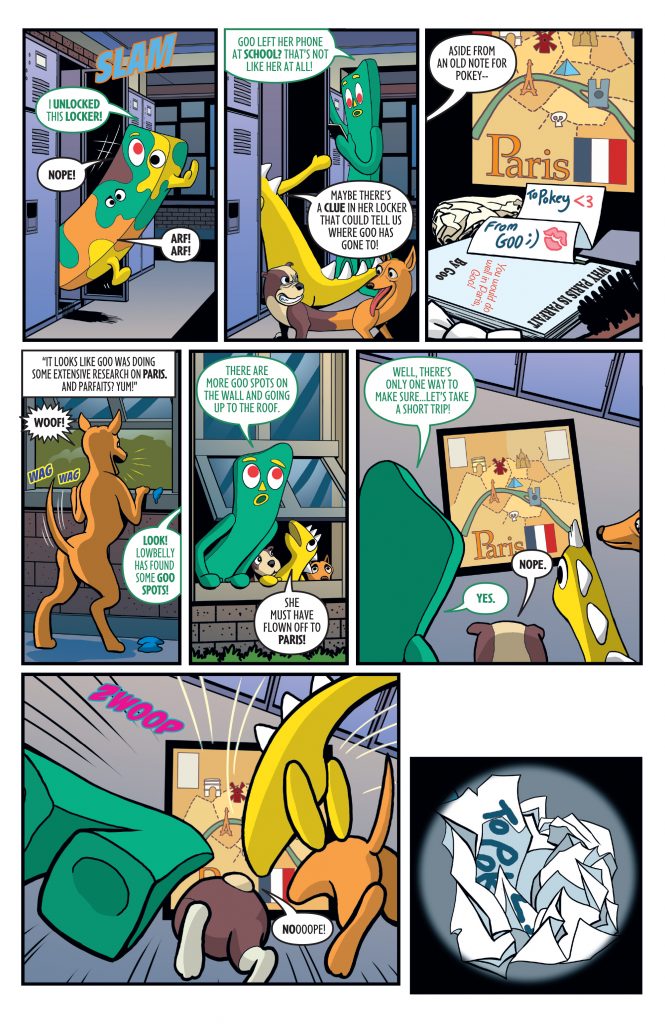 FS: There’s something about Gumby that’s refreshing in that—and please pardon the clay metaphor, I swear I wasn’t going for this—he’s moldable and pliable to fit so many different stories, but he still retains his same “stuff,” his same Gumby-ness. Is that a quality that attracts you to the character as a writer?

JW: Sure, Gumby can do anything! What really attracts me to the character is how willing he is to help. His world is not perfect. The Blockheads cause chaos, Pokey and Prickle can be wet blankets, and he has a dog that only says “nope.” But Gumby never loses his sense of adventure and hope. He always stays true to who he is, even if he can change his shape. 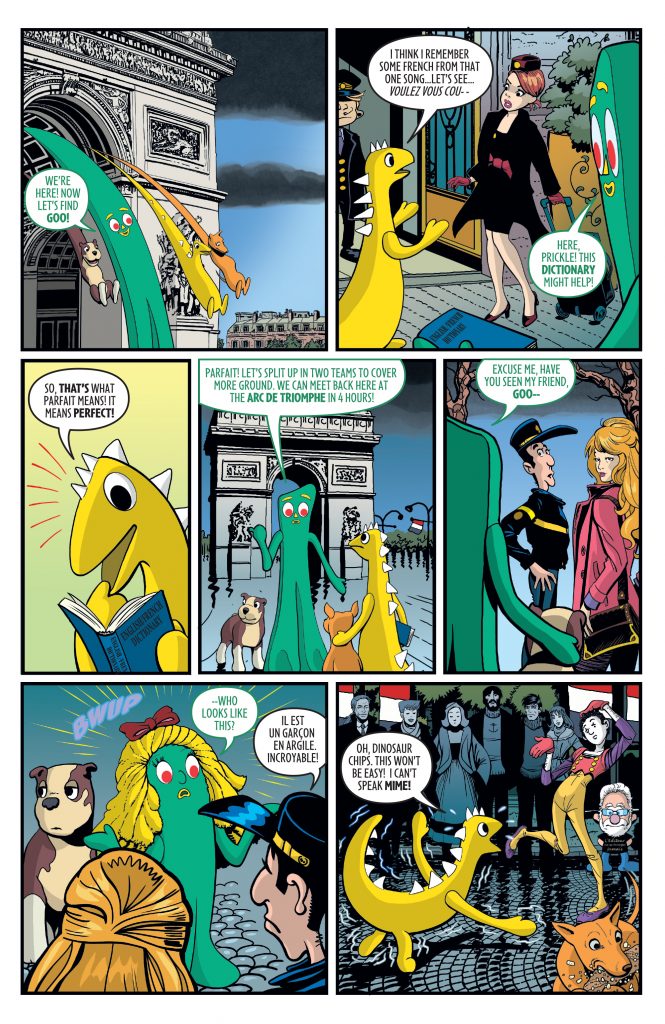 FS: You’re a big proponent of Gumby’s timelessness. How do you continue to keep the character’s charm and can-do spirit in today’s world, especially with all of the stressors kids (and adults) today face?

JW: To me, Gumby is a bit of a breath of fresh air in today’s landscape. He is that old friend that you haven’t talked to in a long time, and forgot how good it was to just catch up with!  In one of the stories in the graphic novel, “An Alien Abundance,” Gumby admits to gal pal Tara that he has had nightmares of these bizarre moon creatures since first encountering them way back in his first episode, “Moon Trip.” When they reappear in the story, Gumby tries to understand them better and befriends them. As his theme song states, “If you have a heart then Gumby’s a part of you.”

Gumby: 50 Shades of Clay is on sale now from Papercutz. The book truly is a joy–and an excellent idea for a holiday gift!

“I read the news today, oh boy.”— The Beatles

He was once a little green slab of clay. Gumby!

You should see what Gumby can do today. Gumby!

Captain America is a traitor to his country! Wolverine is dead! Batman is dark, man! You might have heard that it’s a tough time to be a comic book hero—and the real world news is even more grim. Enter: Gumby.

That’s right, Gumby is back! On November 7, 2017, leading kids graphic novel publisher Papercutz will release GUMBY “50 SHADES OF CLAY,” a new graphic novel featuring acclaimed cartoonists offering new adventures of Gumby and his pony pal Pokey. But is the world ready to welcome back Art Clokey’s innocent clay character that starred in his very own TV series 60 years ago?

“Gumby is timeless,” said GUMBY comics writer Jeff Whitman. “One of themes we wanted to explore in GUMBY ‘50 SHADES OF CLAY’ is that the character is, dare I say, evergreen but also absolutely relevant to today’s audience. Today Gumby is as optimistic, positive and helpful as when he first appeared, but he lives in the modern world, affected by the current societal issues that face us all. He is being challenged in new ways.”

Stories from comics creators such as Eisner and Harvey Award-winning cartoonist Kyle Baker; Eric Esquivel, Ray Fawkes, Sholly Fisch, Jolyon Yates, Jeff Whitman, Andy Fish and Veronica Fish — the acclaimed artist of THE WENDY PROJECT graphic novel —explore Gumby’s place in today’s world. In “The Sour Note,” by cartoonist Mike Kazaleh, Gumby and the musician Paul Plunk “come together” to commemorate the 50th anniversary of their fab first encounter, which seems like it was only “yesterday” (Paul Plunk first appeared in “Piano Rolling Blues,” which can be seen here: http://www.dailymotion.com/video/x494zb4 and on The Adventures of Gumby: The 60s Series Volume 2 DVD). While the two musicians (Gumby has his own band—The Clayboys) haven’t been together since 1967, Paul still rocks his signature mop-top haircut with his everlasting message of peace pinned to his paisley lapel. Throughout all the stories in GUMBY “50 SHADES OF CLAY,” Gumby’s character is tested by current issues, perhaps no more so than in “Green With Envy,” by Esquivel and Yates, in which Gumby’s girlfriend Tara becomes smitten with the lead singer of the punk band Grimey and the Sleazeballs. This pushes Gumby to emulate Grimey, which causes Gumby to take a walk on the Wild Side. Will an intervention by Gumby’s family and friends make him see the light?

“Whether you fell in love with Gumby’s classic TV show years ago or if you’ve always been curious about Gumby and Pokey, but never explored their world, GUMBY ‘50 SHADES OF CLAY’ is for you,” said Papercutz publisher Terry Nantier. “While some comic book characters have changed drastically with the times, Gumby has remained consistent, colorful, creative fun. His core of goodness, his heart, his innocence will never change. The world may’ve become a much darker place, but Gumby can deal with it. He’s Gumby, dammit!”