This Wednesday, Infinite, IDW’s big reality-jumping event running through two Jem miniseries, continues with Jem and the Holograms: The Misfits: Infinite #2, part four of the six-issue yarn. Written by Kelly Thompson with art by Jenn St-Onge, who supplied art on the previous Misfits miniseries, issue 2 explores the resistance that’s arising against the totalitarian JEMCORP in the alternate universe in which the Misfits and the Holograms find themselves.

Ms. St-Onge spoke with me recently about her involvement with Infinite, how she tackles an issue, and what projects she has rolling down the bend. 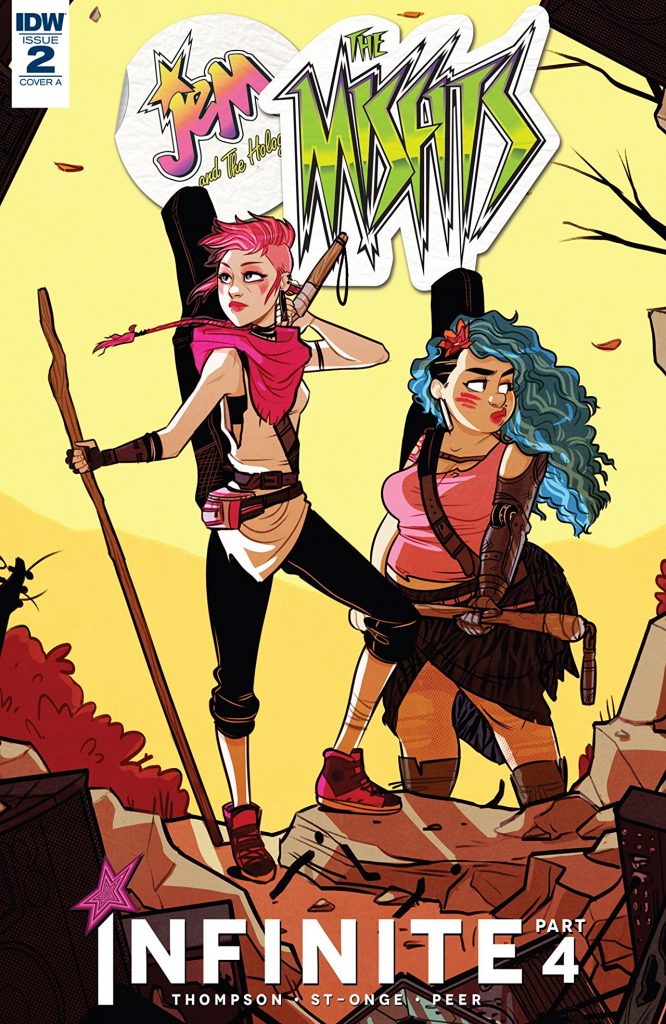 FreakSugar: First off, I thoroughly enjoyed your work with the Jem and the Misfits miniseries. I was thrilled to see you involved with Infinite! You’ve brought your own style to the Jem universe, combining what was in the cartoon source material with what we’ve seen in the various Jem series so far. Do you have any memories of the original cartoon that you pull from that inform your work?

Jenn St-Onge: I got into Jem a bit late in its life; I’d known of it as a pop culture phenomenon but only actually watched it for the first time a couple years ago when it was on Netflix.  On one hand I really loved it for its campiness but at the same time, I saw a story setup that was being squandered a bit because it was around before you had really serious kids’ cartoons the way we do now, especially for something that was made in part to sell toys. When I read the IDW comic, I saw an execution of this idea that hit a lot closer to what I wanted from Jem when I watched it, although I really enjoy both iterations! I think my biggest inspiration that I pull from the show to incorporate into my visual interpretation of the girls is giving the Misfits more personality traits than just mean. I love Pizzazz and, while I’m all for a good antagonist, I think there needs to be a softer side to those kinds characters too. It makes them a lot more fun to read and get involved with if you can see a bit more of their drive and motivation, and I think Kelly Thompson did a wonderful job with fleshing out Pizzazz and the girls.

FS: As I said, it’s heartening to see you working on the Misfits side of Infinite. How long have you been attached to the project and how did you become a part of it? Was it a matter of being a perfect fit, given your history with the Misfits in the miniseries?

JSO: I was almost done work on the Jem and the Misfits miniseries when it came up that IDW was doing Infinite. I was finishing issue 5 and for a bit I didn’t think much of the arc, but then it hit me that I really didn’t want someone else working on the Misfits when I hadn’t done that many issues with them yet; I’d spent a lot of energy creating a version that was respectful to what Sophie Campbell made but also something more my own, and it felt like there was a lot more mileage I could get out of them than just five issues. I spoke to Kelly and Sarah Gaydos (our editor at IDW) about the possibility of continuing a bit longer with Infinite and, despite a bit of a tight time-frame, we fortunately figured out something that would allow me to work on this arc too. 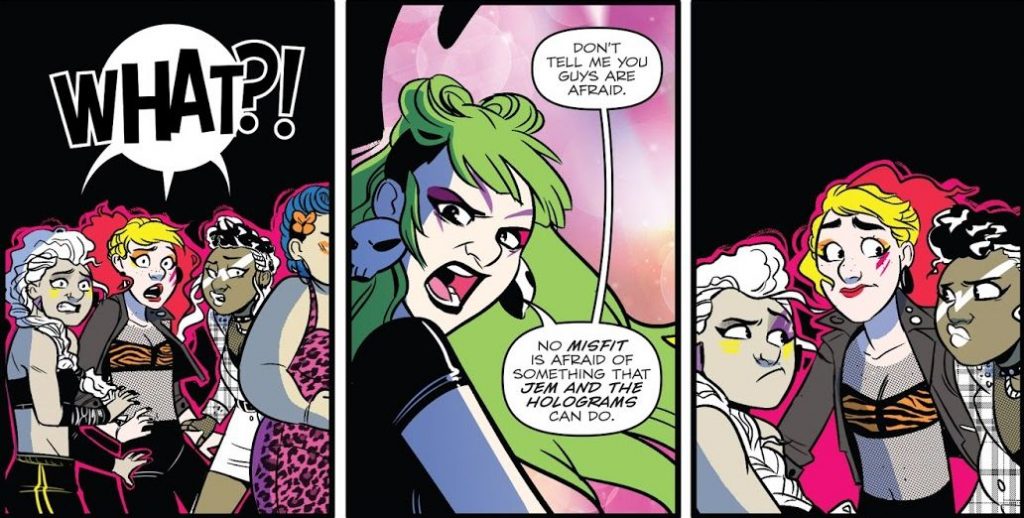 From JEM AND THE HOLOGRAMS: THE MISFITS: INFINITE #1

FS: A storyline like Infinite seems as though it would be a perfect opportunity to flex some creative muscles and put a new spin on Jem’s world. What was the process like working with Kelly Thompson and Jen Hickman in creating the alternate reality of Infinite?

JSO: Admittedly, sci-fi is not my strongest skill, so Infinite was definitely a new experience for me! Kelly had a pretty good visual idea of what she was looking for with the world and people we’d be creating, but also let me have free reign in my exploration of those ideas. It took me a bit to pin down what I thought would work for the aesthetics of the characters, both for fashion and hologram tech, and ended up going for more of a bourgeois evolution of the kind of showgirl Jem look, rather than just using like, 80s Jem outfits for everyone. I think there were a few directions we could’ve gone and that there was no one, “right” answer to the requirements; probably my biggest regret is designing 10+ very complicated, specific costumes for each band member and having to draw them repeatedly for the next two issues … clearly I am a glutton for punishment. Also, I feel I need to mention, Jen Hickman does amazing sci-fi designs, and makes it look so easy! I am very thankful for her work fleshing out the city settings more in her issues because she really did a great job.

FS: Following up on that, are there any alternate reality tales that have influenced how you approach your work on the story arc?

JSO: I’m sure I’m not the only one who is thinking of a lot of possible timelines for our world in the next 5-10 years, and I did try to apply that kind of sensibility to Infinite. This is a DARK timeline for the Jem-verse, so how do you imagine a world where everything has gone pretty much as bad as possible for your heroes, while still keeping a bit of hope and enthusiasm? I really latched onto the Stormer and Kimber of this world, sort of pouring all that bright, rebellious hopefulness into them despite their circumstances and pasts. Yes, everything has turned out for the worse, but they refuse to give up and still believe in a society worth fighting for. As much as this is a fantasy, it carries a lot of sentiments that extend to my feelings in real life, and I hope that comes across to people reading this arc.

From JEM AND THE HOLOGRAMS: THE MISFITS: INFINITE #1

FS: With a chance to play with the different looks in Infinite, were there any characters you were particularly eager to tackle?

JSO: I’ve been wanting to draw Techrat for ages! I really liked his character in Kelly’s script for this arc and I went a pretty handsome route for him, I just want to like, chill with non-holotech Techrat. I know this is a bit of a broad answer, but I didn’t get many chances to draw Jerrica and the other Holograms, so even though it was a bit challenging at time having everyone in a shot together, I also had a lot of fun drawing all of those characters, Kimber and Raya especially.

FS: You have such a fun, joyful art style and your sense of composition and panel choices are always spot-on. How do you approach a page or an entire issue after reading the script?

JSO: My process is usually pencil layouts for the entire issue, then once those are approved, tackling the inks in batches of five pages every week. I feel like I really benefit from knowing exactly what’s going on and where everyone is going to be in every shot, rather than working kind of blind on each fresh page; I try to set up each scene a bit like an animation, where I have a good 3D idea of the space they’re in and where/what everyone is doing at a given time. It also helps me plan energy levels as I go through different interactions, which might seem like a given but for me I feel need that planning stage.

FS: In that same vein, is there a particular headspace that you need to be in when tackling the characters of Jem? Is there music that helps you get in that zone?

JSO: I do need to be inspired, but unfortunately I don’t have the luxury of being inspired to work every day! I love Jem and I love making comics, but it can be tiring just staying on track and making sure everything I’m submitting is the same level of quality. Generally I try to look at each new page and find something specific that is going to be fun for me to draw, and use that to kind of pump myself up to fill the page around those spots; I usually look for things like expressive poses, fun performances, or cute interactions to get amped up.

For music, I have some higher energy stuff that I listen to, but mostly I listen to pretty chill, autumn-themed indie playlists on like, 8tracks. Lately I’ve been pretty into Immaculate Machine, First Aid Kit, the Decemberists, and Slow Club. I can’t count how many pages I’ve drawn listening to Slow Club’s entire discography haha.

FS: After you finish up your work on Infinite, do you have any other projects coming down the pike that you would like to tease?

JSO: I’m almost finished work on Bingo Love, which is my comic with writer Tee Franklin and Inclusive Press; the Kickstarter and pre-orders are currently closed, but I believe it will be available for general purchase early 2018. I also have a pitch with Magdalene Visaggio that got picked up and is kind of a Big Deal in my life but unfortunately can’t say much about quite yet. I have a few very magical things on the horizon that I feel are very on brand for me and am really excited to share more info on as soon as I can, because they’re very exciting opportunities!

Jem and the Holograms: The Misfits: Infinite #2, written by Kelly Thompson with Jenn St-Onge on art, is on sale this Wednesday from IDW.

The FIRST EVER Jem/Misfits Crossover Event continues here in ” INFINITE PART FOUR!” Outside the walls, free of JEMCORP synergy technology, a resistance is building, one led by none other than bandmates and girlfriends Kimber and Stormer!